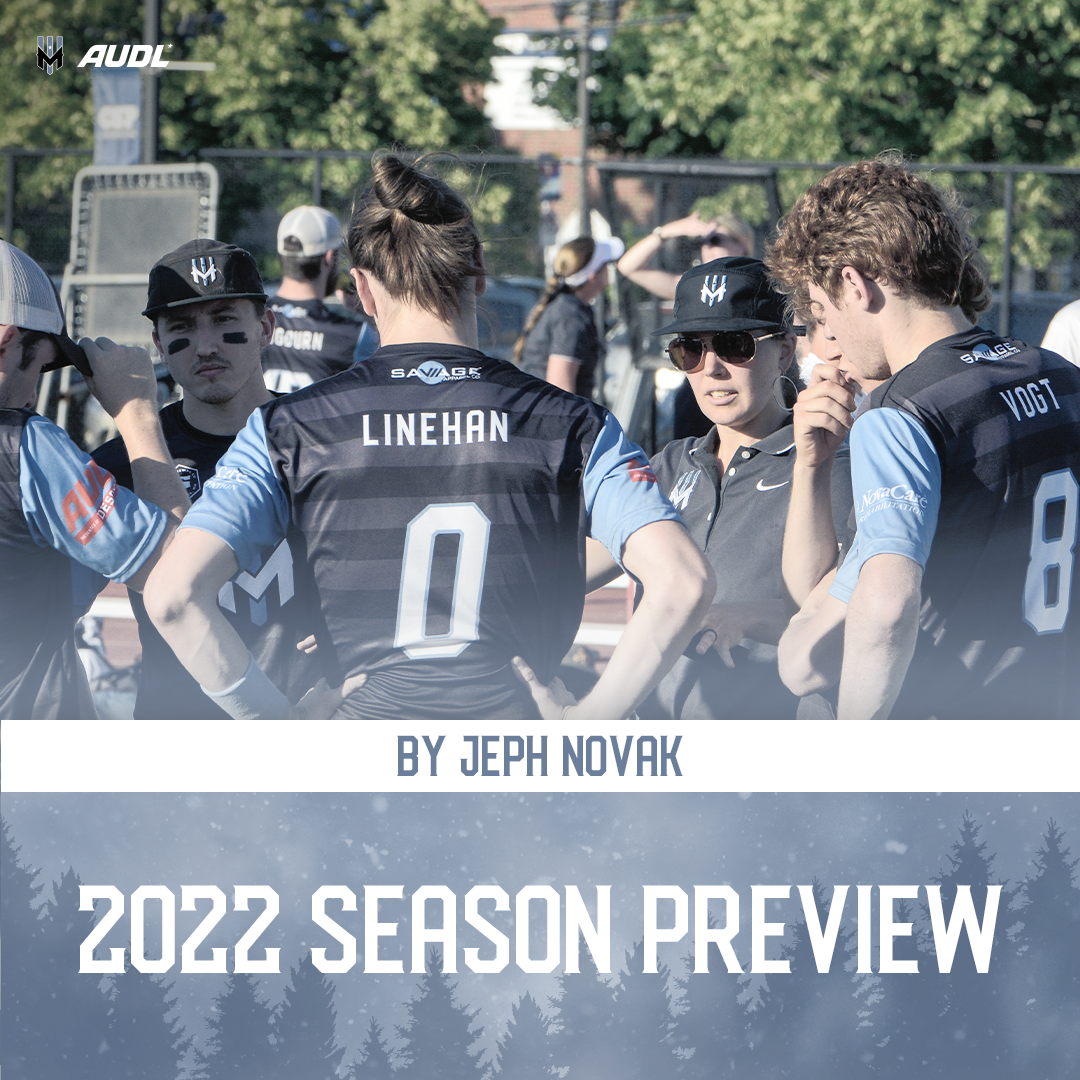 With the 2022 AUDL season beginning this week, the Wind Chill look to build on a 2021 season that was one of the franchise’s best. The team finished 10-2 last season, making them the Central division’s second best team behind only Chicago. But, after one of the best seasons in club history and following some notable offseason moves, the Wind Chill are eager to vie for the Central’s lone spot at Championship Weekend for the first time in 2022.

Here is what you can expect from the team heading into opening weekend.

Players to Watch For

The Wind Chill have a lineup that can compete with any team in the league. In 2021, both rookies and veterans worked to establish an identity that was aggressive, competitive, and downright impressive to watch. It appears to have only improved since.

This offseason, the Wind Chill signed contract extensions for two of their franchise staples—Captain Bryan Vohnoutka, who will be with the team through 2023, and Josh Klane, who committed to the club’s first three-year contract in January. Handlers Andrew Roy and Tony Poletto will also be back on the field for the Chill after great 2021 campaigns. The team will also return many defensive talents like Dylan DeClerck, Jimmy Kittlesen, and Colin Berry that helped propel the Wind Chill last season.

With a set of key additions to bolster an already effective roster, here are some players that will be exciting to watch for in 2022.

A huge move from the Wind Chill this offseason came in mid-December when they announced the signing of former Madison Radical, Rami Paust. Paust posted 37 assists and 15 goals in 2021. For perspective, his 52 total scores slightly surpassed that of Bryan Vohnoutka’s 51 (23/28 assist/goal split) last season. In addition, Paust was one of 12 players in the AUDL to record more than 2,000 throwing yards and 2,000 receiving yards last season. He adds a little more height than a traditional thrower, which should allow him to be both a downfield and backfield threat. Paust’s numbers against the reigning Central champion Chicago Union are also worth noting—with five goals and 14 assists in the series against the Union, he should play a valuable role in key games.

Abe Coffin has league experience with both Madison and Dallas, but will bring his impressive resume (which includes an All-AUDL nod and multiple Championship Weekend appearances) to the Wind Chill’s offensive line this year. Coffin’s ability to attack tight windows and chunk big yards equally well with his throws and cutting should compliment Minnesota’s offense nicely this year. Yes, he boasts impressive career scoring of 174 points (105 assists/69 goals), but his playoff experience may prove even more valuable to a Wind Chill team who has yet to get past the first round. Coffin has played in nine career playoff games, more than double that of any other active Wind. In addition to his offensive prowess, his big-game experience could bring a steady presence when the stakes get high.

Quinn Snider is a young Winnipeg player who will rejoin the Wind Chill this year after COVID-related border closures kept him sidelined for 2021. In just five AUDL games as cutter with the Wind Chill in 2019, Snider racked up an outstanding 29 goals. Snider is eager to get back on the field and prove his lofty potential.

“I feel extremely excited for this upcoming season,” said Snider. “It’s been a long two years, and I’m very excited for the opportunity to take the field once again with the Wind Chill for a full season.”  He added that he hopes to focus more on becoming a dual-threat cutter this season—adding more assists and expanding his roles on and off the field.

It will be interesting to see how the flow of the team changes with Snider back in the mix— especially with new teammates like Andrew Roy, Rami Paust, and Cole Jurek.

Speaking of, Cole “Beef” Jurek is another player who could build off of an impressive 2021. In his first full season in the AUDL, Jurek recorded the most receiving yards (2,442) and the second most total yards in 2021 for the Wind Chill. His 21 goals show that Jurek was valuable downfield and managed to find open space in the end zone. Like his teammates Brandt and Linehan, Jurek showed up with confidence on the field—he wasn’t afraid to look deep, which was an exciting change of pace for an offense that was very possession-oiriented last season. On the flip side, with 12 throwaways and a huck completion percentage of 77%, Jurek may need to reel in his decision-making a bit—something that will come with more experience in the league and trust in his team. Now with a full season under his belt and another year of experience, there is a lot to look forward to when Jurek is on the field this year.

In his Wind Chill debut, William Brandt showed poise rarely seen by a 19-year-old rookie. At Madison in week one, he scored two goals, added three  assists, confidently showed off cross-field hammers, and made plays in the end zone that mirrored a seasoned veteran’s confidence. He ended 2021 with an astounding 95.92% completion rate on 235 completions with 1,276 throwing yards. That said, Brandt’s role appeared to be pretty safe last year—he was used most in the red zone (as shown with his 19 assists) or as a second or third reset handler used for resets. But, this was critical to the success of his teammates, as evidenced by his  14 hockey assists (the throw leading to the assist) last year. As a rookie working on developing his role with the team, Brandt was an underrated support piece for his fellow handlers. Going into his sophomore season, it will be interesting to see how Brandt’s role and skills fit with different combinations of players and lines.

Rocco Linehan flew under the radar for much of 2021, despite his impressive ultimate background (which includes a gold medal at the World Flying Disc Federation Championships in 2019). His field vision and cut timing made him one of the better slice-and-dice players in the league last year, and he backed it up with 42 total scores on the season. Linehan also added five blocks, which proves his versatility. As a true hybrid option in both roles and lines, Linehan shows the potential to be an excellent addition to the team’s defensive units—helping earn a block and lead the counterattack on break opportunities—especially as a player who isn’t afraid to take risks.

In addition to the players, a couple other key factors could help elevate the Wind Chill to their first Championship Weekend appearance in 2022,

The Minnesota Wind Chill’s offense often ranks among the best in the league. Last year, they recorded a total of 280 points and had the league’s fifth best offensive efficiency. And to support this impressive offensive cast is a unit of accomplished but underemphasized defense. In fact, the team finished third in blocks and defensive efficiency among all AUDL teams last year. Minnesota’s defense consistently makes impressive plays, and players like Dylan DeClerck are looming defensive presences on the field. Last year, DeClerck was the league’s block leader (23) and flustered opposing offenses along with teammates like Bryan Vohnoukta, Jimmy Kittlesen, and more.

With the on-paper depth of this year’s Wind Chill roster, the team can afford to cross over players in key moments during games. Players like Linehan, Vogt, Jurek, or Coffin could provide needed firepower to help force a turn in pivotal moments.

Adding some offensive threats to Minnesota’s defense would likely also help improve the conversion percentage—often the difference in those important games that tend to go down to the final buzzer. Bolstering an already impressive defensive unit with excellent two-way players could put even more pressure on opposing offenses—and ultimately seal games.

Home-field advantage makes a big difference in the AUDL. Fan presence could certainly help the team win big games this season as well.

Not only is experiencing the energy of a Wind Chill game unmatched, the team thrives on the energy and support from the home crowd at Sea Foam Stadium.

“That roar from the crowd after a goal is infectious, and their cheers can easily change the momentum and outcome of a game at any given time,” Snider said.

With the season beginning this week for the Wind Chill, there is plenty to build off and look forward to.

A combination of exciting new players, the hopeful resurgence of some of the franchise cornerstones, and the depth and flexibility of the overall roster make the 2022 season outlook a promising one.

And another incredible fan base at Sea Foam Stadium to help experience it will be the icing on the proverbial cake.

If you’re interested in experiencing the atmosphere of a Wind Chill game this year and seeing what the team is all about, buy tickets today!