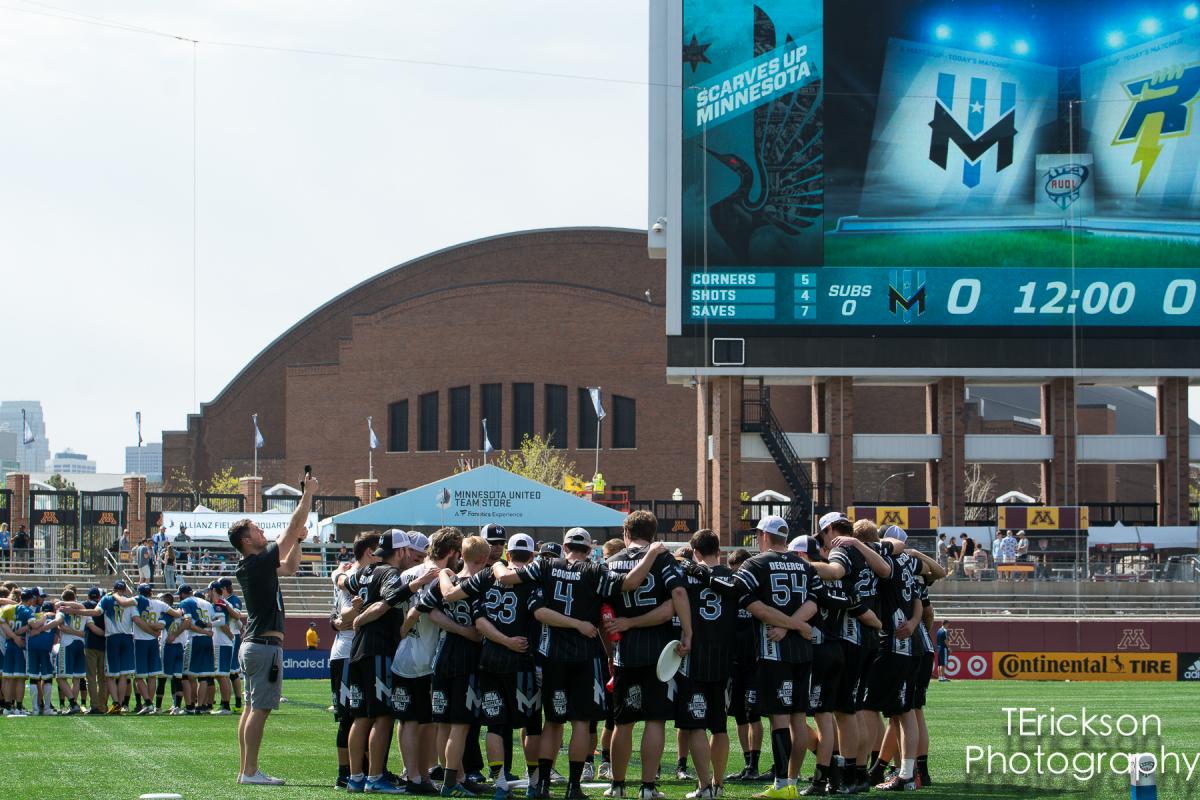 The Minnesota Wind Chill fell 20-19 to the Madison Radicals in a tight back and forth game at TCF Bank Stadium.

In the first game of it’s kind, the Minnesota Wind Chill played at one of ultimate’s largest venues. The Wind Chill squared off against the Radicals at TCF Bank Stadium following the Minnesota United’s 1-0 win over the Vancouver Whitecaps. The venue is also the current home of the University of Minnesota’s football team and the former home of the Minnesota Vikings.

On playing in TCF Bank Stadium, new head coach Erin Mirocha said “Apart from the logistics of warming up offsite and being at the whim of the prior contest, it was a fun experience. There were some variables that needed to be considered by both teams the way sound carries, stadium wind, hydration, but we try to inhabit the same headspace regardless of venue and I think we accomplished that.”

The game was tight as both teams showed offensive consistency. Minnesota earned an early break but Madison got it right back. In the first half, we saw great plays from Minnesota’s Josh Klane and Jason Tschida, slicing through the Radicals’ early zone looks. Early in the second quarter, Eric Johnson sliced a hammer through the Radicals’ zone that got the crowd on its feet.

Near the end of the half, Minnesota was moving downfield on offense looking to go up 2 going into halftime. A dropped disc caused the drive to stutter, ending a point that would have given Minnesota all the momentum going into the second half.

The third quarter was the difference in the game this week. The Radicals went on a 6-3 run that put them in the driver's seat for the rest of the game. Minnesota made mistakes, dropped discs and made poor decisions that they’re going to wish they had back. Minnesota can compete with this Radicals squad but first, they need to get out of their own way.

The Radicals’ zone defense worked out in the end. Minnesota threw 420 passes while the Radicals only threw 226. With so many extra throws, more turnovers were inevitable in the swirly stadium conditions.

On the team’s third-quarter performance Mirocha said, “We got a little impatient and had a few miscommunications.  Madison got some momentum going in the third and capitalized. We left some breaks on the table and took some unnecessary risks.  There are definitely some moments I'd like back, but we'll take those lessons and use them to drive us forward. In the fourth, we asked some players to step up on different lines or in slightly different roles, and we asked more of our sideline.  We were looking for more of an energy catalyst than a tactical change at that point.”

Klane and Tschida continued to spread the disc around offensively but weren’t as efficient as they needed to be going against one of the best teams in the league.

Minnesota clawed back in an extremely exciting fourth quarter performance. As the game was winding down they were hoping to be in striking distance of a tie by the last point. They played well, and they scored late in the game to make it a one-score game, 20-19.

Tight defense on the final point afforded Minnesota a late turnover which gave them the chance they needed. Down a goal with 2 seconds left, the Wind Chill called a timeout to strategize a final play.

With the disc near midfield, the Radicals placed 6 defenders in the end zone and put one defender on the mark. The clock started, Jason Tschida quickly swung the disc to Josh Klane who released a massive huck towards the end zone. Minnesota had its chance as the crowd rose to its feet but the disc fell harmlessly to the turf.

Josh Klane led the team in assists with 4. He also added a goal to his performance. Bryan Vohnoutka led the team in goals with 5 and Jason Tschida was the engine of the team with 107 completions and 3 assists.

On her first game, Erin said “It's a great opportunity that comes with a lot of work and a mysterious amount of visibility.  I'm just trying to keep my head down and prepare as much as I can so the players can focus on performing well.”

On looking ahead and making adjustments, Mirocha said “We have plenty of things to work on at practice to re-invest in ourselves and what we can do both as individuals and a unit.  At the heart of it, we need to control what we can control and focus on ourselves. I'm not ruling out tactical adjustments just yet. I'm still processing.”

The 1-2 Minnesota Wind Chill will look to bounce back next week against the 0-5 Detroit Mechanix. BUY TICKETS HERE! Both of Minnesota’s losses have been by a combined total of 2 points.