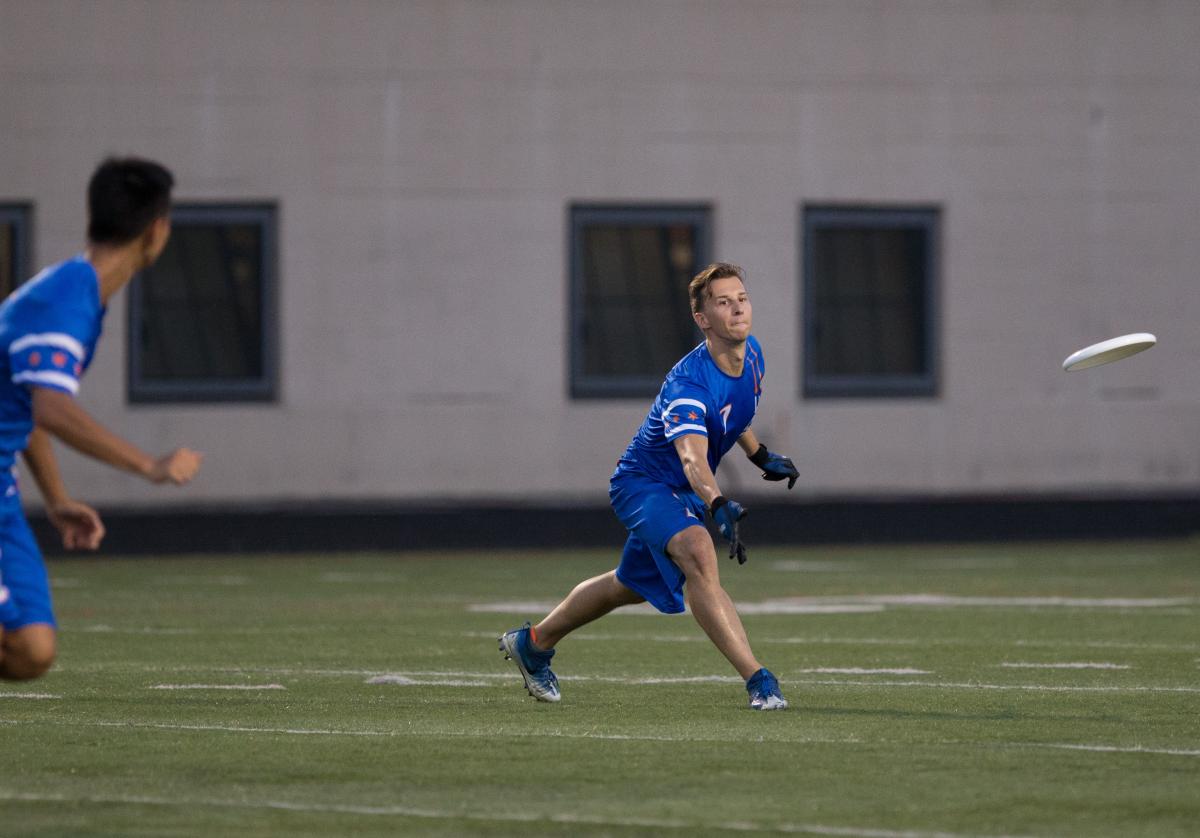 To watch Dave Woods play ultimate is to observe a person enraptured by the moment. But joy is his default setting, whether he’s grinding on the field, crushing his professional endeavors, or cutting a rug on the dance floor. As head coach, Dave will use that magnetic positivity to guide Wildfire through its most ambitious campaign yet.

Dave joined the team in 2016 and, over the last three seasons, established himself as a crucial defensive ingredient playing whatever role was needed. Going into the 2018 season, Wildfire’s management asked him to play an entirely unexpected role: Assistant Coach. This move was part of a long-term continuity plan to replace outgoing coach Adrian King. Dave apprenticed last year, while also playing, and matriculated into the Head Coach position starting in 2019.

Chicago Wildfire are well on their way through the preseason checkpoints with Pawel Janas, Tommy Gallagher and Ross Barker filling out the captaining crew. Coach Woods’ role is to coalesce this triumvirate and shepherd the team towards defined objectives.

This starts in the preseason with outlining broad ambitions and themes for the year. Then he must map strategy, practices, checkpoints and personnel to those goals. Who should play on the O line? What’s the best allocation of practice time regarding skills-n-drills vs strategy vs scrimmage reps? What defensive schemes are essential to have perfected by the first game? Can someone just throw 65 yard hammers over Madison’s zone?

Dave, give us some perspective on the transition from player to coach.

The transition from player to coach is daunting. But I think anyone who's started a new role, job, career, etc. knows the anxiety that can accompany the transition. While I have past coaching and leadership experience, I've never coached at this level. I was fortunate to serve as Assistant Coach for one season under Adrian King but wish I'd gotten more time to soak up more of his knowledge. Fortunately, the 2019 Wildfire has a group of extremely talented and dedicated captains. These guys have already put in so much time and thought into their vision for the 2019 Wildfire. I just hope to help guide and manage their talents and implement some tactics behind their energy. Expect to see some big things this season.

How you will shape future Wildfire?

I would love to help make the Wildfire a venue where people become future leaders. I think one of the best things you can do as a leader is to guide others to discover their greatest potential and eventually surpass you. I mean, that's really the true measure of a leader, isn't it? I encourage all my players to come to me with ideas that help the organization off the field. If someone has a passion for strategy, or film review, or even marketing, I want to encourage that passion and grow their talents. In a short time, we should have a well-oiled machine of extremely talented players—both on and off the field. A rising tide lifts all boats. Let's set sail!

Adrian King dd an amazing job during his time as coach and left the Wildfire in a position for growth. It's important during any management change that the leadership leave in place things that are working well and address areas that need improvement. This is how I’m approaching my first head coaching season with the Wildfire.

My outlook as a leader is to leverage the talents of those around me in areas in which they are passionate. We are fortunate to have a very strong group of captains this year who are already giving so much to the team. I want to make sure I'm getting as much from them as possible.

Anything near the lake in Chicago—beach volleyball, the dog beach, simply going to the beach. There's also something magical about running/biking on the Lake Shore Trail along downtown Chicago with skyscrapers and a busy city on one side of you, and the vast blue expanse of Lake Michigan on the other. Also, anything with music. I love to get down.

What good books have you read recently? Or, what excites you outside of ultimate?

I'm currently reading, "The Devil in the White City." I'm enjoying learning about the history and growth of Chicago and the talent of the architects that built the city in one chapter, and then being completely bewildered and terrified the next.

Outside of ultimate, I get excited by the creative talent of others. There's so much art that one can experience in Chicago. You can find live music here literally EVERY night of the week and there's amazing art around every corner.

I enjoy being in shape. But I like eating more.

The best thing anyone can do as a player is to perfect their fundamentals. I know this sounds bland or obvious. But whether it's pick-up or a playoff game, one can immediately identify the players that have solid fundamentals. This is what I've always attempted to master and fall back on. Everything from simple throws at different elevations to the angle the disc is at when being received.

I think this ultimately plays into my individual comparative advantage. I try to never turn the disc over. There's nothing worse than getting the disc on defense only to turn it over in a few passes. Basically, I'm going to do whatever I can to play defense as little as possible. And that means ensuring that passes are completed and only taking smart shots.

I also try to play selfless. If you look at my stats, I have a number of touches with few scores or assists. I'm the give-and-go type. I'm basically a cog within the machine—and I'm fine with that as long as we get the score. As long as we get the W, that's the only stat that matters.

Trying out/playing with a club team between college semesters is one of the smartest things that any young player can do. I remember that was when I first realized that I wasn't as great of a player as I'd previously thought. I played with a club team in St. Louis that taught me new offense and defense schemes, new drills and practices. I gained an entirely different approach to the game. The second time that happened was the summer after college when I moved to Kansas City and tried out for Prairie Fire. Again, I learned what it took to play on an elite roster.

Basically, players should take every opportunity to experience new teams and philosophies. Always go in with a learning mindset.

Master your fundamentals. Then, play outside of your comfort zone as often as you can (eventually you'll be comfortable playing anywhere). Never stop learning.

Put serious emphasis on your training—And then equal importance on recovery and stretching. Pay attention to what you're putting into your body so that you can get the best out.

Make sure to give equal importance and improve other areas of your life. Teams love recruiting well-rounded people.

Do whatever you can to stand out at any tryout. Anything from wearing a bright, obnoxious jersey (or even a jersey of an elite club team that you didn't actually play for) to taking on the top returning talent in matchup drills. Don't get lost in the noise. Having nothing written next to your name on evaluators' clipboards at the end of a tryout is the worst fate any team-hopeful can face.

As an advertising writer, everything comes down to messaging. It's not about using a bunch of words, it's about using the right words to communicate your message. Communication is a central theme for the 2019 season. I am not the most vocal person or leader, which is something I'm working on. I want to make sure that I'm always sending the right message to the team—from sideline shouting to emails—through clear, concise, and timely messaging.

Also, I am going to work to be the biggest hype man the Wildfire has ever seen.