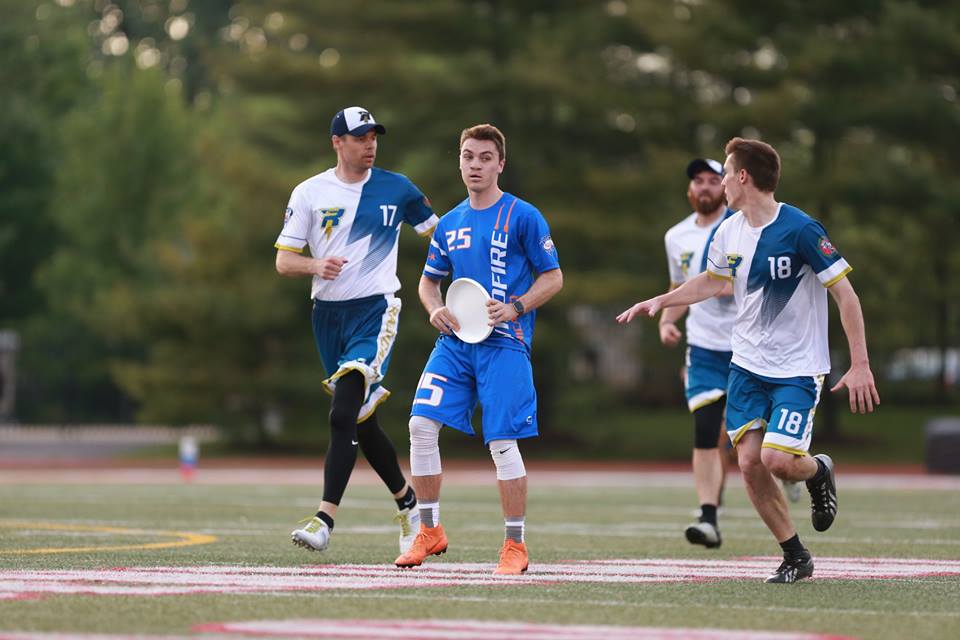 As a lifelong athlete, Ross Barker possesses a learned understanding of what it takes to excel in sports. His rigorous training routine and earnestness not only bring success on the field, but also garner admiration from teammates and leadership alike, as evidenced by his 2017 Callahan nomination from the University of Wisconsin Hodags.

After wrapping up his final season with the Hodags in 2017, he helped the Madison Radicals on their run to the Midwest Division title. Oh, and then he won a U24 world championship with Team USA.

He joined the Chicago Wildfire in 2018. His addition to offense brought another reliable cutter capable of chewing up yardage and reeling in hucks from Pawel Janas and Kurt Gibson. Last season he caught 45 goals and threw 35 assists.

Going into his third year in the league, and second on the Wildfire, Ross has big plans for what’s ahead. “My goal for the 2019 season is to win every single home game and build a stronger fan base here in Chicago.” he said. “We are going to need the help of our fans, and the more energy they give, the better we will play.”

My favorite pastime was playing basketball growing up. I competed against my two older brothers who also excelled in basketball. It was fierce and helped shape me as the competitor I am today. My dad built us a basketball hoop with a double rim with a chain net, and a light above it so we could play in our alley at night. Even when I return home now I will go outside to shoot and hear the chain net as the ball goes in the basket.

What good books have you read recently? Or, what ideas excite you outside of ultimate?

I recently read 3 books that I thoroughly enjoyed: Astrophysics for People in a Hurry by Neil DeGrasse Tyson, Man’s Search for Meaning by Viktor E. Frankl, and Sapiens by Yuval Noah Harari.

Astrophysics for People in a Hurry was one of my favorite books. I love learning about the cosmos and the underlying physics that our universe abides by. I am actually going to see this British physics’ professor named Brian Cox perform in Chicago in May. He will talk about the cosmos and fascinating discoveries from the Large Hadron Collider. There will be a giant display that amasses the entire stage and will have the highest resolution ever on the planet. They specifically had to build a super computer to accommodate the resolution.

Man’s Search for Meaning is written by Holocaust survivor Viktor Frankl. He describes what he believes the purpose of life is, and how even while being in the concentration camps, he found meaning and a will to live. It is a powerful book.

Sapiens is very eloquently written and makes you think about homo sapiens in ways you wouldn’t have imagined before. I highly recommend it for anyone who wants to explore the history of our species and theories explaining why we became the prime species that was able to escape the food chain.

I like to continually educate myself and I swear the more I learn about life, the dumber I feel.

I take everything I learned from other sports and the art of competition, and I use that to fuel my success. It is more a mental war than it is physical. When I am on offense, I constantly analyze my defenders’ hip positions, and put myself in a position to have full control over that. If I need to cut deep, I make sure I turn their hips under first while I explode going deep. This gives me those few feet of initial separation that allow me to get open at will. I attack with an understanding of field space and my defenders position within that space.

I always run my hardest, but I believe my best attribute is getting open and my throwing fakes. I firmly believe I have the best fakes in the AUDL.

I had amazing ultimate players & coaches teach me the techniques and knowledge of the sport. When I came into tryouts as a freshman at UW-Madison I didn’t know a single thing about the sport. I was the guy who had to ask what they meant by a ‘force.’ But, 6 years later I’m still in the formative moments; there’s still so much that I must improve on to be the player I want to be.

As cliché as it is, I have worked really hard to get to where I am at right now. I constantly work on my explosiveness and speed, and persistently improve my throws. It’s crucial to be meticulous about throwing form and technique in order to be more efficient and consistent.

Never give up! Also, be sure to lift weights. I know so many ultimate players that didn’t start lifting weights until they were already 5-6 years into the sport. Start right away. That’s how you become a better athlete and dominate your competition in physical battles. There are only two things that you ever need to concern yourself with while you play: Effort & Attitude. Those are the two variables you ALWAYS have full control over. If you have those set at 100% every time you play, everything else will take care of itself. You won’t have to worry about the scoreboard, and you won’t have to worry about regret.

This is a long list and I feel every name had a major impact on my ability in this sport. Each of them spent countless individual hours with me helping me refine my throwing technique and/or increase my ultimate IQ. I am forever be grateful to them. So because of that, I feel I need to include all my mentors in this list:

I always work on refining my throwing skills. This is an insatiable quest that I will be on my entire career.

Intensity and competitiveness are natural for me but, as a captain, I want to improve on my compassion and friendliness while on the sideline.