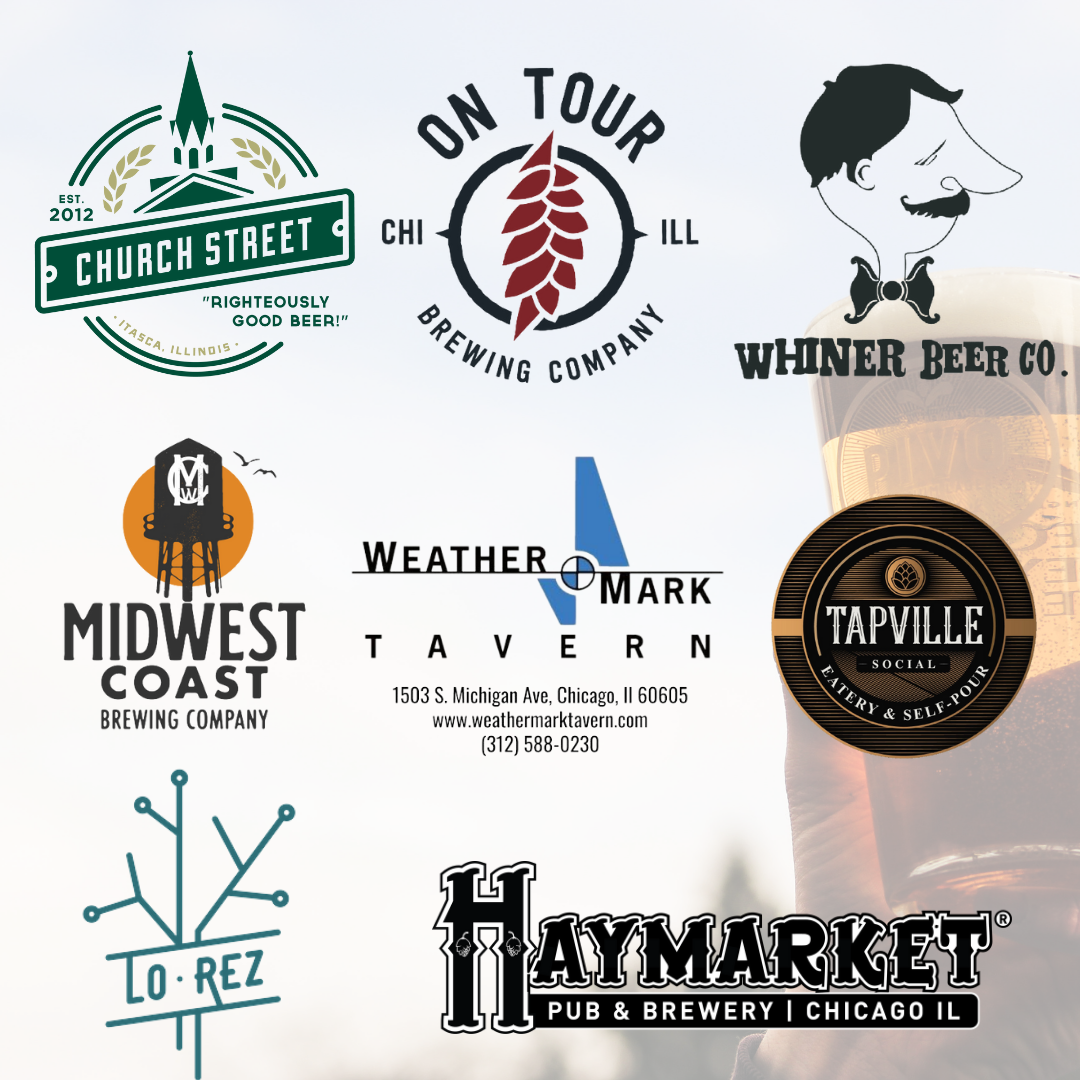 Hello fans of the Chicago Union, beer, having a good time, or all of the above -

We have rounded up some cool brewery and beer experiences for our 2022 season! Check them out below!

It was founded in February of 2012 after Joe Gregor’s son decided that his father needed a new hobby and bought him a home-brewing kit. Joe enjoyed brewing beer and became so good at it, that he began to research starting his own brewery.

They not only host weekly live music, food trucks, and free event spaces but they also sell award-winning craft beer.

Church Street Brewery will be featured at out Home Opener on Sunday, May 1st!

HAYMARKET PUB & BREWERY -- Haymarket Pub & Brewery is a small, honest, and loyal business that gives a nod to the 8-hour workday, going out of their way to help people and promote good causes.

Haymarket Brewing Company is named after Chicago’s Haymarket Square, where the world famous Haymarket Affair took place in 1886. This labor protest helped lead to the creation of the eight-hour work day and the annual May Day celebrations that take place around the world after numerous demonstrations, riots, and bombings took place on May 4, 1886.

Come on down to Haymarket Pub & Brewery on West Randolph St in the west loop, the official destination for watch parties for all Union away games this upcoming 2022 season!

To find out more about Haymarket Pub & Brewery, click here.

Haymarket Pub & Brewery will be featured at College Night on Friday, July 1st.

LO REZ BREWERY & TAPROOM -- Lo Rez Brewery & Taproom located in the Pilsen neighborhood started in a garage like many great bands or tech start-ups do - just two dudes riffing on new recipes, inspired by classics such as Duvel and Old Rasputin.

Founded in 2015, Lo Rez Brewery & Taproom began brewing traditional styles that they wanted to drink and introduce their friends and neighbors to. As their skills grew, so did their appreciation for creating something tangible that brought people together.

Making beer allowed them to create something with their hands that also connected them to the community. They went low-res as a way to go back to old world craftsmanship, connect friends and neighbors, and make traditional beer for a modern world.

Their goal is to create great beer that draws inspiration from traditional styles, modern ideas, the highest quality ingredients, and local partnerships. They believe that beer should be balanced in a way that highlights all of its ingredients yet tastes greater than the sum of those parts.

Drawing on centuries of brewing tradition and styles, they work relentlessly to build upon and add to the shared foundation of flavors, aromas, and expectations of what beer is.

Through experimentation with fruits, spices, and other flavors, they aim to extend the flavor profile of beer while always asking themselves “could I drink a second pint of this?”

From harvesting hops at their neighborhood community garden to brewing with locally roasted coffee, they source malts, hops, yeast, and fruits from some of the best growers and producers in the world, laying the foundation for the most flavorful and varied beers possible.

They are BYOF (Bring Your Own Food!) but they also have snacks and often local popups available.

To find out more about Midwest Coast Brewery, click here.

Midwest Coast Brewery will be featured at Heroes Night on Saturday, July 9th.

ON TOUR BREWING COMPANY -- On Tour Brewing Company is a warehouse-like microbrewery and tasting room, pouring house-beer and offering canned beers to go.

Owner and Founder, Mark Legenza, a third-generation Chicago native and his wife Amanda moved to Denver in 2009 where he became obsessed with perfecting unique and delicious beer recipes in his custom built mini-brewery.

During his eight years in Denver, Mark’s passion for home-brewing grew and after advancing to the final rounds of the 2013 and 2015 National Homebrew Competition, Mark and Amanda decided to see the dream of “On Tour Brewing” become a reality.

Together, they packed up their belongings and drove from Denver to Chicago to build his vision of a place where people can take a break and press pause over a cold, flavorful pint.

To find out more about On Tour Brewing Company, click here.

On Tour Brewing Company will be featured at Chicago Sports Night on Friday, June 10th.

Enjoy an extensive list of craft libations that include rotating varieties of craft beer, wine, and hand-crafted cocktails. Serving up American classic menu items with a twist - the recreation of favorites with unique ingredients and flavors.

Order a menu item at your convenience from a table-tablet, experiment by sampling various craft libations from their self-pour taps, and use their express check-out when your visit is over.

To find out more about Tapville Social, click here.

Tapville Social will be providing all the various alcoholic beverages at each of our home games.

WEATHER MARK TAVERN -- Weather Mark Tavern is an essential part of the Chicago Experience. It’s been featured on WBBM Radio and named the best Fish Fry by CBS and Huffington Post, in addition to being Chicago’s #1 Nautical themed bar, it also boasts one of the cities largest Rum collections at over 50 bottles!

It is an outstanding destination for lunch, dinner, meeting up with friends, throwing a party, or just grabbing a bite to eat, located just minutes from the Field Museum on Michigan Avenue and it is also conveniently located just a short walk from De LaSalle Institute where all of Chicago Union’s home games will be taking place this upcoming 2022 season.

Come on down to Weather Mark Tavern in Chicago’s south loop, the official post-game bar for the upcoming 2022 season!

To find out more about Weather Mark Tavern, click here.

WHINER BEER COMPANY -- Whiner Beer Company located in Chicago’s ‘back of the yards’ neighborhood aims to promote environmentally responsible brewing and to make beers for people with a wanderlust palate, a curiosity for the strange and unknown, and those who take their beer seriously, but never themselves.

Their focus is on barrel-aged beer, a tradition common in Belgium and France that is gaining a foothold in the U.S. Industry.

To find out more about Whiner Beer Company, click here.