A life lesson: sometimes things just don’t go your way. After leading 11-7 at halftime, the Sol were defeated by the San Diego Growlers 21-17. This was the Sol’s first loss at home this season, and as such the SOLar Eclipse is going to look different than the allegories of past. So for this week, it is worthwhile to reflect on the past wins and the journey from the 18-out-of-19th team in the preseason rankings to being in the conversation for Championship Weekend.

A goal the Sol has had all season is to practice “egolessness.” Captain Evan Swiatek introduced this at the first minicamp. The main idea is that on a team of superstars there is no room for playing the hero. Instead, each player on the roster and partner within the organization, needs to do what is best for the team and the program. And this is not to say that Sol players—from rookies to four-year veterans—have not had their highlight-reel moments. But the plays are always made for the team, never the individual.

Speaking of some of those plays, this past weekend’s game had many. Sol veteran Bob Lewis had massive foot block in the first half that led to an early Sol break. Sol rookie Connor DeLuna made a shoulder-high dive at the end of the first half to give the Sol a four-goal lead. As he seems to every game, Vinay Valsaraj had a huge layout block during a long point to regain possession for the Sol offense. And last but not least, Austin native (and fan favorite) Hayden Stone flew in for a layout block to retake possession for a Sol score. 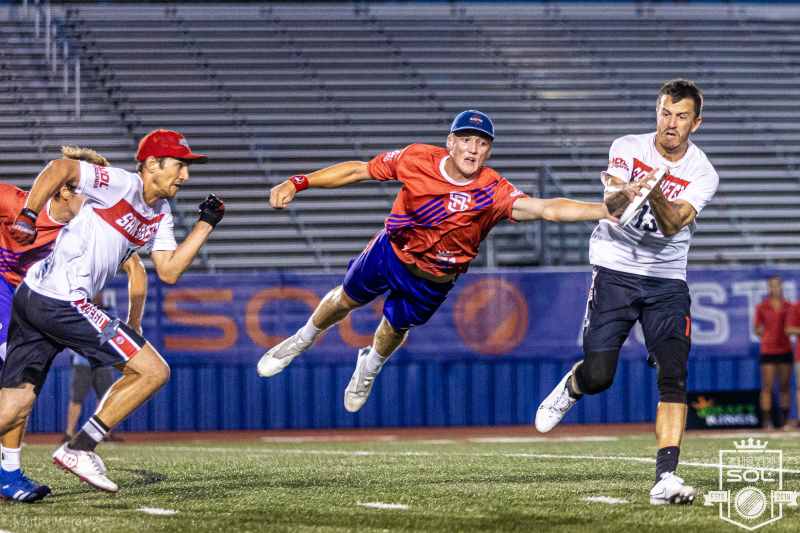 As they have the whole season, the Sol fans lit up our stadium with cheers and support even when San Diego took the lead. Shirts seemed to be optional to some fans, as friends, family, and locals all showed out to support their hometown boys. Whether watching the stream from home or pressing themselves up against the front-row fence of the bleachers, our fans stuck with us to the bitter end of this hard-fought game. The egolessness preached through practice is not only limited to playing for your teammates, but also realizing that this represents the best fan base in all of the AUDL.

The AUDL season is far from over, and the Sol’s hopes of Championship Weekend are still well within reach. As a team full of competitors, the Sol will not forget this loss. In fact, watch in the next weeks as a reinvigorated Austin team continues to rock the boat and shock the world.