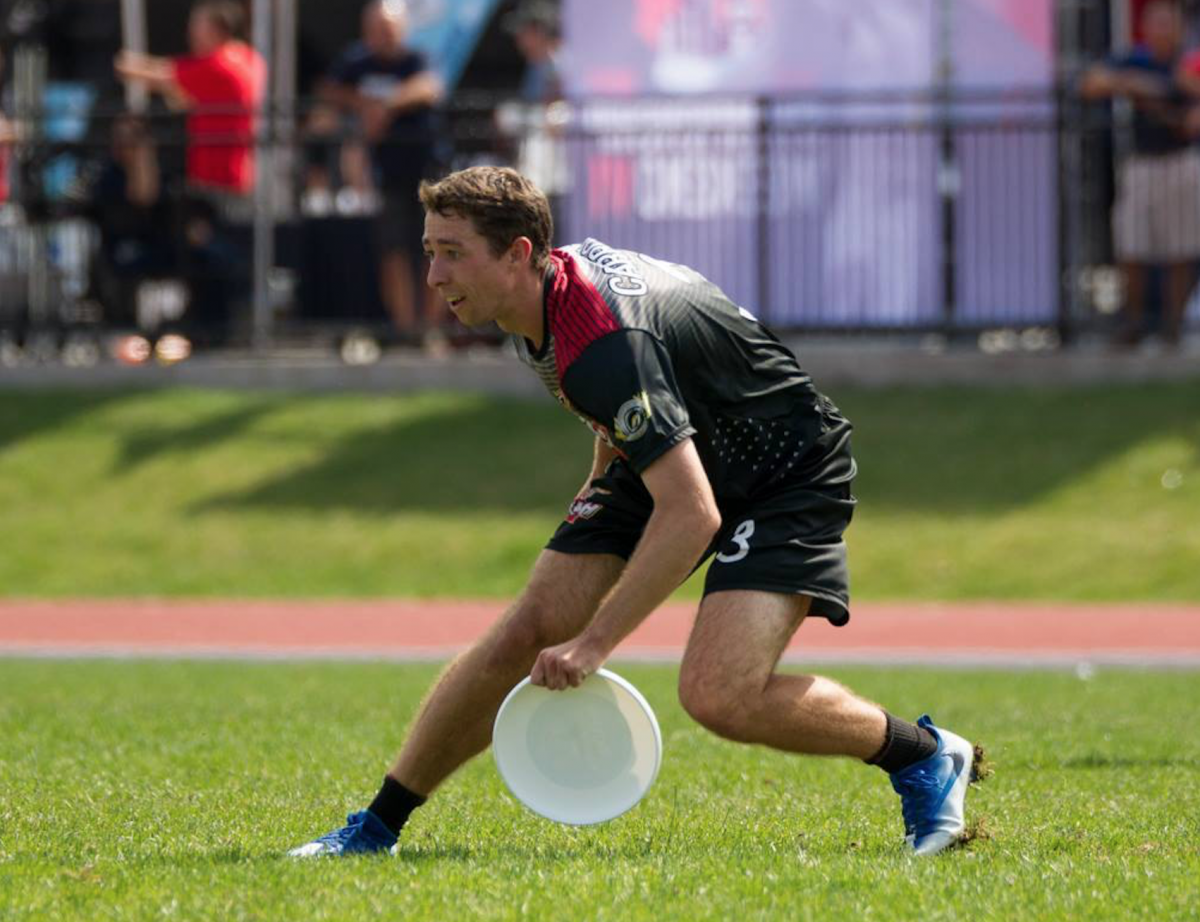 For a player who wants to avoid Frisbee fame, Andrew Carroll is working hard to bring that uncomfortable state to fruition. The winner of the 2017 Ultimate Canada Male Player of the Year Award may not enjoy the spotlight, but the support Carroll’s received from the community has at least been enjoyable:

“There's some people I know that reached out and said congratulations. That part was pretty cool, because I have a lot of respect for the people I've played with, obviously. Some people maybe I didn't know as well, which was really cool to see.”

Despite Carroll’s almost-constant desire to credit his teammates and coaches for his success, the award is well-deserved. Carroll couldn’t throw a disc before he started playing at Lakeview High, but he earned playing time because of his talent on the D-line. Carroll developed his skills during a Bachelor’s and Master’s degree at Queen’s University before moving to Toronto and joining Rush / GOAT.

Despite his blazing speed (particularly when changing directions), Carroll actually preferred getting his playing time on the D-Line instead of playing offence until quite recently: “If you asked me a year ago, I would have said [that I prefer] D-Line. I didn't like the pressure that came with O-Line. Countless guys can tell you stories about how I used to even try to avoid playing O.... As an O-Line [player] you can only lose the game for your team.”

No matter how good a player is on the defensive line, it’s hard to earn the reputation of dominant offensive players; offenses simply score most of the points. But Carroll’s talent couldn’t be kept off of Rush’s or GOAT’s offences for long, and his breakthrough season in 2017 occurred simultaneously with his shift to the offence: “I like being able to dictate on O, I like setting my own terms... As of 2017, I'd say I prefer O.”

Instead of guarding the world’s best players and working like a maniac while on the field to stop them, a newly-reinvented offensive Carroll could choose when to run. Carroll became a problem for defenses all the world over.

And was 2017 ever good to Carroll as a star and captain of Rush. In a regular season win against the eventual-champions San Francisco Flamethrowers, Carroll single-handedly amassed 14 of his team’s 33 points. In a rematch with San Francisco in the finals, Carroll notched 4 assists and 2 goals during the close loss. During the season, he led the team in goals with 48, though he only played in 12 of the team’s 18 games. He finished 12th in the league in goals per game (4.1), despite playing on an egalitarian offence that refuses to emphasize a single player’s advantage. His season-long dominance culminated in Carroll winning a spot on the all-AUDL East team.

Andrew Carroll earned AUDL Player of the Week honors for his performance against the FlameThrowers in Week 12 of 2017.

Carroll is more than a Rush player; in fact, Danny Saunders, the Executive Director of Ultimate Canada, mentioned that the AUDL season wasn’t even taken into account for this award. Carroll represented a mixed Team Canada in Poland, helping the team earn an impressive third-place finish, including wins over powerhouse programs Japan and Australia; he led the team in scoring. As a captain of GOAT, he led the Toronto-based club to gold in the Canadian Ultimate Championships in Saskatoon. At USAU Nationals, he led GOAT with the most goals (13) and second-most assists (8) over the tournament.

More than a dominant cutter on the field, Carroll has transitioned into an outstanding team leader. Always quiet, Carroll exemplifies the lead-by-example mantra. Team strength and conditioning coach, Mike Haddock, confirms that Carroll is one of the hardest working players on the team, quick to correct a teammate’s faulty training technique. He speaks up on the field occasionally, and he’s even recently begun return some of the chirps he’s been hearing years now. He still only trash-talks teammates. (He feels bad for making fun of his teammates, even though he is far more often the victim of friendly fire).

Off the field, Carroll spends his free time volunteering at school camps and clinics to help spread Ultimate to younger generations. Alongside teammates Jeremy Norden, Adrian Yearwood, and others, Carroll will be an integral part of the AUDL’s partnership with cancer research charity, Early Recognition Is Critical. He always finds time to dedicate to Toronto’s Ultimate community, even if his only reward is seeing the sport of Ultimate itself benefit: "[Running camps and clinics] started as the Rush building up, and trying to help them get schools out to games and grow the sport. At the end, the real focus was just growing the sport… I can’t help but feel that this sport is on the verge of becoming very mainstream."

And so Carroll is earning a name for himself internationally as a terrific player who always upholds the Spirit of the Game. The future is bright for Carroll, although he may have to grin and bear it for the next several years; his recognition in Ultimate is only just beginning. ​