Strong start to the season | AUDL
Skip to main content

The Royal's 2018 season started with a road trip to Washington to play a single game against DC Breeze. The team was supposed to play against Phoenix from Philadelphia' on Sunday as well, but due to the bad state of the field (natural field), the game was postponed to a later date. Players and trainers will be adding a trip to their already booked schedule, as they will be playing their second match of the season in Philadelphia on Saturday, April 21st, 2018.

Weather conditions were difficult in Washington as the bitter cold and winds were taking their toll at the Catholic University's stadium, home of DC Breeze. Many had frozen fingers and wore toques. Royal's players were well prepared and had several outdoors training and impromptu throwing sessions as well. In this situation, Quebec's cold spring was a fortunate enemy.

Eight rookies participated in the game, including Morgan Hibbert, Cam Burden and Esteban Ceballos, three athletes who came from far away to play for the Royal. Morgan really liked his experience: "What an exciting and amazing first game. I was really impressed by the eight who played with so much poise out on the field. I didn’t even know they were rookies 'til after the game, since they played like seasoned vets. They really led the charge early on, energy wise, and helped carry us through till the end when our legs started to fatigue from the long travel that day. This victory is a great starting point for us to continue building from."

Every good coach knows the importance of starting the games with strength and intensity, and that's exactly what team Royal did by breaking through DC Breeze’s lines four times in the first quarter and taking the lead 7 to 3 towards the end of it. Coach Cadotte said: "I am glad the team started the season on a high note. Being able to take advantage of our opponent's mistakes and play our defense properly from the start of the game is what we want for the whole season. We also have a lot of depth allowing us to have the energy up to the end of the game to apply our aggressive style of play." With a bit of humour, she also added: "That being said, it is just the beginning! We need to work hard."

Team Royal managed to keep its lead by working a stable and calm offensive during the next two quarters. At the end of the third quarter, Royal was ahead by a comfortable five points. However, such a cushion can quickly disappear. DC Breeze had some good attack sequences and controlled the disc much better in the fourth quarter. On team Royal's side, fatigue from the trip was satrting to be felt and decisions were somewhat affected. We observed some unforced errors, slips, floating throws or throws to covered players as well as hasty throws. Washington came within two points, but team Royal held on and went home with the win, 24-22.

Mike Voelpel finished top scorer with five (5) goals and Steve Bonneau made the most assists with five (5) points as well. Malik Auger-Semmar got the most defensive with two (2). And the most used player was Miguel Goderre with 22 appearances and 29 minutes of playing time. Francis Vallée and Quentin Bonnaud kept a 100% efficiency with the disc having respectively completed 18 and 19 passes without any turn-arounds.

This season promises to be very exciting, so don't miss the opening game at Complexe Sportif Claude-Robillard on Saturday, May 5th. 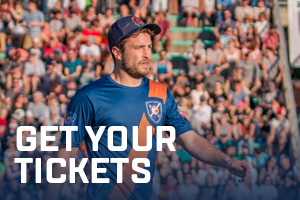