There are five weeks and exactly 55 games remaining in the 2022 AUDL regular season, and as the calendar flips to July this Friday, it’s clear that the month ahead should set the stage for a tremendous playoff picture.

In Week 9, only two of the nine games were decided by one or two scores, but it was still an interesting landscape full of surprises and history. We saw the winningest AUDL franchise suffer its largest loss ever, and we witnessed an ironic pair of West Division doubleheaders: the 5-1 team went 0-2 on the road, while the 1-5 team went 2-0. 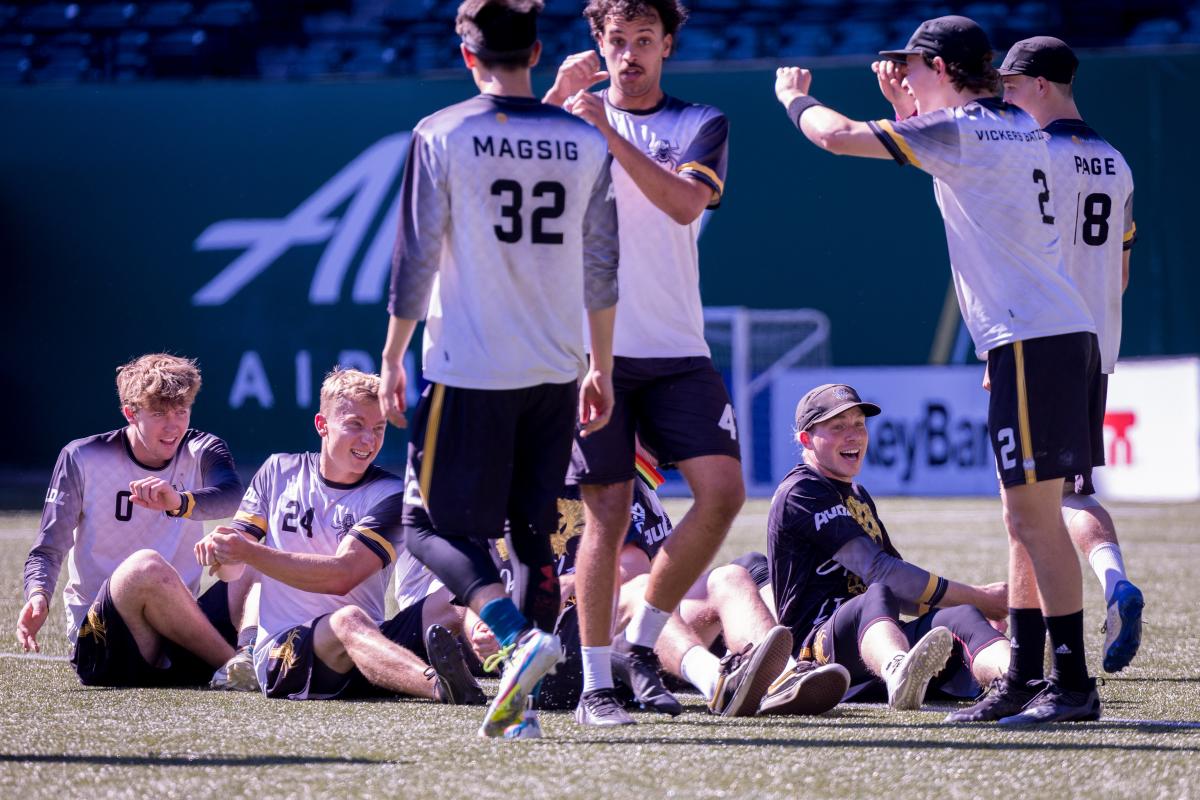 Perhaps most significantly, we saw Colorado and Chicago both remain undefeated, and with 9-0 New York idle in Week 9, we still have three teams with perfect records as we move into the final month of the regular season. The Summit and Union were both tested on Saturday night, but both had all the right answers in the moments that mattered.

The road to Championship Weekend ends in Madison on August 26 and 27, meaning that we are exactly 60 days away from crowning the next AUDL champ.

Among the three undefeated powers that are still pursuing perfection, Chicago’s quest has been by far the bumpiest. But to their credit, the now 6-0 Union have repeatedly made the plays at winning time over their past three games. On June 10, they needed a Jeff Weis-to-Ross Barker bomb with less than 30 seconds left to break the tie against Madison. Seven days later, they trailed 14-10 in the third quarter against Austin before boomeranging the Sol with a 9-2 rampage en route to their 24-21 interdivisional triumph.

Chicago needed yet another comeback this past Saturday at Indianapolis, trailing 22-20 with less than seven minutes left in the fourth. As usual, playing inside their climate-controlled venue, the AlleyCats offense was tough to stop, and the Union were running out of time.

“AlleyCats played a very clean offensive game,” said Chicago’s Nate Goff. “As always, it was hard to generate turnovers on their offense indoors. They only made four or five mistakes the entire game offensively.”

But one of those mistakes came with Indy up 22-21 and just over five minutes left. Cameron Brock bolted away from Goff, who knew immediately that he was burned on the up-line slash. But that’s when Chicago’s Reid Martin made the play of the game.

“I was beat to the cone by Brock and asked for a roll, but instead [Martin] was able to stuff the push pass,” said Goff. “It was a total momentum swing from that point on.”

Indeed, Barker's majestic flick huck for Weis tied the game at 22. Then former AlleyCat John Jones delivered a sensational soaring block in the end zone against former teammate Levi Jacobs, leading to Kyle Rutledge’s cross-field missile for Charlie Furse, vaulting the Union ahead 23-22 with two and half minutes remaining. About 45 seconds after that, Goff’s diving interception set up another Chicago break-chance, which Goff’s diabolical diagonal hammer paid off, giving the Union its first multi-goal lead of the game.

Brock skied for another goal to bring Indy within one with 51 seconds left, but the Union successfully bled the rest of the clock with a dozen clean completions to cap their 24-23 comeback win.

“There were definitely mixed emotions after the game,” said Goff, who finished with two assists, one goal, and one block. “Personally, I was ecstatic. The defense made three key blocks at the end that were able to secure us a win on the road. I have played on many teams with lesser goals than ours and have learned to celebrate every road win you can get, especially against a team that played as clean as the Cats. The offense was less happy; they know they must be better.”

For their second straight game, the Union’s late defensive pressure was the difference, but the AlleyCats also felt that their fourth-quarter downfall was somewhat self-inflicted.

“Most of the momentum was swung by our own errors first,” said Indy’s Lucas Coniaris, who paced the AlleyCats with 42 completions and 385 throwing yards. “When I think of the turns that happened in the fourth, many of them were Chicago making plays on mental errors or throwing mistakes. I floated a routine leading pass, which enabled John Jones to make a spectacular layout block in the end zone.”

Chicago improved to 4-0 in games decided by three or less, while Indy dipped to 1-2 in their closest games. Overall, the Cats fell to 4-3, but they’re still a half-game ahead in the race for the Central Division’s third playoff spot.

It seems clear that the AlleyCats will be battling the Madison Radicals for that postseason berth, though the Rads looked more pretender than contender on Saturday in St. Paul. Whereas Madison scuffled with end-of-quarter issues in narrow setbacks against Chicago and Austin, the Radicals were resoundingly outplayed by Minnesota, who handed Madison the franchise’s largest margin of defeat ever. The Wind Chill led 4-0, 11-3, and coasted to a 22-11 rout on a blustery night for ultimate.

“The wind itself was a gusty crosswind, so the inconsistent breezes really made throws or catches that should be routine a little trickier,” said Wind Chill Captain Bryan Vohnoutka. “Just when you were about to attack the disc, the bottom would drop out or it would pop over you.”

Whereas Chicago and Indy combined for 25 turnovers in their indoor environment, Madison and Minnesota created nearly three times as many, with the Wind Chill holding the Madison offense to just eight scores in 38 possessions. Minnesota’s disc movement was far from pristine, but the Wind Chill navigated the conditions to the tune of 12 breaks in 29 opportunities, holding the Radicals to just three goals in the game’s first 21 minutes. 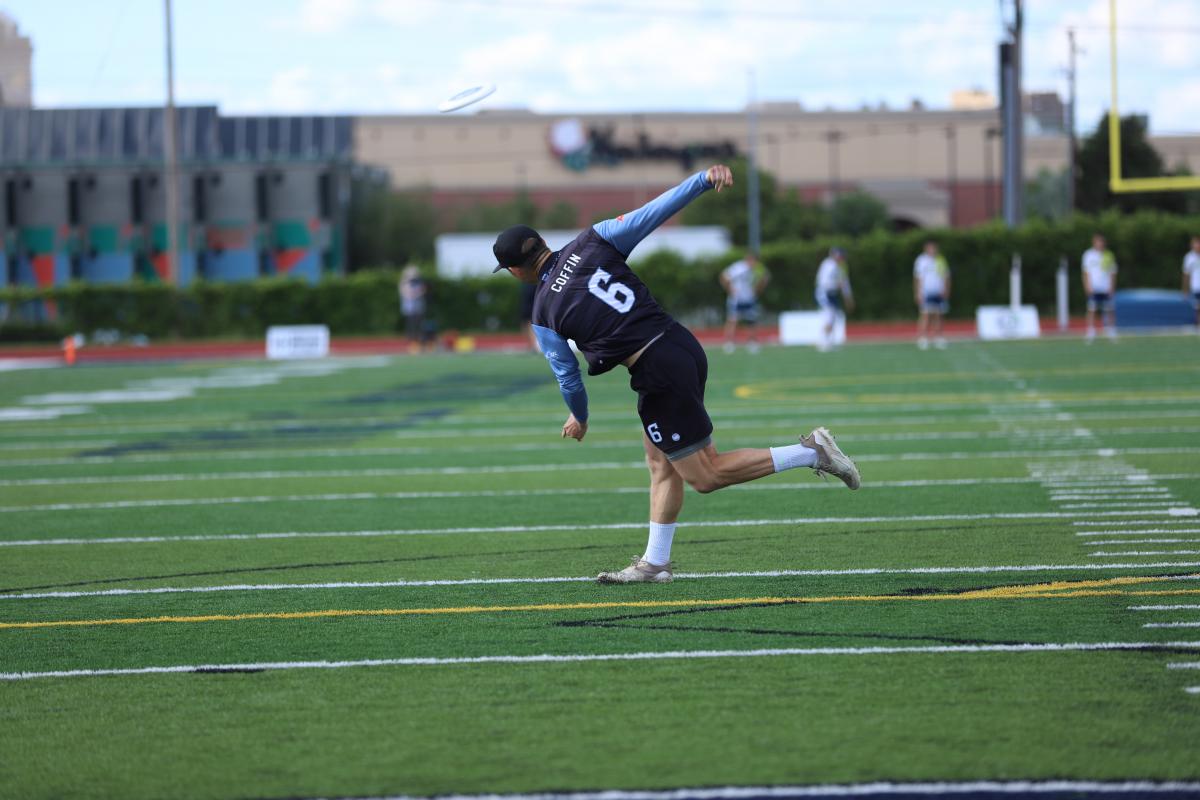 “Our pullers, Abe Coffin, Brandon Matis, and Sam Ward, put the defense in a great position to be successful all throughout the game,” said Dylan DeClerck, who led the Wind Chill with four goals and three blocks.

Winners of five straight since their home opening loss to Chicago, the Wind Chill will voyage to the Windy City this Friday night for another huge showdown against the Union. It feels like a must-win for Minnesota if the Wind Chill want to potentially host the Central Division title game.

“We know Chicago is a good team, and as the first game of the year showed, it was tight until the end,” said Vouhnoutka. "We’re looking to flip the script.”

The Union also don’t need to be reminded about the significance of Friday’s matchup.

“This game has been circled on our calendars all year,” said Goff.

The two-time defending West Division champs are officially in trouble.

San Diego embarked on their Rocky Mountain road trip with a five-game winning streak and the ambition to reclaim the narrative as the team to beat, but ultimately the Growlers were left reeling a bit after a pair of disappointing defeats against the Division’s new top two.

Salt Lake and Colorado both outplayed San Diego by sizable margins, sending the Growlers back to SoCal at 5-3 after 23-18 and 27-21 setbacks, respectively. 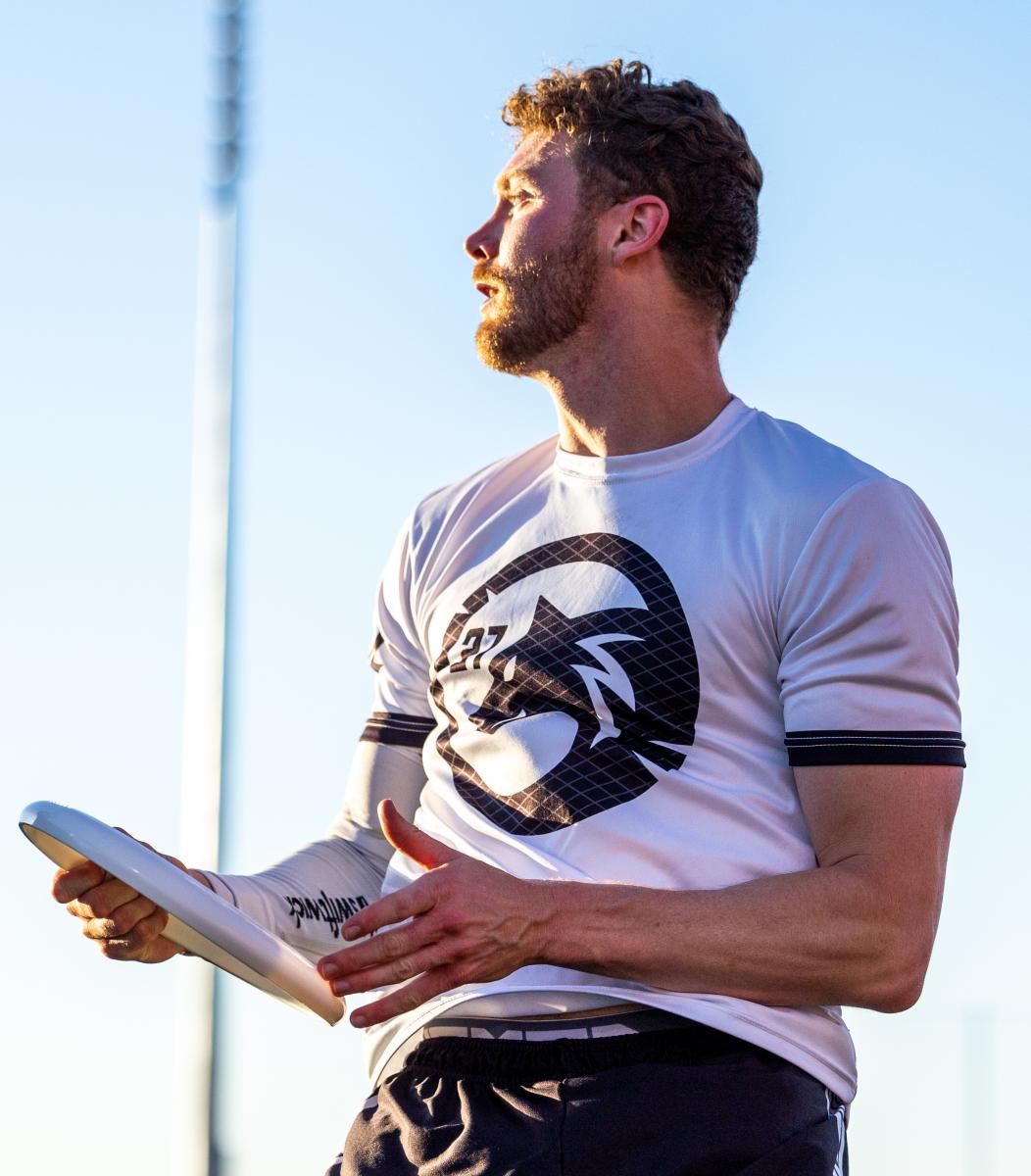 “The altitude of both places and heat of Salt Lake and missing firepower and even injuries of our rostered guys all had their influence on the weekend,” said San Diego Captain Paul Lally. “But none of that excuses our execution on the trip. This was one of the toughest weekends to help coach through because it felt like the majority of our issues were execution and decision errors, rather than systemic ones.”

On Friday against the Shred, the Growlers gifted Salt Lake 11 drops, more than a third of their 31 turnovers, the most miscues in a game for San Diego since 2018. One day later, the Growlers cleaned up their catches, but they could not dispossess the Summit O-line, as Colorado’s O offered San Diego just three break chances across 48 minutes.

“Both those teams are great and are tough to beat,” said Lally, reflecting on the Shred and Summit. “Explosive offenses and athletic defense.”

On Friday, Salt Lake registered double-digit breaks in a game for the third time in four home games, improving to 5-2 and seizing control of the second place. It was far from the Shred’s prettiest performance—Salt Lake endured a season-high 24 turnovers and completed a season-low 88.8 percent of their passes—but Joel Clutton recorded four blocks in the first half and 14 different Shred players scored a goal in their five-point victory. Salt Lake roared to a 4-1 lead and never trailed for a single second across the four quarters

On Saturday in Denver, the Growlers and Summit were tied 12-all at halftime, but Colorado used back-to-back breaks on the first two points of the second half to storm in front. The Summit maintained its offensive precision and defensive pressure, converting six second-half breaks compared to the Growlers none.

San Diego’s Paul Lally and Travis Dunn each churned for massive yardage on the second night of their back-to-back, producing 942 and 842 total yards, respectively, against the Summit. Dunn also threw nine assists and caught two goals, but he did not have enough help against the balanced and deep Colorado contingent. Quinn Finer, Jay Froude, and Thomas Brewster combined for 16 goals and just one turnover, while Alex Atkins, Jonathan Nethercutt, and Matt Jackson collectively threw 13 assists and completed 114-of-117 passes. In a familiar theme for the Summit, Cody Spicer anchored the D-line, producing two goals, two assists, one block, and earning a spot on the Week 9 "Honor Roll".

At 8-0, Colorado has two games against Los Angeles, a rematch at San Diego, and a home tilt against free-falling Portland separating the Summit from a perfect 12-0 inaugural regular season. 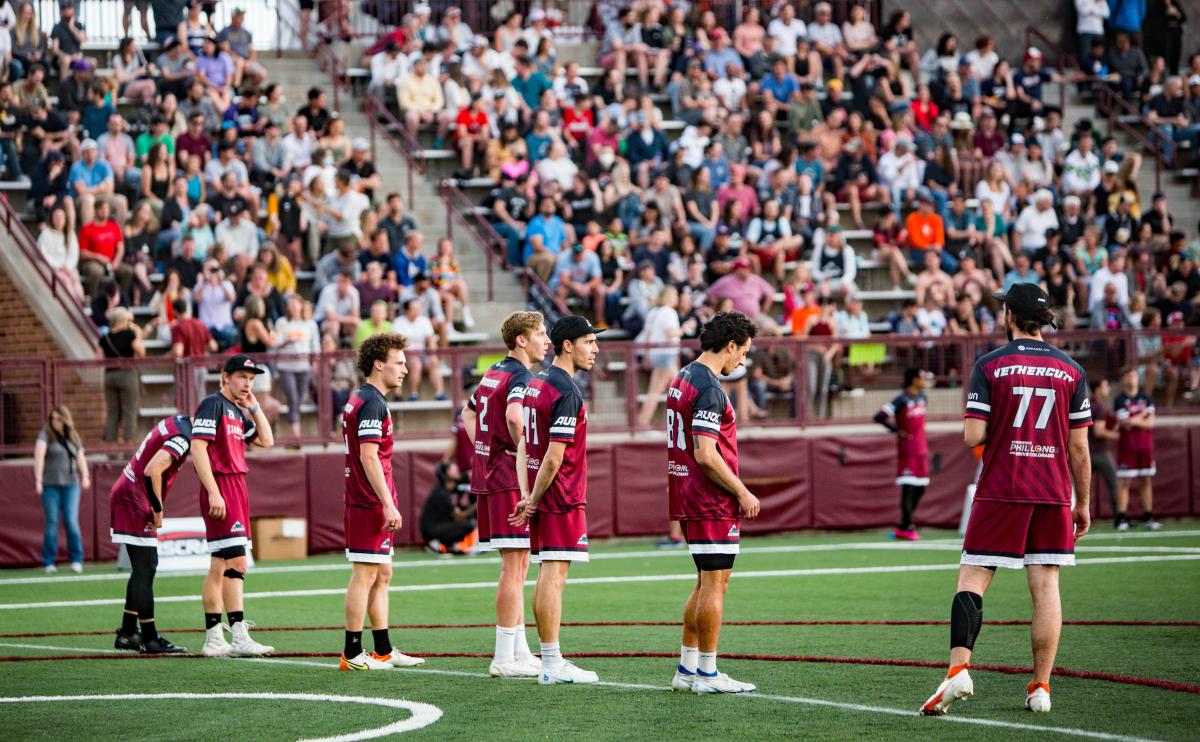 Following Saturday’s victory, Nethercutt acknowledged that the notion of going undefeated in the franchise’s first season is becoming impossible to ignore.

“12-0’s always on your mind,” Nethercutt said. “We don’t try to dodge it. Once you hit 8-0, people think about it; we’ve thought about it with every game we’ve won, but we also don’t spent time dwelling on it. Our goal, and our priority, is to hopefully have a home playoff game and be in the playoffs fighting for the chance to be at Championship Weekend, and then our goal after that, one step at a time, is to be at Championship Weekend and compete there. So it’d be sweet for sure for a first-year franchise to go undefeated, but that would be a bonus. Priorities are definitely being at playoffs and hopefully a home divisional playoff game too.”

Meanwhile, the Growlers have a week off to regroup before they get another crack at Colorado on Friday, July 8.

“I’m looking very forward to another battle against [the Summit],” said Lally. “We’ll show up much more than we did this weekend.”

Seven On The Line

There are plenty of brothers who are teammates, and we’ve seen brothers go head-to-head on rival teams several times in AUDL history. In fact, the Reinhardts, Austin’s Jake and Dallas’ Tyler, squared off against one another this past weekend. 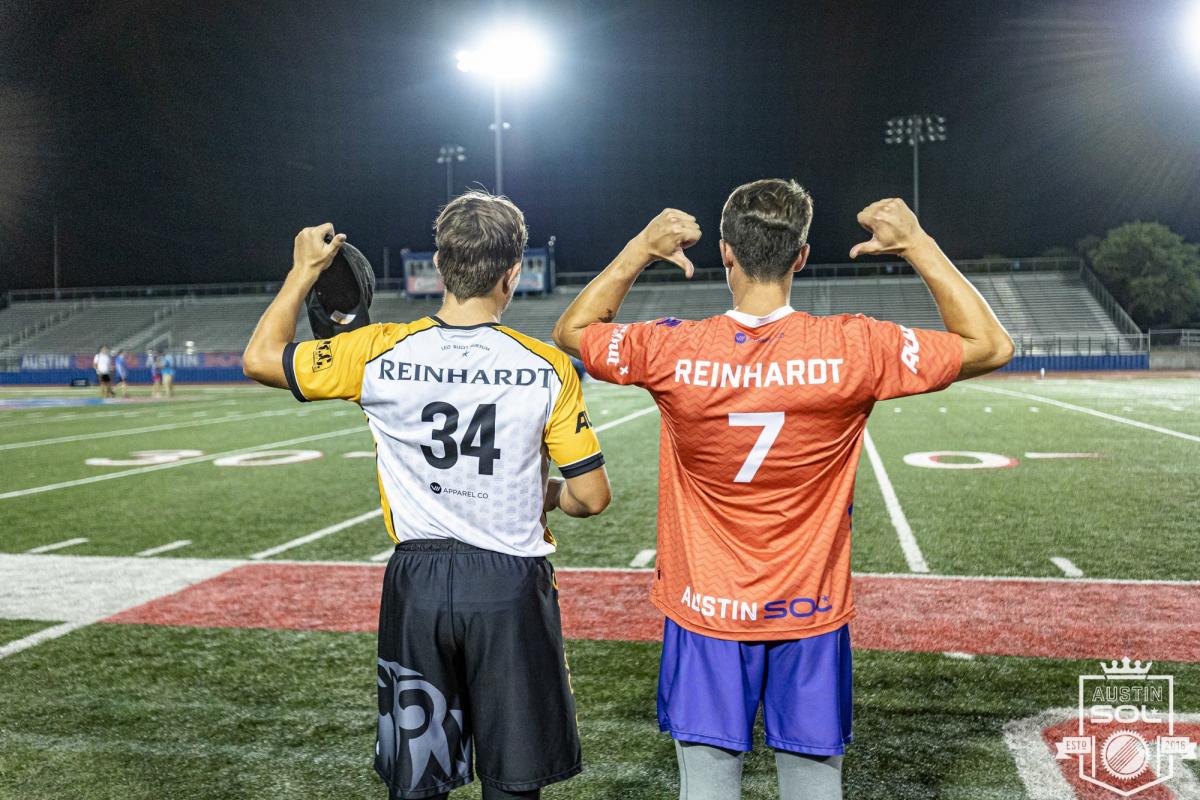 But coming up this Saturday, we’ve got the first ever Father vs. Son AUDL showdown. It’ll occur in Denver, when the Colorado Summit face the Los Angeles Aviators and one women’s Landesman loyalty gets put to the ultimate test.

Does she root for her husband or her son?

Just in case it wasn’t clear which boy she meant, she quickly clarified. 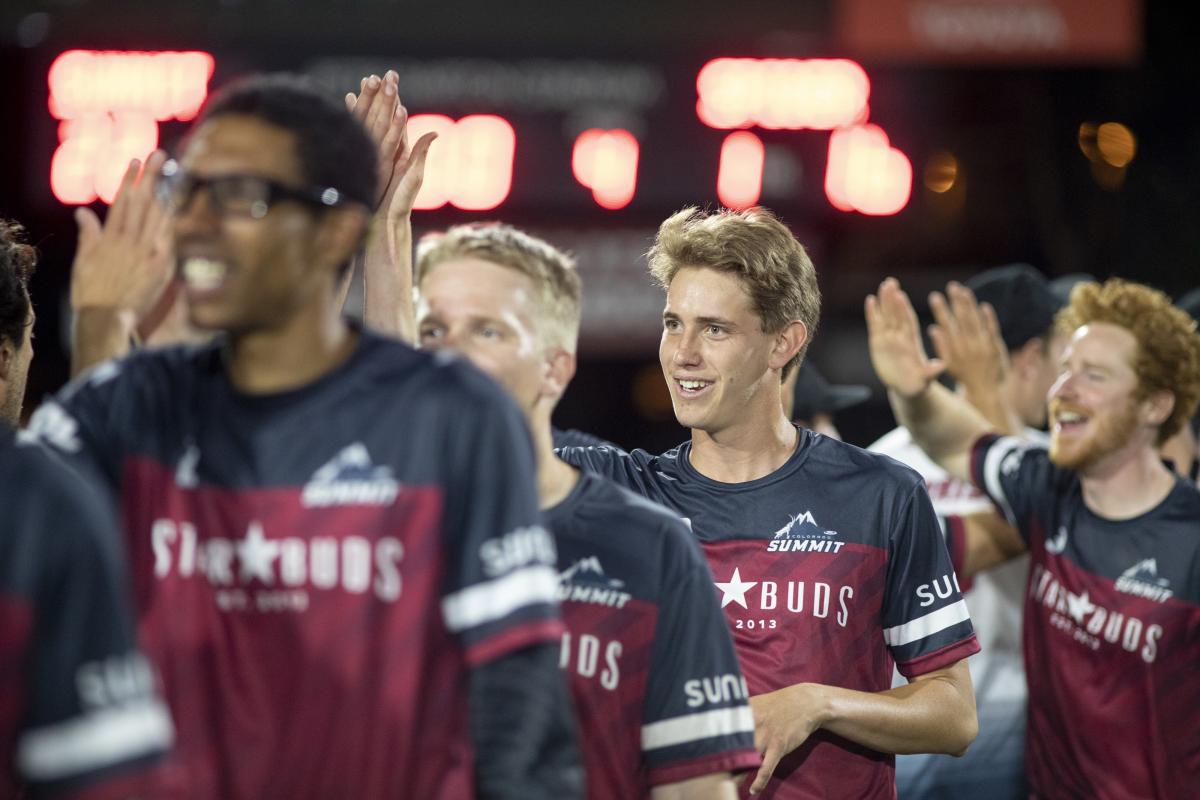 “Which boy? The one I gave birth to.”

As for dad, he seemed to understand his wife’s choice, and he knows it’ll be a different feeling than he’s ever had before.