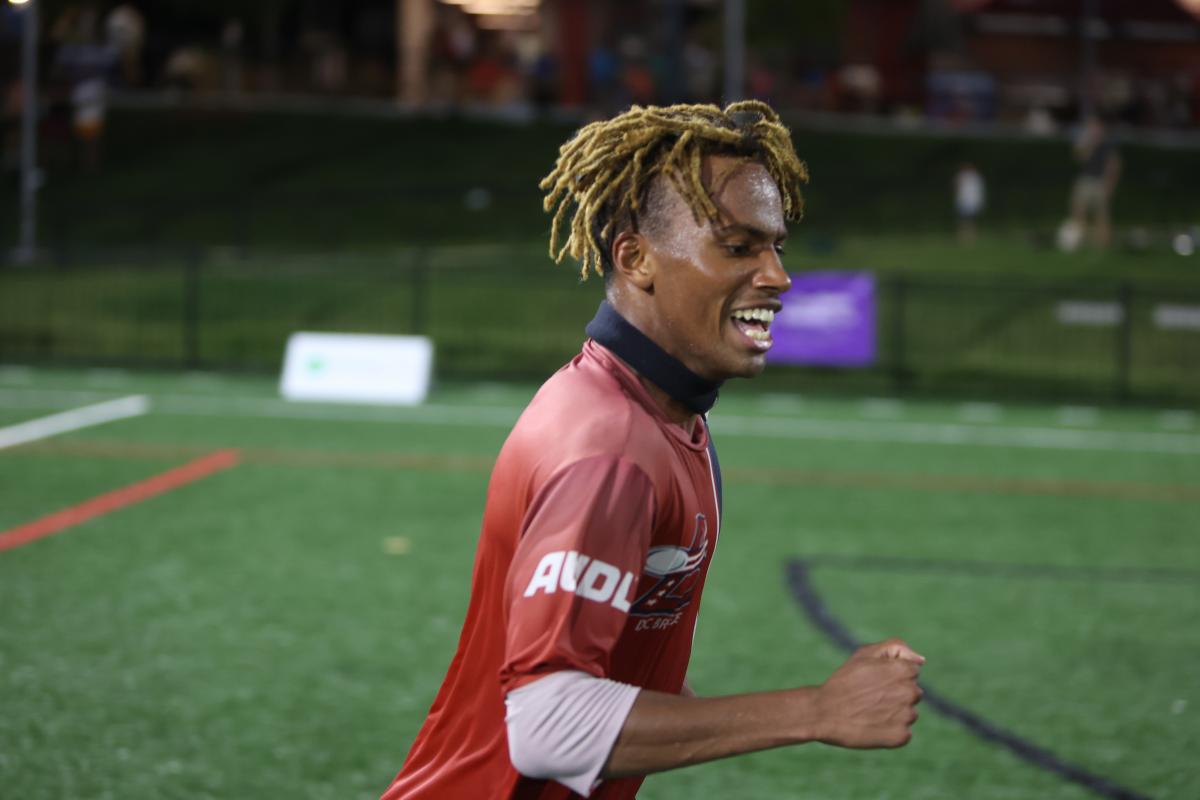 Downward trend: For all the hype heading into this season, Detroit is two games away from completing their fourth consecutive winless season

Upward trend: Tyler Reinhardt has emerged as the Legion’s primary thrower since the end of June, and the second-year handler is averaging two assists, 40 completions, and 271 passing yards per game in his last six appearances

Downward trend: After qualifying for the playoffs in five straight seasons—including three championship game appearances and a 2016 AUDL title—Dallas is one game away from becoming the sixth franchise to go winless

Upward trend: Michael Arbutine and Garrett Knobel combined for six blocks against Dallas; the Cannons are averaging over 10 blocks per game in their last four games; Tampa Bay converted a season-high seven breaks in Week 13

Downward trend: Tampa Bay is just 34-of-89 (38 percent) on offensive possessions in their last three games; Cannons have committed 20 or more turnover in nine out of their 10 games this season

Upward trend: Fourth-year handler vet Jeff Zhao completed a career high 60 throws in Week 13; with the exception of a Week 11 start on defense, Zhao is averaging over 300 throwing yards per game in his last six appearances

Downward trend: Seattle is 7-29 over the last three regular seasons; Cascades have not qualified for the playoffs since 2016

Upward trend: Despite playing in only nine games, Cole Davis-Brand collected 50 total scores and averaged nearly 500 yards of total offense in his second season as a pro; Davis-Brand has four different multi-goal games in 2022

Downward trend: Glory concluded their season by tying a season-high in turnovers (27) for the third time in 2022; Boston averaged 22 turnovers per game over their last seven contests (2-5 record)

Upward trend: 22-year-old Jakob Brissette is averaging 498 total yards per game in his last 20 starts; Brissette has 67 assists (and 61 hockey assists) in that span

Downward trend: After starting the season with two straight wins against US teams, Montreal went 0-6 down the stretch against international competition; Royal were outscored 144-92 in those final six matchups against US teams

Downward trend: Thunderbirds missed the playoffs for the third time in four seasons; Pittsburgh was just 7-of-13 in the red zone against Chicago in Week 13; T-Birds rank 23rd this season in red zone rate (70.9 percent)

Upward trend: Another seventh-year vet having his best season as a pro, Michael Kiyoi is tied for the team lead in goals (28) after scoring nine in two road games in Week 13;

Downward trend: LA has lost five in a row and has four straight games with 20 or more turnovers; Aviators have just 15 total break scores in their last five games; LA ranks fourth worst this season in breaks per game

Downward trend: Spiders got hot too late in the season and will miss the playoffs for the fourth straight season; Oakland is allowing the sixth-most opponent takeaways per game this season

Downward trend: Madison has lost four of their last six games; Radicals are averaging just 18.8 goals per game during that stretch; Madison is just 48-for-117 (41 percent) on offensive possessions in those four losses

Upward trend: The ‘Cats defense is one game away from shattering the all-time single season defensive efficiency rate record; Indy is converting 69.3 percent of their D-line possessions in 2022; Madison set the record last season (56.9 percent)

Downward trend: Despite averaging just 15.8 turnovers per game in their last five games, ‘Cats are just 2-3 down the stretch; in an ironic twist, opponents have the second highest defensive efficiency against Indy this season

Upward trend: Karl Ekwurtzel registered season highs in goals (3) and receiving yards (244) against Dallas in Week 13; Austin Taylor has 96 assists and 7,505 throwing yards in his last 22 regular season games; Atlanta has five games this season with 11 or fewer turnovers, including back-to-back games with 10 turnovers

Downward trend: For the third straight season, Atlanta is bottom three in completions per game as a team; Hustle live (and die) with the longball, which can make them streaky

Downward trend: With their loss to NY in Week 13, Philly is now 0-4 this season against their potential playoff opponents in the East, including three losses to DC and NY since the start of July; Phoenix are just 22-of-29 (76 percent) on red zone opportunities in their last two games

Upward trend: Since the start of July, Minnesota is 91-of-142 (64 percent) on offensive possessions in their last five games, which would rank third overall for the full season; Quinn Snider is averaging 4.8 goals and 235 receiving yards per game during that stretch

Upward trend: San Diego clinched their fourth straight playoff appearance with a sweep of the Northwest road trip in Week 13; Growlers have scored 20 or more goals in four straight games; Paul Lally is one of just seven players this season averaging more than 50 completions per game

Downward trend: Besides Lally and Tim Okita, no Growlers player is completing above 93.5 percent of their throws with at least 65 completions; San Diego ranks 12th as a team in completion percentage (92.8) in 2022, the second lowest of any potential playoff team

Upward trend: Rookie Luke Yorgason had his most complete game in Week 13, collecting four total scores and over 400 yards of offense without a turnover, including the game-changing bookends score in the second half; Joe Merrill has 81 goals in his first 21 regular season games as a pro

Downward trend: Shred were just 12-of-20 (60 percent) on red zone possessions in Week 13; Salt Lake is just 33-for-78 (42 percent) on break opportunities in their last four games

Upward trend: A win at home against Tampa Bay, and the Sol are in the playoffs; Jake Radack is one of just eight players averaging over 400 throwing yards per game this season; Radack, Kyle Henke, Evan Swiatek, and Mark Evans are all averaging over five scores per game in 2022

Downward trend: Austin has given up 20 or more goals six different times this season; Sol are just 32-of-44 (72 percent) in the red zone their last two games

Upward trend: Chicago committed a season-low 10 turnovers in Pittsburgh in Week 13; Pawel Janas has his fifth straight regular season with 50 or more assists; Janas is averaging 5.9 assists and 56 completions per game in 61 career regular season starts; Janas is second all-time in assists (376), 11 behind Jonathan Helton

Upward trend: DC has 43 takeaways in their last three games; Moussa Dia has seven blocks in his last three starts; Breeze are averaging eight break scores per game over their last six games

Downward trend: The Breeze committed a season-high 23 turnovers in Boston in Week 13; DC has the third worst red zone defense in the league this season, allowing opponents to convert on nearly 82 percent of their red zone opportunities

Upward trend: 21-year-old Danny Landesman is coming into his own as a thrower, and already has career highs this season in assists (17), completions (236), completion percentage (96.7 percent), hockey assists (20), and has almost tripled last year’s throwing yards total; Landesman has eight assists, 87 completions, and 577 throwing yards compared to just two throwaways in his last two games

Downward trend: Injuries are starting to become a factor for a Summit team that once looked a tier above the rest of the West; Colorado ranks 17th in red zone efficiency, second worst among potential playoff teams

Upward trend: Jacob Fairfax led the team in blocks despite playing nearly 93 percent of his total points on offense; opponents have the lowest break rate (10.9 percent) of all-time against the Flyers in 2022; Flyers committed a season-low eight turnovers in their last regular season game

Downward trend: Carolina has finished with 10 or more regular season wins four times before this season, and only made Championship Weekend once (2015)

Upward trend: Since joining the Empire, Ryan Osgar has 126 assists, 52 goals, and 11,895 total yards of offense in 22 regular season starts; Osgar finished 2022 with one huck incompletion on 22 attempts; it’s just the sixth time in AUDL history that a player has 80 or more scores and fewer than 10 throwaways in a season

Downward trend: New York is just 9-of-31 (29 percent) on break opportunities against Philly this season