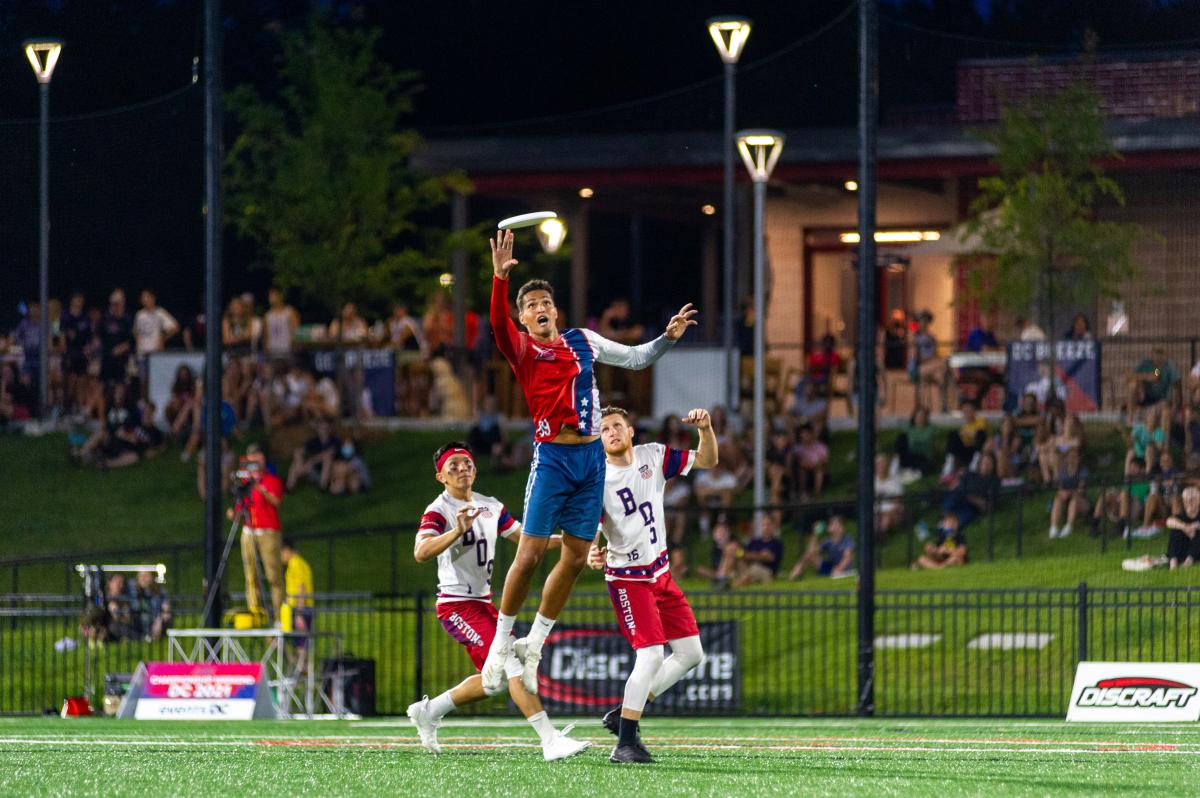 A lot of holding patterns this week as much of the action went to slate. But it all feels like the eye of the storm as the upcoming weekend will shake out more divisional hierarchies.

19. Detroit Mechanix
Even with another loss, it was an exciting week for the Mechanix as Joe Cubitt’s massive layout goal splashed onto SportsCenter. The ambidextrous all-star is usually heralded for his green-light-go throwing style, but the 5’5” Detroit captain has found a new dimension in his game this year as a receiver. Cubitt has always been active in the backfield, but he’s using his quickness to create separation in the backfield and streak to open space. He has seven goals and 446 receiving yards in just his last three games; Cubitt had 11 goals total in 12 games as a rookie in 2019.

18. Pittsburgh Thunderbirds
The T-birds took the L in both of their road games in Week 3, dropping Pittsburgh to 0-4 and leaving them as the only winless team in the league besides Detroit. CJ Colicchio and Max Sheppard rank second and third in the AUDL, respectively, in total scores, and have been making a ton of highlight plays. But they, like the rest of the Thunderbirds, still struggle with turnovers: Both players are completing less than 89 percent of their throws, and Pittsburgh as a team is third worst in the league in turnovers per game

17. Seattle Cascades
This young Cascades team is a bunch of waveriders. When their energy is up and they’re making plays and rallying around each other, it feels like they can punch with anyone in the division for stretches of play. But true to their overeager nature, there’s usually a sugar-rush like crash: Seattle scored 10 goals and held a two-goal lead in the first half against San Diego last Sunday before scoring six goals in the final 29 minutes of the game in the eventual overtime loss. They’ve held multi-goal second half leads in each of the last two games, and failed to hang on in both.

16. San Jose Spiders
The Spiders dug an early grave at home for the second consecutive week, committing a series of lackadaisical execution errors before stabilizing in the final three frames. And here comes Jordan Kerr. The rookie lefty had no turnovers while dishing five assists, scoring two goals, and totaling up over 400 yards of offense against the reigning division champs. Kerr is quick, tall, and runs nice routes, but it’s his decision making (95.50 percent on 67 throws in three games) that is quickly catching on at the pro level.

15. Tampa Bay Cannons
The Cannons offense has struggled to get a rhythm going early in games, scoring just four first half goals in their Week 3 loss to Atlanta; Tampa Bay are the only team in 2021 not to score 20-plus goals in a game. The offense is very capable, but is sometimes too straightforward in its attack. Andrew Roney and Bobby Ley had another big throwing night, but the opposing Atlanta defense seemed content in allowing them to shoot themselves out, so to speak. They draw Boston tomorrow night, who has surrendered over 25 a game in 2021, so the Cannons might go boom yet.

14. Indianapolis AlleyCats
The Radicals doubled up the AlleyCats 8-4 in the second quarter of Sunday’s game, but otherwise Indy held even with the home team in Madison the other three frames of play. And once again, league assists leader Travis Carpenter was a rock with the disc. Carpenter has thrown for 300-plus yards in each of his four games, but his most impressive stat is his career-best 98.40 completion rate, which is fourth among all throwers with 100-plus passes in 2021. If he keeps it above 95 percent for the season, Carpenter will have improved his completion percentage in each of the past five seasons as a pro.

13. Madison Radicals
The Madison defense converted on 11-of-14 break opportunities on Sunday as the Radicals started to look like themselves blitzing off of opponent turnovers. You will recognize Kevin Pettit-Scantling atop the league leaderboard in blocks, but it’s teammate Luke Marks that is starting to make a name for himself. Marks had five blocks in the Radicals’ two Week 3 games, including the first of the game on Sunday to get the home crowd into it.

12. Los Angeles Aviators
LA is the first team from the West to get a taste of the gauntlet that is a Texas two-game road trip. And despite going 0-2, the Aviators fared remarkably well, especially considering the absences of Danny Landesman and Calvin Brown. The offense still lacks a true contender’s level of consistency, but LA still puts together some of the most impressive drives in the AUDL. Sean McDougall just scores goals, and Sam Cook is emerging as a real weapon in the Aviators offense. Going into this year, I largely considered him a receiving target, but the man has shown one of the best hucking games in the division so far this year. Still, the Aviators are 1-3 for a reason, and that’s their 23-plus turnovers per game.

11. Philadelphia Phoenix
The Phoenix feasted on the remains of the ‘Birds in Pittsburgh’s second game of a back-to-back, with Greg Martin erupting for nine total scores and 463 receiving yards in the Philly blowout win. Now comes the true challenge: The Phoenix go on the road this weekend to face Raleigh and Atlanta. Those two games will surely establish a pecking order in the Atlantic.

10. Boston Glory
The Boston defense surrendered 59 goals to DC and Raleigh, but still, it’s hard not to like Glory’s fight. After enduring the outright siege DC’s offense inflicted upon them on Friday, Raleigh jumped to an early lead the next night on Boston, and it would’ve been easy for Glory to give in then and there. But instead, Boston battled, making a game of it down the stretch thanks to second and third quarter buzzer beaters to emerging star Tanner Halkyard. And as good as Ben Sadok has been, it’s important to remember that Boston has been without arguably it’s best player Tannor Johnson during their current three-game skid.

9. Minnesota Wind Chill
The Wind Chill picked up their second straight win at home against Madison, as the Minnesota offense exploded for 25 goals in a bit of a statement performance against their border rivals. Cole Jurek, or “Beef” as is more befitting, had game highs in receiving yards (335) and goals (6) in his best game as a pro. The throwing backfield was fantastic again, but the real secret sauce to the attack was the play of Charles Weinberg who was striking all night long with his throws and legs from the continuation space.

8. Austin Sol
It took a late game comeback at home to vanquish an LA team playing their second game in as many nights, but Austin did get it done in overtime to remain atop the West Division standings. And despite solid throwing performances from Paul Starkel and Joe Sefton, the Sol struggled a bit to convert red zone scores, punching in just 15 of their whopping 25 opportunities. The Austin offense was relentless in getting the disc back, however, with Evan Swiatek coming up with a game-high four blocks.

7. Raleigh Flyers
All you need to know about this year’s Flyers team can be found in Saturday night’s box score, as Raleigh won two quarters by three goals a piece, while losing another by the same margin to allow Boston back into the game. Veteran defender Joey Cretella got two huge swats to protect the Flyers lead in the fourth as the Raleigh defense came through in the clutch. Eric Taylor is not-so-quietly building off his All Rookie 2019 season, already second in the league with 16 assists in just three games; he had nearly 600 yards of total offense in Saturday’s win without a turnover.

6. San Diego Growlers
San Diego comes away from their windy road trip 2-0, but the razor edge’s margin between their 3-1 reality and a 1-3 nightmare has been disconcerting to say the least. The Growlers defense and their ability to clamp down late in the second half of games continues to be the backbone of this team’s early success; Khalif El-Salaam and his throws have become a feature on the Growlers counterattack drives. The San Diego offense remains top six in the league in terms of efficiency, but the Growlers are averaging a league-average 19.50 goals per game after being the second most potent team in the AUDL in 2019.

5. Dallas Roughnecks
The Dallas defense smothered LA out the gate, with Ben Lewis leading the way with four blocks. Able to defend throwers and receivers like a linebacker in coverage, Lewis has perennially been one of the most underrated parts of the Roughnecks takeaway-heavy defense. Dallas is still tinkering with their lineups and finding their rhythm, and going undefeated this weekend on their SoCal road trip could have them resembling their expected championship form.

4. New York Empire
The Empire got a wire-to-wire win in Pittsburgh, but it wasn’t especially clean play from the reigning champs as they completed just 90 percent of their throws as a team. Elliott Chartock had a 2021 AUDL single-game high of 766 total yards in just his second game with the Empire, but he and Ryan Osgar combined for eight turnovers in Week 3; New York is still working in a fair amount of new pieces.

3. DC Breeze
Without a doubt, Friday’s Breeze rout of Boston was the most complete performance I’ve seen from a team at the pro level. They were perfect in the red zone (22-of-22), nearly perfect on break opportunities (12-of-14), and committed just seven turnovers as a team while tying the single-game season high of 32. Norrboms, J & J Roofing, Jonny Malks, and Jacques Nissen all deserve a piece of the spotlight. But the man of the night was AJ Merriman, who has been the conductor of the B-B-B-BREEZE break train all season. Merriman had three blocks and 300+ yards on just 11 touches, detonating again and again for DC counterpunching bombs.

2. Chicago Union
Three up and three down for the Union so far in 2021, as they’ve dispatched each opponent this season with similar ease and efficiency. Pawel Janas had six assists and 300+ throwing yards leading the Chicago offense to 14-of-15 conversions. But without a slew of normal starters, it was good playing reps for rookie Paul Arters. With WR1 speed, Arters has been a great primary option initiating the Union attack, and he has a great turn-and-release flick huck that makes him valuable as a continuation striker.

1. Atlanta Hustle
For the second time in three games, the Hustle held an opponent to just four goals in the first half. The team has undoubtedly upgraded its personnel, but the anchor has been franchise blocks leader and defensive captain Kelvin Williams. Less a downfield playmaker these days, Williams has used his length and smarts to sneak into throwing lanes and swat the disc, usually leading to an easy leak out and score.