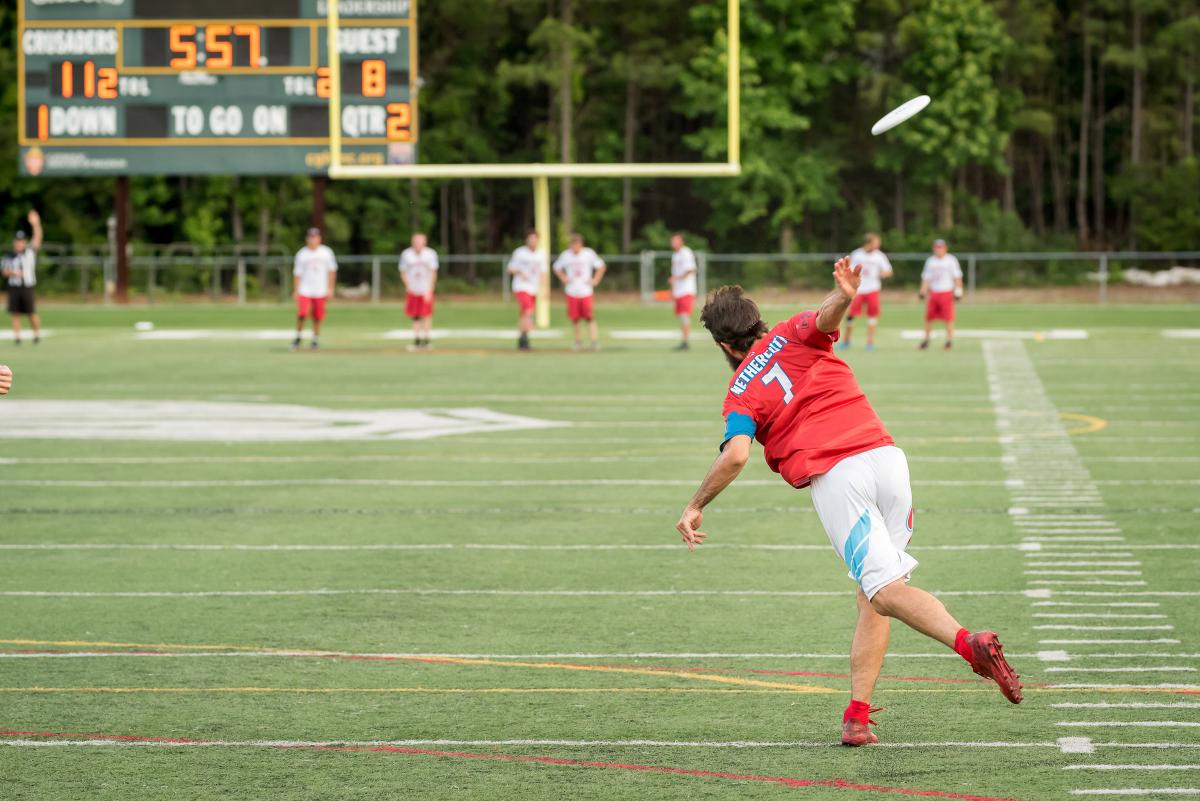 The AUDL is becoming a league defined by offseason player movement, and the Raleigh Flyers have staked their 2018 hopes on the signing of superstar Mischa Freystaetter.

Let's start with the basics: Raleigh is the favorite to win the 2018 AUDL championship. But don't just take my word for it. Stars on teams such as the Toronto Rush and Madison Radicals have consistently told me that Raleigh is the team to beat. Raleigh Head Coach Mike DeNardis admitted that the Flyers might be the best team on paper, but that was the extent of the self praise he would indulge. Let’s look, then, at the Flyers on paper.

Raleigh will return reigning league MVP Jonathan Nethercutt. Nethercutt is a statistical hoarder, throwing 72 assists in only 11 regular season games last year. He somehow even stepped up his game in the playoffs, throwing 10 assists and catching five goals in a loss to the Roughnecks.

“It's kind of any cutter’s dream to be able to play with any player of Nutt's caliber,” said Flyers teammate and former league MVP Jonathan Helton.

No one in the world is currently better at throwing deep than Nethercutt. The combination of power, precision, and touch Nethercutt generates on his throws is unparalleled. When Nutt throws a huck into space, it’s art.

Nethercutt complements and is bolstered by an incredibly talented group of receivers. Chief among them is Jacob Fairfax, who is becoming a nightmare in space downfield. Possessing elite speed and hops, Fairfax is as diligent in his route running as he is dominant in his athleticism, and is very capable of leaping over defenders en route to the disc.

And now with Freystaetter added to the mix, Raleigh roster arguably the two most imposing aerial athletes in the division, if not the league. Flyers teammates have entertained the idea of Fairfax beating Freystaetter in the air, and it’s a fun matchup to imagine. But this Flyers team’s offensive weapons go well beyond their bigs.

Matt Bode and Noah Saul have always been terrific and efficient utility offensive options. Helton is a former two-time MVP who continues to develop new facets to his game, especially as a thrower. Terrence Mitchell has blazing speed and seems to float in the air a tick longer than anyone. With this stable of deep threats, it’s no wonder that Raleigh acquired a reputation as an offensive team that likes to huck.

David Allison is the Flyers’ assistant coach and offensive coordinator, though DeNardis described him as something of a co-head coach. Allison explained in detail why the Flyers resorted to deep bombs so frequently in 2017.

“I'm a fan of hucking to the right people in the right circumstance," Allison said. "In general, I want to play a pretty offense, and hucks are a part of that. You need to balance the field by using both the width and the depth of the field, otherwise defenses can sort of key in to what you're doing."

The Flyers already had a pack of playmakers and the number three scoring offense at the end of 2017. Then DeNardis went out and got himself two of the best deep threats in the AUDL in Freystaetter and Jakeem Polk. Polk is a defensive specialist who exudes power with every stride and leap.

Freystaetter is one of the AUDL’s largest figures, standing at a skyscraping 6’7”. However, Freystaetter offers far more than his size on the field. He’s more than a capable thrower. He’s quick on his feet, willing to lay out at a moment’s notice. And what really sets him apart is his ability to read the field and use his skills to their utmost advantage.

For years, Freystaetter was the playmaking leader of the Cannons. He had been one of the Flyers’ most feared opponents, performing ridiculous feats, as varied as scoring 10 goals in a game, to locking up Nethercutt as a handler defender.

“He's a really tough defender to deal with,” Nethercutt said. “Especially as someone who marked me a bunch, he's just, he's not fun to have on the mark.”

DeNardis has been working hard for years to attract Mischa to his club. With the Cannons moving from Jacksonville to Tampa, the Flyers were finally able to land their white whale:

"We've had a lot of battles [against] him," DeNardis said. "I'm always trying to recruit the best talent we can possibly get. He's obviously the biggest, he's the combination of the biggest receiver and the biggest body and the most agile big man in the country. Or the world even."

And Raleigh's less-than-desired results the past three seasons have left the front office scratching their heads. How can we improve a team that has two MVPs and skill at every position? The answer was towering in front of them the whole time: Bring aboard their biggest rival.

"Mischa's a piece that we've been missing in Raleigh for a long time,” said DeNardis.

DeNardis and Allison both confirmed that they will look to use Freystaetter most frequently on the offensive line, even if he isn’t “married to the line”. He set the AUDL single season goal record of 95 in 2016 before Jacksonville moved him to the D-Line in 2017. Returning to the O-Line will offer Nethercutt a major release valve, while also easing pressure off of receivers that previously drew a defence’s top guys. His presence on the offence will open up the field space about which Allison dreams. Nethercutt and Freystaetter ought to become the Brady and Moss of the AUDL.

In past years, DeNardis has pioneered an unlikely way to throw receivers open, nicknamed ‘The Throw of the Future.’ The throw of the future allows a heady handler to take advantage of defensive principles common to ultimate frisbee, as Nethercutt explains:

It's more of the throw of the present now that we're all kind of buying in and getting used to throwing it. We always refer to it kind of as that outside-in edge, where we throw the disc where it travels usually a third of the field horizontally, so if I release it from the flick sideline, its landing point will be kind of fading into the middle of the field. It's a throw we like to use when receivers don't necessarily have vertical separation, but they do have horizontal separation. We just wanna kind of fade it and let that OI edge tail to their outside shoulder, where it's constantly moving away from their defender. Over the stack, or even over their defender's head.

The team is creatively looking ahead to the future in more ways than one. Raleigh is thrilled about a new merch deal with new partners, with coming details to be announced by the team. There is a new women’s team associated with Raleigh, called the Radiance. The Raleigh Radiance already have games scheduled against the Nashville NightShade, and management is giddy about the prospect of professional women’s ultimate.

As much as anything, Raleigh is excited for games to begin. DeNardis helped create perhaps the league’s hardest schedule for his team in 2018. On top of regular season games against the division rival Roughnecks, Raleigh will play two cross-division contests against the DC Breeze and the Madison Radicals. Both opponents will be stiff competition; their combined records in 2017 were 24-8. In last year’s contest between Raleigh and DC, the Flyers needed a furious fourth quarter comeback to claim victory.

Last season, Raleigh's matchup with DC came down to a half field Nethercutt hammer at the end of regulation.

“There's not been very many places that we've gone to on the road that are gonna have a fan base like that, that are gonna be cheering so clearly against you,” said Allison.

Most of all, a game in Madison will be well attended. Nethercutt is excited for his team to gain experience playing in front of large crowds in important moments.

“When you get down to playoffs and stuff, you have that atmosphere, and the more accustomed your players are to it, the less likely they are to have any type of pressure-related problems,” Nethercutt said.

Raleigh (without Nethercutt) lost to Madison in the 2015 playoffs. The Flyers confessed that their nerves wilted against the Dallas Roughnecks in the 2017 division championship game. They fully expected to win the game at home, but early unforced errors allowed Dallas to build a lead that Raleigh could not surmount.

“Last year we had a home playoff game against a very experienced and talented Dallas team, and they got the better of us that day," said Allison. "I think their experience probably made a big difference there.”

The best team on paper, then, is excited for their on-field experience to solidify their potential. Teams in Toronto and Madison have far more experience in the AUDL playoffs, but they also don’t have Nethercutt or Freystaetter. Even if the players have playoffs on their minds, they’re most excited to play together. I chatted with Nethercutt directly after him returning from Dream Cup, and he was already antsy to get back out onto the field with his Raleigh teammates. These guys have fun, perhaps more visibly than any other team in the league. They’re loud in celebration, and they should have lots to celebrate during the long grind of the 2018 season.

The Raleigh Flyers have always been close to the league’s elite, but they finally feel like they have arrived.  DeNardis scheduled their difficult road to the playoffs with a specific goal in mind.

“We have a really tough road to yield wins, and that's how we're gonna build the grit we need to be successful at the end of the day,” DeNardis said.

But if they get that experience, learn how to win under pressure, the entire league is hereby on notice. The team of the future is here, and they’re going to sky you. It might not be long before the Raleigh Flyers are the team of the present.