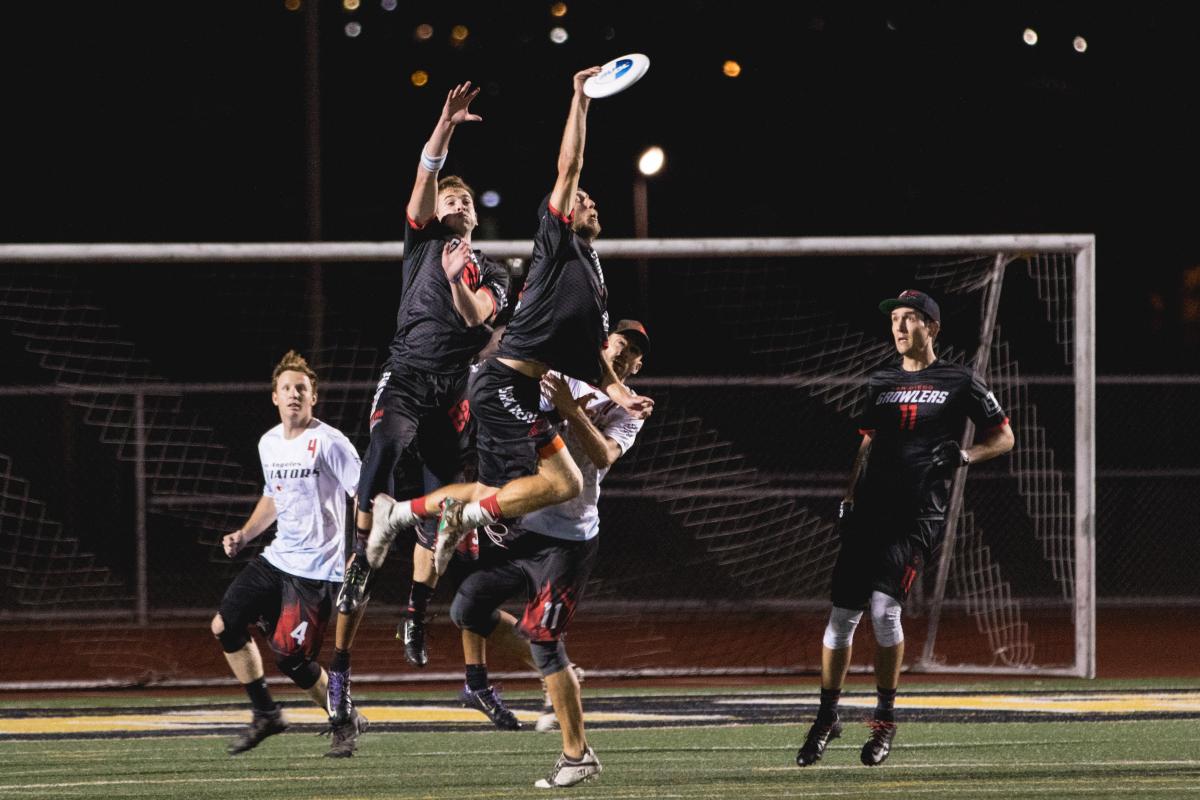 With the 2020 AUDL season now officially cancelled, new television partner Fox Sports will continue to re-air many of the league’s classic games from years past. Next up is the 2019 West Division Championship Game between the Los Angeles Aviators and San Diego Growlers. Here’s what I most remember about the build-up and aftermath from that particular title showdown.

The most interesting aspect of the AUDL’s SoCal rivalry is that talent has so frequently not been the deciding factor when these two teams square off. Obviously, skills and strategies are necessary and important, but Los Angeles and San Diego have engaged in so many battles that have yielded surprising results. Virtually every year since the franchise’s were founded, there have been instances where the Aviators prevailed in one matchup and then the Growlers responded with a victory just one week later, despite very few personnel changes in between. The familiarity, friendly contentiousness, and personal motivations that characterize this rivalry have made it unique and unpredictable, which frankly makes it great for television. 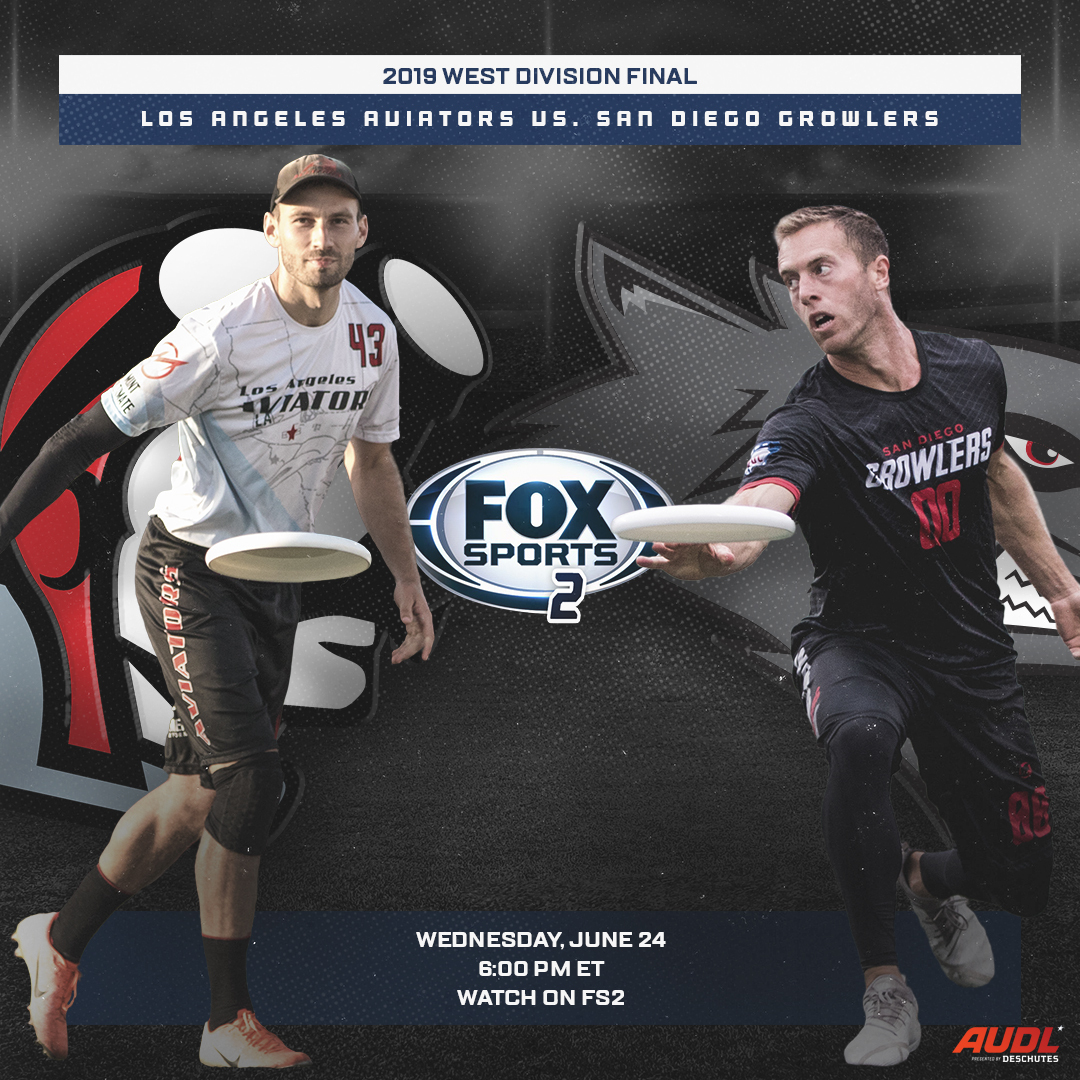 These two SoCal cities have also embarked on relatively similar journeys since joining the AUDL in 2015. Initially, both rosters consisted of dedicated core players who, deep down, understood that they were underdogs in the powerful West Division. The San Jose Spiders won back-to-back championships in 2014 and 2015, the Seattle Cascades had their strongest teams in 2015 and 2016, advancing to the AUDL championship game in 16, and the San Francisco FlameThrowers were no slouch either, featuring several players in 2015 and 2016 that went on to win the whole thing in 2017. Even the Vancouver Riptide were a mighty competitive operation, with a slew of Canada’s top players that always gave their opponents a tough fight. Realistically, Los Angeles and San Diego were two locations that did not have the same caliber of ultimate history or tradition as any of their divisional counterparts, which they both seemed to realize and embrace, almost from the beginning. By accepting these dynamics, it enabled them to plot a different course towards a championship.

To become successful, the Aviators and Growlers had to build their own cultures and styles. They needed to avoid tempting shortcuts and create chemistry from within, utilizing their natural pipelines to develop winners. San Diego’s bold opening statement of signing Kurt Gibson, Jimmy Mickle, and Nick Lance was definitely exciting, but it did not end up producing results exactly like the organization expected. Out of town stars can be valuable chips to add into the pot, but a strong local core has become an essential starting point for all AUDL franchises. Consequently, when you think of these two SoCal franchises now, you start with the homegrown athletes that began as relative unknowns and have developed into All-AUDL caliber contributors. 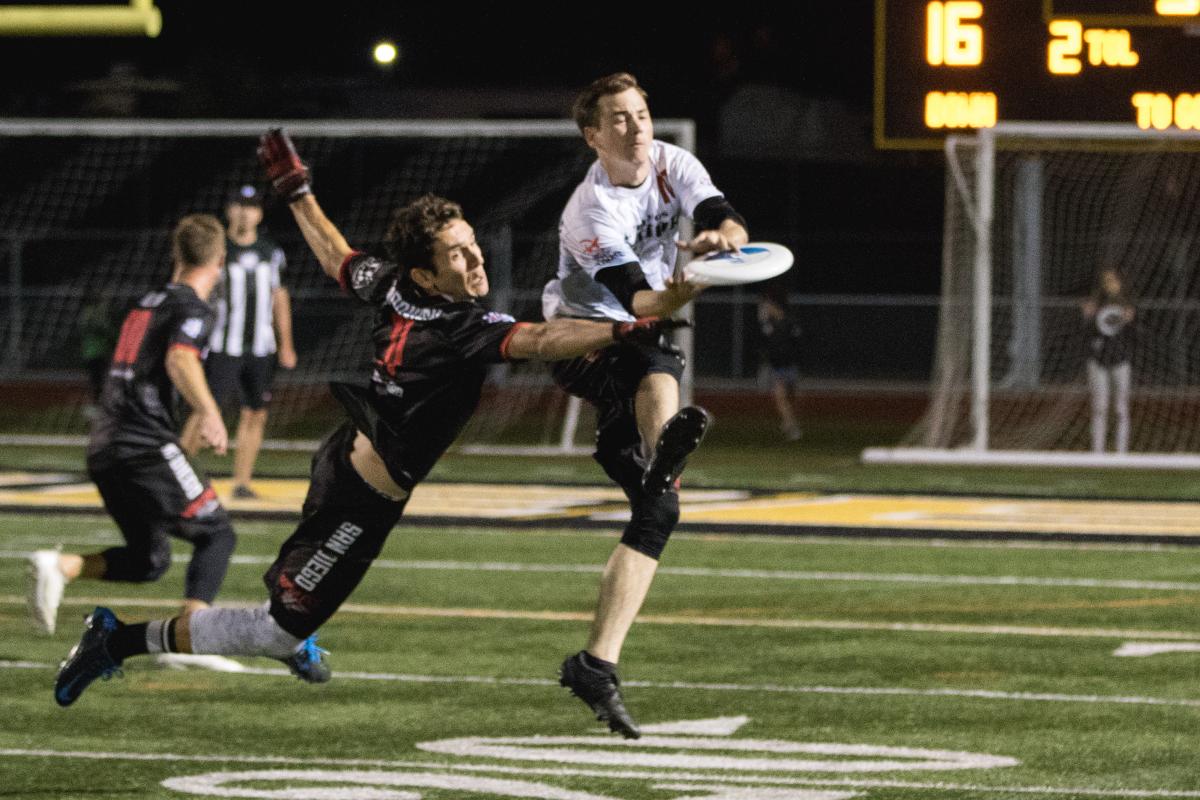 For San Diego, that conversation starts with Dom Leggio and Steven Milardovich, original Growlers who are currently the franchise all-time leaders in completions and blocks, respectively. Travis Dunn has also blossomed into stardom, a rise that coincided with his full-time move to San Diego in 2016 after playing the previous year as a commuting player from Arizona; now, Dunn is the Growlers’ all-time scoring king, pacing the franchise in both goals and assists.

On Los Angeles, it’s the quartet of Tim Beatty, Eric Lissner, Sean McDougall, and Zach Theodore, none of whom were national names when they signed their first pro deals. It’s particularly astounding that those four have become foundational cornerstones for the Aviators when considering that three of them have all told stories about how they barely made or were cut from the original 2015 squad. Five years later, Beatty, Lissner, McDougall, and Theodore are the franchise leaders in completions, assists, goals, and blocks, respectively.

The dedication of those core individuals set the tone for the gradual rises, which was obviously complemented by adding additional talent through the years. The Growlers were lifted by, among other things, the steady handling from Tim Okita, the downfield dynamism from Sean Ham, and the all-around purpose and presence from Goose Helton. With LA, Aaron Weaver’s gregarious personality and on-field abilities rose to an All-Star level, while Colombian import Joc Jimenez and 18-year-old rookie Danny Landesman gave a powerful jolt of firepower to the Aviators’ O-line. These key cogs all were crucial ornaments to their franchise’s return to the postseason in 2019, setting the stage for this SoCal showdown with local bragging rights and a berth to Championship Weekend on the line. 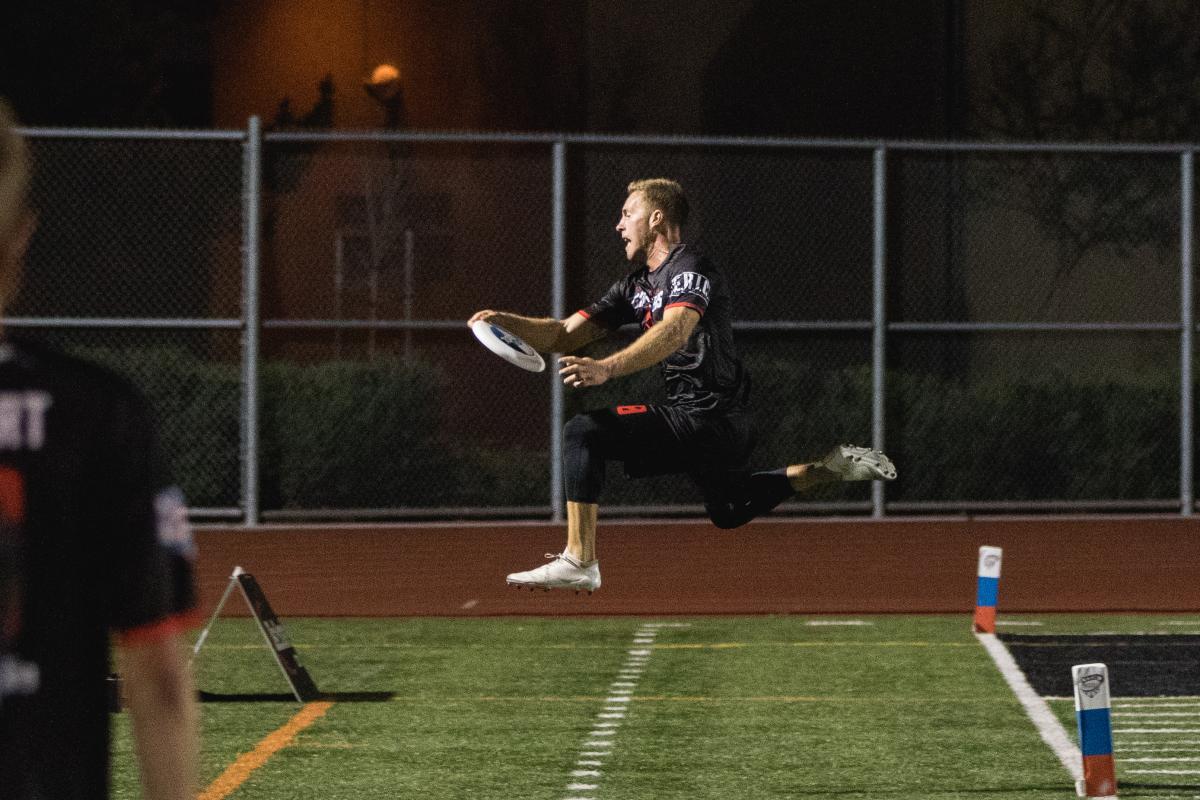 By the time the West Division title matchup was confirmed, San Diego had won three of the four regular season meetings, but Los Angeles had the superior full-season point differential. Once again, with these two SoCal rivals, it felt like a bona-fide toss-up; the Growlers perhaps a tad more talented, but the Aviators possessing the Championship Weekend experience that could be a valuable intangible in pressure-filled moments. Thankfully, each team flexed their powers to provide us with a thrilling three and a half quarters in front of a rowdy hometown San Diego crowd. Between the personnel, the build-up, the setting, the strategic wrinkles, the high-flying moments, the momentum swings, and the buzzer-beaters, we witnessed arguably the most thrilling West Division title showdown that the league had ever seen.

The third quarter especially offered the wildest spectator experience, with crazy plays, lead changes, and a genuine uncertainty about what the outcome would be. Both teams put forth immense efforts that you can still feel through the screen on the rewatch, with bodies flying around effortlessly and sideline energies totally locked into the task at hand. Though we would see some slight separation late in the fourth quarter, this battle left both teams with a lasting feeling of respect toward their opponent, and to the platform on which they were able to perform. 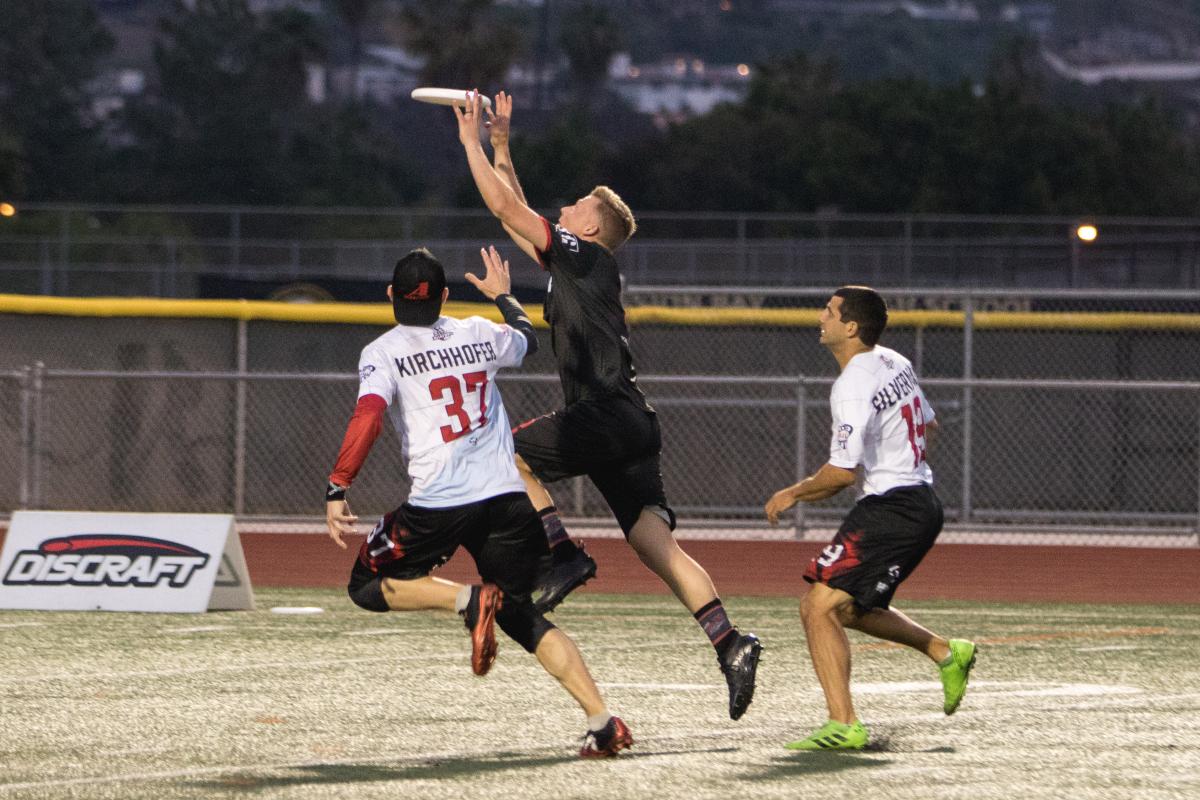 With the sad news that emerged over the past 24 hours about the 2020 season getting tabled, this particular game between rivals remains an excellent showcase for the sport, and it debuts today on FS2. Hopefully, it can remind us just how special this league can be, while serving as an uplifting and entertaining couple of hours during these dark times.

The Aviators-Roughnecks 2019 West Division Title Game premieres on FS2 today (on Wednesday, June 24) at 6:00 PMET. This broadcast will also be preceded by an encore presentation of the 2019 Semifinal matchup between the Indianapolis AlleyCats and New York Empire, beginning at 3:30 ET on FS2.