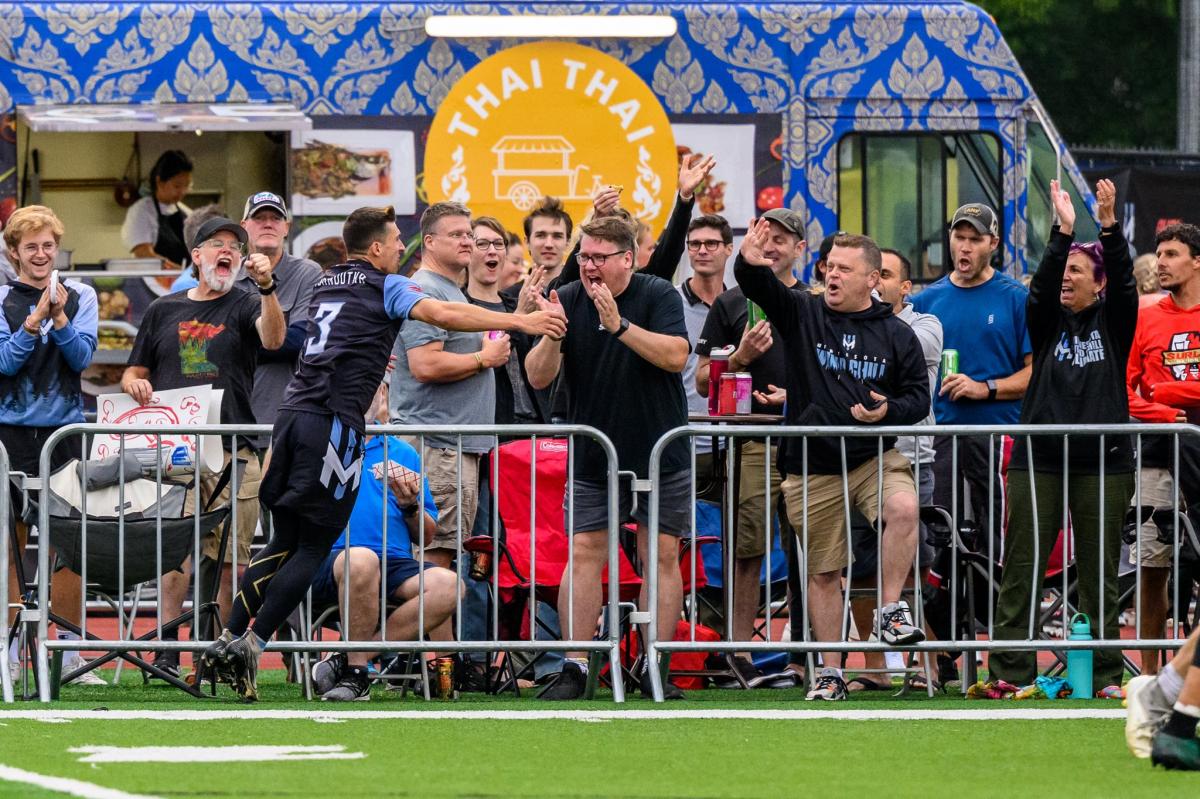 Early breaks were the story for the Wind Chill on Saturday in St. Paul, and DeClerck caught two D-line goals in the first eight minutes to surge Minnesota to an early lead. He also played more points than anyone on his team, and he was on the field for all seven breaks, as Minnesota went 7-for-10 on break chances in their 20-18 victory over the AlleyCats. DeClerck’s dynamic defensive presence and ability to help convert turns into scores has been a critical component for the Wind Chill’s success all season long.

Statistically, it was a relatively ordinary game for Kerr compared to the eye-popping numbers he produced throughout the year, but his playoff debut still resonated as one of the premier performances of the week. Amidst windy conditions that created 53 turnovers—five more than the other two games combined—Kerr still delivered five assists and over 400 total yards, both game-highs, as the Shred prevailed 19-16 to advance to the West Division final.

An underrated cog for the AlleyCats, Keusch’s rising value was illustrated by the fact that he played 29 points on Saturday, three more than anyone else in the game. He caught four goals, threw one assist, and registered one block, while completing all 17 of his passes for an Indy O-line that stabilized after a shaky start to seriously threaten the Wind Chill in the fourth quarter. Keusch, who just turned 22 in May, also finished a game-high plus-six.

The Breeze utilized a balanced, possession-oriented attack in their 23-18 victory over Philly, making it tricky to isolate one player from another in terms of their value to the offense. But Malks’ steady excellence certainly stands out, with five goals, two assists, and zero turnovers on a game-high 55 completions. He also led the Breeze with 517 total yards and five hockey assists, an indication of just how prevalent his consistent contributions were throughout the night. DC completed a season-low three hucks, but also had a season-low eight turnovers, with Malks steering the offense toward the Breeze’s first playoff win since 2017.

He’s been a solid defender for the Shred throughout the franchise’s inaugural campaign, but Terry delivered his top performance of the season in Saturday’s playoff victory. The 29-year-old BYU alum recorded three blocks and three goals, both season-highs, as the Salt Lake D-line earned 17 blocks and broke the Growlers offense nine times.

Whether he’s playing O-line, D-line, or in the case of Saturday night, on both lines, Vohnoutka is a difference-maker for the Wind Chill. He totaled four assists and two goals, numbers that don’t even begin to tell the story of his versatile contributions to the Wind Chill’s first playoff win in franchise history. He played 11 O-points and nine D-points, bouncing back and forth as a valuable flex-threat that Minnesota will undoubtedly utilize this Sunday in Chicago as the Wind Chill now try to earn their first trip to Championship Weekend .

The younger Yorgason brother, 22-year-old Chad, was the only D-liner amongst the three playoff games this past weekend to produce at least 100 throwing yards and 100 receiving yards. He finished with over 321 total yards, including 213 throwing, while recording two blocks and tossing three scores for Salt Lake, the fifth time this year he’s had multiple assists and multiple blocks in the same game. In three matchups against the Growlers, including Saturday’s playoff game, Yorgason has tallied 10 assists and eight blocks while playing 67 D-points and just seven O-points.