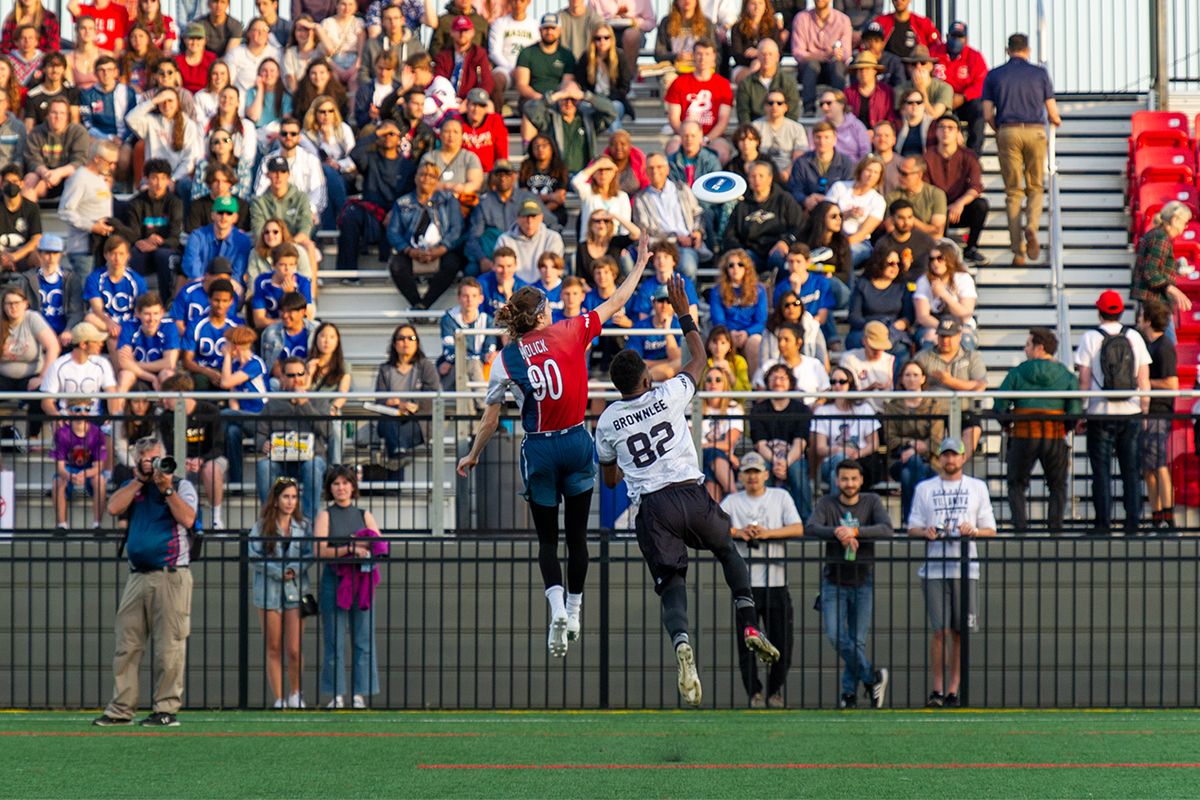 The league’s biggest rivalry takes center stage tonight, as the DC Breeze travel to New Rochelle to take on the undefeated New York Empire in the Week 7 Friday Feature. New York won the first meeting of the season in Week 1, taking down the Breeze in DC 22-19.

DC and New York have met six times since the start of 2019. Every game has been decided by three goals or fewer in that span. DC has won just one of the six games—accounting for a third of the Empire’s total losses since 2019—as they ended New York’s undefeated streak last year with a 20-17 win at home.

This year, New York has assembled one of the most talented, most efficient teams in AUDL history. Headlined by 2021 All-AUDL selections Jeff Babbitt, Ben Jagt, Ryan Osgar, and Jack Williams, the Empire have never lacked star power, but it’s the depth they’ve built up behind their primary playmakers that have allowed them to ascend to unquestioned championship favorites. John Lithio is having a fantastic year in his second season, ranking top three on the team in goals and receiving yards. Charles Weinberg has made for a seamless fit on the Empire offense, adding another striker skillset to an all-star lineup of hybrid cutters. Solomon Rueschemeyer-Bailey and Elliott Chartock continue to excel holding down the fort in the offensive backfield, while star-level additions Antoine Davis, John Randolph, and Jibran Mieser have all made their presence felt on the D-line.

It’s almost getting to be more talent than they know what to do with, and the coaching staff has done a great job playing with rotations. Babbitt has played primarily O-line each of the last four games after starting the season on defense; the switch has helped make him the third-leading goal scorer in the league. Two-time reigning MVP Ben Jagt switched to D-line last game and still put together an impressive all-around stat line of three assists, two goals, and three blocks. Even with the switch to D-line, Jagt is tied for the league lead in goals and ranks first in receiving yards. Slotting him on defense with Davis and Mieser gives the Empire a cutting core better than that of most other team’s O-lines, and the fact they can still cross over an O-line guy like Williams, Osgar or Lithio gives them the potential for one of the most unstoppable counterattacks in the league.

DC’s counterattack is right up there with New York, actually ranking best in the league in D-line conversion percentage with a 66.7 percent rate. The problem for DC has been defensive pressure, as they haven’t been forcing turnovers at anywhere close to the same rate as they were last year; in 2021 they ranked second in the league in blocks per game (11.8) and 10th in turnovers against per game (19.9) while they rank 22nd (7.3) and 24th (14.8) respectively in both categories this year. The Breeze allowed Toronto—a team that New York thrashed for a 25-8 win last week—to score 26 goals two weeks ago, while a severely depleted Boston team stuck around for 20 goals last week. They’ve allowed 20-plus goals in three of four games this season, the same amount of 20-plus goal games they allowed all of 2021.

While their early defensive struggles haven’t helped them get to 3-1, the Breeze offense remains one of the best units in the league. A nearly all-hybrid approach has them rotating eight or nine guys most games between handler spots and initiating cutter positions, cycling their offense throughout entire points as they progress down the field. Rowan McDonnell has a notable burst to his game that he was lacking last season, as he’s gotten more aggressive both as a thrower and a downfield cutter. He leads the team in basically every throwing category, in addition to total yards, and he should continue to be featured in a variety of ways throughout the season. Jacques Nissen was added to the lineup last game and predictably slotted right in to the hybrid-centric offense; he paced the team with seven scores and over 200 throwing yards. Alan Kolick is another guy we’ll likely see in the mix, who returns to action after missing the last two games. Against New York in Week 1, Kolick had three assists, a goal, and a block on a perfect 30-of-30 throwing day.

Chicago set the record for most efficient offense in league history with a 64.6 percent conversion rate last season. DC currently sits at 67.0 percent (third best). New York at 72.2 percent (best). This game will be defined by offensive efficiency, and whichever team can limit mistakes enough to out-convert the opposing O-line. Regardless of the outcome, this game is a nearly guaranteed playoff preview, with both teams in a clear tier above the rest of the division.