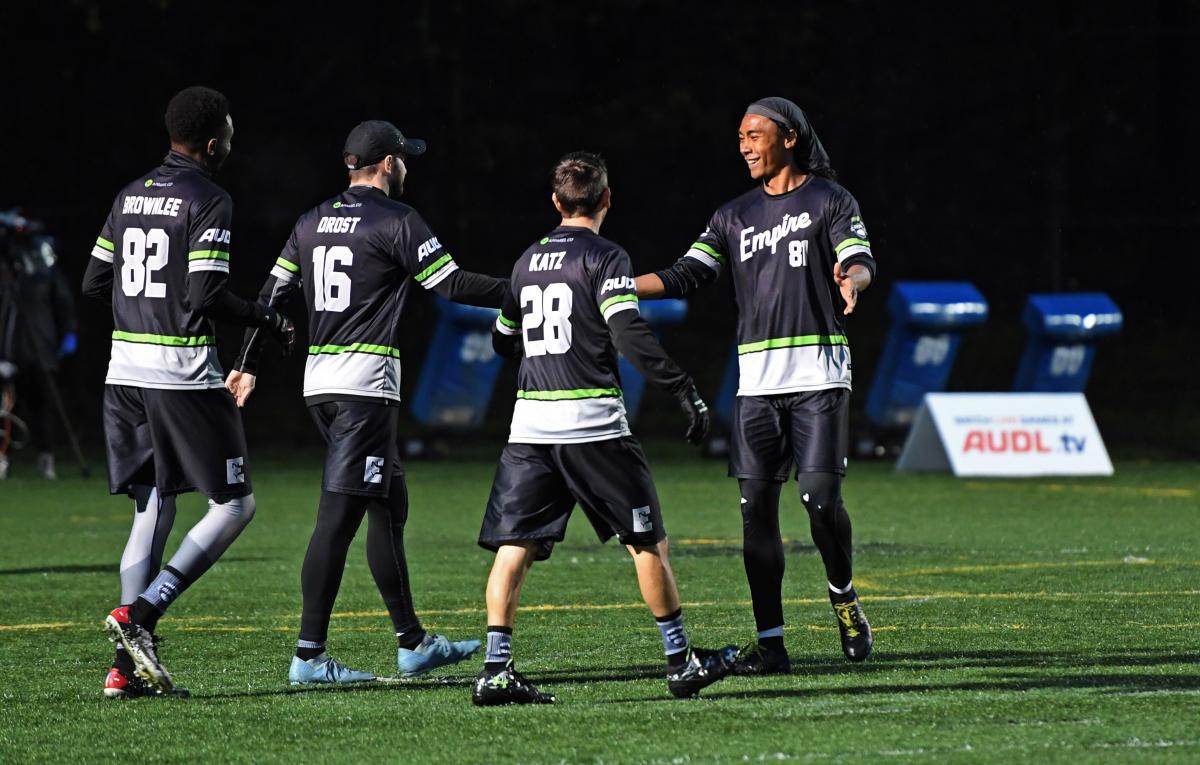 Tonight the New York Empire and Montreal Royal face off for the first time since 2019 in the Week 5 Friday Feature. For the Empire, it’s the first of two games this weekend as they head north to Canada for a doubleheader road trip.

Despite currently sitting first and second, respectively, in the East Division standings, New York and Montreal have had vastly different seasons. The Empire are undefeated through their first four games and have looked mostly untouchable in large part due to their league leading offensive efficiency. The Empire O-line is converting on 70.8 percent of its possessions; the single-season record for O-line conversion percentage was set last year by Chicago at 64.6 percent.

The Royal, on the other hand, rank just one spot ahead of the Detroit Mechanix with an O-line conversion percentage of 47.6 percent, seventh worst in the league. Their best game came in Week 1 against the Rush, but they’ve now seen their efficiency decline in every game since and have turned the disc over 20-plus times in four straight. Aside from the win over the last-place Rush, Montreal defeated a severely shorthanded Boston squad playing the second game of a back-to-back, and they took down Philly on a 50/50 jump ball buzzer beater.

New York’s offense should continue to boast all-time efficiency numbers this weekend in Canada. They’ll be missing a pair of O-line starters in Solomon Rueschemeyer-Bailey and Charles Weinberg, but they’re adding back Jack Williams, who was absent for last week’s 31-17 win over Toronto. While Rueschemeyer-Bailey and Weinberg are both extremely steady contributors when active, the Empire have more than enough depth to replace the production. Williams can fill in alongside Elliott Chartock in the backfield, maybe we see Ben Katz cross over to the O-line, and downfield they can slot in the AUDL’s third all-time leading goal scorer in Matt Stevens, or load up the line with another big in Jeff Babbitt. It’s truly an embarrassment of riches for New York this year, and they should be able to run through a Royal defense that was only able to muster a single break against DC two weeks ago.

There’s not much the Royal can do about slowing down the Empire offense, but one guy they’ll be happy to have back this week is defensive playmaker Christophe Tremblay-Joncas. CTJ was inactive for last week’s game against Philly and his presence was missed, particularly on the counterattack; the Royal converted just two of 15 break opportunities last week. Tremblay-Joncas has 22 blocks in his last 13 games dating back to last season, and he’s shown an offensive dimension to his game this year averaging over three scores per game. But going up against Ben Jagt, John Lithio, and maybe even Babbitt, it feels like this Royal defense will simply be overmatched.

The key will be their offense. The only real way they can win this game is somehow trading blows with New York and putting together a performance reminiscent of their Week 1 win over Toronto when they limited turnovers to 13 on the night. It’s either that, or you pray for bad weather (or the wind to gust only for every Empire throw) to bring the Empire down to the Royal’s level, a little like what we saw from New York in Week 2 against Philly.

Of course, the Montreal offense running through the New York defense sounds arguably just as impossible as their defense stopping New York’s star power. The O-line does add back two key cutters in Malik Auger-Semmar and Nabil Chaouch, but they’re expected to be without their pair of French goal scorers in Sacha Poitte-Sokolsky and Quentin Bonnaud. Jakob Brissette will need to play close to flawless, which is a tough ask when the team has been missing Vincent Lemieux, who brought an additional deep-throwing dimension to the O-line all last season. Without Lemieux, the pressure has fallen on Brissette to generate the vast majority of the offense for Montreal; he leads the team in total yards by nearly 1,000 more than the next closest player, but he’s averaging close to three throwaways per game.

Up against a D-line that has punched in over 50 percent of their break opportunities in three of four games this season, this game could get out of hand early if the Royal offense struggles to limit turnovers. Antoine Davis is coming off his most productive game in an Empire jersey after demoralizing the Toronto O-line with two blocks, six scores and over 300 yards of offense without a turnover. The New York defense broke Toronto 16 times last week, most breaks by any team in a game this season.

With the Empire coming off their highest-scoring game in the last three years, and the Royal having already lost by 10 to the other East Division powerhouse in DC, Royal fans could be in for a long night in Montreal. A near-perfect, under-10-turnover game from the Royal offense could be their only chance here. Or who knows: maybe we learn that Charles Weinberg and Solomon Rueschemeyer-Bailey are THE key pieces to the laughably deep Empire O-line, and New York crumbles on the road.