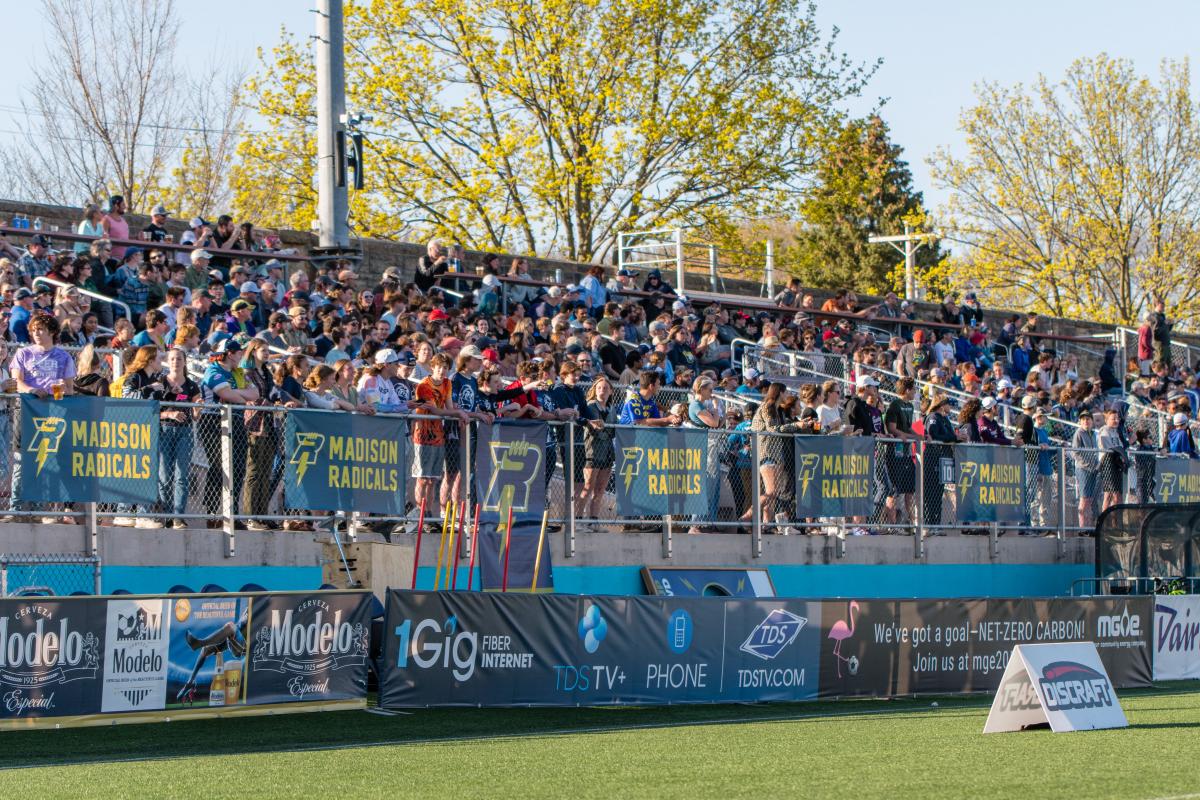 “I think that’s the weirdest game I’ve ever been a part of.”

That’s how Brandon Matis of the Wind Chill referred to last season’s 20-18 Minnesota win over the Radicals in overtime last June, the last time Minnesota played at Breese Stevens Field. Madison was up a goal with just two seconds left in regulation, but a last second Minnesota pointblock, followed by an Andrew Roy goal as time expired, gave the Wind Chill the shocking equalizer and momentum into the extra frame of action. The Wind Chill would go on to sweep the season series 3-0, the first time Minnesota has ever accomplished that against their longtime border rivals in eight seasons of matchups with Madison. 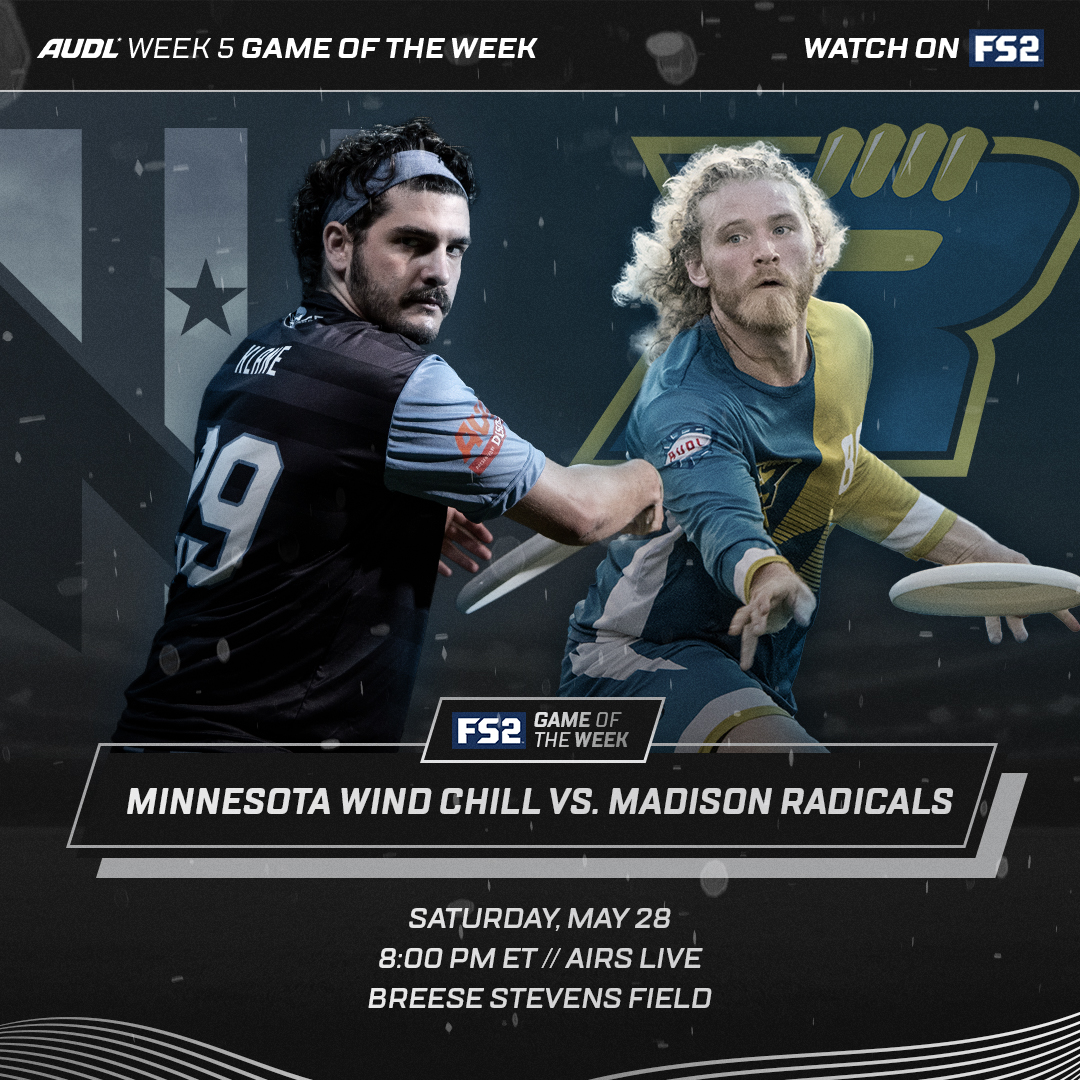 But Madison has started the 2022 season committed to ending their two-season playoff drought, and are one of just six teams with undefeated records heading into Week 5. And with a raft of injuries, the Radicals have earned their wins with a rotating lineup. The team will be without top receivers Jack Kelly and Jacob Wham on Saturday night, but the return of Sterling Knoche after a two-game absence will be a big addition for the Madison offense. Knoche had three goals and 237 yards receiving in Madison’s Week 2 win, continually finding the disc in deep space.

The engine that has powered the Radicals attack so far this season has been the steady play of their backfield throwing core of Victor Luo, Josh Wilson, and Kai Marcus. Wilson is having a renaissance in his 10th year in the league, leading the team in completions and averaging close to 230 throwing yards per game. Luo has been the initiator and pacesetter for this offense when it is playing at its peak level, and has averaged three scores and over 400 yards of total offense per game dating back to the beginning of last season. Questionable with an injury entering this game, Marcus has been a difference maker for his big throws, helping add a vertical dimension to the balanced attack of Wilson and Luo; after ranking last in the in AUDL in huck completions per game (5.3) in 2021, the Radicals have increased their range and are completing seven per contest this season, good for 15th.

Entering the season as the presumptive favorite to win the Central Division, Minnesota dropped their Week 2 home opener to Chicago before bouncing back on the road in Dallas the next week to even their record at 1-1. Top cutters Nick Vogt, Cole Jurek, and Quinn Snider—the latter of whom leads the team in goals (12) and receiving yards (472) this season—are inactive, leaving the Wind Chill O-line with some holes to fill against a top tier Madison defense. Bryan Vohnoutka had four goals and the game-changing jump block in his last trip to Madison, and figures to be a featured part of Minnesota’s attack. Captain Rocco Linehan also had a lot of success against Madison in 2021, averaging almost five scores and over 300 yards of offense in three games; Linehan often starts downfield as a receiver, but is dangerous as a continuation thrower when he finds his rhythm. 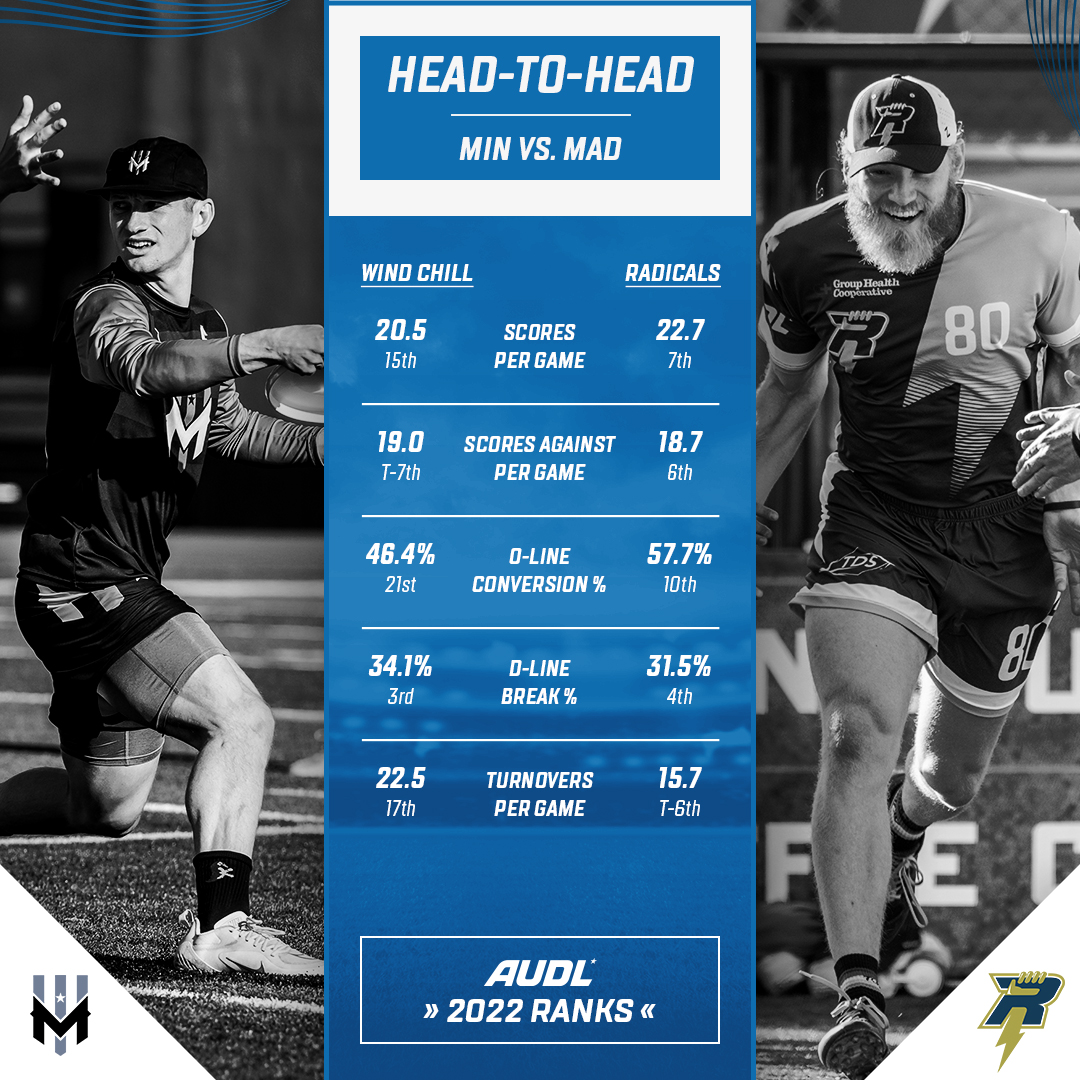 Defensively, both teams are top 10 in takeaways and top five in break conversions, meaning both offenses will have to limit mistakes to disarm each team’s dangerous counterattack. The return of veterans Thomas Coolidge and Kelsen Alexander to the Radicals D-line has provided them with two rock-solid distributors capable of quarterbacking entire drives. Minnesota converted 10 break scores in their Week 3 win, as Brett Bergmeier and Abe Coffin anchored many scoring possessions. Minnesota won the turnover battle in all three of their victories in 2021, and were able to create significant disruption for Madison’s offense; Dylan DeClerck was a menace in the midfield last June at Breese Stevens, earning five blocks in the opener.

The Wind Chill have won two of their last three meetings with the Radicals in Madison, with both losses arguably denying the Radicals from the playoffs in each of the past two seasons. Breese Stevens used to be an impenetrable fortress of winning for the Radicals, and Madison’s renewed focus in 2022—as the city prepares to host 2022 AUDL Championship Weekend—has them believing in the magic of home field advantage once again.