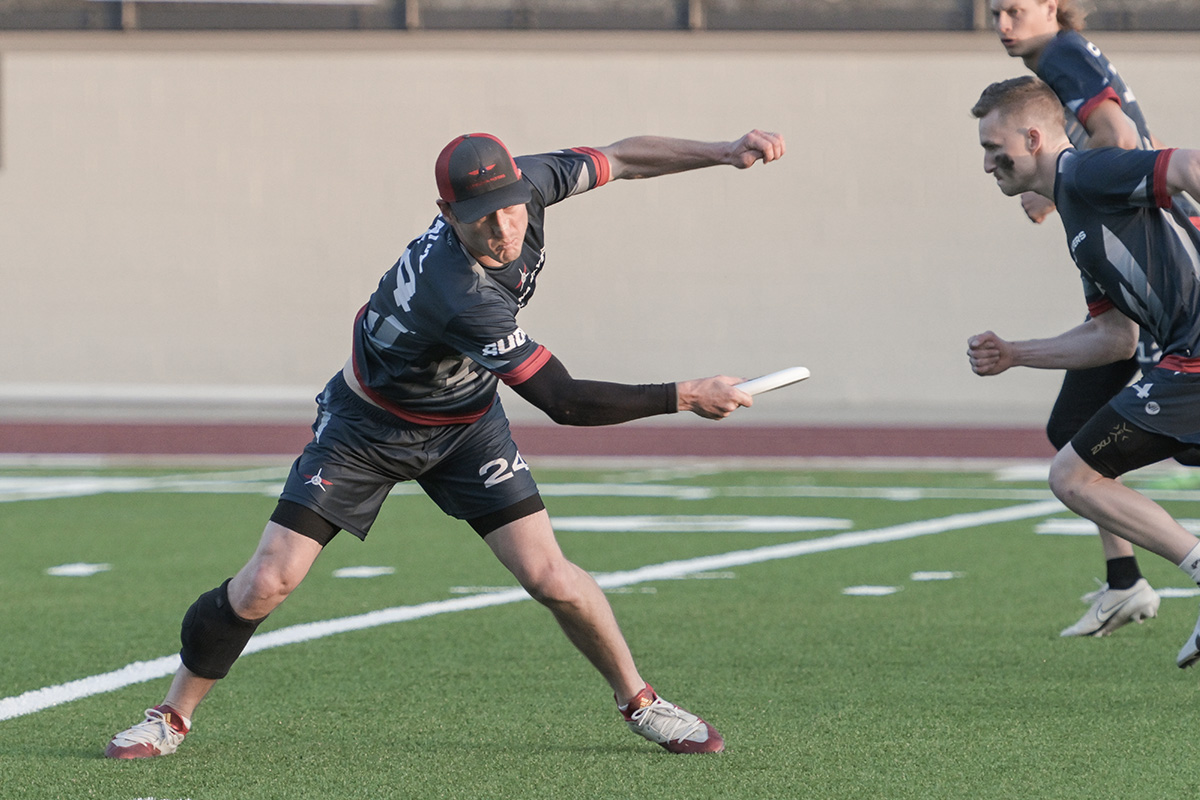 The two remaining undefeated teams in the South Division meet tonight in Durham, as the Austin Sol take on the Carolina Flyers in tonight’s Friday Feature. It’s the first meeting between the two teams since 2019; Carolina has won seven of nine meetings all time. 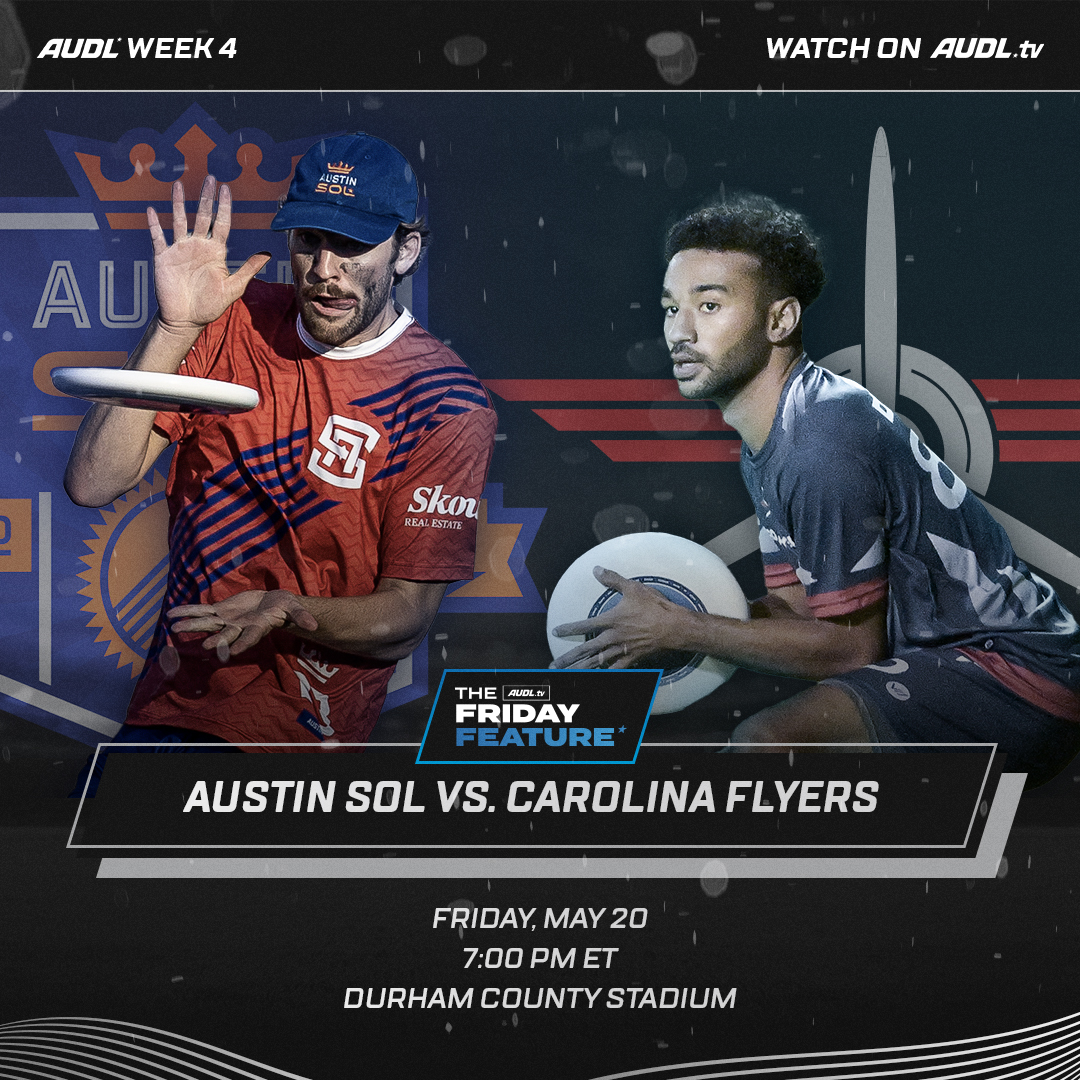 Austin is coming off two straight wins over Dallas that came by an average of five goals, officially flipping the narrative in Texas to start the season. The Sol finished with fewer than 20 turnovers in both games, something they only managed in three games last season. Thanks to a revamped offense featuring key additions in Jake Radack, Kyle Henke, and Mark Evans, the team boasts an O-line conversion rate that currently ranks ninth best in the league.

Radack has been leading the charge for the Sol offense, with over 400 more total yards than anyone else on the team. He’s been the team’s primary distributor and has shown the ability to run through defenses with sharp handler cuts and precision throws downfield. He’s got a strong set of receivers to target in Evans, Henke, and second-year Sol captain Evan Swiatek, who have combined for nearly 1,500 receiving yards through the first two games, proving to be reliable options that can all continue the disc downfield after initiating cuts.

Up against a defense known to lock up opposing backfields, Radack will face what could be his toughest test of the year against the Flyers. Carolina has their core of primary handler defenders all active for tonight’s game, a group that features some rotation of Ethan Bloodworth, Elijah Long, Tim McAllister, Suraj Madiraju, Noah Saul, and Seth Weaver. Their depth at the position is unrivaled, and their collective ability to play tight matchup defense combined with timely switches and poaches allows them to provide constant pressure that we’ve seen repeatedly wear down opponents over the course of a game. They forced high stall counts all night in their Week 1 win over Atlanta, and when paired with an efficient low-turnover offense, the Flyers have a proven recipe for success in grinding out wins.

The team will be missing a chunk of playmakers this week in Henry Fisher, reigning Rookie of the Year Anders Juengst, and one of the league’s top all-around chess pieces in Eric Taylor. Alex Davis filled in about as well as anyone could for Juengst last week, totaling 10 scores and nearly 700 yards of turnover-free offense against Tampa Bay. Ultiworld’s 2021 D1 Men’s Offensive Player of the Year has proved he can torment pro defenses just as easily as college, and he should stay busy tonight with the slightly depleted cutting core. The absences will also put an added emphasis on the Flyers backfield, led by Sol Yanuck and Matt Gouchoe-Hanas. The duo has completed 97.4 percent of their throws dating back to the start of the 2021 season, and Gouchoe-Hanas has yet to turn the disc over in 2022.

With the Flyers averaging fewer than 13 turnovers per game this season, the Sol defense is going to have to take full advantage of break opportunities if they’re going to have a shot at taking down the champs. From their first game to their second, the Sol upped their D-line conversion rate from 38 to 57 percent, finding an offensive rhythm after turnovers led by 2021 O-line standout Eric Brodbeck. But the Flyers are stingy, even after turnovers with their O-line defense; the team has allowed their opponents to record a break on just 11.8 percent of opposing D-points, lowest in the league. 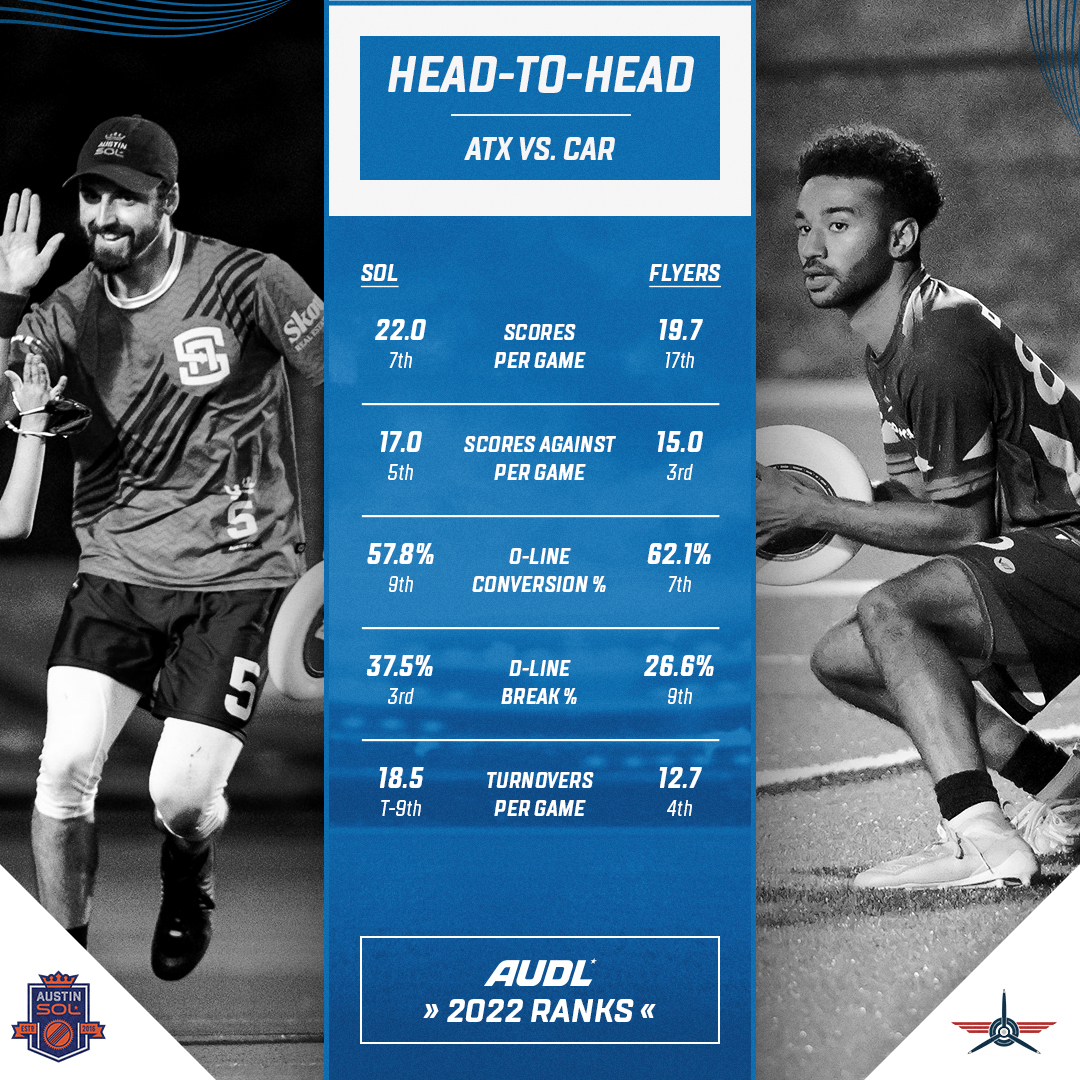 The Sol may need to adjust their game plan if the Flyers’ handler pressure forces Radack out of rhythm, though their offense could be well-equipped to adjust with a talented set of hybrids operating downfield. Even with Carolina’s missing starters, they have the depth to put together their typical high-efficiency game, putting the pressure back on Austin to play their cleanest game of the season to have a chance at pulling off the upset.