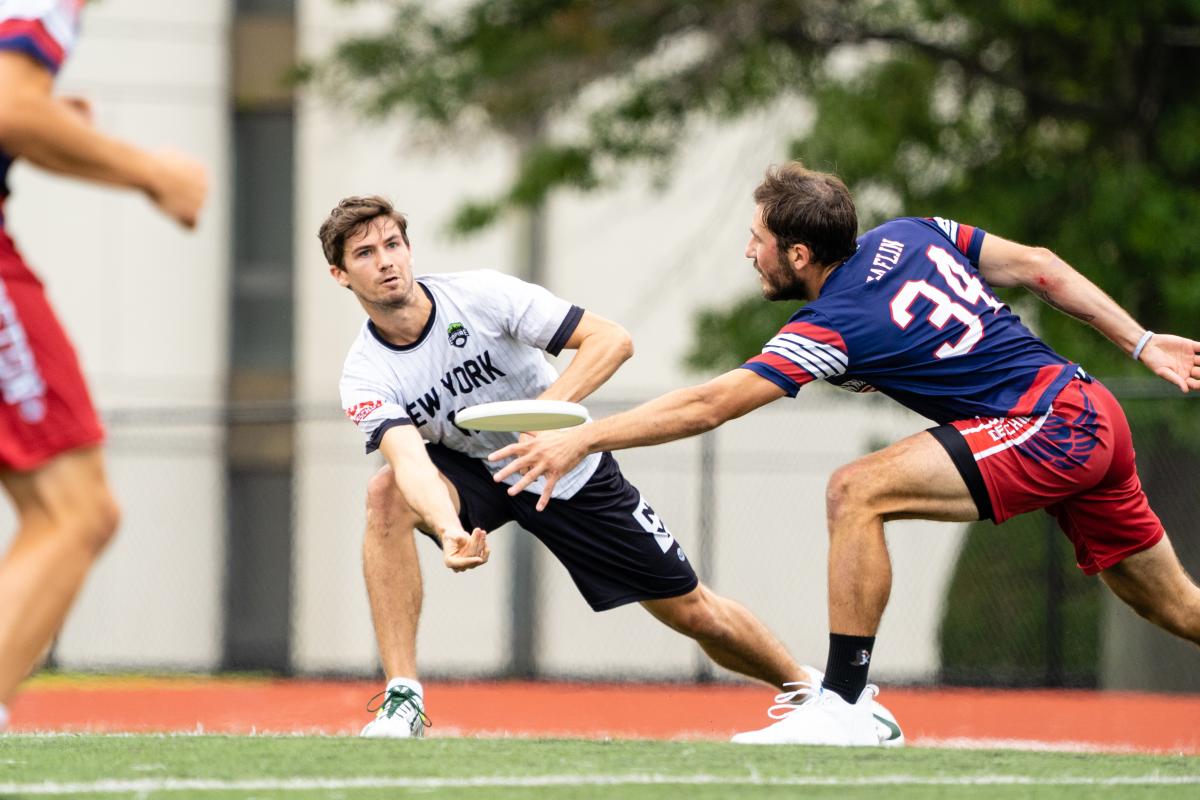 Since the beginning of the 2019 season, the New York Empire have become the standard for winning in the AUDL. They have a 24-2 record in their last 26 regular season games, a two-time MVP (Ben Jagt), a handful of All-AUDL starters, an AUDL title, and a 2-0 spot atop the East Division standings to start 2022. 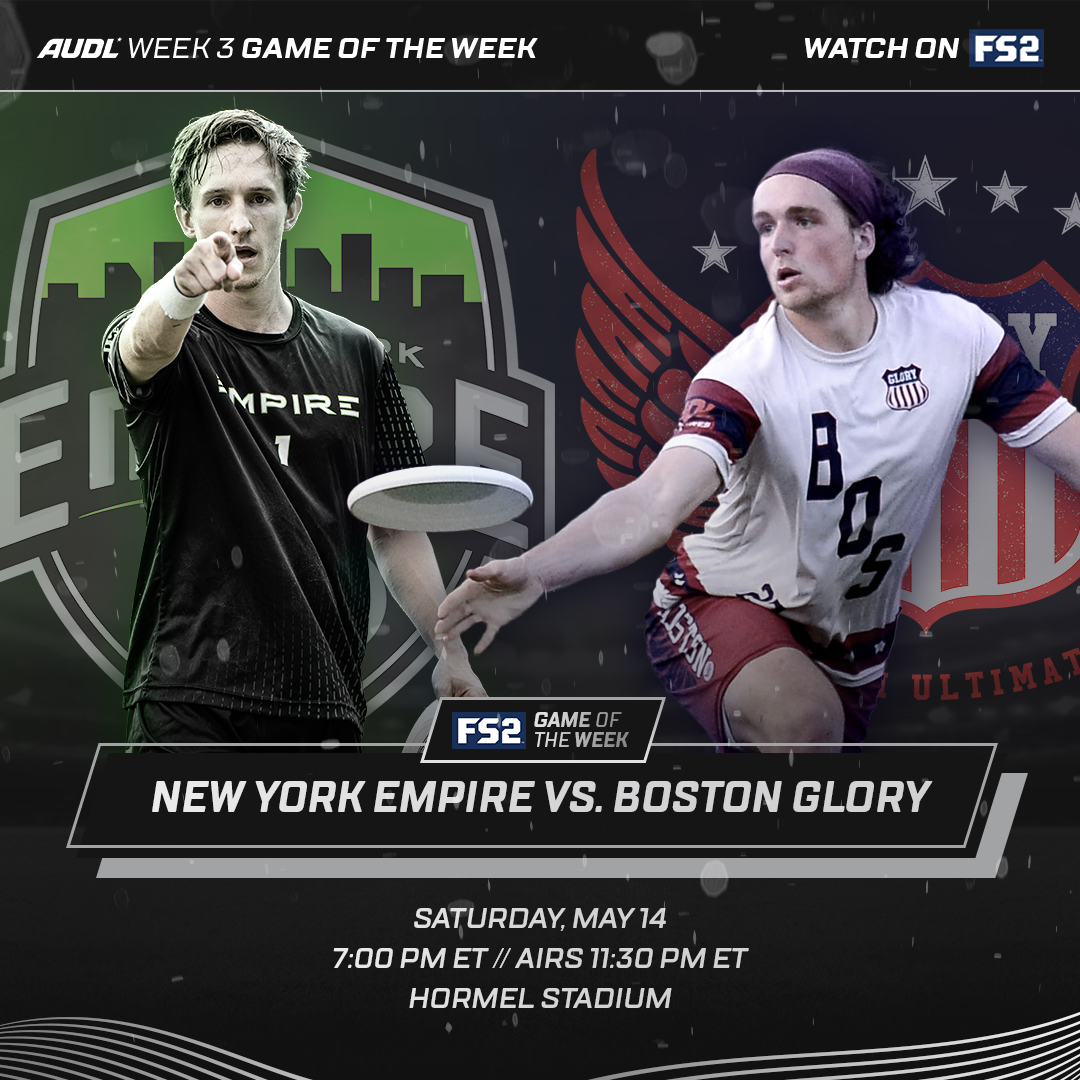 The Empire offense has been the second most efficient unit in the league through the first two weeks of the season, converting on over 70 percent of their offensive points. Jagt alongside Ryan Osgar and Jack Williams are once again the most fearsome three-headed attack in the league, and the balancing pieces surrounding them are better than ever. Elliott Chartock is a rock-solid distributor, and he looks even more precise and comfortable in the Empire system in year two with the team. The 6’5” John Lithio continues to be a matchup problem for opposing defenses when lined up opposite Jagt; almost quietly, Lithio has seven goals and 460 yards receiving in the first two games. And Solomon Rueschemeyer-Bailey has taken a step forward this season, and could be this team’s next star; Rueschemeyer-Bailey has yet to commit a throwaway in 71 passing attempts this season, and has a pair of timely blocks—one in each game—that were huge get-back interceptions for the O-line.

Stopping the Empire attack is hard enough as it is. But scoring against them, even in the unlikelihood that they would yield a turnover, is an even harder proposition for defenses. With players like Jagt, Williams, and Rueschemeyer-Bailey all capable of playing lockdown defense, the Empire have the fourth lowest opponent break rate in the AUDL; through two games, New York has surrendered just five break scores to opposing defenses. 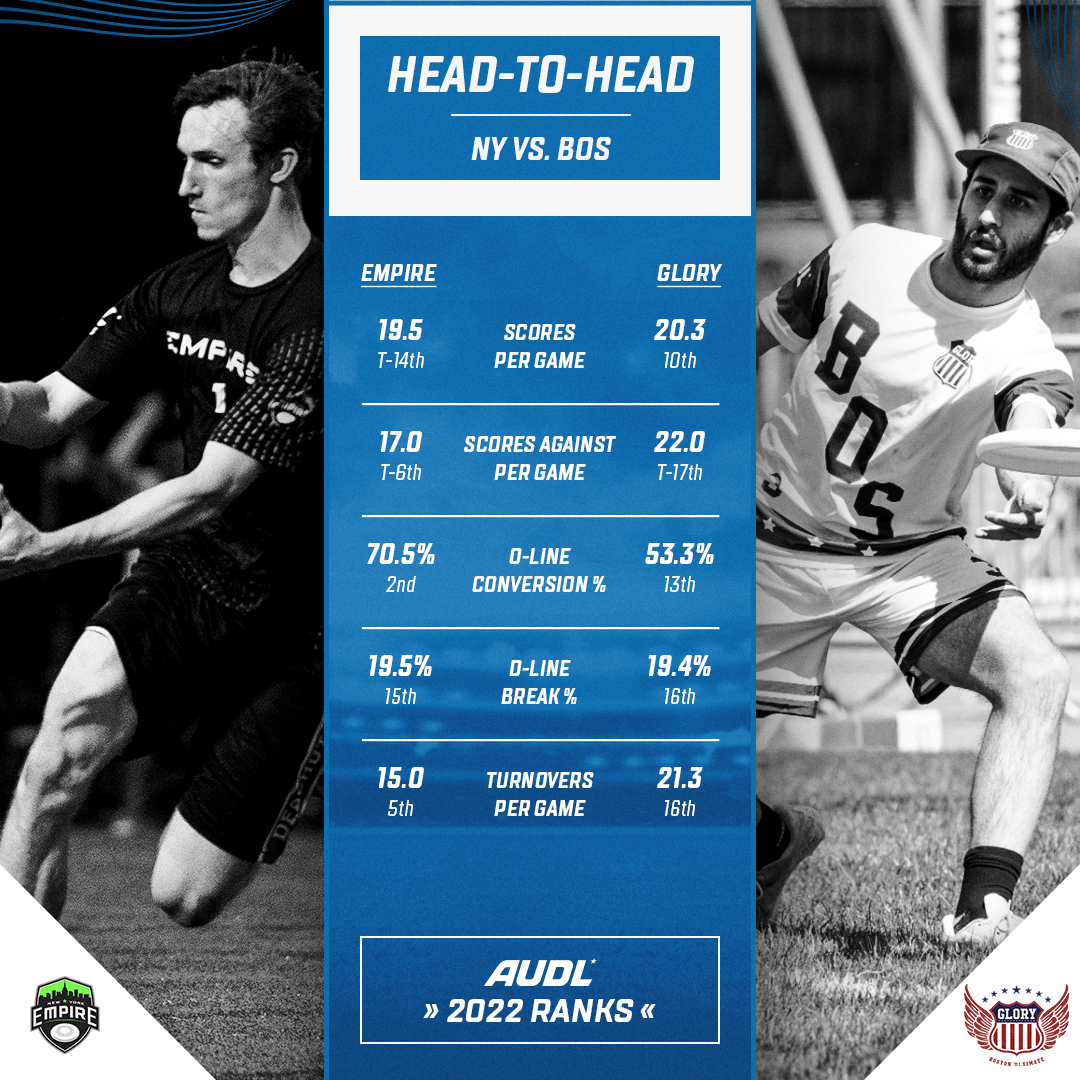 And while on paper Boston’s D-line appears to be at a severe disadvantage against this NY lineup, the last time these two teams met, Glory gave the Empire everything they could handle as New York eked out a 18-17 win in a defensive struggle. It was a rare showing for Boston, but it does bode well for their matchups on Saturday night against the Empire; in 15 matches since joining the league in 2021, Boston has given up 20 or more goals in 11 games, including all three so far this season.

There are defenders in the Glory rotation like Cam Wariner and Chris Bartoli who can earn takeaways, even against top line units like New York. But the biggest source of instability for this D-line has been its ability to convert turnovers into break scores. Last weekend in Canada, Glory had their opportunities to get back into games against Ottawa and Montreal by earning 21 blocks, including one of the best hustle plays in recent memory by rookie Ben Horrisberger. But Boston converted just 8-of-26 break chances in the two games, dropping both matchups on the road.

Glory will be re-adding second year receiving behemoth Orion Cable back into the offensive lineup. Cable was absent for the team’s Week 2 road trip after tallying eight scores and over 500 yards of total offense without a turnover in Boston’s Week 1 home opener win. One of the premier big targets in the league, Cable will have a heavy workload on Saturday night as Boston will be without Tannor Johnson for a third straight game; New York has some of the best big defenders in the league with Jeff Babbitt, Antoine Davis, and Marques Brownlee all able to rotate onto Cable.

Even without their top receivers, the Glory handling core of Ben Sadok, Cole Davis-Brand, and Willie Stewart still generated a lot of action with their throws in Canada. Sadok is even sharper with the disc this season after earning All-AUDL honors in 2021, and Davis-Brand looks like a “Most Improved” candidate, able to take over entire drives with his passes and motion. Stewart might be the determining factor for Boston; he had a career game against New York in their last meeting, throwing six assists on 36 completions for over 500 yards of total offense without a turnover.

Whichever team can control deep space will have a sizable advantage, as both teams like to feed the disc to their big playmakers. Boston averages the third most hucks per game (11), while New York averages the fourth fewest allowed. As good as Cable has been for the Glory, without Johnson in the lineup, the Empire’s depth of talent may prove too much for the home team.