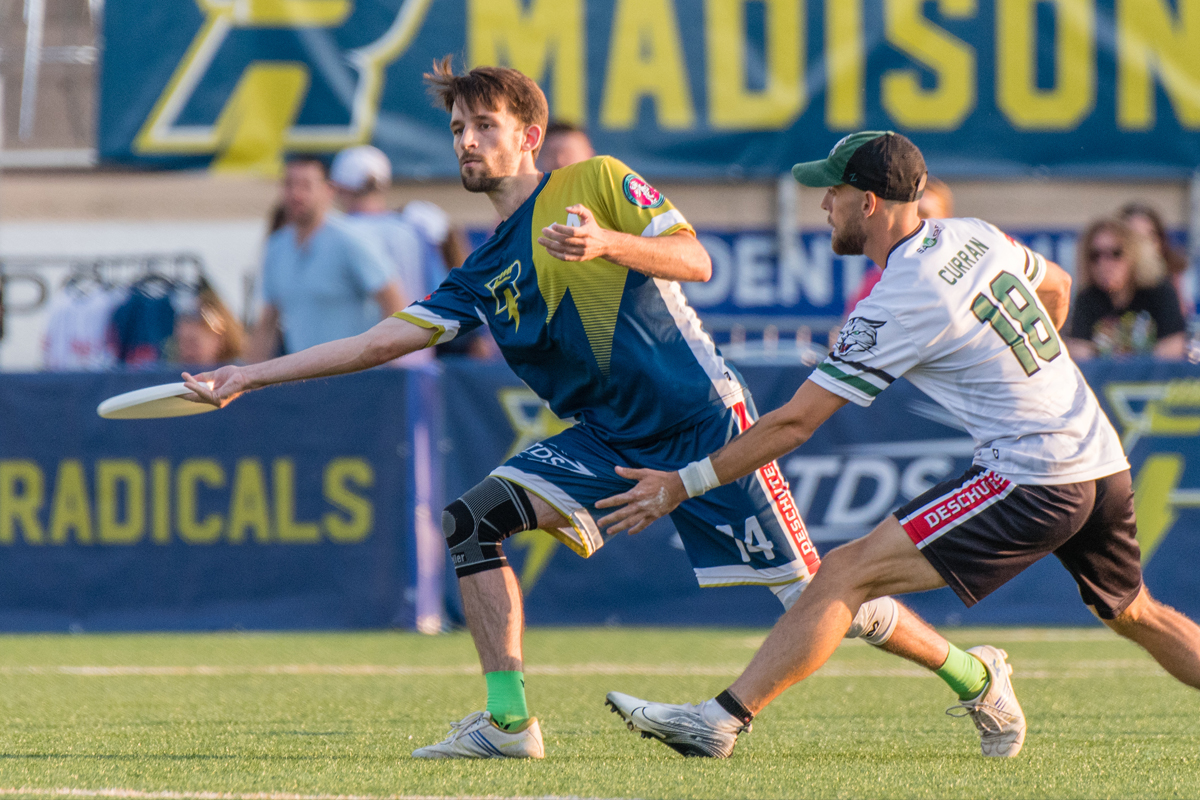 Watch "The Friday Feature" tonight at 8:00 PM/ET on watch.AUDL.tv

The battle for the three seed in the Central Division takes center stage tonight with the Indianapolis AlleyCats traveling north to take on the Madison Radicals at Breese Stevens Field. With both teams sitting at 5-4, the game will likely serve as an unofficial play-in game to determine the third playoff team in the division. 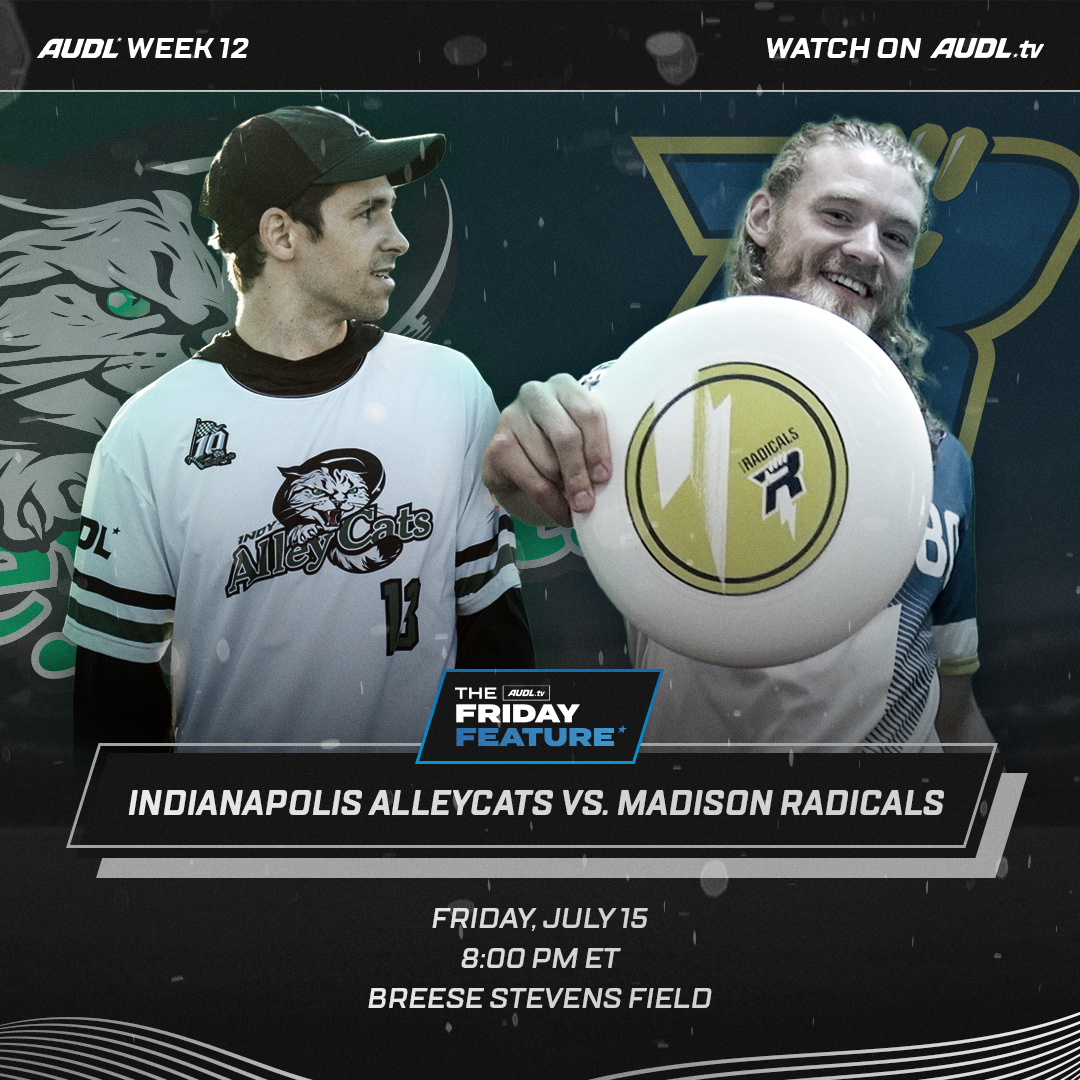 The playoff picture is as follows. The Radicals will need to defeat the AlleyCats, then take down Detroit the following day to clinch the third seed. The AlleyCats, on the other hand, will need to defeat the Radicals by two or more goals to earn the tiebreaker in the season series, then they’ll need either another win against Minnesota or Atlanta, or a Madison loss—Madison plays Chicago in the final game of the season—to secure the ‘Cats a spot.

In their Week 3 meeting in Indianapolis, the Radicals overcame a two-goal deficit late in the fourth quarter to pull off the comeback win over the AlleyCats. Both teams finished with exactly 15 turnovers on the day, and it was the Radicals offense that outplayed the AlleyCats’ throughout the game to put the team in position to rally late. While they converted 64 percent of their offensive possessions that night, the Radicals O-line would only match that efficiency level once over their next six games. That is, until last week.

Up against what had been the strongest defense in the division, the Radicals had their most efficient offensive game of the season last week against Minnesota. They controlled the game from the start, never allowing the Wind Chill to string together multiple breaks, as they yielded just eight D-line possessions all game. With their most full strength O-line yet, the Radicals rallied behind a career-high 457 throwing yards from starting handler Victor Luo, while top cutter Sterling Knoche had a career day of his own with eight goals. Second-year handler Henry Goldenberg looked as reliable as ever as a complementary piece and totaled a career-high seven scores; teaming up with Luo allows them both to rotate in and out of the backfield to more freely facilitate the offense. Eighth-year vet Thomas Coolidge shifted over to the O-line while Kevin Pettit-Scantling returned home to defense, and all of a sudden the Radicals seem to have all of their pieces in the right places heading into the playoff push. 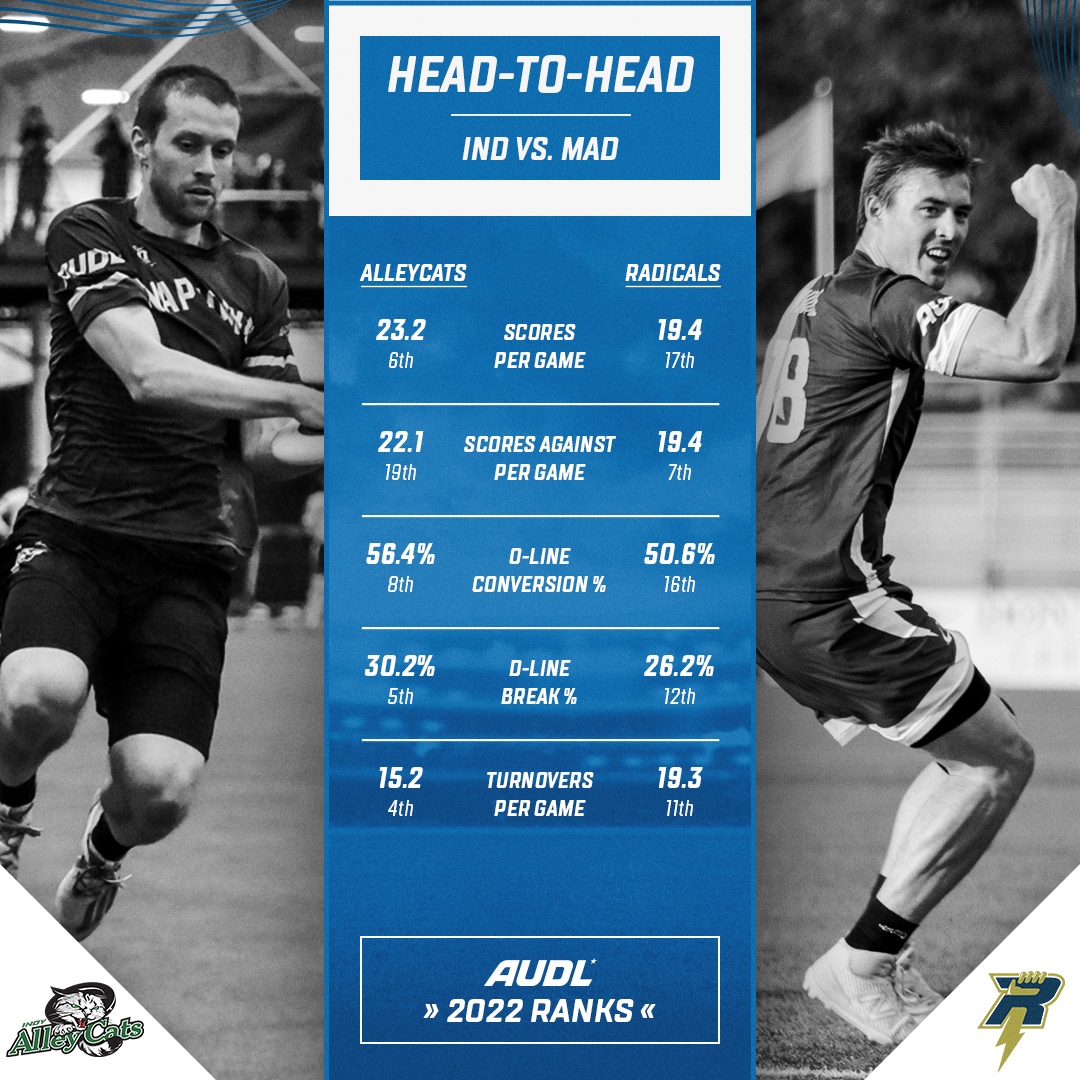 Still, they’ll need to show more week-to-week consistency on the offensive side if they plan to make a run in the playoffs, something the AlleyCats have been fairly good at this season. The ‘Cats have finished with 15 or fewer turnovers in seven of their nine games, though five of those seven came playing indoors at home—teams average 14.2 turnovers per game playing at Grand Park this season. When the AlleyCats offense is in rhythm, it legitimately looks like one of the best in the division. Keegan North embodies the offense’s constant flow state, with the ability to trade shots with Levi Jacobs on both the throwing and receiving end as the team’s go-to continuation options. Cam Brock now has his ninth 40-goal season, including playoffs, and continues to repeatedly dust his defenders downfield. In the backfield, Carter Rae and Lucas Coniaris have filled in admirably to create a makeshift Travis Carpenter-less handler set.

But for as good as their offense has looked at times, Indy has still yet to win a game against Chicago, Madison, or Minnesota since 2019, and we haven’t seen a convincing outdoor performance this season aside from when they’ve played Detroit or Pittsburgh. In their last two road games against winning teams, they lost by 15 to Minnesota and by eight to Chicago, and they finished with 24-plus turnovers in both games.

Madison has the momentum advantage heading into this game, and their defensive showing against Minnesota deserves just as much credit as their offense. The Radicals rank top 10 in D-line conversion rate, opposing O-line conversion rate, and scores against per game. They seem to have found an ideal mix of young guys and vets, with KPS and Andrew Meshnick leading the way while rookies Jake Rubin-Miller and Matt Tucker rank first and second on the team in blocks, respectively. There are playmakers all over the field, and the way they force offenses to work at every possession—the Radicals force the most completions per game of any team in the league—has resulted in both forced and unforced errors of which they’ve done a steady job taking advantage.

On the other side, the AlleyCats defense has notably been missing Nick Hutton the past few weeks, who leads the team in blocks with 14. Indy has recorded double digit blocks as a team in just three games this season and has generally lacked the playmaking needed to spark significant defensive momentum. They have, however, been extremely efficient with their break chances this year, having converted a league-leading 68 percent of their D-line possessions, an efficiency rate better than every offense except New York’s. Xavier Payne has been the ideal D-line quarterback, while Fletcher Hare and Jacob Fella have both made plenty of plays in transition to bookend defensive drives. Indy’s ability to punch in breaks could prove critical against a Madison team still in the early stages of establishing their offensive identity.

The AlleyCats have won in Madison just once ever, an 18-15 victory in 2019. In that game they out converted the Radicals 61 to 31 percent on O-line possessions, as Indy’s offensive flow proved too much for the home defense. Both offenses will look to establish a rhythm early tonight, and it’ll likely be a question of which can maintain that consistency over the course of the full game that will determine the winner.