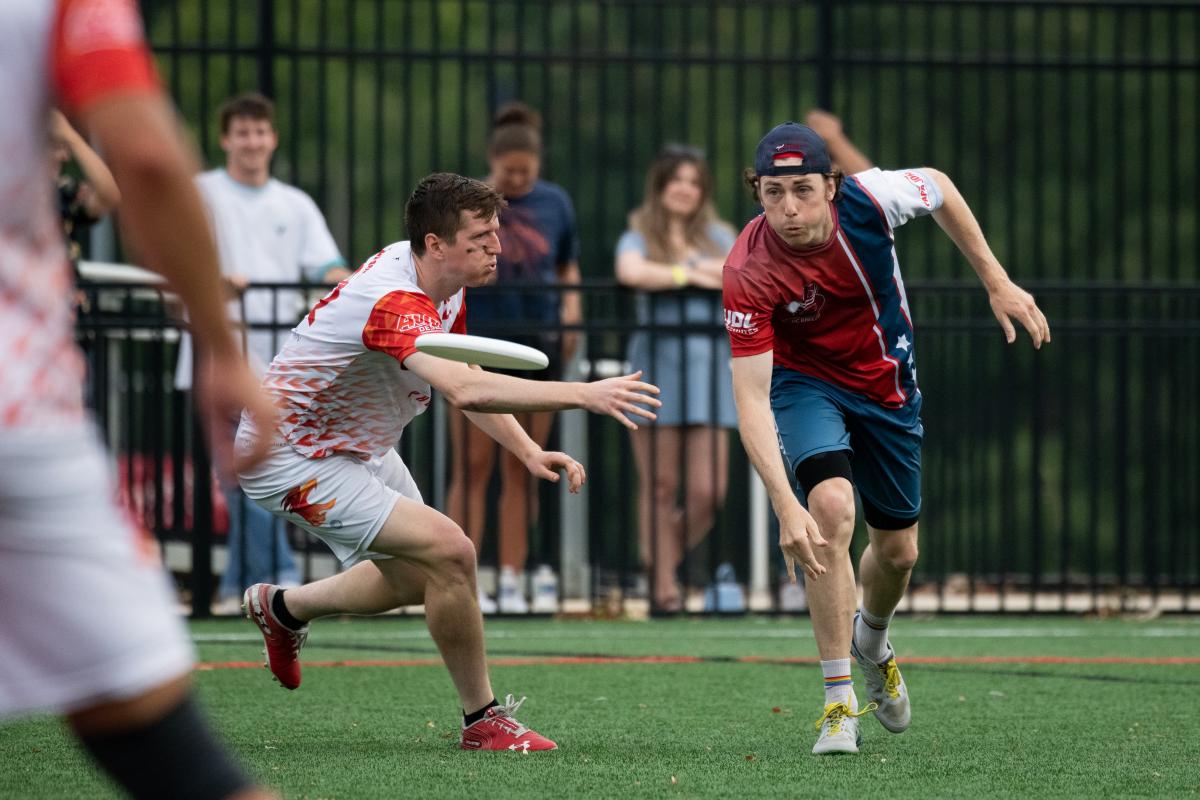 A rematch of last week’s one-goal game between two East Division playoff contenders, the Philadelphia Phoenix head to DC this week to take on the DC Breeze in what’s looking more and more like a round one playoff preview. The Phoenix had won four straight prior to the loss to the Breeze last week, while DC has defeated every non-New York opponent they’ve faced. 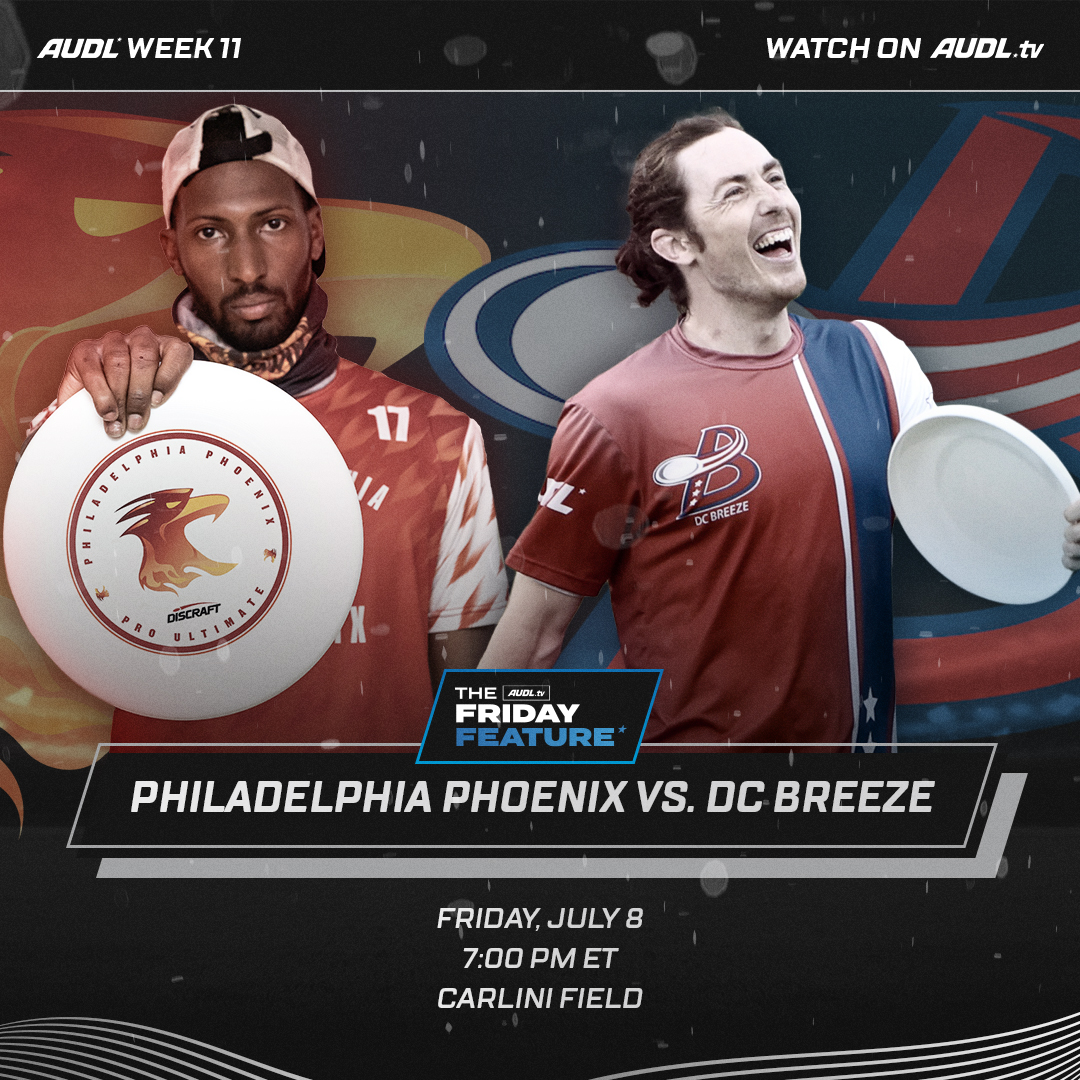 Despite the loss, Philly played one of their most efficient games of the season last week. Their 15 total turnovers were their second lowest mark of the season, and their O-line and D-line conversion numbers were the second best they had all year. Sean Mott and James Pollard both had strong games for the Phoenix offense, with Mott completing a perfect 21-of-21 throws with eight scores in his midfield hybrid role, while Pollard had his highest receiving totals of the season with six goals and over 400 yards receiving.

Still, huck throwaways were a problem for the aggressive Phoenix offense, as Pollard himself had three of the team’s 10, with starting handler Alex Thorne adding another three of his own. One key piece they were missing in their deep throwing game was Jordan Rhyne, who returns to the lineup this week and has completed 19-of-23 huck attempts (82.6 percent) this season, including going a perfect 6-of-6 over his last two games. No player in the league that’s attempted 15-plus hucks has connected at a higher rate than Rhyne.

Teams generally haven’t been attempting many hucks against DC, and last week’s game was maybe a good example why. With a D-line that features a handful of playmaking defenders plus the reigning Defensive Player of the Year in AJ Merriman, coupled with the fact that DC’s efficiency on offense puts pressure back on opposing O-lines to play a cleaner, maybe less risky, game, teams average just 9.4 huck attempts per game against DC. While that average marks the second lowest in the league, Philly nearly doubled it with 18 last week. More than half resulted in turnovers.

The way DC limits turnovers often turns games into a question of which team’s O-line can play more efficiently. And more often than not, it’s DC’s. They out-converted Philly’s offense last week 64 to 54 percent on their possessions, and the Breeze currently rank as the second-most efficient offense in the entire league, trailing only New York. Rowan McDonnell’s increased usage downfield, as with the rest of the O-line, has elevated the play of an entire unit that has adapted a ‘everyone’s a thrower’ approach to keep their offense fluid throughout every possession.

Against Philly last week, Jacques Nissen had a season-high 606 total yards, Christian Boxley had his second straight five-goal game, Tyler Monroe recorded six-plus scores for the third time this season, and Jonny Malks dished the game-winning assist. They’re getting consistent production from every player on the line, and it’s one of the most well-oiled machines in the league when it comes to week-to-week consistency. And to make matters worse for Philly, three O-line starters are returning to the lineup this week: Zach Norrbom, Joe Richards, and Jeff Wodatch.

With those additional pieces allowing DC to more continually rotate fresh legs onto the field, the Phoenix defense will have an even tougher task this week trying to contain the elite Breeze offense. Last week for the first time all season, the Phoenix failed to record double digit blocks as a team, only managing five against the Breeze. From a conversion standpoint though, the D-line was able to convert an impressive 6-of-9 breaks (66.7 percent), a significant step above their season average 44.7 percent D-line conversion rate. They’ll almost for sure need to match, if not exceed, that efficiency level against a Breeze O-line that has yielded nine or fewer opposing break chances in six of seven games this season.

At 4-4, the Phoenix have the inside track at the third seed but will still need a win or two down the stretch to lock up their bid and avoid East Division chaos. The Breeze have a +22 point differential in four games at home this season, and their wins have come by an average of 8.3 goals. With the Breeze offense showing no signs of slowing down, the pressure will be on Philly to one-up their team efficiency from last week in order to compete for the second straight week.