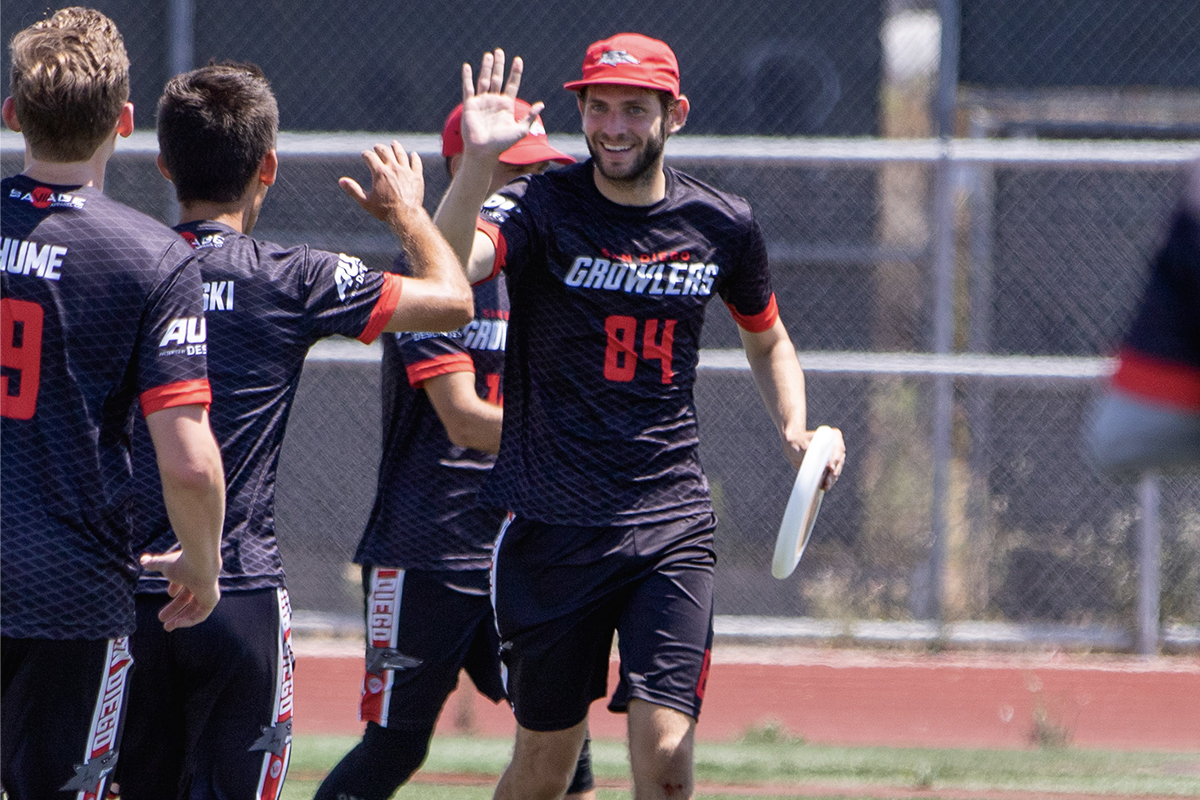 The San Diego Growlers converted on 81.5 percent of their red zone possessions last season, the fourth-highest conversion rate in the league. The offense consistently gave their best goal scorers room to work by setting a vertical stack and isolating cutters from the front of the stack.

The vertical stack is commonly used in the red zone because of the way it creates space on both the force side and break side. While horizontal stacks or other offensive sets may facilitate less-predictable continuation cuts, those continuations aren’t needed when a team is close to the end zone and can score in one throw.

The isolation of cutters in space is a key concept of the vertical stack, and with the stack often extending into the end zone or even out the back, the cutter that has the most room to work is the player positioned at the front—they can make a viable cut moving left or right, forward or backward. This is the play the Growlers turn to more often than not when they’re able to set up in the red zone; with the disc in the middle of the field, let the front-of-the-stack cutter take the time they need to get open on either side of the end zone.

Having a thrower that can consistently break the mark is key to optimizing this red zone set. In the above example, Tim Okita has the disc, and the Dallas mark sets up forcing Okita’s backhand (Okita is a lefty), wanting to force the disc to the near side of the field. Goose Helton is in the iso spot at the front of the stack, and his defender is positioned to take away an in-cut towards the disc. With the disc slightly off-center, the Growlers have adjusted their stack to angle towards the near side to keep the stack vertical from the thrower’s perspective. This positioning has left significant space on the break side, the space from Helton to the far sideline. Not needing much more separation, Helton takes off into that break-side space, running away from his defender to receive a perfectly-thrown flick from Okita.

Okita had to break the mark here; he threw the disc to the side his mark was looking to take away. The cut from Helton may not have happened had a different thrower had the disc, but he trusted Okita had this throw and as a lefty, knew he could step out and around the mark with his forehand. When the thrower has the ability to reliably put the disc to either side regardless of the force, the isolated cutter gets significantly more difficult to defend because the cutter can simply run away from their defender, to whichever side they’re not shading.

Isolating the front of the stack can also facilitate follow-up cuts when things aren’t as easy as a one-throw score. In the above play, the sequence begins with Paul Lally coming back towards the disc as the first iso option. After the cut, Helton is now at the front of the stack, so he activates to get the break-side throw from Lally. This time the scoring play actually comes from the back of the stack, where Jesse Cohen is able to run away from his defender to continue the play to the break side for the game-winning goal. Notice how maintaining the shape of the stack ensures that space remains open throughout the progression of the offense, and in this case, Cohen saw an opening to attack the space from the back of the stack rather than the front.

Again we see the break side playing a key role in the Growlers’ red zone offense; teams that can effectively attack this space are always going to have an advantage over the defense. San Diego has had a top-eight offense each of the last two seasons, and their red zone efficiency should continue to be a big part of their success in 2022.