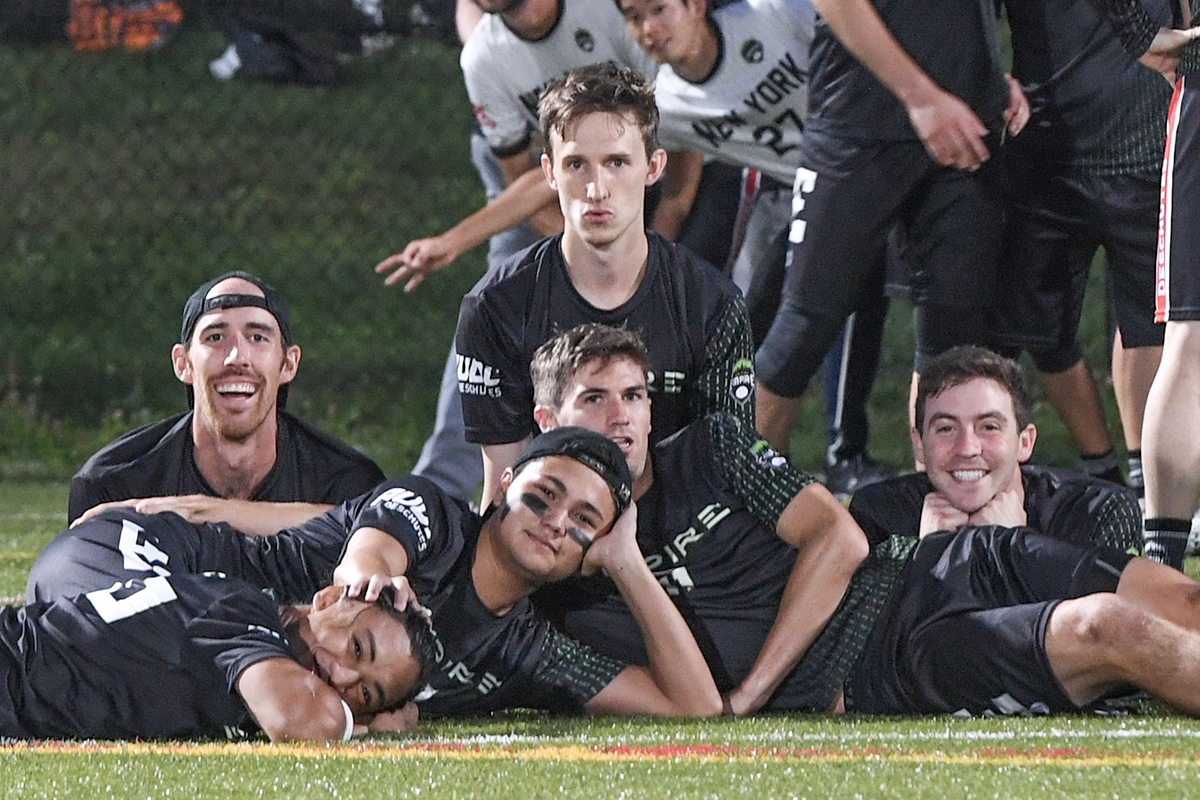 Jack Williams. Ryan Osgar. Ben Jagt. The three All-AUDL First Team talents made the New York Empire vertical stack offense one of the deadliest in the league in 2021.

Operating at all three levels of the field, the trio connected on countless goals throughout the year running through a pretty straightforward approach: Williams underneath to Osgar, Osgar deep to Jagt. The three positions match each skill set and playstyle, with Williams providing 100-percent throws from the backfield, Osgar’s cutting ability creating quick separation at the second level, and Jagt finishing drives with his elite deep cutting ability.

The vertical stack, which describes the downfield cutters lined up vertically in the middle of the field, gives each player sufficient room to work by dividing the field into two half-fields of space. The ability the trio has to initiate and continue the offense is well-understood by the other four guys on the field. In the ideal version of the offense, Williams starts with the disc in the middle of the field and Osgar initiates from the stack. While he often cuts from the front of the stack, it never seems to matter much what position Osgar starts in; he’s going to be that first cut more often than not and make his way to the disc. Generally towards the back of the stack, Ben Jagt is waiting. As soon as Osgar gets the disc from Williams, Jagt is setting up his deep cut to stretch the field, working off his defender to decide whether to cut on Osgar’s side or the opposite. The throw goes up from Osgar, and it’s Jagt coming down with the disc regardless of how much it floats or leads him.

The vision and trust these three regularly exhibit allows the Empire offense to flourish. In the below play, Osgar begins in the deep space as Jagt swings the disc back to Williams in the middle of the field. Jagt takes off downfield, which Williams thinks about for a moment, but instead opts for the sure throw to Osgar who has an incredible amount of space on the force side. Osgar knows Jagt has run past him and is in a one-on-one matchup deep, so why not just throw it up to the reigning MVP? Osgar’s propensity to shoot paired with one of the best deep cutters of all time is a big reason for the duo’s top two scoring finishes in 2021, and it’s the vertical stack that creates a lot of the space for them to run wild.

While the Williams-Osgar-Jagt combo is virtually unstoppable, even involving just two of the three stars often achieves the same result. Jack doesn’t always have to make the initial throw to Osgar, as he’s sometimes off in the far-side space or in the stack himself. And there are other times where it’s Williams or Osgar finishing the play rather than Jagt. The offense stays unpredictable because all three have the versatility needed to play interchangeable roles in the stack—all three completed 12 or more hucks in 2021, which ranked in the top five percent of all AUDL players.

In their Week 6 game against Philadelphia towards the end of the first quarter, the sequence begins with Williams slashing across the field horizontally in front of the stack for a quick 10-yard gain on the force side. Osgar begins in the back of the stack with Jagt more towards the front, but instead of setting up a cut to come underneath to presumably set up a Jagt deep cut, Osgar continues deep and receives the huck from Williams for the Empire score. By starting 20 yards downfield, Osgar’s position vertical stack sets up two options: he can set up his cut to attack the underneath space for a 10 to 15-yard in-cut, or if his defender is positioned closer to the disc, he can take his chances springing open for a deep look. Knowing it’s Jack Williams with the disc, he can simply take whichever option the defender is giving him, and in this case it’s a one-on-one matchup deep with no help over the top.

When your offense doesn’t even need to use Ben Jagt, that’s when you know you have an embarrassment of riches. The vertical stack maximized the efficacy of each of the three Empire stars last season, and by mixing up their specific approach, New York rode the trio to their second consecutive championship game appearance.