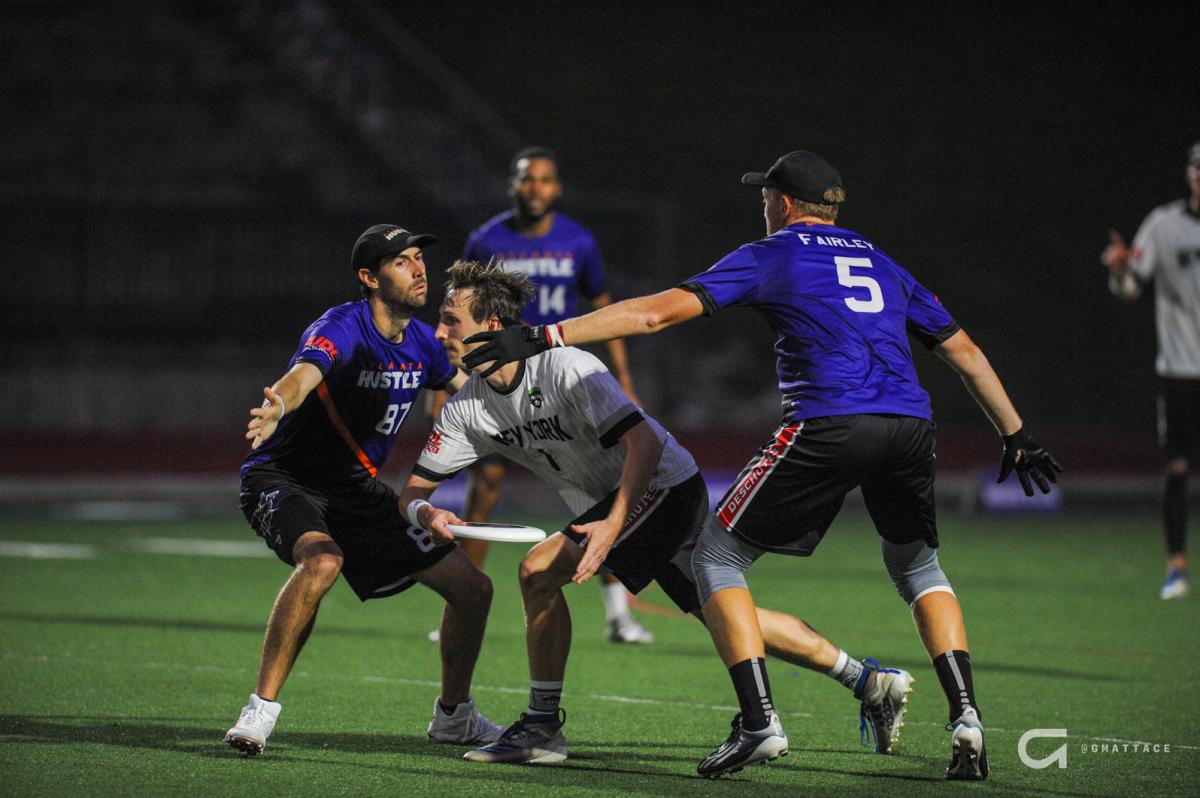 The Atlanta Hustle zone looked largely unbeatable in the first half of the 2021 season. With a defensive lineup featuring big, rangey defenders in Michael Fairley, Brett Hulsmeyer, Jakeem Polk, and Kelvin Williams, opposing offenses struggled to find holes and frequently stalled out after long possessions.

The traditional Hustle zone generally sets up in a 3-3-1 formation, with the three defenders closest to the disc in a sort of inverted triangle: a straight-up mark, and the two outside defenders taking away downfield throwing lanes. By positioning as such, the front of the zone looks to force the disc to a sideline, which is the goal of most zones; when the disc is on the sideline, throwers have fewer directions to throw the disc, so throwing lanes become more predictable and easier to stop. When the disc is swung, the two defenders closest to the receiver will follow the disc while the third off-side defender hangs back towards the middle of the field, looking to stop crossfield throws.

The role of the two non-marks is key, as they often have freedom to take away immediate handler resets or cutters popping into the backfield. A big part of the success of the front wall, and really all levels of the zone, is each defender being aware of the cutters moving in and out their designated zone, and tightening up coverage when a cutter is nearby. In the below sequence, Kelvin Williams sets up in the front-left position after the Hustle pull. Seeing the Boston cutter cut in front of him into the handler space, Williams recognizes the immediate reset and jumps the throw in the backfield for the block.

Later in the same game, Williams again anticipates a throw in the backfield, this time shifting from his downfield-stopping position to take away the continuation swing. It of course helps when you’re 6’3”, but it’s really Williams’ anticipation and awareness in the front wall that has made him a pure disrupter in the backfield. Here’s another example for good measure against Pittsburgh, this time tracking a floaty swing to the intermediate level of the zone.

The second level of the zone is fairly standard, with three defenders across the field horizontally, two wings and a middle. The middle acts almost as an extension of the first level of the zone, stepping in to take away the inside lanes that may open up from sideline-to-sideline disc movement. The two wings are typically looking to stop continuation throws or anything over the top of the zone (deeper sideline area), and depending on the formation of the offense, a wing may drop back to help in the deep space if multiple deep cutters are threatening.

In the earlier example at the end of the Week 1 Raleigh game, the far side wing Jakeem Polk finds himself essentially in the deep space at the end of the play, as Raleigh had two deep cutters in the space with just one deep Atlanta defender. Hulsmeyer ends up making the play from his safety position to seal the win; it’s often guys like Polk or Dean Ramsey that allow Hulsmeyer to be more aggressive coming up from the deep space, knowing he has help from a wing that has dropped back. He thrives in that two-deep set up, which was a big reason for his league-leading 23 blocks in 2021. 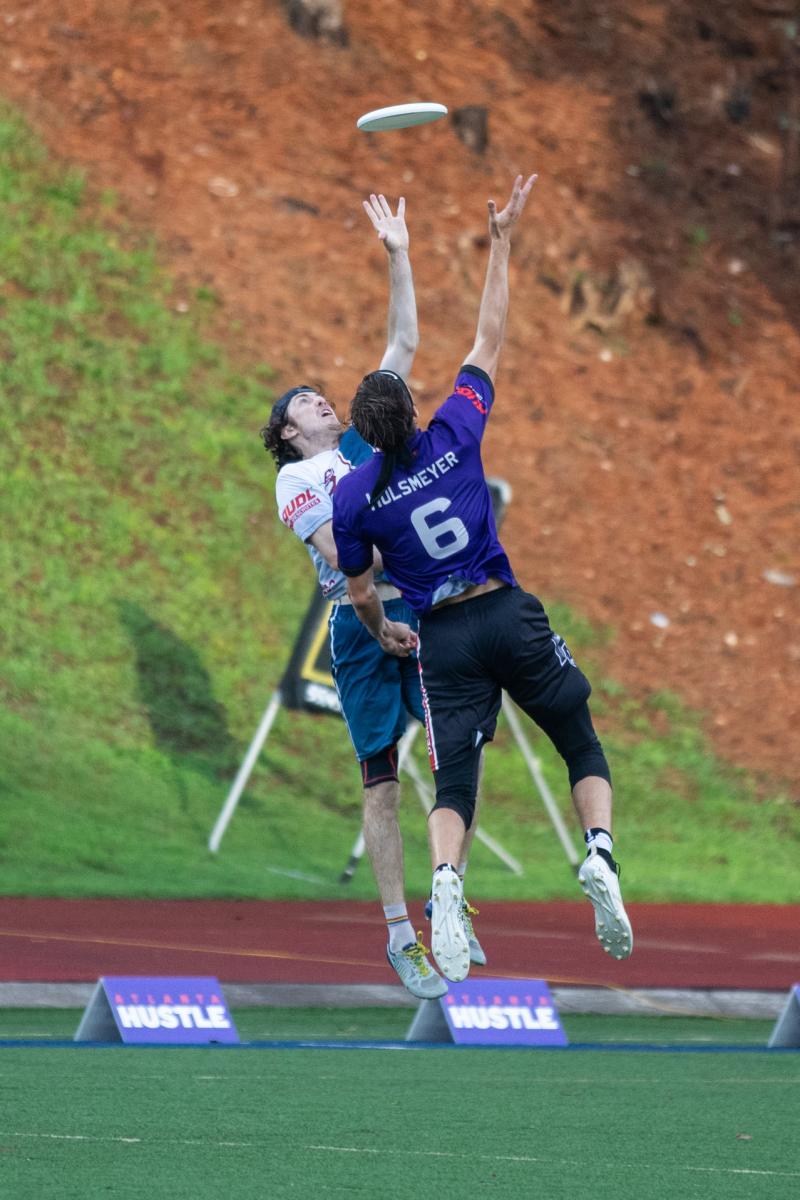 The deepest defender’s number one job is to keep everything in front of them; if they get beat on a huck, they did something wrong. Hulsmeyer was among the best defenders in the league last season, excelling at jumping underneath throwing lanes while remaining a force whenever he was tested deep. Not every defender can run with Ben Jagt and win a 50/50 huck.

The zone was at its finest in 2021 when it wasn’t overused; while this example may be their “signature” zone, the Hustle changed up their defensive looks throughout the game, mixing in different zones along with match-up based defense. Keeping offenses on their toes and presenting new challenges, particularly late in games, allowed this Hustle defense to close out several wins throughout the season.