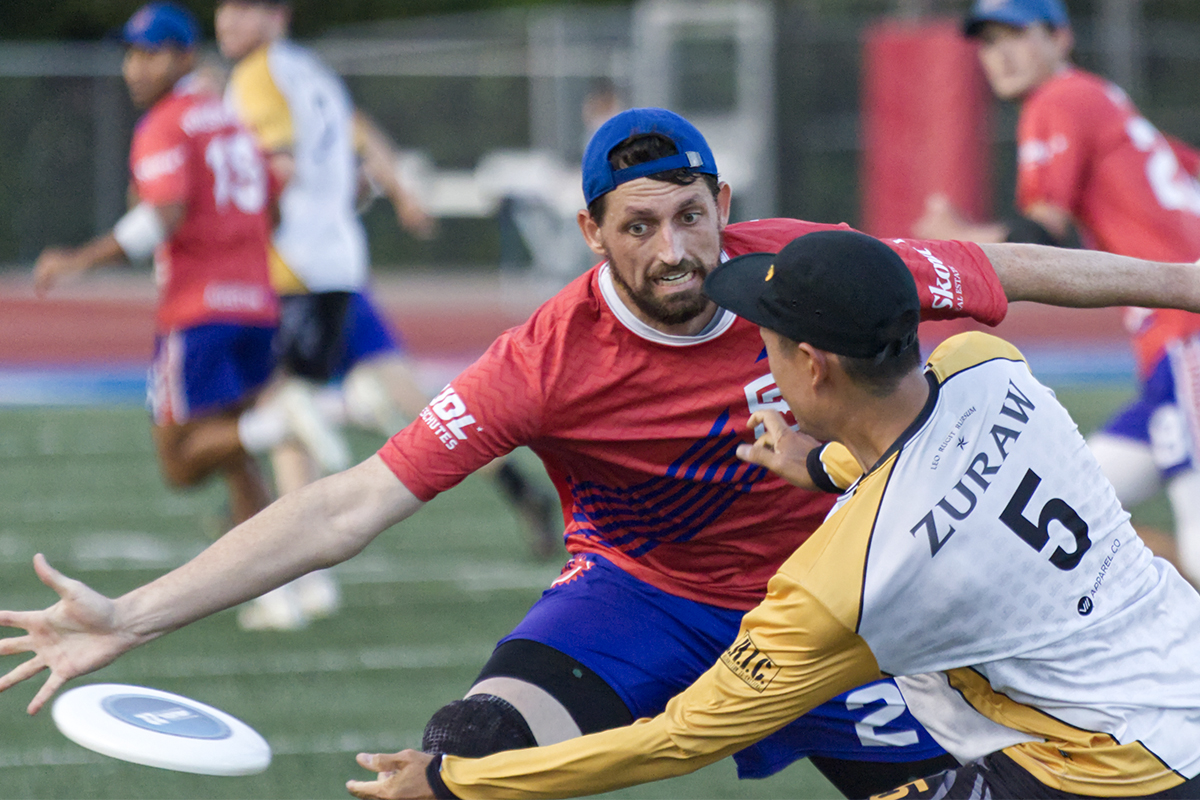 With 15 goals in his last two games, Greg Martin continues to give defenses nightmares as Philly’s number one downfield target. Martin may be the most skilled player in the air in the entire league, which also makes him one of the most fun to watch; Martin came down with nine hucks (throws of 40-plus yards) in his record-setting 658-receiving-yard performance against Ottawa in Week 4. The entire lineup of Phoenix throwers, led by Jordan Rhyne and James Pollard, fully trust him to come down with every 50/50 ball, and another big game feels inevitable this week with Philly hosting Toronto. The Rush are allowing 72 percent of opposing hucks to be completed, the third highest percentage in the league, and they’ve already been a part of two shootouts against Ottawa and DC. A third seems semi-likely, in which case the Phoenix would be wise to continue feeding Greg Martin.

Mick Walter returns from injury this week for Austin’s defining road trip of the season. Walter ended the 2021 season with the best defensive game of the year, racking up seven blocks against Dallas, as he did all he could to try and will Austin into the playoffs. Standing at 6’6”, Walter is an imposing presence in the deep space with the range to cover underneath cuts, in addition to providing help over the top. He went without a block in his first and only game of the season a month ago, but the Sol came away with their biggest win of the season, taking down Dallas 24-17. His return to the lineup comes at a critical time in a season-defining road trip for the Sol, as they get set to face the undefeated Chicago Union Friday night followed by the 4-2 Madison Radicals on Saturday. Finally joining forces with 6’7” Ethan Pollack—Pollack was inactive for Walter’s lone appearance earlier this year—the Sol’s twin towers will look to stymie the opposing deep attack throughout their double header weekend.

Nate Goff is back in the Chicago Union lineup after being inactive for last week’s game against Madison. His presence was missed particularly on the counterattack, as Chicago was only able to convert 3-of-13 break opportunities, with two of the three coming after O-line substitutions. The 6’4” Goff brings versatile offensive firepower to the D-line offense, capable of playing D-line quarterback with his physically wide range of release points or attacking downfield and skying over helpless defenders. Defensively he’s off to the best start of his career, already having recorded 10 blocks in his first three games, tied for third most in the league. Up against the fifth-most efficient offense in the league, Goff and the Union D-line will have their work cut out for them this week against a dynamic Sol offense coming off their best game of the season.

Bigs seem to be the theme this week, as Henry Fisher gets set to take on the 6’5”-plus combo of Brett Hulsmeyer and Dean Ramsey. Hulsmeyer was inactive for their first meeting of the season, but the Carolina Flyers still had their lowest huck completion rate of the season against Atlanta in Week 1, with Fisher managing just 134 receiving yards, his lowest total of the past two seasons. Since then, he’s gone over 300 total yards in three of his last four games and has yet to throw an incompletion this year while already exceeding his regular season throwing yards total from a year ago in half the games. When he’s forced underneath, Fisher’s been developing the throws to consistently put the disc out to space, which could easily come into play this week against a Hustle defense forcing the fourth-most huck turnovers per game. Still, the Flyers are at their best when they’re connecting deep, and it’ll be worth watching whether Fisher can get the better of Atlanta’s two bigs in their second meeting of the season.

Callahan finalist Hayden Austin-Knab will make his 2022 Atlanta Hustle debut this week against the Carolina Flyers. One of the best college players in the country over the last couple years, the University of Georgia product was named Ultiworld’s 2021 D-1 Men’s Player of the Year back in January after leading his team to a finals appearance. Austin-Knab started on offense for the Hustle last season, playing three games and totaling over 600 yards with 11 scores. He brings a prototypical hybrid skillset, often starting downfield but more than capable of facilitating drives, or ripping continuation hucks over the top of defenses. The Hustle have a sudden influx of talent with Austin-Knab joined by former Thunderbirds star Max Thorne also making his 2022 Hustle debut this week, so it’ll be worth watching how Atlanta’s rotations shake out in their strongest roster to date. Regardless of where he slots in, Austin-Knab is a strong all-around player sure to make his presence felt this week.

Madison’s second-leading receiver through the first half of the season, Sterling Knoche has gone from D-line stalwart to primary downfield option in his fifth AUDL season. He now has scored multiple goals in all four games he’s played this season, with 200-plus receiving yards in three of four. Knoche has the speed and athleticism to take the top off defenses, not needing many touches to make his presence felt; he’s averaging fewer than 15 touches per game but over 16 yards per touch. The Sol defense has struggled to contain opposing deep attacks this season, allowing an average of 10.8 completed hucks per game, second most in the league. Whether the Radicals can exploit the Sol’s huck defense could play a big role in establishing an offensive rhythm, and Knoche’s ability to stretch the field may be the focal point in the Week 8 Game of the Week.

Arguably the best all-around player on the team, KJ Koo returns to the Los Angeles Aviators lineup for a pivotal Week 8 matchup against the San Diego Growlers. Koo hasn’t played since Week 1, when he tallied three assists, four goals, and two blocks against Salt Lake, compiling over 400 total yards of offense. The 21-year-old hybrid is a pure field general who can operate as the primary initiator for the Aviators offense, whether he’s starting downfield or taking over possessions as a handler. A handful of guys—Sam Cook, Matt Miller, and Everest Shapiro, to name a few—have stepped up in Koo’s absence; these added reps have been invaluable in further developing LA’s young stars and raising the offense’s ceiling. With the Aviators sitting at 3-3, Koo’s return comes at the perfect time as LA looks to keep their momentum going and stay in the playoff conversation out West.