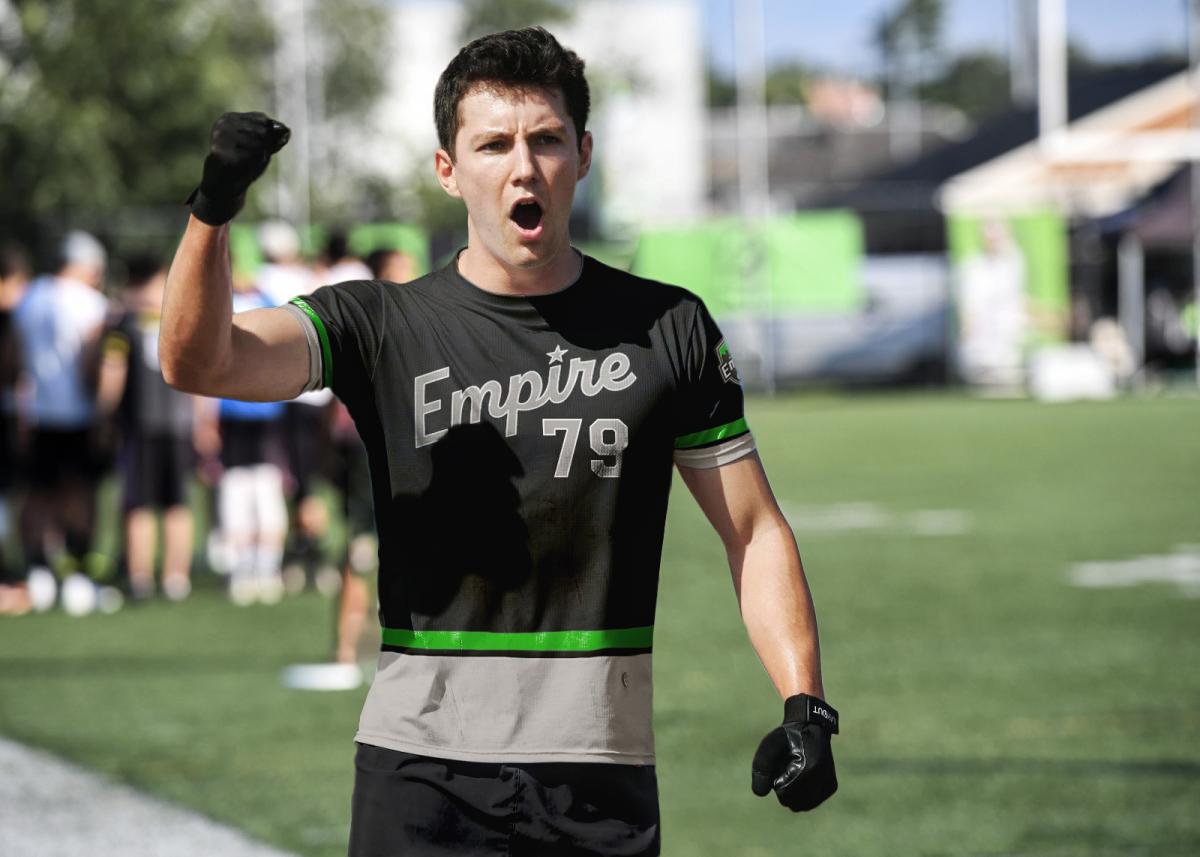 The Boston Glory defense has a tall task ahead of them this weekend in a season-defining double header road trip to DC and Philly, and Cam Wariner is the guy that sets the tone for the entire D-line. The Phoenix had their way with the Glory defense in Week 1, converting a season-best 64 percent of their offensive possessions. In their one meeting against DC last season, Glory allowed the Breeze to convert a season-best 80 percent of their offensive possessions. Wariner was inactive for both games. When you look at his seven career games, which includes three games against New York, Boston allowed the opposing offense to convert 55.7 percent of their possessions. Wariner has 12 blocks in those games (1.7 per game) and noticeably frustrates his matchups downfield with relentless pursuit, showcasing his athleticism with elite closing speed and regularly besting downfield cutters in the air. Boston likely needs at least one win this weekend to stay competitive for that third playoff spot in the East; Wariner and the defense have to show up.

“Ders went out, so I had to take over the front cone for us.”

After playing 98 percent of his points on defense last year, Alex Davis made the switch to O-line this year and has been a natural fit in the Carolina Flyers system. Anders Juengst has been inactive the last two games and Davis has stepped up in his absence, with six assists, 10 goals, and 927 yards of offense on a perfect 35-of-35 completions in that span. He’s been owning that front cone this season, averaging 4.3 goals per game for the year, and his speed has brought yet another field-stretching presence to a Flyers offense that likes to take their fair share of shots. Juengst is not rostered for the team’s double header road trip this weekend, which means Davis should stay busy as an active middle cutter that can work at all levels of the field.

Dallas Legion captain Kevin Richardson has been one of few bright spots on the Dallas offense. Through three games he leads the team with 12 scores and 988 total yards, including 718 receiving yards, more than double the amount of the next closest player. K-Rich’s size and athleticism has created matchup problems for opposing defenses throughout his career, as his ability to get downfield and win battles in the air has most of his defenders backing him, which has yielded plenty of open chunk gains underneath. The Legion have a tough draw this week against the defending champion Flyers, a team that Dallas defeated in the South Division Championship Game three consecutive seasons from 2017 to 2019. In his last four games against the Flyers, Richardson has 15 goals while completing 77-of-79 throws (97.5 percent). If the Legion offense is going to hang with one of the best in the league, Richardson will have to continue to do a lot of the heavy lifting as Dallas’ top receiver.

Making his 2022 debut this week following the conclusion of the college season, Jacques Nissen is back for his third season with the DC Breeze. After playing the role of steady handler in the Breeze backfield as an 18-year-old rookie in 2019, Nissen evolved into a dynamic hybrid last season, taking on an increased downfield role in addition to being a pseudo ‘fifth handler’ on the line. He led the team with 2,059 receiving yards, and he was the only Breeze player to record 1,500-plus yards both throwing and receiving. Now, the Breeze offense has gone from handler-heavy to hybrid-heavy, as eight of the team’s 11 primary O-line guys are averaging over 100 throwing yards and over 100 receiving yards per game. Nissen should make for a seamless fit into the second most efficient offense in the league.

Starting to feel a little bad for the rest of the league. The best college player in the country will make his New York Empire debut this week against the Toronto Rush, as John Randolph brings even more starpower to this ever-growing juggernaut of a team. The 2022 Callahan Award winner has two years of AUDL experience playing with Seattle in 2017 and 2018 as a teenager, and he compiled over 50 scores, 12 blocks and nearly 400 completions in that span. Randolph is a workhorse who wears opponents down like few others, whether he’s demoralizing guys in the deep space, or grinding out small-space red zone cuts to punch in scores. He’ll likely slot in on the Empire D-line, where he should find plenty of success leading the counterattack after dictating his matchups with strong defensive positioning. The Empire converted a season-high 16 breaks against Toronto when they played two weeks ago; this should be a nice ease-in game for Randolph as he finds his fit on a new team.

On a loaded Austin Sol O-line stacked with talented cutters, Evan Swiatek has risen above his counterparts as the A1 option downfield. Swiatek thrives as an initiating cutter; he’s just as comfortable grinding out underneath cuts to facilitate motion as he is taking off deep to receive hucks from Jake Radack or Paul Starkel. He can play at all levels of the offense and has looked steadier with the disc in his hands this season compared to last; he’s completing 95.5 percent of his throws this year, up five points from last year. Swiatek also leads the team in offensive efficiency—the offense converts a possession 59.2 percent of the time when Swiatek is on the field—as he’s played a big role in the ascent of the Sol offense to top-10 status. Two weeks ago in Austin’s first meeting with Carolina, the Flyers had no answers for Swiatek as he finished with his highest yardage output of the season (501) with two assists and five goals. Look for him to continue playing a featured role in the offense as Austin looks to hand Carolina their first loss.

Another post-college season debut, Danny Landesman suits up for his new team this week as the Colorado Summit host the Oakland Spiders for the first time ever. Landesman had two extremely productive seasons with the Aviators in 2019 and 2021, totaling over 80 scores in 17 games played, including scoring over 25 goals both seasons. He now joins an undefeated Colorado squad that has a great mix of veterans and young talent, with plenty of firepower on the offensive side. Landesman should slot in on that O-line cutting core alongside Jay Froude, Alex Atkins, and Quinn Finer, giving Jonathan Nethercutt and co more than enough downfield targets to create matchup problems all over the field. Up against a bottom-10 Spiders defense, Landesman should find plenty of room to run as he carves out a role in the new offense.