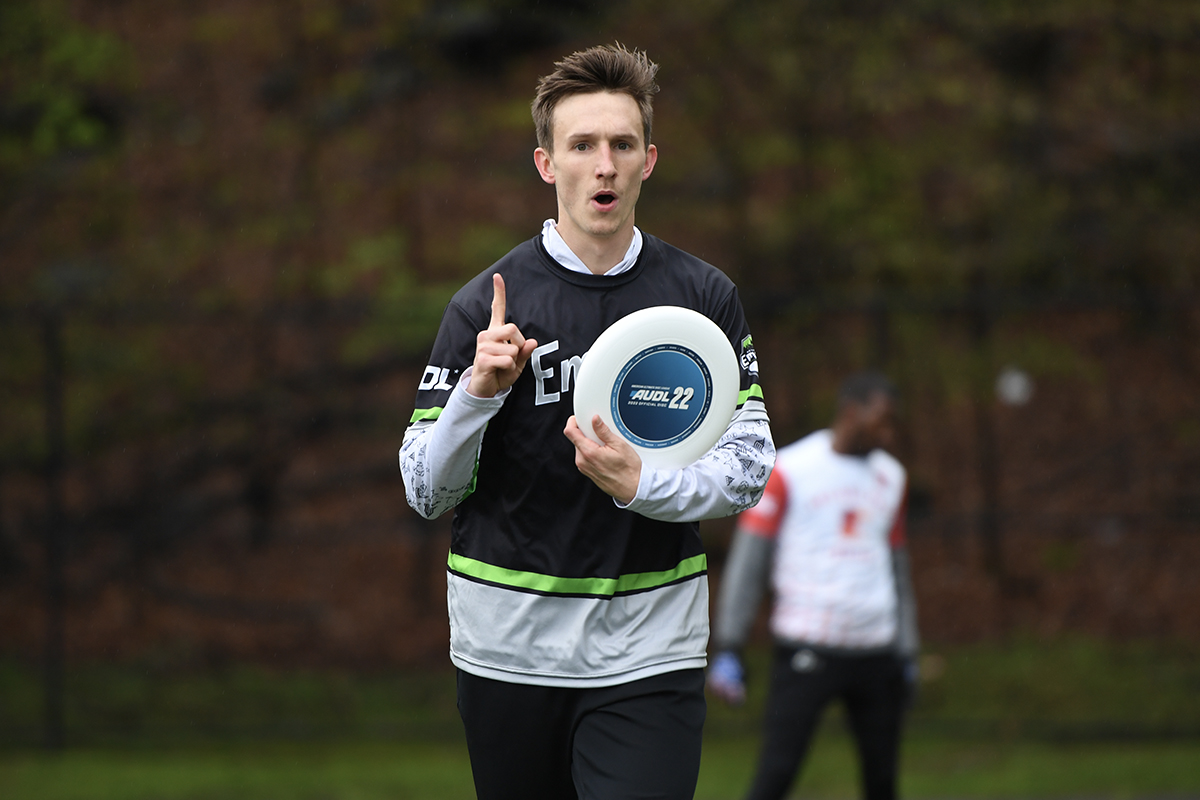 Through the first two weeks of the season, Jakob Brissette is the only player in the league that has recorded 450-plus throwing yards in multiple games. He’s reached the milestone in each of his first two games to start the year, as he’s continued to be the central distributor for the Montreal Royal offense coming off a breakout 2021 season, in which he led the team in assists, completions, and throwing yards. With no Vincent Lemieux balancing out the deep attack from the backfield, the Royal have leaned on Brissette and he’s delivered with back-to-back standout performances, accounting for over 25 percent of Montreal’s total throwing yards thus far. He’s fearless targeting the deep space and picks his spots well to exploit favorable matchups; he’s already completed eight hucks (throws of 40-plus yards) this season, tied for the most in the league. Still just 21 years old, Brissette is one of the highest-ceiling handlers in the league and will continue to stay busy this week in a double header road trip against Philadelphia and DC.

After exploding for 16 assists and four goals in Salt Lake’s opening weekend as a franchise, Jordan Kerr has immediately established himself as a must-watch player in the Shred offense. In his first two games as the team’s primary initiator, Kerr played his role to perfection by gashing defenses with his legs before demoralizing them with a full arsenal of throws, featuring a signature step-out lefty flick that San Diego in particular had no answer for. Kerr is the team’s primary attacker; he has an eye for the end zone like no other on the team and has the throws to put his fellow cutters in constant position to make plays downfield. It’s very much a Ryan Osgar-esque role, and I wouldn’t be surprised to see Kerr rival Osgar’s 2021 assist totals (he finished with 77) this year in the Salt Lake system. With guys like 18-year-old U20 Team Selection Will Selfridge and leading AUDL goal scorer Joe Merrill, there’s talent everywhere you look in the Salt Lake offense, and Kerr is just the guy they need to maximize it.

Declan Miller turned 18 years old a week before the start of the season. In his debut—about as young of a debut as anyone can have in the AUDL—Miller became the first player ever to record 400-plus throwing yards and 400-plus receiving yards in the same game. There’s this fluidity to his game resembling that of a five-year vet, whether he’s on the receiving end of long gainers or facilitating the offense from the backfield. And through two weeks, it seems as though the Cascades have made it a point to center the offense around their 18-year-old rookie. He followed up his record-setting debut with a 577-yard performance this past weekend against Colorado, and he’s tied for the team lead with 11 scores on the year. Miller has already shown the ability to do everything for this Cascades offense; how he continues to mature into an offensive leader will be worth watching throughout the season.

So far through his first two games, Ryan Osgar has identical scoring stats as he had at the same point: 10 assists and four goals. He’s on pace for another All-AUDL season, and he’s been taking care of the disc more with just three throwaways in his first two games compared to five in 2021. With throws still as explosive as ever—he’s yet to throw an incomplete huck on four attempts—Osgar has been integral in punching in scores for the New York Empire offense, maintaining a constant aggressiveness to attack the end zone from anywhere on the field. Boston has allowed 20-plus goals in 11-of-15 games dating back to the start of last season, making for an extremely favorable matchup for one of the top scorers in the league. In two games against Boston last year, Osgar carved up the defense to the tune of 15 assists and four goals, while going over 700 total yards in each contest.

To say Boston missed Orion Cable last weekend in Canada is a hefty understatement. The 6’5” matchup nightmare returns to the lineup this week after shredding the Phoenix defense for 529 yards of offense to go with four assists and four goals in Week 1. Boston discovered they can just throw the disc up to Cable wherever he is on the field with guaranteed success, though 100/0 discs may be closer to 50/50 this week against an Empire defense featuring sky lords Jeff Babbitt, Marques Brownlee, and Antoine Davis. Regardless of who marks up on him, the Cable matchup will be worth watching every time he’s out there, especially if Boston sticks to their guns and builds on their league-leading huck numbers. Tannor Johnson is out this week, so Cable may be busier than normal as the lone big on the O-line; he’ll likely need a huge game for Boston to have any chance of stealing the win.

After missing Week 1 with an injury, Jonny Malks will make his 2022 debut this week against Montreal. Against New York, the Breeze offense took a pretty distributive approach to their backfield, with constant cycling in and out of the handler set to maintain spacing and offensive flow; five players finished with 30-plus completions, 100-plus throwing yards, and 100-plus receiving yards. Malks led the team with 49.2 completions and over 300 throwing yards per game last season as DC’s primary handler, so it’ll be worth watching whether the offense molds back around Malks or if he’ll be another rotating piece in a more balanced offense. If his wrist is fully healed, he’ll have a chance to re-establish the vertical dimension in the Breeze attack against a Royal defense prone to big plays; Malks averaged 2.6 huck attempts per game last season, while DC attempted just five as a team in their first game.

After a season in Chicago, Keegan North went nuclear in his return to Indy, slashing through the Detroit defense in every way possible as he racked up nine assists, five goals, and over 900 total yards of offense. The game served as a reminder how perfectly North fits in the AlleyCats offense, especially in the indoor environment when his playstyle turns to ‘backyard ultimate’ and he can repeatedly launch hucks to a talented core of AlleyCats cutters; North was 7-for-7 on throws of 40-plus throws against Detroit. There was never going to be a one-to-one replacement for the injured Travis Carpenter, but North’s athleticism and throwing ability gives the offense a lot of the same explosiveness that his teammate provided. He nearly halved his 2021 regular season scoring total in just one game, and with another home game this week, North will look to keep the Indy offense humming in a much tougher draw against the Madison Radicals.