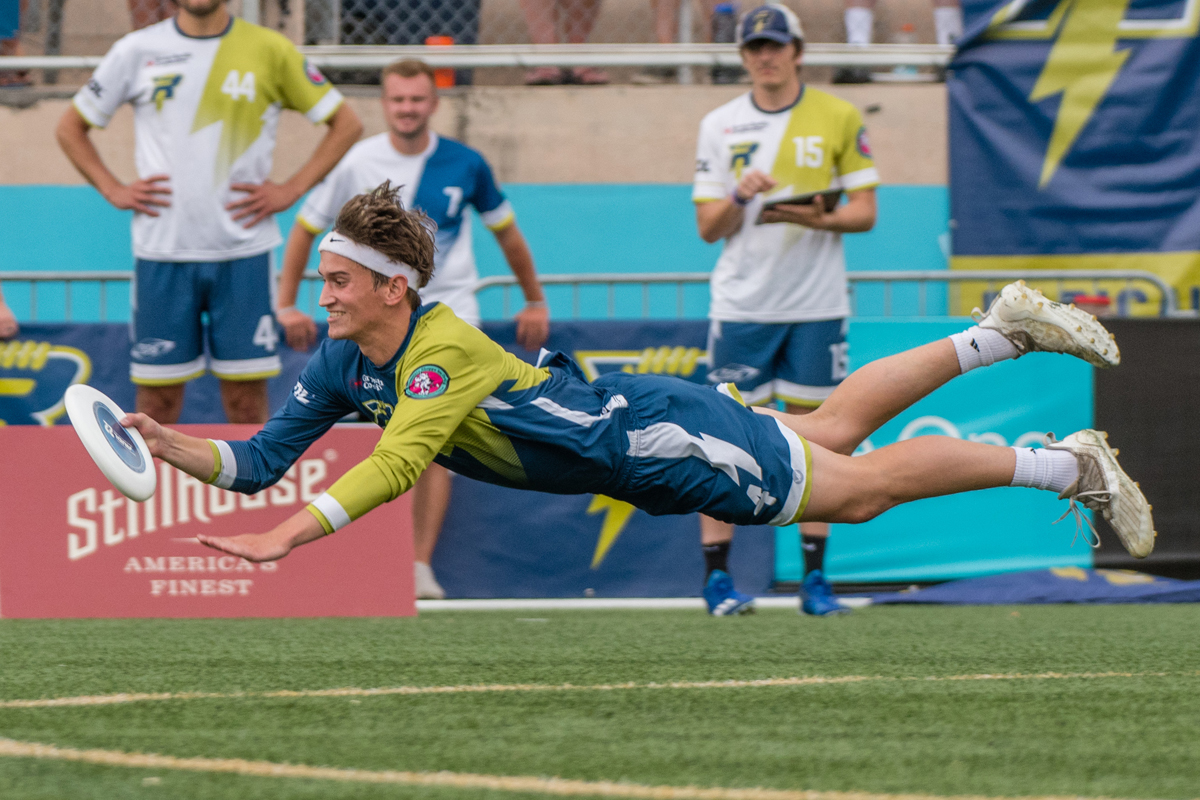 In a must-win game tomorrow night, the Madison Radicals will need a big game from second-year handler Henry Goldenberg to get the offense back on track. The team will be without top handler and yardage-getter Victor Luo, leaving the backfield in the hands of Goldenberg and ninth-year vet Josh Wilson. Like Luo, Goldenberg is very much a motion handler who will pick his spots to rotate out of the backfield to get chunk gains underneath; he’s recorded 100-plus throwing yards and 100-plus receiving yards in four of his six games this year. While he’s shown flashes in his ability to lead the offense—he had a five assist, two goal outing in the Madison’s home win over Minnesota—Goldenberg has also struggled a bit with consistency, as he’s had four or more turnovers in half his games, and one or zero turnovers in the other half. He was a perfect 21-for-21 on throws against Chicago in their first meeting of the season, and he may need another turnover-free performance if the Radicals are going to push for the third playoff spot.

The 2022 World Games gold medal winner is back in the Chicago Union lineup tomorrow night after a three-game hiatus. Nate Goff currently sits tied for third in the league in blocks with 16, despite appearing in just six games; he leads the league in blocks per game with 2.7. In addition to generating turnovers, Chicago’s defensive captain will likely need to take charge offensively against Madison, as the team will be without a trio of D-line quarterbacks in Tim Schoch, Dalton Smith, and Joe White this week. Goff has produced over 100 total yards in every game he’s played this season, averaging 140 per game, and he has the ability to facilitate the D-line offense from the backfield with big break throws and long, stridey handler cuts. This will be his first game against the Radicals this season after recording a block in two of three meetings last year, and he’ll be on franchise record watch; with two blocks, Goff would tie the regular season blocks per game record set by Drew Swanson in 2021 (2.6).

The Austin Sol D-line should have plenty of opportunities this week playing against the league’s worst offense, and more often than not, the counterattack will be led by Matthew Armour. Among Sol players that have played at least 85 percent of their points on defense, Armour leads the team with 25 scores, 138 completions, and 1,573 total yards. He has the Sol D-line converting at the fifth most efficient rate in the league (52.5 percent), up nearly five percentage points from last year’s 47.8 percent mark. The Sol haven’t played Tampa Bay yet this season, but against their bottom-of-the-division counterparts in Dallas, Armour has averaged over 170 yards of offense and three scores per game in five meetings. Capable of setting the tone with sticky handler defense in addition to initiating the offense after turnovers, Armour will look to lead the Sol defense in a must-win game to lock up the second playoff seed.

He’s played just two games this season, but Ben “Dusty” Green has been about as impactful as a defender can be in limited action thus far. In his Salt Lake Shred debut at the beginning of June, Green recorded six blocks and three scores against Oakland, then had a second multi-block game against Colorado the following week. Tomorrow, Green re-joins a Salt Lake D-line that has hit their stride generating turnovers in recent weeks; the team is averaging 14.4 blocks per game over their last five compared to 10.0 through their first six games. In addition to his playmaking, Green should also add some stability to the counterattack, which has struggled at times in recent weeks to convert breaks. Dusty averaged just under 150 yards of offense in his two appearances with four total scores, as the team converted 61.5 percent of D-line possessions when he was active. Up against Portland this week, the D-line will look to break the game open early in their signature ‘Shred home game’ style, as they look for some positive momentum heading into the playoffs.

Active for the first time since June 11, Eli Friedman has been a critical component of the Portland Nitro offense every game he’s played. He’s been a great balancing piece alongside Leandro Marx, able to initiate disc movement from the backfield to create offensive flow for a unit that can at times get too reliant on big plays. That’s not to say Friedman won’t launch the disc when the opportunity is there—he’s completed 11 hucks in six games thus far—but he’s shown some of the better poise on the team at picking those spots only when they make sense. Portland has yet to get blown out when Friedman is in the lineup, with their biggest loss coming by two goals, and their O-line conversion rate is 59.3 percent (would rank seventh in the league) in games that he’s played. While they were eliminated from the postseason weeks ago, the Nitro could still impact Championship Weekend seeding by putting up a fight in Salt Lake and Colorado this week.

Evan Lepler noted in this week’s Tuesday Toss the importance of season-long point differential for Championship Weekend seeding, meaning the Colorado Summit will want to run up the score on Portland as much as possible this week. And who better to help extend this point differential than Colorado’s D-line scoring leader, Cody Spicer. Among players that have played at least 75 percent of their points on D-line, Spicer has the third most scores (32) in the league. He’s shown incredible burst off of turnovers, and he’s been able to facilitate counterattack drives with ease. But for all his offensive success, really it’s his defensive game that has been the most impressive; Spicer has consistently locked up top matchups this season while generating blocks in a variety of ways, from shutting down handler cuts to rising above cutters in the deep space. Hoping to see him on Leandro Marx this week before running wild after turnovers.

If Madison beats Chicago tomorrow night, all eyes will be on the Indianapolis AlleyCats D-line as they attempt to keep up their record-setting conversion rate in their regular season finale against Atlanta. The problem is, they’ll be missing their primary D-line quarterbacks in Brett Matzuka and Xavier Payne this weekend, which will put added pressure on guys like Jacob Fella to make their presence felt after turnovers. While he continues to operate around his one block per game career average, Fella’s offensive game has taken a step forward this year, as he’s been more involved on the counterattack than ever before. He’s been a facilitating cutter on the bulk of Indy’s D-line drives this season, which has included punctuating a handful of possessions with 17 scores on the year. He’s also thrown the disc away just twice on 60 attempts. There’s been just one game this season where Indy hasn’t had one of Matzuka or Payne quarterbacking the D-line, and it was their 28-13 blowout loss to Minnesota when they converted just 1-of-7 breaks. How Fella and the D-line can adapt to those absences could be the determining factor in their ability to keep this game close.