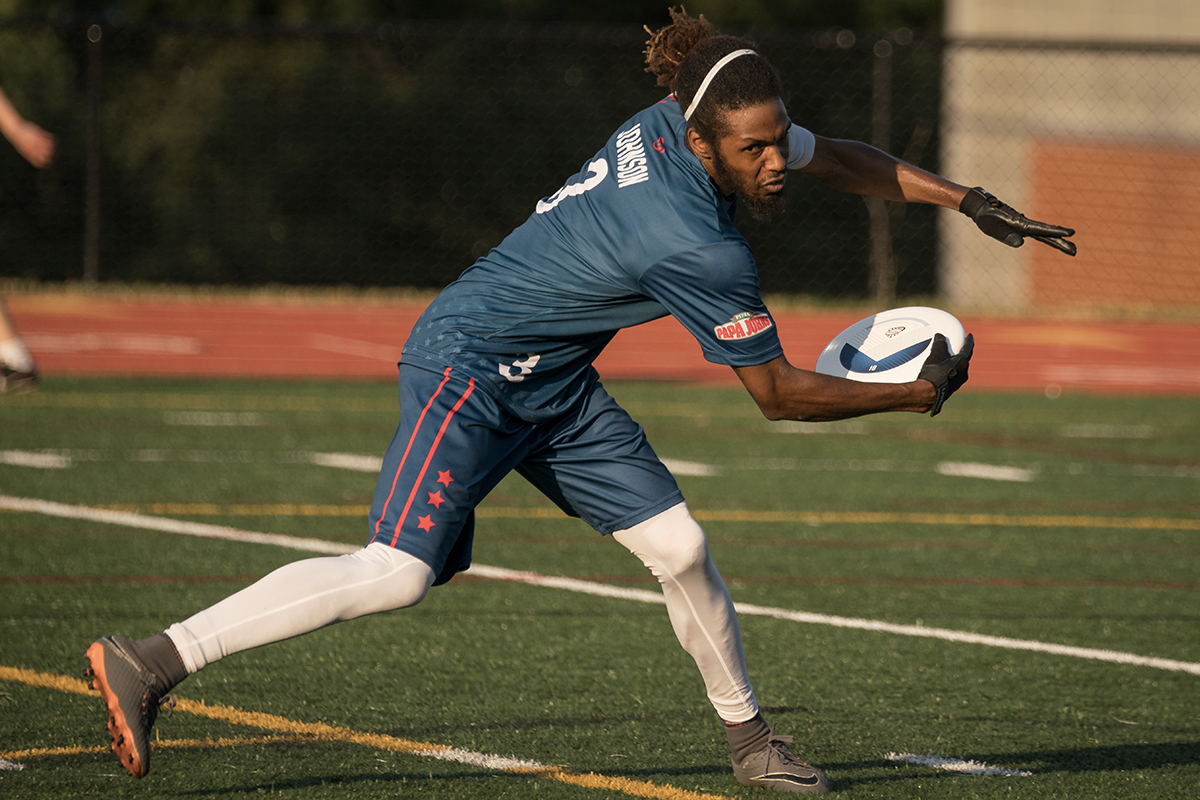 After spending the 2021 season with San Diego, Khalif El-Salaam heads to the opposite side of the country to play with another championship contender, the Atlanta Hustle, for the 2022 season. Selected to the 2022 US World Games team, El-Salaam brings elite-level talent to a team that’s been on the rise and will look to unseat the Carolina Flyers at the top of the South Division. While they lost a 2019 All-Star in Antoine Davis this offseason, the Hustle gained another one in Khalif, a player that’s averaged over 4.5 scores and a block per game for his career. He’s likely to slot in on defense where he’s spent over two thirds of his playing time through his 31 career games, but don’t be surprised if he crosses over to offense—especially in crunch time in a close game—to give the Hustle a versatile cutter that can stretch the field with or without the disc. Reunited with his former coach, expect the Hustle to optimize El-Salaam’s usage throughout the season as they push for the top spot in the South.

Eric Taylor had a roller coaster season in 2021. He went from safe, completion-heavy center handler in 2019 to attacking midfield hybrid at the start of 2021—he had 20 scores through the first four games after totaling just 25 throughout the 2019 regular season—before an injury sidelined him for the middle chunk of the summer. When he came back, he morphed into the ideal plug-and-play chess piece, splitting his time between offense and defense, showcasing elite pulling ability and consistent playmaking on both sides of the disc. It’s hard to go wrong wherever the Flyers decide to deploy their best player, but the decision could have big implications in a tone-setting opening weekend matchup against Atlanta. On one hand, losing Allan Laviolette to injury leaves a gaping hole in the offense, a hole that Taylor can likely fill better than anyone on the team. On the other hand, Taylor played 64 percent of his points on D-line in the Flyers’ playoff run, which notably resulted in an AUDL title. The world wants a Taylor-El-Salaam matchup, so wherever those two play let’s hope it’s on opposite sides.

The longtime Aviator makes his San Diego Growlers debut tomorrow night after signing with the two-time reigning West Division champions this offseason. Scoring has come easy for Sean McDougall over the past three seasons, as he’s racked up 237 combined scores (5.8 per game) in that span. LA’s franchise leader in goals and blocks, McDougall has developed an incredibly well-rounded game throughout his career, with his speed on full display as both a deep cutter and as a defender; McDougall recorded 18 blocks and over 2,800 receiving yards last season—two-time MVP Ben Jagt was the only other player to reach those totals. Early reports are that McDougall will slot in to the goal-scoring Sean Ham/Lior Givol downfield cutting role, so don’t expect his career scoring numbers to slow down at all. He’ll also be making his debut alongside former Aviator Chris Mazur; the last season these two played together in 2018, Mazur threw 53 assists, McDougall had 61 goals, and their team made it to Championship Weekend.

Rico is back. Having last played for the DC Breeze in 2018, Delrico Johnson rejoins the team for 2022 as one of several headlining additions this offseason. In his last season with DC, Johnson was making plays virtually every time he was on the field, regardless of whether he was playing offense or defense; he finished the year totaling 24 assists, 41 goals, and 21 blocks playing a 44/56 split of O-points and D-points. Johnson is a natural defender who brings a dynamic hybrid skillset to any offense, equally capable of being a prototypical downfield playmaker as he is facilitating continuation cuts with his throws. Exactly how he fits into this revamped DC roster remains to be seen—I’d guess he starts on defense though could easily roam between lines throughout the game—but I can guarantee wherever he plays, New York is going to feel his impact this weekend in the AUDL Game of the Week.

Antoine Davis made league news this offseason in his “The Decision”-style announcement on Instagram live, announcing he was taking his talents to New York after his lone season with the Atlanta Hustle. He’s the latest in a consistent flow of big-name free agent signings heading to New York over the last several seasons: Jack Williams in 2019, Ryan Osgar in 2021, now Davis in 2022. Davis was Atlanta’s A1 offensive cutter last season and his numbers accurately reflected the size of his role; he played the most points on the team and ranked top three in assists (26), goals (33), receiving yards (2,922), and total yards (4,206) while ranking fourth in blocks (9). While he’s an undeniable asset to any O-line, the Empire are one of the few teams in the league where his defensive impact could prove even more valuable. Davis made his preseason debut on the Empire D-line at TEP a couple weeks ago, playing alongside Jeff Babbitt, Ben Katz, and Marques Brownlee. Adding yet another playmaker with range to cover the entire field could have compounding effects for the entire D-line, as they’ll look to limit a top-five offense in DC.

Kyle Henke is back in Austin, and there’s not much more we could ask for than a good old fashioned revenge game to open the season. After a lone season with Dallas, the 2019 All-Star is back where he belongs on an up-and-coming Sol squad looking to solidify themselves as the top team in Texas. Henke had 40 scores and led Dallas in receiving yards in 2021, serving as a versatile downfield target capable of facilitating possessions throughout every level of the field, despite playing with a cast on his left wrist for the second half of the season. Henke brings even more firepower to a Sol O-line that saw breakout seasons from Eric Brodbeck, Evan Swiatek, and Vinay Valsaraj among others in 2021, and they’ve also added back 6’7” Ethan Pollack, who rejoins the team after a one-year hiatus. The Sol have a cutting core that can compete with the top teams in the division, and if Henke is able to bring more consistency to the Sol offense, this group has an incredibly high ceiling.

Speaking from experience, you will become a fan of Leandro Marx when you watch him play. The guy did basically everything offensively for the Portland Nitro in their preseason showcase game against the Oakland Spiders last month. He facilitated offensive flow with in-rhythm cuts and pinpoint continuation hucks, and he was a menace skying over helpless defenders in the end zone. Of Portland’s 24 points, Marx scored or assisted on 14 of them with six goals and eight assists on the night. This Portland team is going to be star-driven, as Marx will likely share the spotlight with teammates Raphy Hayes and Jack Hatchett, who were both selected as alternates for the 2022 US World Games team. All three are names to watch heading into Portland’s inaugural game against Seattle this Sunday.