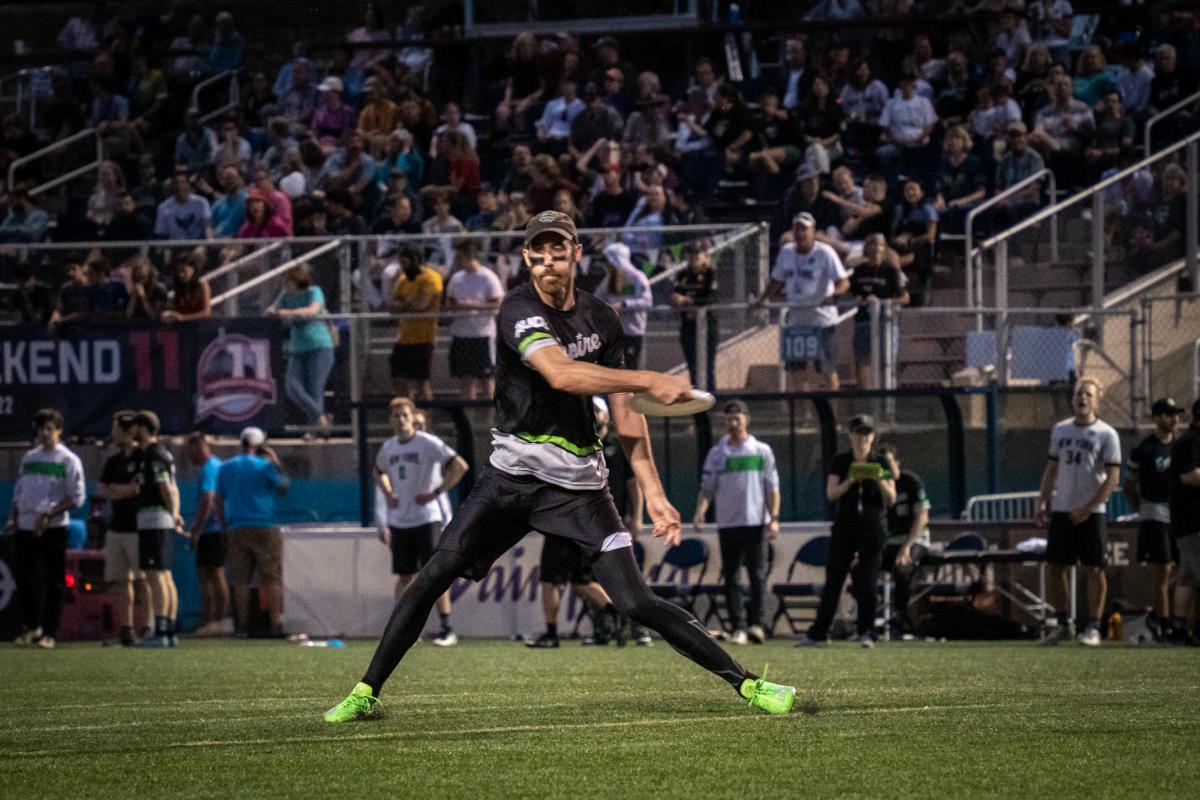 It wasn’t the lead storyline in Week 6’s Tuesday Toss, but in hindsight, it could have been.

“And then on Saturday the Empire moved Ben Jagt, the two-time reigning AUDL MVP, onto the D-line,” Evan Lepler wrote in a recap of New York’s 25-8 thrashing of the Toronto Rush that improved the Empire’s 2022 record to 7-0.

As Hoppes recounts it, the Jagt shift to New York’s defensive line was months in the making. And it was made possible by New York’s acquisition of speedster Antoine Davis–a veteran who, like Jagt, had played an overwhelming majority of his points on offense.

Davis, however, was committed to defending for New York from the moment he signed his contract.

“It was obvious for me from the beginning that I would be put on the Empire's D line,” Davis recounted. “New York’s greatest weakness in 2021 was that its defense could not get blocks and convert the few blocks that it got. Also in the first conversation with Jeff Babbitt, we were just imagining what kind of chaos we would cause if we were both on the same D line. I never really care about where I am placed on the field. I just want to be placed in the best position possible to help our team get the win.” 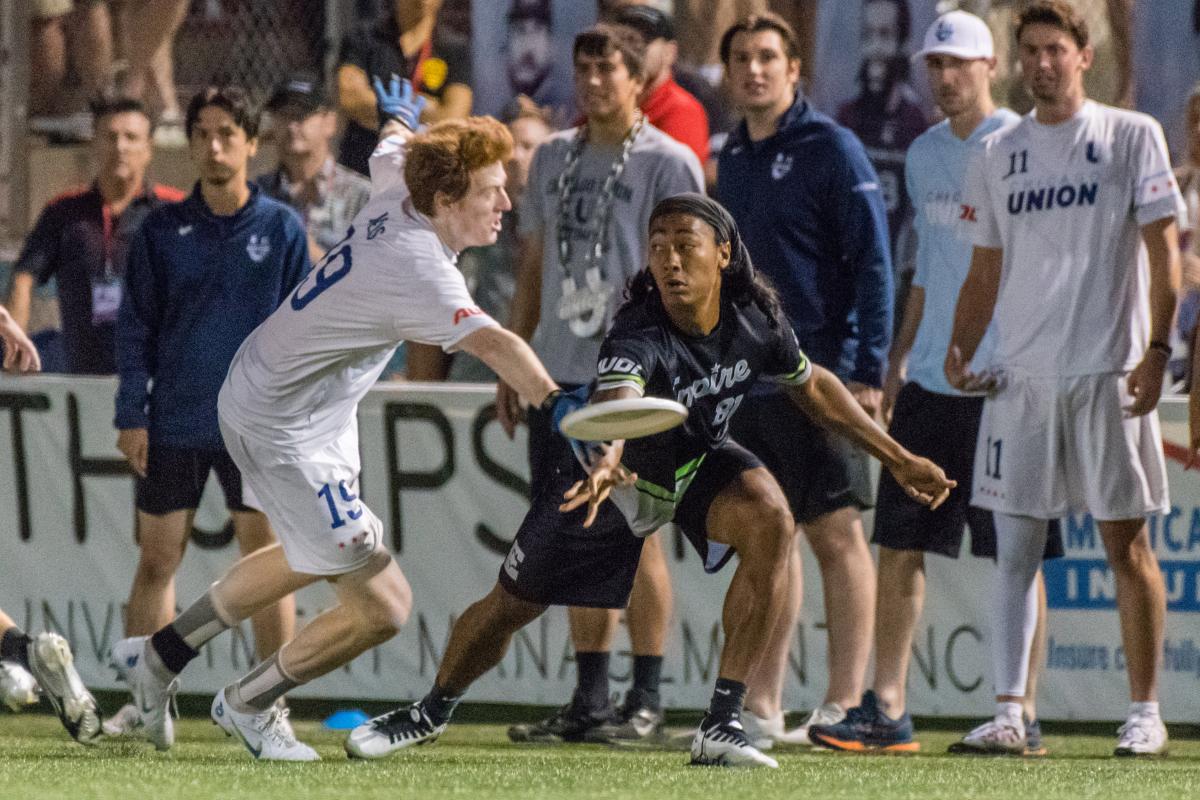 “The off-season is a time to kind of imagine what the team could be, and we talked about what kind of impact Ben Jagt could have on our defensive line,” Hoppes said, referencing the shortened offseason after New York lost to the Carolina (formerly Raleigh) Flyers in the 2021 AUDL Championship Game. “Our D line finished last in opponent turnovers per game in 2021, and we knew that adding Antoine would be a giant help with that. But moving the defending two-time MVP off of offense seemed like a giant leap to make.”

“As we started playing more games, it seemed with the addition of Charles Weinberg, and with Elliott Chartock, Sol Rueschemeyer-Bailey, John Lithio and Ryan Osgar all playing at an even higher level in their second seasons with the team, it felt like we could keep the offense clicking at a good clip even if we made a move,” Hoppes explained.

And according to Jagt, while those leadership conversations and the Davis acquisition were important to Jagt’s shift, New York’s redeployment of Babbitt from defense to offense made a major difference, as well.

“I've been pushing for [Babbitt] to be on the O line since last season,” Jagt said in late June, referencing the Empire’s 2021 campaign. “His talent coming down with the disc in contested situations is unmatched. Anyone who isn't forcing him under is going to get scored on deep nine times out of ten. So with [Babbitt] moving to offense, I was a natural fit for the D line. [Babbitt] and I have different abilities but I think the deciding factor was that I have a lot of O line experience for the turn and a stronger tendency to get the disc when we are playing offense on a turn.”

“Jack Williams called me and said leadership was thinking about moving me to defense but there was some worry that I might not be willing to make the switch,” Jagt added. “And being someone who prides himself on being a teammate who wants what's best for the team in every scenario, I assured [Williams] that I was all in and felt like it would be a great fit. Charlie gave me a call a little later to iron out all the details and the deal was done at that point.”

Warming up to change

While New York deliberated and moved an MVP-caliber talent to defense midseason, Jagt’s original franchise made a similar adjustment after just two games in 2022.

Former All-AUDL selection Abe Coffin played with Dallas from 2017 to 2021, helping the then-Roughnecks reach two Championship Weekends while playing the lion’s share of his points on offense. But Minnesota Wind Chill Head Coach Ben Feldman and his coaching staff quickly chose to deploy Coffin and his towering pulls on his defensive line.

“I think the idea came up from preseason minicamps and practices during scrimmages when I would be pulling and Feldman would make a couple of comments about moving me to defense because of those pulls,” Coffin said. “I think it developed after a couple of games of figuring out what worked on offense and defense through the first two games.”

“When the coaching staff first mentioned it to me I was onboard with the idea,” Coffin added. “I think, with how much of the Wind Chill offense carried over from 2021 in terms of personnel, it seemed like an easy switch for me to go generate turnovers or assist in our break opportunities when we did get a turnover and attack offensive lines that don't particularly want to play defense.”

Many teams already cross star offensive talents over to defensive lines in crunch time and after timeouts. But given the successes New York and Minnesota enjoyed from the Jagt and Coffin redeployments, many expect other franchises to try moving their own stars around more frequently or permanently.

“I think in a couple of years, as the league continues to get deeper and deeper, I can see that becoming a routine thing where offensive stars from previous years will be on defense in more situations than a couple points per quarter or game in order to convert break opportunities when they generate turnovers,” Coffin said.

“I think it's really prudent to have top offensive players play D points,” Hoppes added. “I think in the AUDL, there is a priority on stacking an O line, and rightfully so. Having an efficient offense can raise a team's floor, keep it consistent and prevent the team from getting run out of games. But having a dynamic scoring defense can raise a team's ceiling, either helping to pull away from other teams or to punch above their weight and hunt for upsets. If teams can afford to move an offensive talent to a D line without crippling their O line, I think they will.” 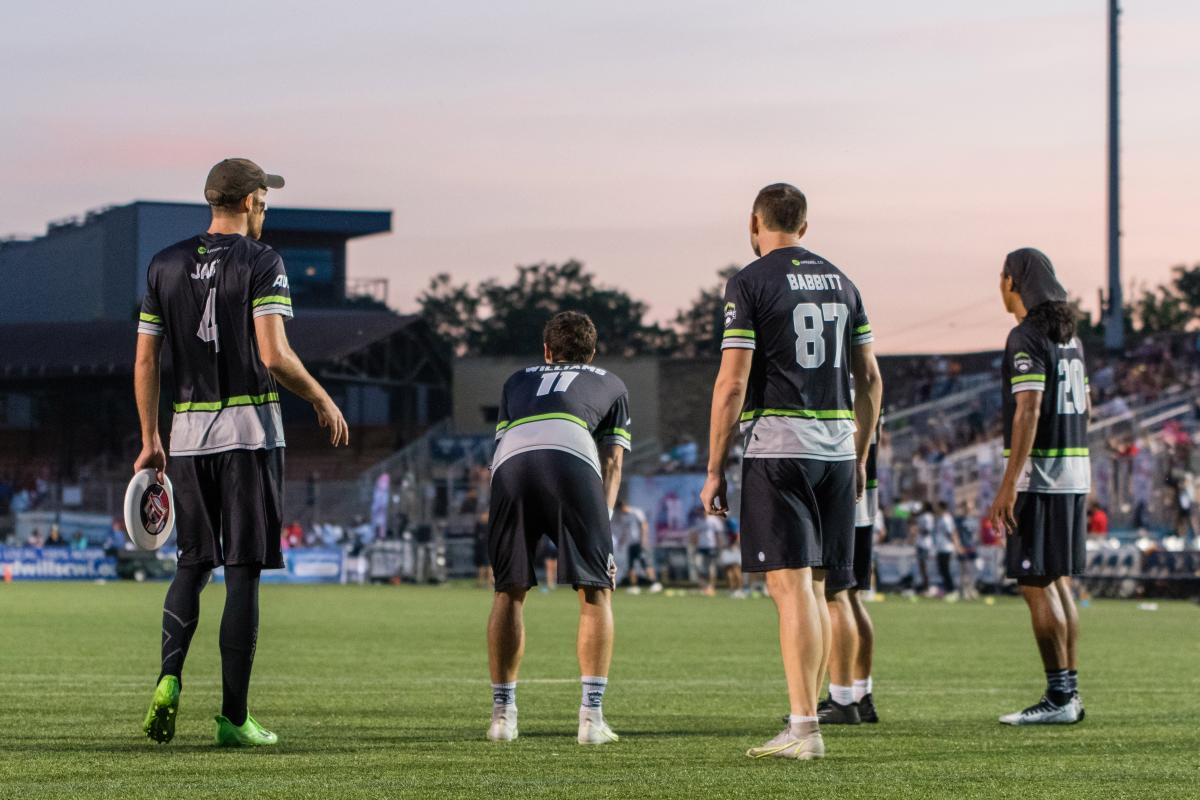 “There seems to be a trend in elite ultimate where teams put all the emphasis on their offense line,” said Coach Dave Woods, whose Chicago Union bested the Wind Chill and fell to New York in the 2022 AUDL Championship game. “The ‘top players’ on the team play offense. The thought is that if your offense can score over 90 percent of the time you should win nearly every game. I am not in this camp.“

“I am in the camp that if you have a good system in place and/or good chemistry on your offensive line that scoring should be easy,” Woods continued. “The onus is on your defense line. In ultimate, you need a line of athletic defensive players who can read offenses, react to opposing players and take them out of the play, generate blocks and then convert breaks.”

“Legendary football coach Paul ‘Bear’ Bryant is credited with having famously said, ‘Defense wins championships,’” Woods added. “I think this quote is great for a sport like football where the defense's only job is to stop the opposing offense long enough to bring on their own offense to score. But in Ultimate, you have to score after the defense becomes offense when the same players are on the field. When it comes to Ultimate, I would argue your defense's ability to score wins championships. Perhaps needless to say at this point, I love the emerging trend of coaches shifting some top offensive players over to the defense.” 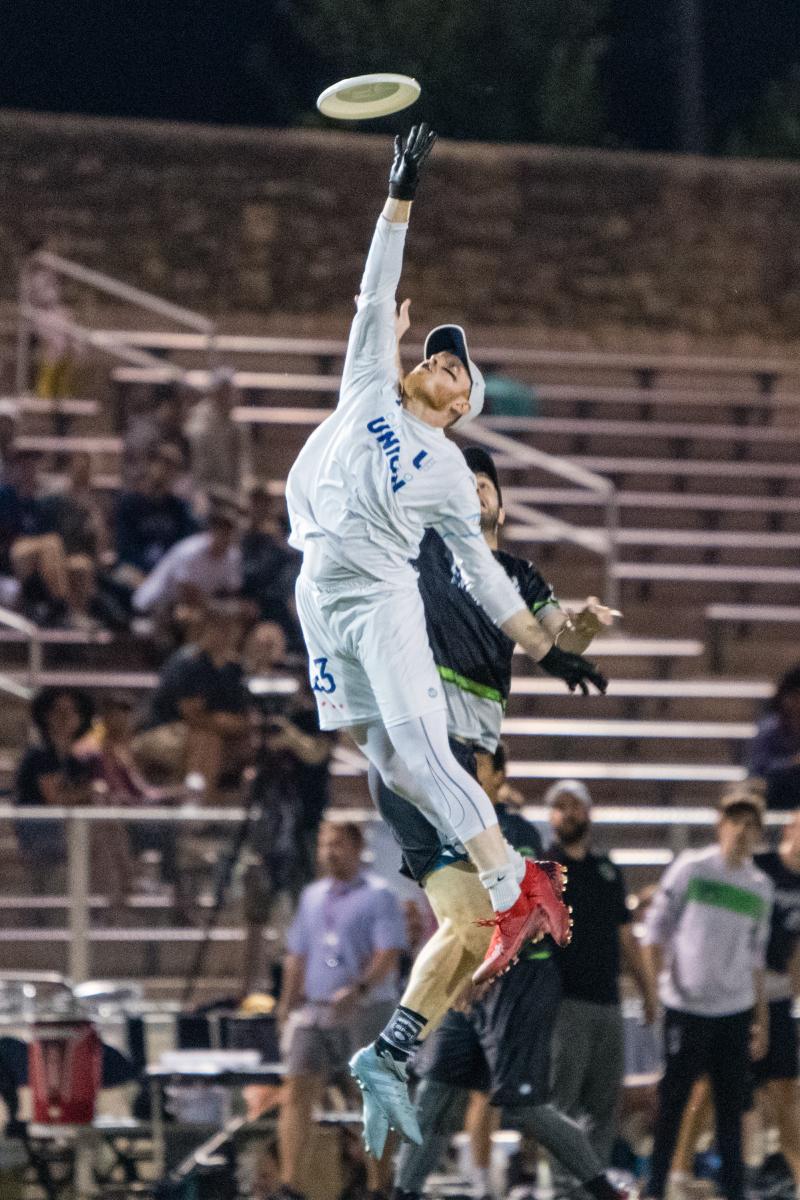 “I think if teams have a surplus of ‘O-dominant’ cutters or handlers that it's great to cross them over to help increase a D line’s break conversion rate,” said Dalton Smith, Coffin’s former Dallas teammate who played a majority of his points on defense when available for Chicago in 2022. “It can help save timeouts for more pressing situations and give the D line another weapon on the turn.” 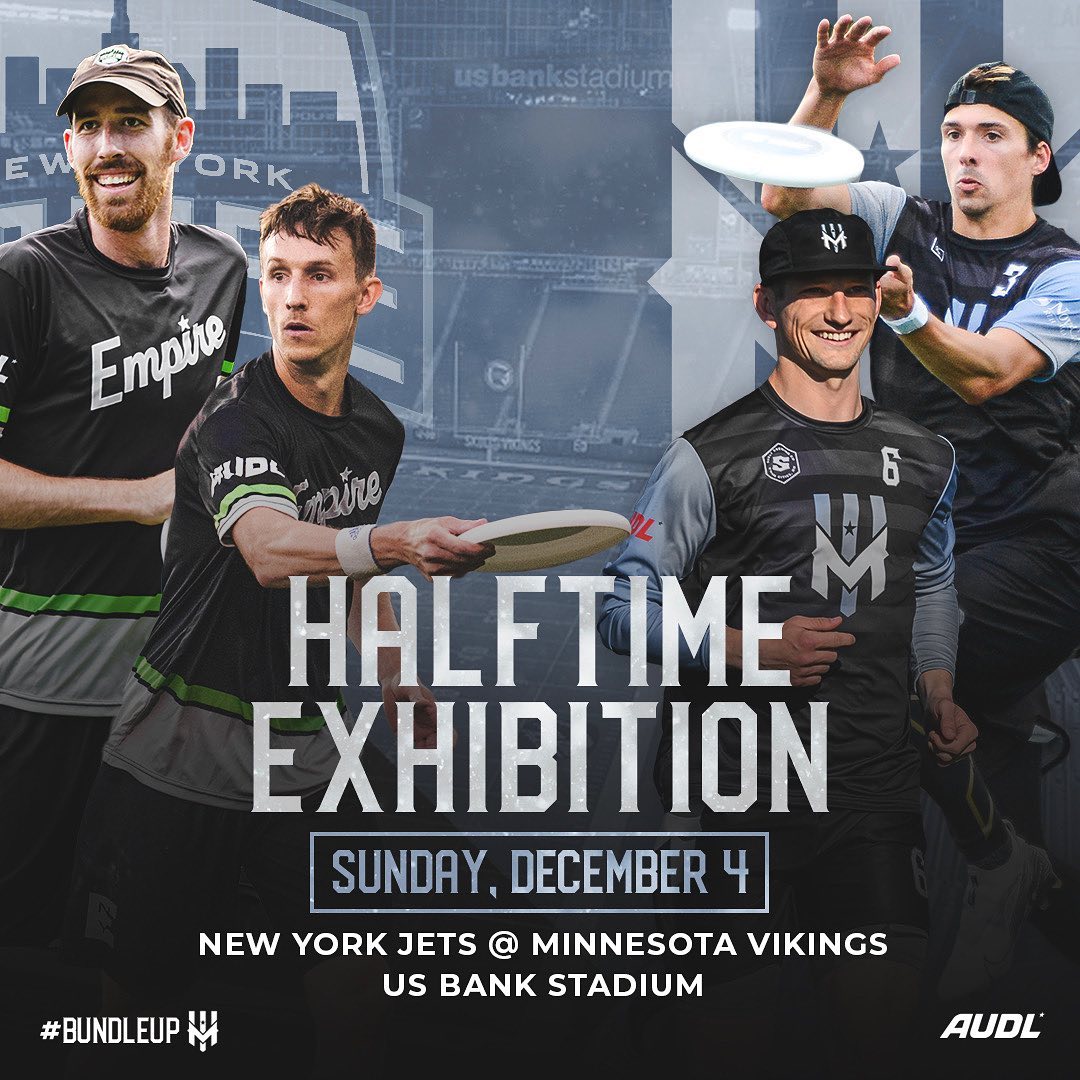