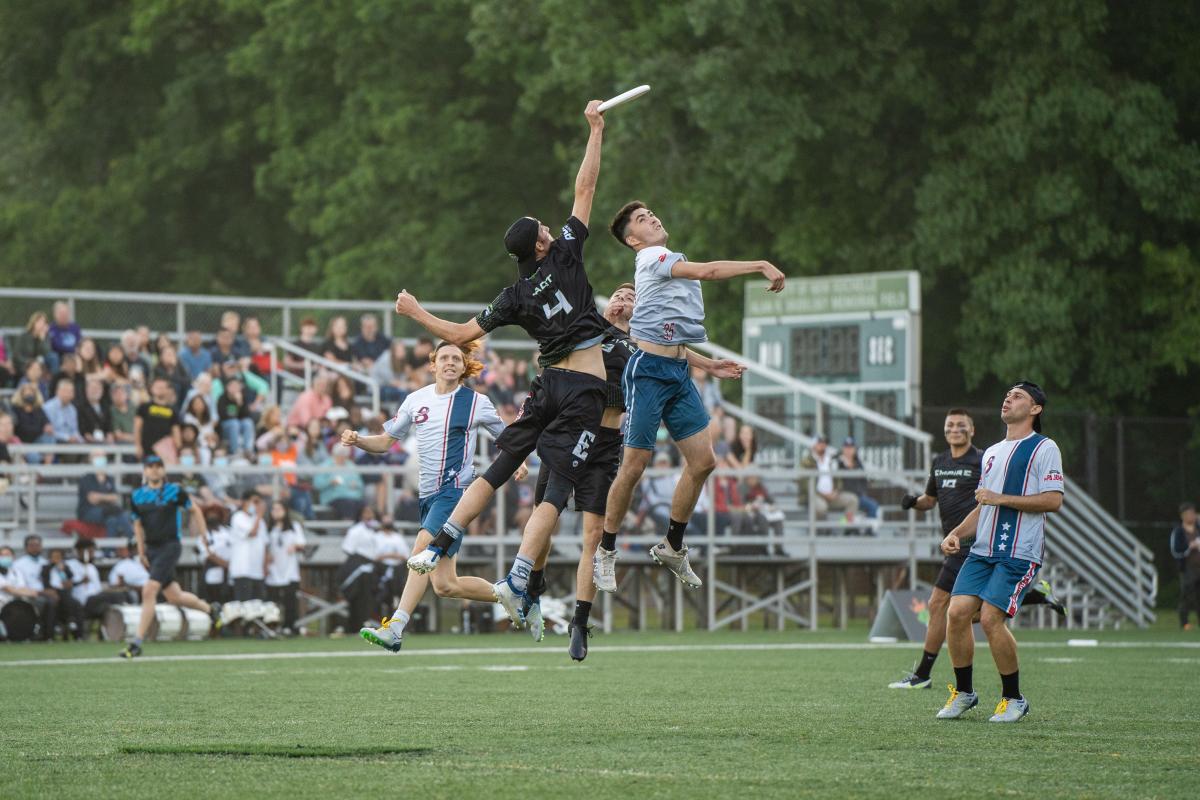 After coming up just three goals shy of their second consecutive AUDL title last September, the New York Empire spent the offseason re-signing and reloading a championship-caliber roster with additional all-star talent. But their longtime interdivisional rivals the DC Breeze also upgraded over the winter, adding a fleet of playmaking veterans to a lineup that already features a former MVP and the 2021 Defensive Player Of The Year. 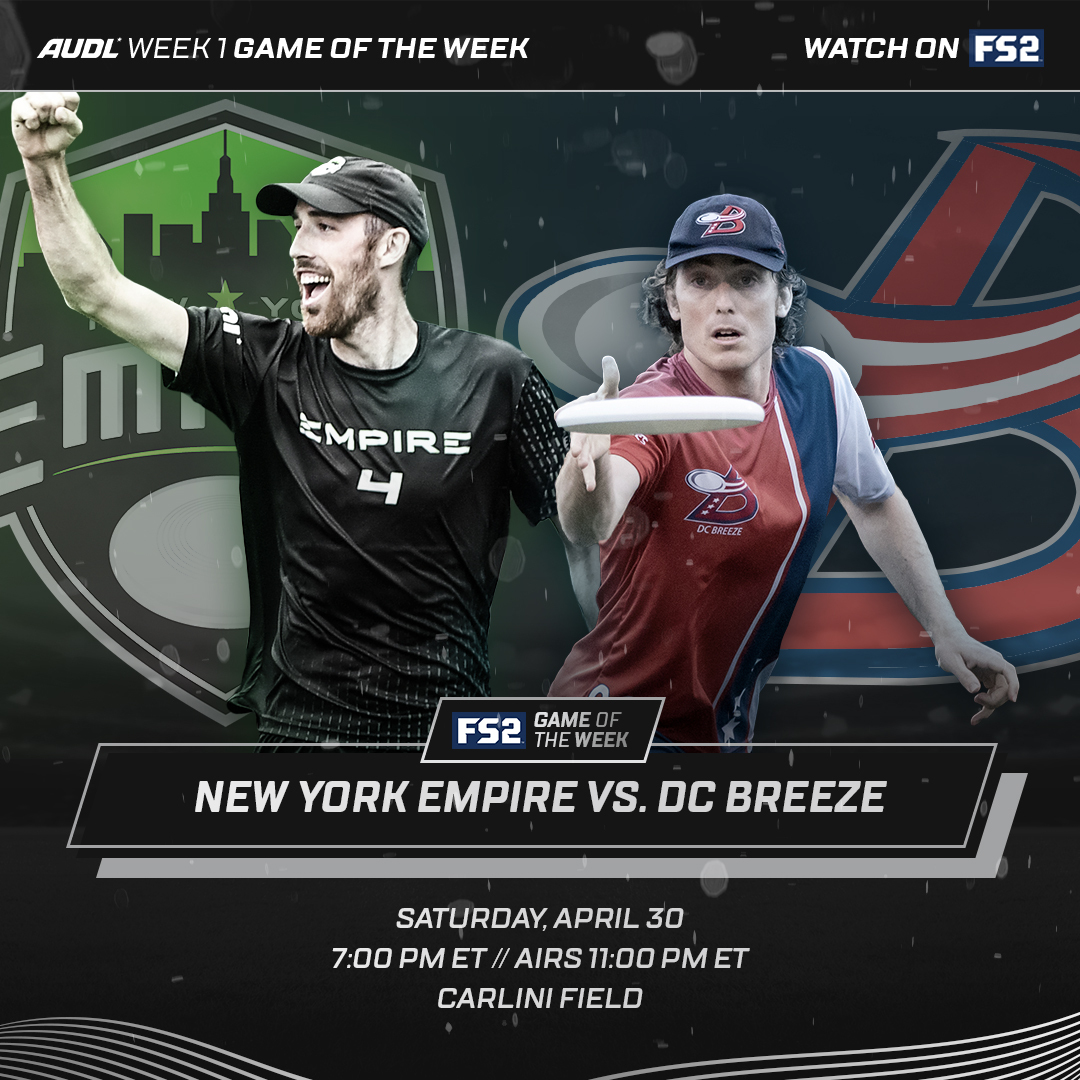 Both squads consider themselves championship favorites heading into the new season, and the “AUDL Game Of The Week” stage is certain to ratchet up the intensity of an already fierce feud; overtime is all but routine for these two teams, as they battled through regulation and into sudden death just two weeks ago in a preseason friendly in Colombia.

Saturday figures to be no different.

“People just take [the rivalry] personally and have a lot of pride in their team,” 2021 All-AUDL member and Empire star Ryan Osgar told Evan Lepler in the Tuesday Toss after catching the game-winning goal in their April 16 exhibition. 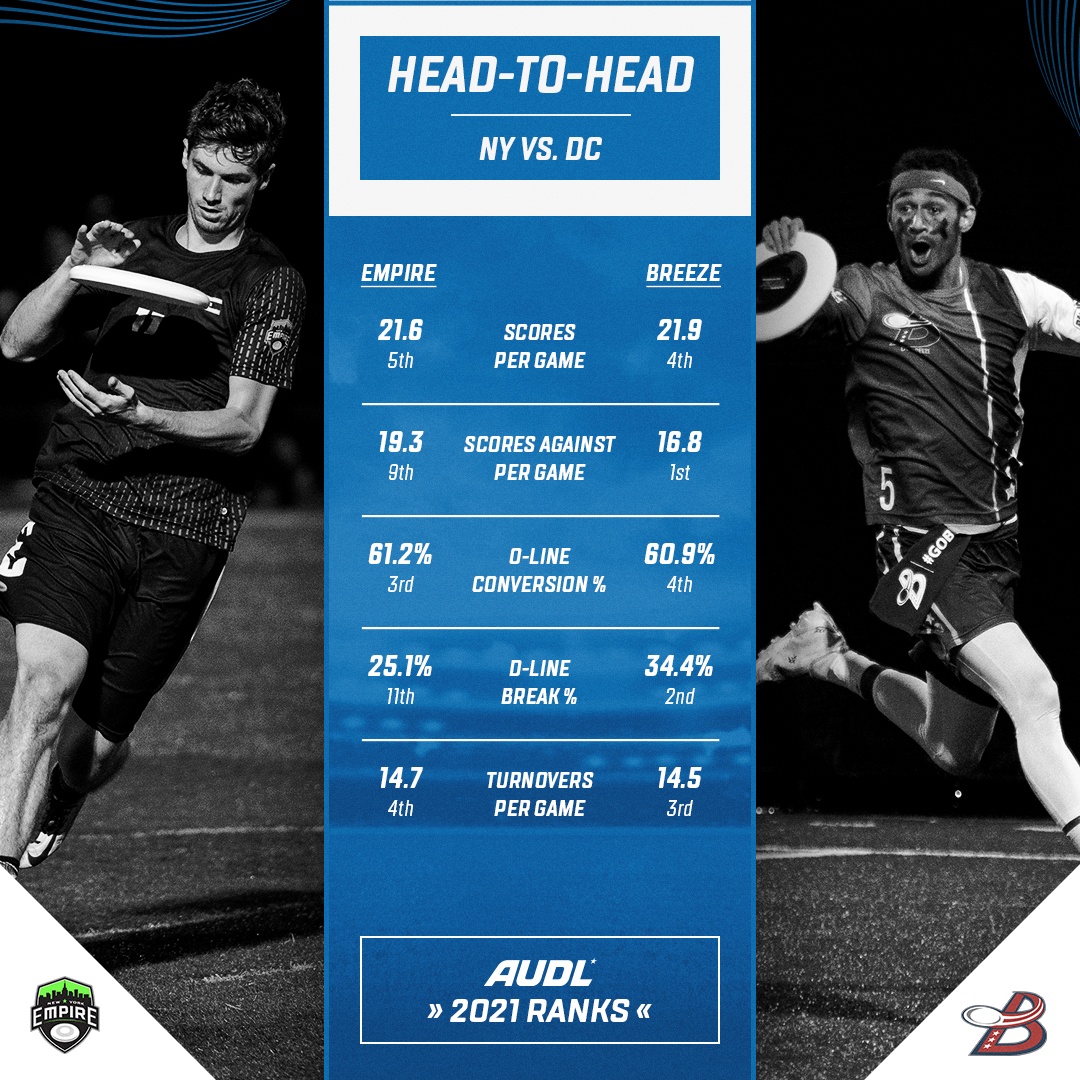 Osgar, along with Jack Williams, Jeff Babbitt, and two-time reigning league MVP Ben Jagt, form the nucleus of a New York roster that has reigned over the division the past three seasons, representing the East each year at Championship Weekend since 2018. Now that rotation adds former all-star Antoine Davis, a standout offensive striker for an Atlanta team that nearly eliminated New York from the playoffs last season, as well as great rotational pieces in Charles Weinberg, Mark Lin, Ethan Fortin, and Scott Xu; Weinberg is listed as questionable for Saturday's in his Empire debut. It’s an embarrassment of riches for a starting lineup that was already considered the best in the AUDL, and now adds depth on both offensive and defensive lines.

Davis may have played primarily on offense last season in Atlanta, but his worth for this New York team is most evident on the defense. The Empire finished in the bottom half of the league last season in defensive break conversions, and with Davis’s ability to both generate turnovers—he has 55 blocks in 52 career regular season games—and become a primary attacker off the turn, he and Babbitt could become a Bash Brothers-like duo against opponents throughout the 2022 campaign.

But if there is a team equipped to handle the Empire, it might be the Breeze. The team finished top five in virtually every team stat category last season, and they return nearly every starter. They’ve also re-added three battle-tested studs in Delrico Johnson, Tyler Monroe, and Alan Kolick. All three will be active on Saturday night, and all three have the potential to take over the game for stretches by themselves.

Reigning DPOTY (and 2021 Most Improved Player) AJ Merriman spent another winter honing his craft and getting better at all levels of the game; he’s already had a breakout season at 21 years old, so the next level is hard to imagine, but it’s coming. Merriman paced a Breeze unit that finished first in scores allowed per game, and second in break efficiency. DC’s defense will once again be a premier unit in the league in 2022.

Offensively, the Breeze will likely be without 2021 All-AUDL handler Jonny Malks for the game. But one of DC’s strengths is its depth of throwing talent, and with Johnson, Kolick, Zach Norrbom, and 2018 MVP Rowan McDonnell all active, the Breeze will not be short on distributors. And with Monroe and Christian Boxley rejoining the team after a hiatus, DC’s receiving core is deeper and more balanced than ever. Joe Richards showed he can be a true number one target, and his ability as a big will be complemented perfectly by Boxley’s deadly speed, and Monroe’s ability to attack as a striker.

DC and New York split the season series in 2021, with each team winning their respective home matchup. There is only one other matchup between them this regular season, making this “Game Of The Week” key for getting the inside track on the number one seed in the division, and a home field playoff game.