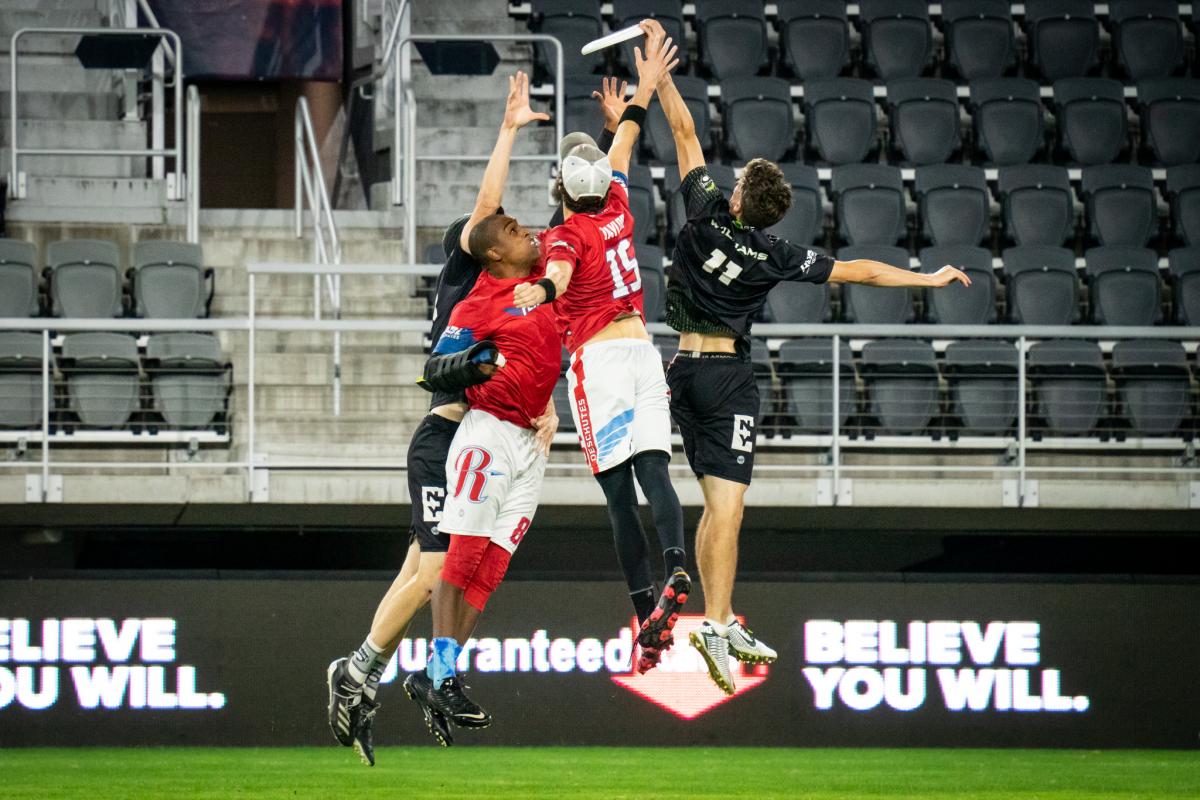 That’s been the final results of the first three epic meetings between the Carolina Flyers and New York Empire, with the Empire claiming the first two victories during the 2019 and 2021 regular seasons, and the Flyers getting ultimate revenge 19-16 in last year’s AUDL title game. Now Carolina must protect their crown against a New York franchise looking to make history with their second undefeated season in three years. 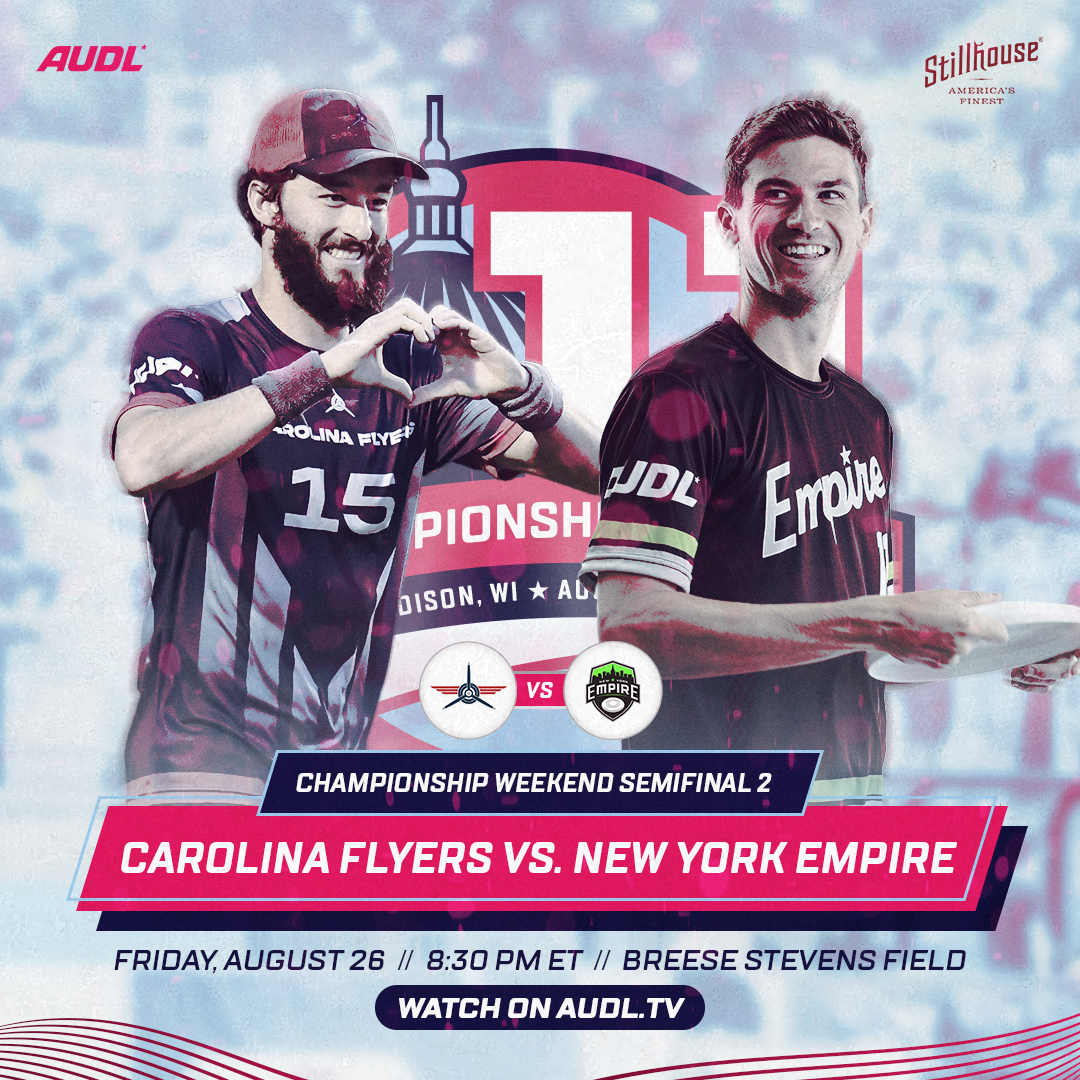 “That New York team is great, they’re driven by great players, they have probably better top-end talent than us, but we had the better team,” said Carolina Head Coach Mike DeNardis after the 2021 championship game.

On the biggest stage, the two title contenders combined for just 17 total turnovers in their last matchup, and played one of the cleanest games on record. The Flyers offense allowed just two total break opportunities in the game, and seven different Carolina players completed 10 or more throws without a turnover.

But the Empire—as they’ve done for years now—retooled and reloaded during the offseason. Antoine Davis, Charles Weinberg, and John Randolph have all been all-star level additions masquerading as role players in their first seasons in New York; Jibran Mieser rejoined the Empire this year after missing the 2021 season, and added another lockdown defender. New York wanted to add defensive strength and alleviate the load from their primary playmakers, and the new blood did just that. 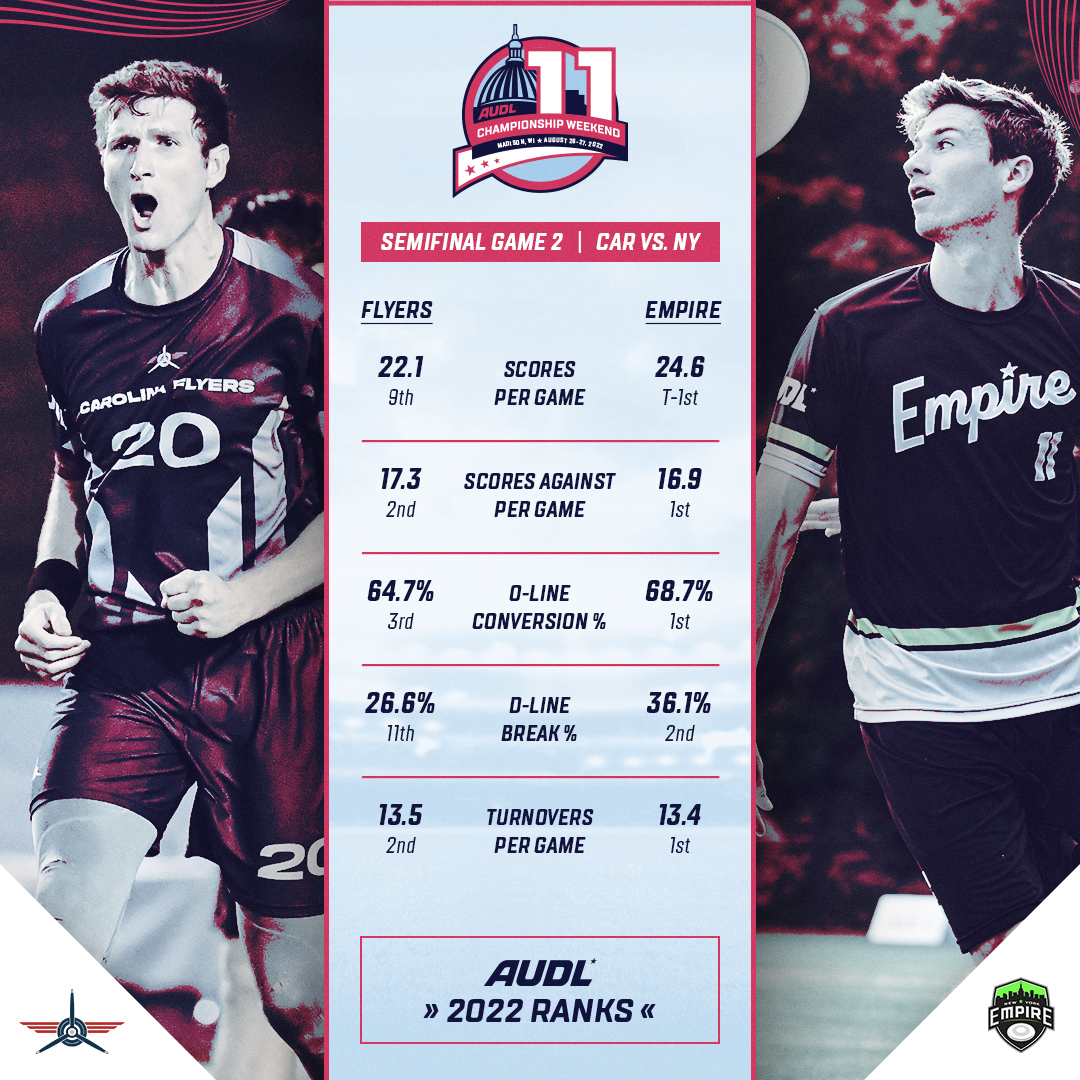 These roster moves also allowed NY the flexibility to experiment with their stars, and the coaching staff elected to swap Ben Jagt and Jeff Babbitt in their respective roles on offense and defense with terrific results. Bolstered with new talent and anchored by the two-time reigning MVP Jagt, the Empire defense went from ninth in goals allowed per game in 2021 (19.3) to first in the AUDL this season (16.9); only one team (DC Breeze) has scored more than 20 goals on the Empire this season.

Offensively, the Empire have the highest O-line conversion rate in AUDL history thanks to the nucleus of Babbitt, Jack Williams, and Ryan Osgar. Coming off of one of the most impressive passing regular seasons in league history, Osgar has been an archer with the disc in 2022, able to execute and optimize this Empire offense to its fullest potential. Babbitt is the biggest target in the league when he’s on the field, and leads the team with 50 goals. Williams was once again electric in the playoffs for New York last Saturday, racking up seven scores and over 500 yards of offense and throwing another game-winning walk-off assist to send the team to Championship Weekend.

And yet in spite of the impressive stats that bear out the Empire’s dominance this season, the Flyers are singularly equipped to deal with New York’s power. For just like last year’s championship match, Carolina’s offense has succeeded this season in simply not giving opportunities for break scores. The Flyers boast the lowest opponent break rate in history, and are allowing just over two break scores per game in 13 games in 2022. Sol Yanuck and Matt Gouchoe-Hanas remain the most unbreakable backfield in the league, and the return of 2021 Rookie Of The Year Anders Juengst after missing months of play due to injury has recharged Carolina for their title defense. And with Alex Davis, Jacob Fairfax, Terrence Mitchell, and Henry Fisher patrolling downfield, there’s no shortage of receiving options.

The Flyers defense was super effective at disrupting the potent Empire continuation attack in their last meeting as New York completed just 2-of-5 hucks. DC had similar success in limiting the Empire’s deep looks in last week’s East Division title game, so expect Carolina to once again attempt to flatten out New York’s attack, and take away the vertical dimension of the field. Eric Taylor’s pulls have been terrific at pinning opposing offenses deep in their own territory to start drives, with Carolina’s switch-heavy coverage and handler pressure stunting offenses at the point of attack. Taylor and Tim McAllister will likely have the task of trying to stop Williams in reset spaces, while a host of different Flyers defenders could spend time on limiting Osgar in his striker role.

Two franchise legacies are on the line tonight at Breese Stevens Field, as both teams have their sights set on joining Oakland as the only AUDL franchises with multiple titles.