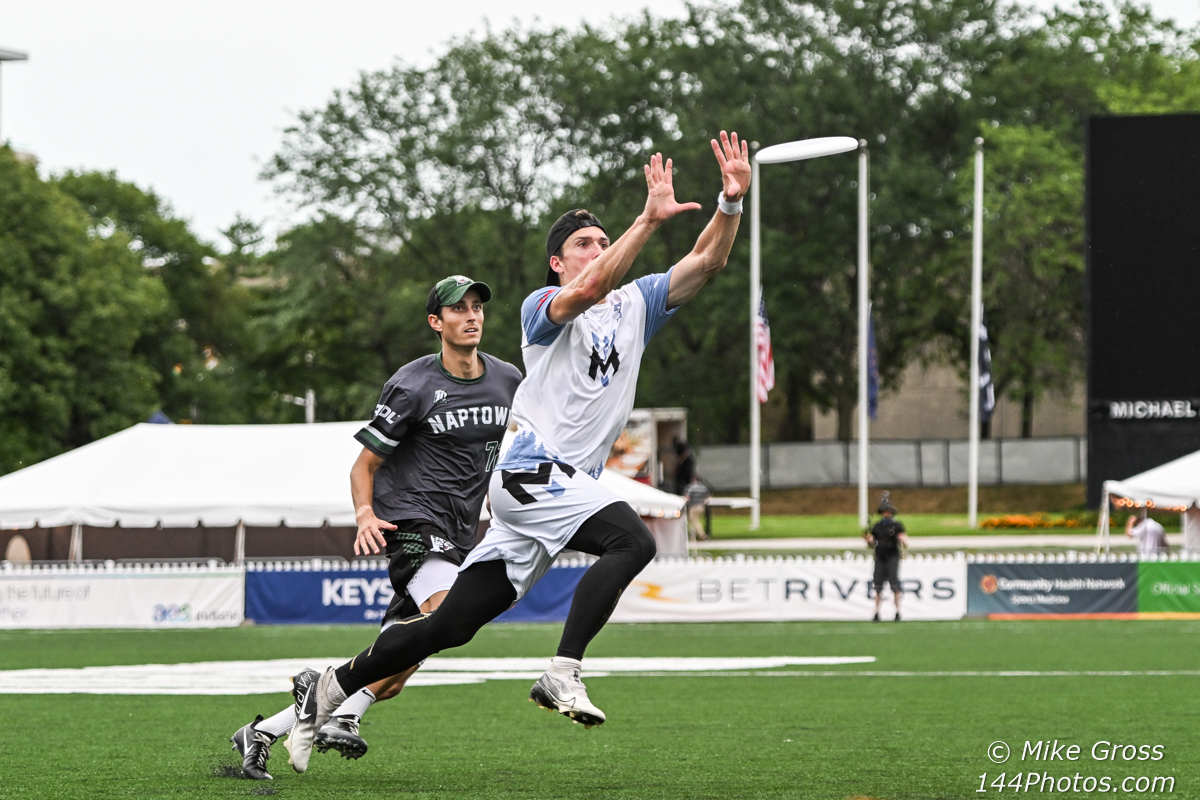 Watch the opening round Central Division playoff game on watch.AUDL.tv LIVE at 7:00 PM/ET on Saturday, August 13

For the second time in the nine-year series between these two Central Division rivals, the Indianapolis AlleyCats and Minnesota Wind Chill will meet in the playoffs. The Wind Chill claimed both regular season matchups this season against the AlleyCats, but have never won a playoff game in franchise history; Minnesota has qualified for four of the past five postseasons; the ‘Cats defeated the Wind Chill 20-19 in the divisional round of the 2018 playoffs. 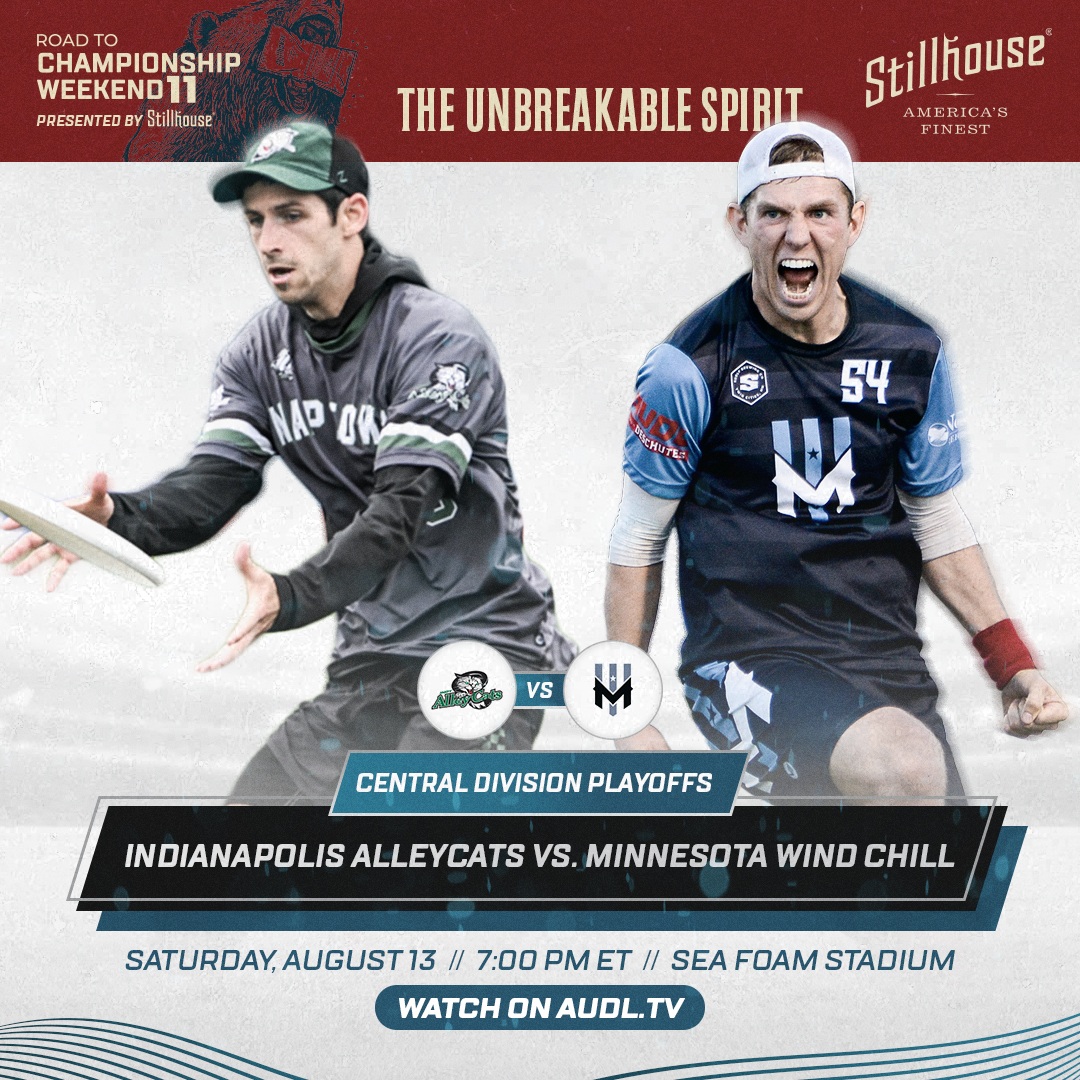 But this 2022 Minnesota roster is its deepest and most talented to date, stocked on both lines with playmakers and veteran leadership. Bryan Vohnoutka is leading the team in scoring for the second straight season, filling in once again as an all-star swiss army knife on both offensive and defensive rotations. Canadian import and 2019 rookie standout Quinn Snider rejoined the team after missing the 2021 season due to COVID border restrictions, and has immediately plugged back in this season as one of the most prolific goal scorers and downfield receivers in the league; Snider and Cole Jurek will be a handful for the Indy defense to contain all game. Dylan DeClerck once again paces one of the top takeaways defenses, and has been better than ever in the counterattack; Minnesota’s defense finished first in the AUDL in break rate (i.e., the total scores a D-line produces over the total points a D-line plays). Throwers Andrew Roy and Josh Klane have found their rhythm as a backfield duo in the past month, and have the Wind Chill offense rounding into its full potential at the perfect point in the season.

This Minnesota squad is so loaded with throwing talent, they’ve slotted Abe Coffin in as their defensive pulling starter in his first season with the Wind Chill. In four pro seasons before this year, Coffin never played more than 73 points on defense in a regular season—including zero with Dallas last season—and now is second on Minnesota with 193 D-line points played, and tied for third on the team in blocks; Coffin has a team-high 155 pulls this season, and had 31 total in his previous 36 regular season games.

And yet for as high as the potential is for this Wind Chill team, consistency has been an issue all season, particularly on offense. Take their last six games of the season: four performances with 62 percent or better offensive conversion rate (which would rank in the top five in the league), and two games with a sub-50 percent mark (bottom eight), including their final game against Detroit where the Minnesota offense converted just 10-of-21 O-line opportunities. 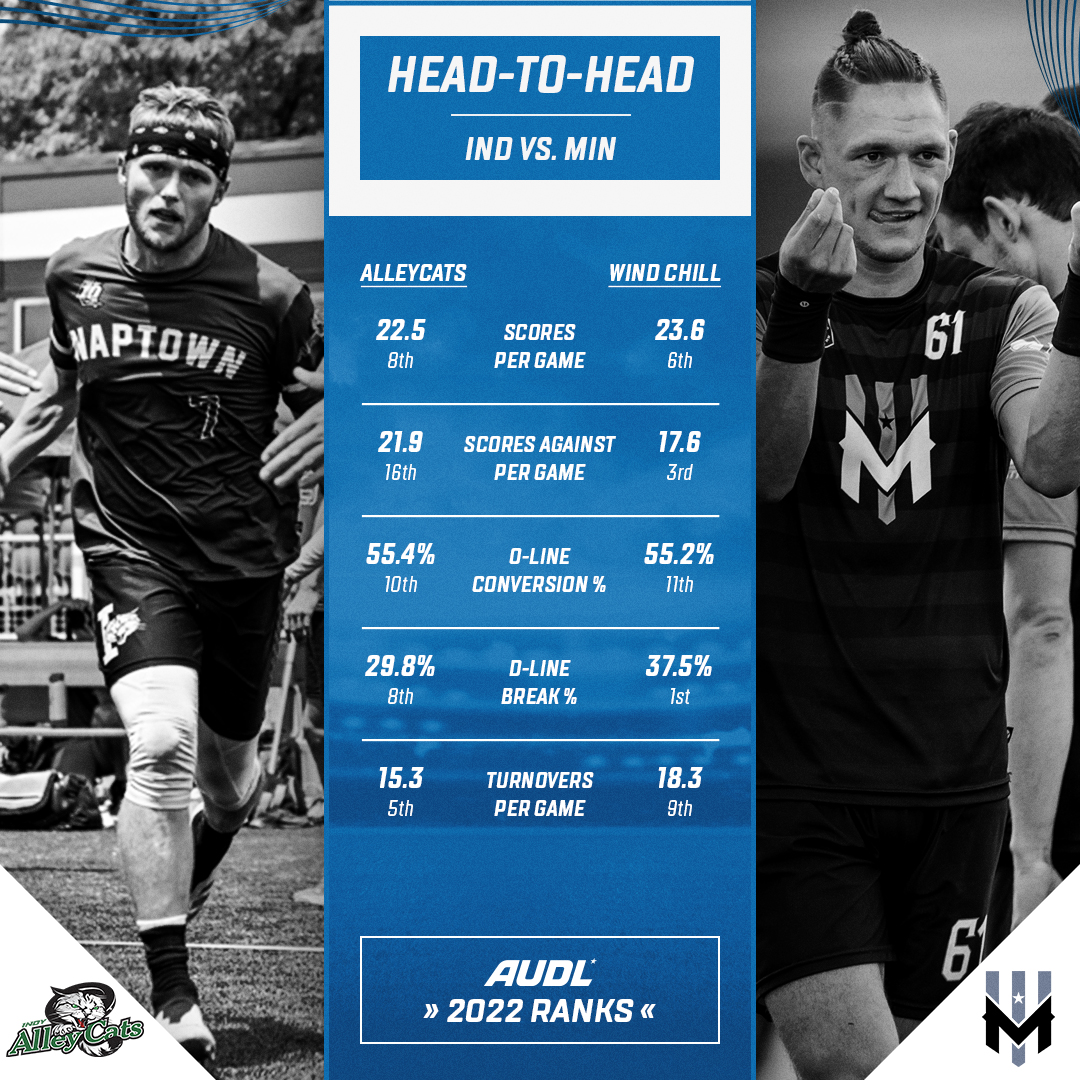 If the Wind Chill struggle with execution errors and turnovers, there is no more efficient team in the history of the AUDL at converting break scores than the 2022 AlleyCats. Indy’s 68.8 percent break conversion rate this season is less than a single percentage point lower than New York’s record-setting offensive conversion rate; the ‘Cats defense is nearly as efficient as the best offense in league history. Xavier Payne has been the man on point for the counterattack in his second season with the team, and ranks as one of the best D-line scorers in the league; even without Payne in their final regular season game against a very good Atlanta offense, Indy’s D-line converted 7-of-11 break chances; Payne, Jacob Fella, and the ‘Cats as a whole excel at attacking in transition off of opponent turnovers, which is why they’re so effective while ranking 21st in takeaways per game this season.

Offensively, Indy runs a very similar and regimented brigade as in seasons past, with the backfield (Lucas Coniaris and Carter Rae) responsible for possession-based tactics and initiating action, while the continuation strikers (Keegan North, Levi Jacobs, and Rick Gross) feed throws to downfield receivers (Cameron Brock, Jeremy Keusch, North, and Jacobs) in precise continuation sets. With North and Brock back in full-time starting roles, the AlleyCats O-line has two of the most productive offensive scorers around, and it has provided the team even more clarity and rhythm in their drives; Indy’s turnover numbers have plummeted since last season, with the ‘Cats going from 19.1 turnovers per game in 2021 to 15.3 this year.

Since losing to the AlleyCats in the 2018 playoffs, Minnesota is 5-2 against Indy, including two straight regular season sweeps. If the Wind Chill offense is the good version of itself, the DraftKings favorable line makes sense for the preseason division championship favorites. But if Minnesota falters, Indy is disciplined and battle tested enough to take advantage of their mistakes on the road.