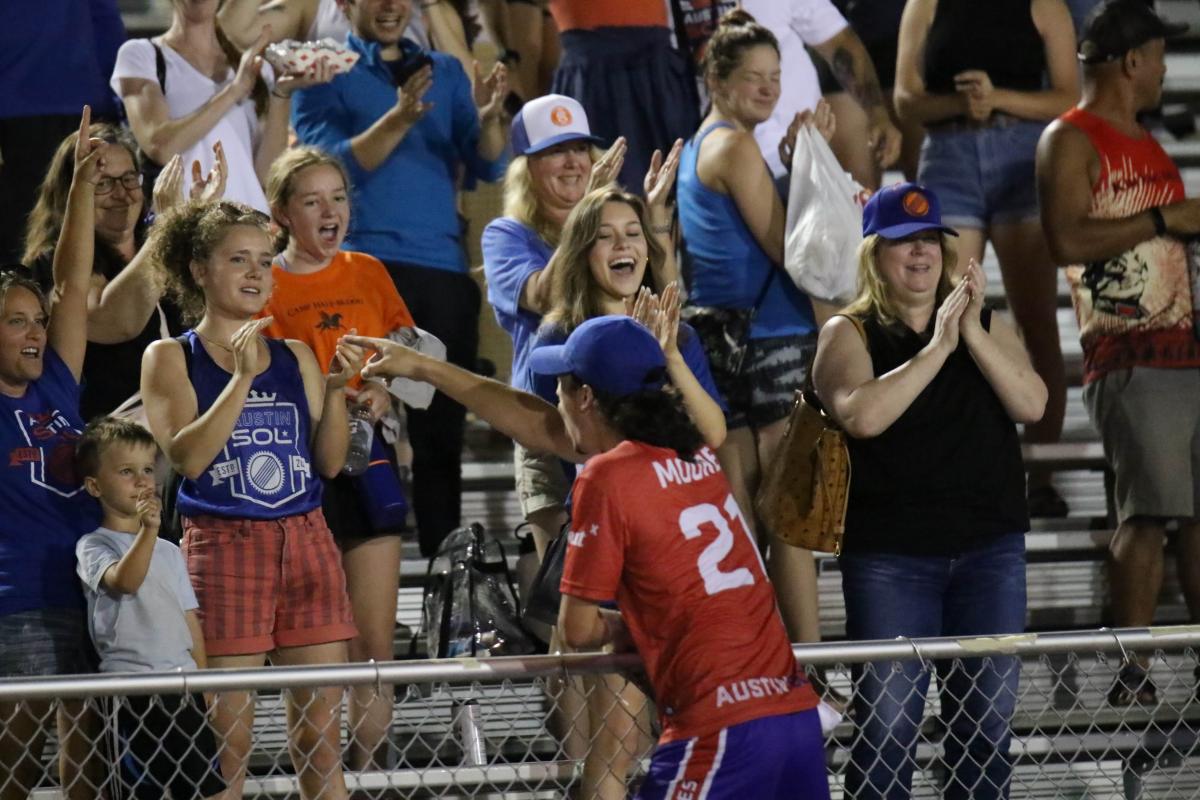 Parker Bray, Atlanta Hustle
Despite a couple inconvenient and uncharacteristic turnovers, Bray’s all-around performance in helping to lead the Hustle past Boston earns him a spot in this week’s superb seven. Quite simply, his team entrusted him with more individual responsibility than anyone, and he massively delivered with clutch moments throughout the night. He finished with 351 throwing yards and 322 receiving yards, leading all other competitors in the game in both those categories, along with four assists, four hockey assists, one goal, and most importantly, one gigantic road win for the now 2-0 Hustle. Through two weeks of AUDL action, only Bray and Indy’s Travis Carpenter have recorded 300+ yards throwing and receiving in the same game.

Jonny Malks, DC Breeze
In a distribution display reminiscent of Abe Coffin’s 2019 South Division title game, Malks also dominated the Flyers with his quickness, decisions, and pinpoint precision. He finished the game 55-for-55 for 454 yards, with seven assists and two goals. Though he was certainly aided by several playmaking receivers throughout the night, it was Malks who consistently steered DC’s offense in the right direction throughout the game, especially in the second half where the Breeze outscored the Flyers 15-11. Only 22 years old, Malks could be a cornerstone of DC ultimate for the next decade, and potentially an All-AUDL staple if he can replicate his early excellence in the weeks, months, and years ahead.

Sean McDougall, Los Angeles Aviators
Sometimes, it’s just nice to be reminded that a veteran’s still got it. McDougall, who turned 31 in February, is far from over the hill, but the sixth year Aviator was personally very uncertain about returning for the 2021 season after dealing with various injuries throughout his career. On Sunday in San Diego, though, McDougall was virtually unstoppable, racking up a game-high 348 receiving yards, more than 100 beyond anyone else in the game. For good measure, he also caught five goals and dished two more, propelling the Aviators to the momentous win over the Growlers and spoiling San Diego’s home opener.

Elliott Moore, Austin Sol
What a weekend for Moore and the Sol! The 22-year-old AUDL veteran—he’s been on the team since 2017—delivered an unforgettable and frankly inspiring performance against his long-time rival, not to mention so many of his former teammates who left the plucky but oft-undermanned Sol for the juggernaut Roughnecks in recent years. Having never previously tallied more than three assists in a game, Moore dished six dimes on Saturday, along with a goal and a pair of blocks in Austin’s cathartic 24-23 victory over Dallas that completely reshaped all rational expectations in the West Division. It’s magnificent to watch a kid improve and become such a huge factor in a groundbreaking result, and Moore’s magic, along with his army of relatively unknown teammates, were absolutely the top story of a wild Week 2 across the league.

Andrew Roney, Tampa Bay Cannons
So Roney’s definitely the first man to make the Honor Roll with seven throwaways, but the fact of the matter is Tampa Bay needed its All-Star to make enough throws to win, which he did. He finished with 64 completions and 619 yards, the latter being second-highest single-game total in the league so far this season. He also became the first person this season with nine assists in a game, several of them clutch tosses to hold off Pittsburgh’s feisty comeback in the Cannons’ 18-15 triumph. After missing the opening weekend of the season, in which Tampa dropped a pair on the road, Roney’s return reminded everyone that Tampa can be competitive against any opponent when he’s on the field, something the Atlanta Hustle must recognize as they put their perfect 2-0 mark on the line in Florida this weekend.

Jacob Sames, Austin Sol
Austin Coach Steven Naji touted several important University of Texas rookies in the preseason, but I cannot fathom he expected Jacob Sames to be quite this good in his AUDL debut. Not only did he complete all 29 of his passes, but he also finished as the only player in the game with at least 200 throwing yards (256) and 200 receiving yards (219). He cut relentlessly and purposefully, frequently finding the open space and making the tough grab when necessary too. Overall, Sames was one of many revelations that Austin showcased in Saturday’s upset win over Dallas, and it will be fascinating to see if the Sol’s early success is replicable, starting with this week’s home game against the LA Aviators, who are coming off their own satisfying rivalry result too.

Pat Shriwise, Chicago Union
With respect to Chicago’s D-line and especially Drew Swanson’s three blocks, the Union’s offense never gave Minnesota any chance to claw its way back on Saturday night in Elmhurst. Shriwise and others executed efficiently and ruthlessly, holding on every O-point until the very end of the third quarter, at which time the Wind Chill cut an eight-goal deficit down to six, far from a scary situation for Chicago. Shriwise finished turnover-free with 21 completions, while accumulating 193 throwing yards and 188 receiving yards; both those yardage totals were the second-highest on the team. He added three goals, three assists, and had three hockey assists too in just 16 points played, as the Union comfortably improved to 2-0 on the young season.