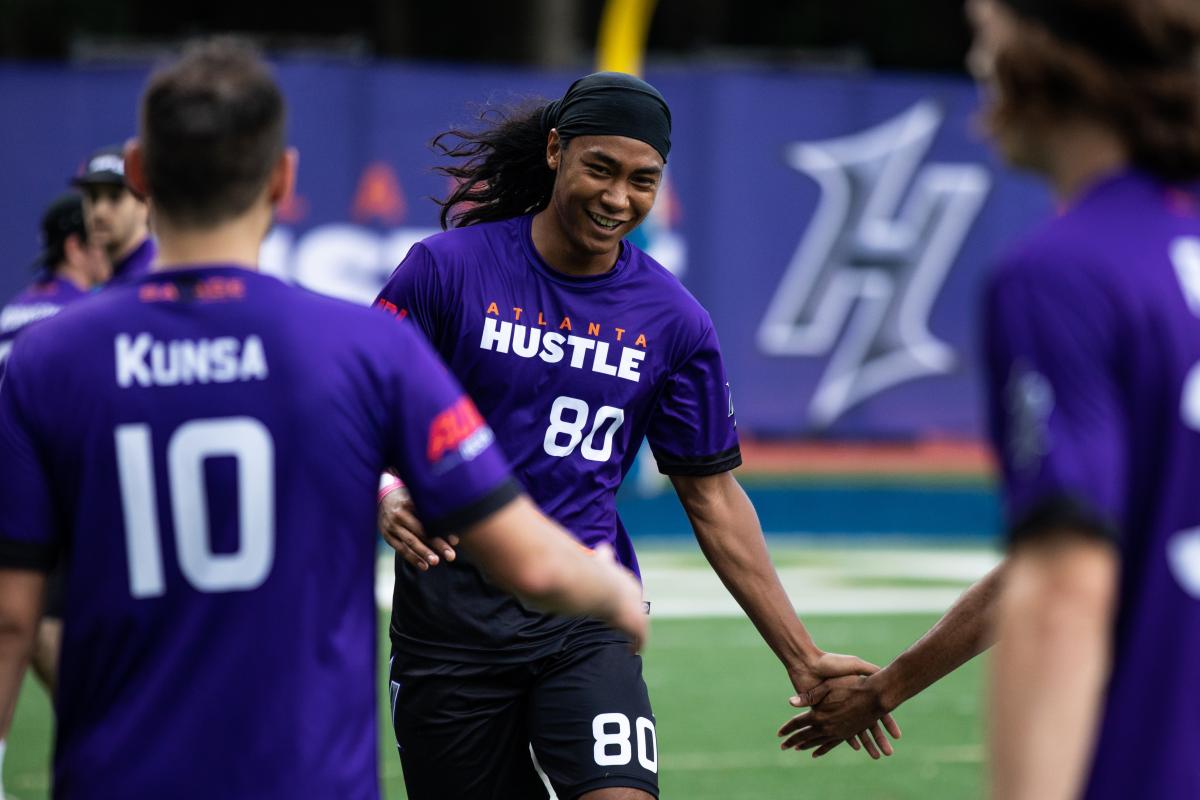 Nick Boucher, Ottawa Outlaws
So, the Canadian Cup is gonna be just as crazy as the rest of the AUDL season, eh? That certainly appears to be the case, as Boucher delivered an unprecedented statistical performance as the Outlaws earned their first win over Toronto in franchise history. Against the Rush, veteran Outlaw dished a career-high 11 assists with two goals and one block, while accumulating more yards in that game than any other player in the entire league this season. His 888 throwing yards were 200 beyond the next best total this year, and his total yardage (1,223) was nearly 300 yards better than #2 on the chart. For good measure, he racked up 568 more yards on Sunday as Ottawa beat Montreal too, as the Outlaws produced their first multi-win weekend since joining the AUDL in 2015.

Antoine Davis, Atlanta Hustle
A couple weeks ago, after the Hustle lost at home against DC, Davis said he and his teammates were busy ‘formulating a response that everyone is going to want to see.’ Message sent and received, as Davis enjoyed far and away his best game of the season as the Hustle outlasted the Empire 22-21. He set the tone by scoring half of his game-high six goals in the first quarter, while also dishing three assists and completing all 19 of his throws, seven of which were hockey assists. His 408 receiving yards were 143 more than the next highest total on his team, and the Hustle enter Week 9 as the only one-loss team in the entire league (obviously not including the three Canadian organizations).

Karl Ekwurtzel, Atlanta Hustle
That’s two straight Honor Rolls for Ekwurtzel, who qualifies this week under the common sense bylaw that states ‘skying the AUDL’s most prolific aerial threat multiple times is worthy of top-level praise.’ While New York’s Jeff Babbitt denied Ekwurtzel once early in the game, Karl quickly got his revenge by victimizing him twice, both of which were game-changing momentum swings. “Karl Ekwurtzel getting some shots in on Babbitt was huge for morale,” said Atlanta’s Matt Smith, “just to show that Jeff is actually human, and if we can get past him we can get past anyone.” In his third straight game playing O-line, Ekwurtzel finished with three goals, two assists, and 265 receiving yards, second-most on the team behind Davis.

Tanner Halkyard, Boston Glory
The list of players who have recorded double-digit plus-minuses in multiple games this season is short. In fact, the list is just one name long. Boston’s Tanner Halkyard finished +11 for the second time in a road game this year, boasting six goals, four assists, three blocks, and 493 total yards in the Glory’s 26-23 road win at Tampa Bay. The 31-year-old AUDL rookie current ranks third in the league in plus-minus, trailing only New York’s Ben Jagt and Philly’s Greg Martin.

Kyle Henke, Dallas Roughnecks
Entering Friday night, Henke understood that he was very likely playing his final game of the season, a result of his fractured scaphoid bone not healing properly and surgery getting scheduled for this week. Incredibly, he remained Dallas’ most dynamic downfield cutter despite playing his fifth straight game with a cast on his left wrist and lower forearm. Against San Diego, one-handed Henke still produced three goals, three assists, and three blocks, while also completing 31 of his 33 passes. By the way, it was the first three-block game of his career. The 23-year-old obviously still has a wildly bright future, but his injury joins the smorgasbord of Roughnecks’ ailments that have hampered Dallas’ ability to find its top form for much of the season.

Danny Landesman, Los Angeles Aviators
The 20-year-old Coach’s son enjoyed his top two games of the season as the Aviators jumped from 1-5 to 3-5 by sweeping their doubleheader trip through Seattle and San Jose. For the two games, Landesman racked up 12 goals, seven assists, and 902 total yards, leading Los Angeles in each of those categories on the weekend. It’s probably too late for the Aviators’ to jump back into the West Division playoff race—though crazier things have happened—but it’s fair to loop Los Angeles into the ‘what-if?’ crowd, wondering how their season could have been different if either of their narrow losses against Austin had gone differently. With so many dynamic young players, the Aviators will be a popular pick to reemerge in the postseason in 2022.

Kelvin Williams, Atlanta Hustle
Plenty of others across the league had gaudier numbers, but Williams belongs because of his game-saving block that clinched arguably the biggest single victory of the season. He also scored a couple goals, including a massive skying snag early in the night, and played turnover-free, but his defensive presence on the night’s final point kept the Hustle out of an unpredictable overtime, knocking down Ben Katz’ backhand intended for John Lithio in the end zone as time expired to secure Atlanta’s 22-21 triumph. It was a landmark result for the Hustle that leaves them in position to very likely finish no worse than second in the division, ensuring a home playoff game for the chance to make the franchise’s first Championship Weekend.