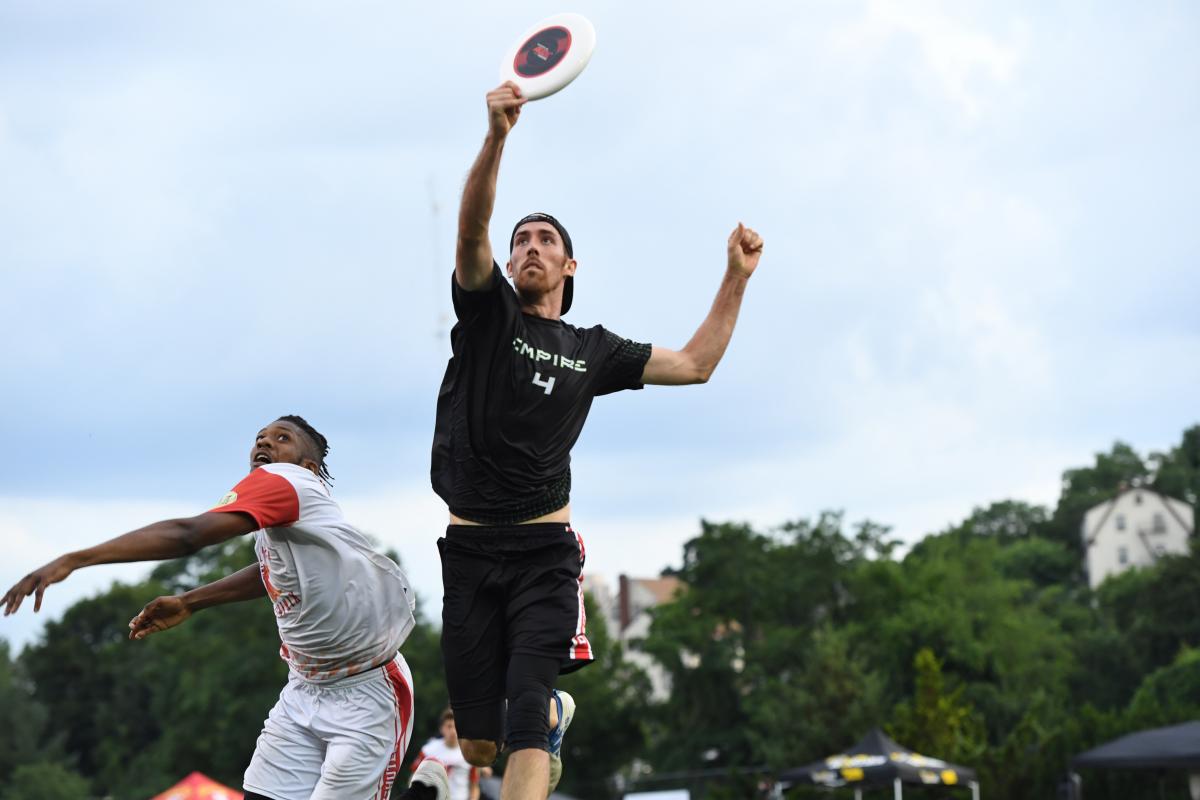 Ben Green, DC Breeze
A steady but relatively quiet defender through his first four AUDL games, the 26-year-old Green enjoyed his breakout performance on Saturday night in Atlanta, recording three blocks and two goals in the Breeze’s big road win. His first D came on the fourth point of the game, in which DC registered its first break to surge ahead 3-1. But his marquee sequence came early in the second, when he delivered two spectacular layout blocks against Atlanta’s Antoine Davis on the same point before sprinting deep and scoring the tumbling goal that gave the Breeze an 8-3 lead. DC never trailed for a single second and moved into first place in the Atlantic through six weeks with a scintillating 19-14 win over the Hustle.

Ben Jagt, New York Empire (pictured)
The former MVP erupted for +14 and matched his career high by scoring 10 goals against the Phoenix, though this double-digit onslaught was considerably more impressive than the 10-spot he put up seven years ago against Detroit as a member of the Minnesota Wind Chill. In that June of 2014 game against the Mechanix, Jagt only completed six passes and the Wind Chill scored 42 goals. On Friday night, however, Jagt went 29-for-30, with three assists and six hockey assists in the Empire’s 27-20 triumph. Furthermore, on a weekend when no player in the league registered a 300/300 game, Jagt came the closest, throwing for 298 yards while racking up 473 receiving, the latter being the largest total of Week 6. In fact, for the entire season, Detroit’s Andrew Sjogren is the only player in the league who’s tabulated a single-game performance with more receiving yards than Jagt had against Philly on Friday.

Victor Luo, Madison Radicals
When maintaining possession was of the utmost importance against Chicago’s comeback pressure, Luo’s poise and patience helped carry Madison to a potentially season-saving victory on Saturday night. The sure-handed lefty completed all 51 of his passes while leading the Radicals in throwing yards and total yards against the Union, who experienced defeat for the first time all season against Madison. Whereas the Rads’ O-line was broken six times a week earlier in Chicago, Luo and company cut that number in half in the rematch, a critical step in keeping their postseason hopes alive.

Jonny Malks, DC Breeze
He was not perfect on Saturday in Atlanta, but Malks’ dynamic arsenal of blading throws were instrumental in unlocking the Hustle defense and carrying the Breeze to their fifth consecutive win. Yes, he finished with a game-high 354 passing yards and completed 52 of his 54 attempts, but the numbers cannot truly capture how effective he was sneaking the disc through tight spaces and angling it over and around defenders to both fluster and flummox his opponent. As we discussed during the broadcast, his unique style sets him apart from his peers, and his high level of playmaking certainly puts him in the All-AUDL conversation at the midway point of the season.

Greg Martin, Philadelphia Phoenix
Philly’s top deep threat now leads the entire AUDL in goals following his 11-score weekend, in which the Phoenix registered a massive road win over Boston on the second night of a back-to-back. Martin led the Phoenix in receiving yards in both games, scoring seven goals with several impressive highlights in the loss at New York before adding four more clutch scores on Saturday in New England. If Martin and the Phoenix can knock off Atlanta in Philadelphia this Friday, Philly will be right back in the mix of the Atlantic Division playoff conversation.

Andrew Roy, Minnesota Wind Chill
What a weekend for the Wind Chill, and the rookie out of Carleton via Davidson had a huge hand in Minnesota’s pair of road victories! Roy completed 162-of-163 passes for 807 throwing yards in wins at Indy and Chicago that vaulted Minnesota into first place in the Central. His 86-throw, no-turnover masterpiece inside the AlleyCats atmosphere-free facility was impressive enough, but his 76-for-77 when playing outside amidst difficult, rainy conditions on Sunday in Chicago might have been even more significant, as the 22-year-old handler helped the Wind Chill reshape their divisional race. Through six weeks, Roy leads the league with 388 completions, an average of 64.7 per game. Among players who’ve played at least four games, he’s seventh in the league averaging 340 throwing yards per contest.

Nick Vogt, Minnesota Wind Chill
Seven goals, three assists, and three blocks for Vogt in his two-win weekend, in which he also went turnover-free against Indy and Chicago. He scored all seven of those goals on Saturday against Indy, including a Callahan on the third point of the game, before recording two assists and two blocks in the soggy Sunday battle. His buzzer-beating toss to Rocco Linehan gave Minnesota a 16-12 lead at the end of the third quarter against the Union, and the 25-year-old now leads the Wind Chill in plus/minus for the season at  +31, which is tied for fifth in the league.