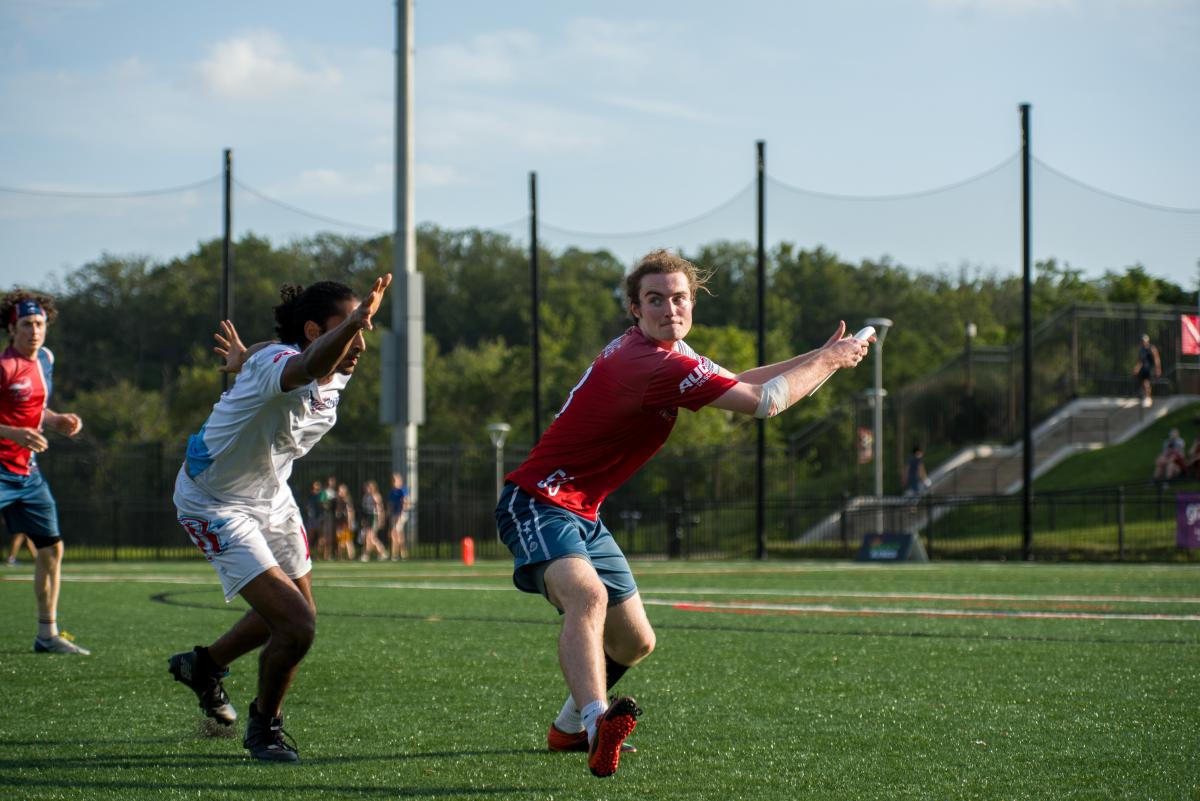 Travis Dunn, San Diego Growlers
Even though the Growlers had already clinched home-field in the West title game, Dunn looked far from complacent in his four-goal, four-assists, 40-for-40 passing performance against San Jose on Friday night. His 569 total yards were a season-high and a strong indication that Dunn may be playing his best ultimate of the season when it matters most. Next up for San Diego? A home date with Dallas this Saturday night, with the winner booking its ticket to the AUDL Final Four.

Ben Jagt, New York Empire
The final stat-line was staggering—nine goals, two assists, three blocks, 498 receiving yards—and it still seems relevant to mention that Jagt was having a pretty quiet first half until he scored his first goal just past the midway point of the second quarter. From then on, he scored nine of New York’s 14 goals as the Empire maintained their lead over Boston on Friday en route to a 25-21 victory. Still with one regular season game remaining, Jagt has already wrapped up the #1 spot in plus/minus (+82) and receiving yards (4,193). And with five goals this Sunday, Jagt would also secure the goal-scoring crown, as he currently sits four behind Detroit’s Andrew Sjogren and two shy of Philly’s Greg Martin.

Jonny Malks, DC Breeze (pictured)
It’s so tough to pick just one DC star, especially when the Breeze delivered such a dramatic and thrilling team-wide collective victory, the way they did on Saturday. Shout-outs to Rhys Bergeron and Luke Rehfuss for some insane defensive playmaking, and Rowan McDonnell perhaps looked as close to his 2018 MVP form as we’ve seen all year. But in a game when possession was precious, Malks went 52-for-52 and accumulated 511 yards. He also made a own spectacular layout grab and then quickly unfurled a huck to a skying AJ Merriman for one of the game’s top highlights.

Sean McDougall, Los Angeles Aviators
For a guy who pondered retiring from competitive ultimate during the pandemic, McDougall sure showcased that he’s got plenty of great ultimate left in the tank. He dished a season-high five assists in the Aviators’ exciting comeback win over San Jose, and he also added two goals, one block, and completed all 15 of his throws in LA’s 21-20 triumph. For the full season, the 31-year-old McDougall ranks 5th in plus/minus (+59) and is one of just eight players in the league to score at least 40 goals.

Ryan Osgar, New York Empire
Boston quite simply had no answer for Osgar, who recorded 744 total yards, split almost evenly between his throws (374) and his receptions (370). His yardage production was just the ninth 300/300 game in the AUDL all season, and Osgar had surpassed 300 in each category by the midway point of the fourth quarter. And then there was the fact that he also dished 10 assists, a career-high, and had four hockey-assists too. Osgar needs two assists in the Empire’s regular-season finale to seize the 2021 AUDL assists crown, assuming Tampa Bay’s Bobby Ley does not overtake him in the Cannons finale. Currently, Atlanta’s Austin Taylor has 55, Osgar has 54, and Ley has 46. Chicago’s Pawel Janas, who led the AUDL in assists in each of the past three seasons, finished the regular season with 50.

Austin Taylor, Atlanta Hustle
Speaking of the league’s current assists leader, Taylor authored another remarkable all-around performance on Saturday night against Pittsburgh, dishing for exactly half of the Hustle’s scores in their wild 26-25 double overtime victory. Clearly, his 732 yards throwing against the Thunderbirds three weeks prior was no fluke, as Taylor torched Pittsburgh for 798 in the air this time around, while also accumulating 304 receiving yards along the way. In double OT, Taylor hit Antoine Davis for the game-winner and his 13th assist of the night, two more than the next highest total that any player recorded in a game across the league all season!

Max Sheppard, Pittsburgh Thunderbirds
If not for Taylor’s heroics alongside those of his teammates like Davis, Matt Smith, and Tanner Robinson, Sheppard and his big-man target CJ Colicchio would have pulled off the impressive upset on Saturday night. And even in defeat, Sheppard and Colicchio deserve much acclaim. There’s no doubt it’s been a frustrating season for the Thunderbirds in the win-loss department, but Sheppard showcased his all-around excellence against the Hustle, accumulating eight assists, five goals, one block, 454 throwing yards, and 344 receiving yards. Colicchio added 10 goals, tied for the most by any player in a game all season, while also contributing three blocks and over 400 receiving yards. Unfortunately for Pittsburgh, the frustrating ending somewhat encapsulated their disappointing overall season, but Sheppard illustrated once again that he’s one of the top all-around playmakers in the AUDL.