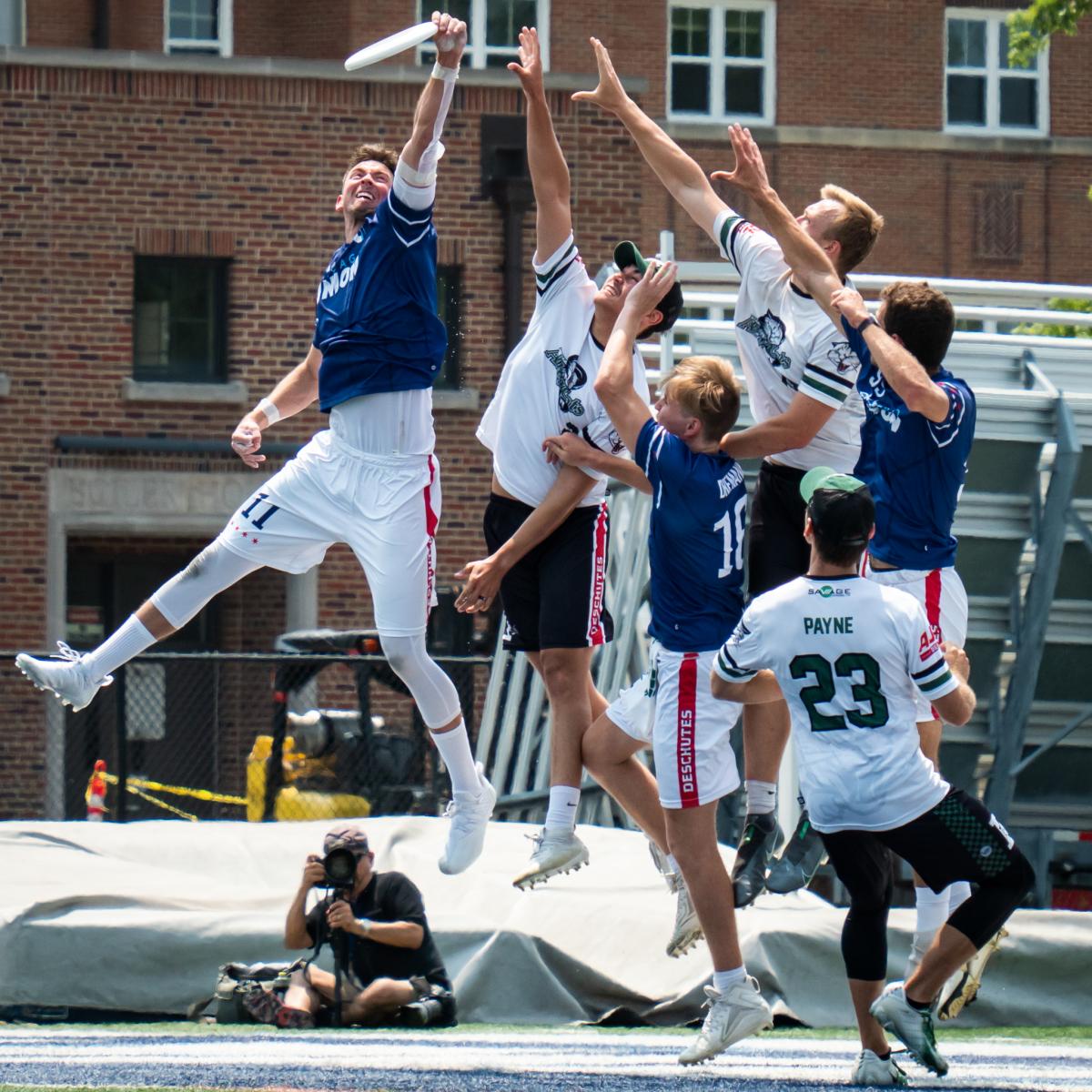 After playing primarily on the D-line for the first three years of his Madison Radicals career, Victor Luo made the switch to offense this season and has been an anchor in the Radicals backfield. He ranks second on the team in throwing yards (2,391), total yards (3,690), and assists (25), while leading the team in completions with 389 at a 97.3 percent rate. Of the top 20 league leaders in throwing yards, Luo boasts the second highest completion percentage; he showcases weekly an ability to consistently distribute high-percentage throws downfield while remaining a rock in the backfield. In his two games against Chicago this season, Luo has been nearly flawless—he’s completed 113-of-114 throws with 862 yards of offense and six scores. The Radicals will again need him to lead an efficient offense to help put up points against a Chicago defense allowing the fewest points per game in the league.

Both Chicago Union losses this season came when Nate Goff had his lowest yardage totals of the season: 57 total yards vs. Madison, and 24 total yards vs. Minnesota. He’s been held under 100 total yards each time Chicago has played Madison, and he’s totaled just one assist, one goal and one block in those games. On paper—and watching Goff’s highlights—it doesn’t seem like Madison should have an answer for the high-flying 6’4” Union defender running off of turnovers, but the Radicals have had more success than any other team containing him. The Chicago D-line as a whole struggled to find a rhythm three weeks ago in Madison—they converted a season-low three breaks—but this week D-line cogs Peter Graffy and Kurt Gibson are expected back in the lineup. With a full strength D-line able to better exploit mismatches, Goff should see plenty more opportunities to shine downfield.

Compared to the last two seasons, to say we’ve seen a significant role shift from Rowan McDonnell would be an understatement. Going from every-point, 10-score-per-game, dynamic hybrid to savvy, safe veteran handler who no longer gets downfield was an unexpected turn, but it’s hard to argue with the results; the 5-2 DC Breeze are in prime position to make a push for their first ever Championship Weekend appearance. Put simply, Rowan makes his teammates better. Guys like Jonny Malks, Gus Norrbom, and Zach Norrbom have repeatedly shined alongside Rowan this season, and he’s happy to give them the spotlight. He isn’t the drive finisher he once was, but with the talent around him, he doesn’t need to be. After two grueling games against the Atlanta Hustle zone—last game McDonnell was somehow held to just 63 throwing yards on 69 completions—the offense should have a much easier time progressing downfield against a Phoenix team averaging the second fewest takeaways per game. Expect a get-right game from Rowan and the O-line as they reestablish themselves as the premier offense in the Atlantic.

While they had their opportunities last week against Chicago, Brett Matzuka and the Minnesota Wind Chill D-line failed to convert multiple breaks for the first time all season. The play of the D-line offense has been the difference between winning and losing—the two Wind Chill losses have come in the two games where they’ve converted fewer than four breaks—and the counterattack starts with Matzuka. Brett is coming off his first scoreless game of the season, but he’s in a great spot to bounce back as the fourth place AlleyCats come to town for the Week 9 Game of the Week. He recorded a season-high +3 in Minnesota’s first game against Indy, completing all 28 of his throws with two assists and a block. Matzuka didn’t see many opportunities in the red zone a week ago, but with hopefully calmer conditions this week, he should be in position to throw multiple scores and get the D-line offense back on track.

Honestly, this is long overdue. Vinay Valsaraj has been a human highlight reel for the Austin Sol all season, almost guaranteed to make at least one gravity-defying layout per game. The height of the disc doesn’t seem to matter either; Valsaraj has gone full superman multiple times for chest-high layouts on both offense and defense. Standing at 6’3”, the AUDL rookie is one of those long, stridey downfield cutters that finds the end zone on a regular basis—he’s recorded at least two scores in all 10 games he’s played this season. Valsaraj currently ranks seventh in the league in receiving yards, with 2,039, and while his receiving prowess has been apparent all season, his athleticism loans itself well to earning the disc back after turnovers; he’s totaled eight blocks this season. Expect another impact game with multiple momentum-swinging plays this week in a must-win game vs. San Jose.

Paul Lally is expected to return to the San Diego Growlers lineup this week after missing the team’s Texas road trip this past weekend. His absence was certainly felt, as the team converted just 45.3 percent of their offensive possessions against Dallas and Austin; in games this season where Lally has played double digit O-points, the Growlers’ offensive conversion rate is 55.6 percent. Per game, Lally currently leads the team in completions and throwing yards, as he’s carved out a consistent role in his first year with San Diego. He brings a strong veteran presence to the Growlers backfield and has complemented Goose Helton well; he should slot back into his primary O-line handler role this week against Seattle.

Battling injuries and roster consistency all season, the Dallas Roughnecks have struggled to find an offensive identity for most of the year. Since switching to the Roughnecks O-line the past two games, Gabe Hernandez has proven himself as the missing piece, serving as the primary initiator in the Roughnecks backfield. Always available to facilitate motion, Hernandez completed 149-of-151 throws (98.7 percent) with five assists and six hockey assists in wins over San Jose and San Diego. In this week’s Tuesday Toss, Kyle Henke was quoted saying, “You gotta move horizontally to move vertically...we just hadn’t been able to execute it until Gabe took hold. I think Dalton [Smith] was that guy, but we needed someone else.” With Dalton on the verge of coming back from injury, it will be worth watching whether Hernandez remains in that primary distributor role, or if he’s paired with Smith to revive the dominant give-and-go offense we saw down the stretch in 2019. The Roughnecks are 3-0 this season in games where Hernandez plays 70 percent or more of his points on offense; look for an improvement to 4-0 if his role stays the same on Sunday.