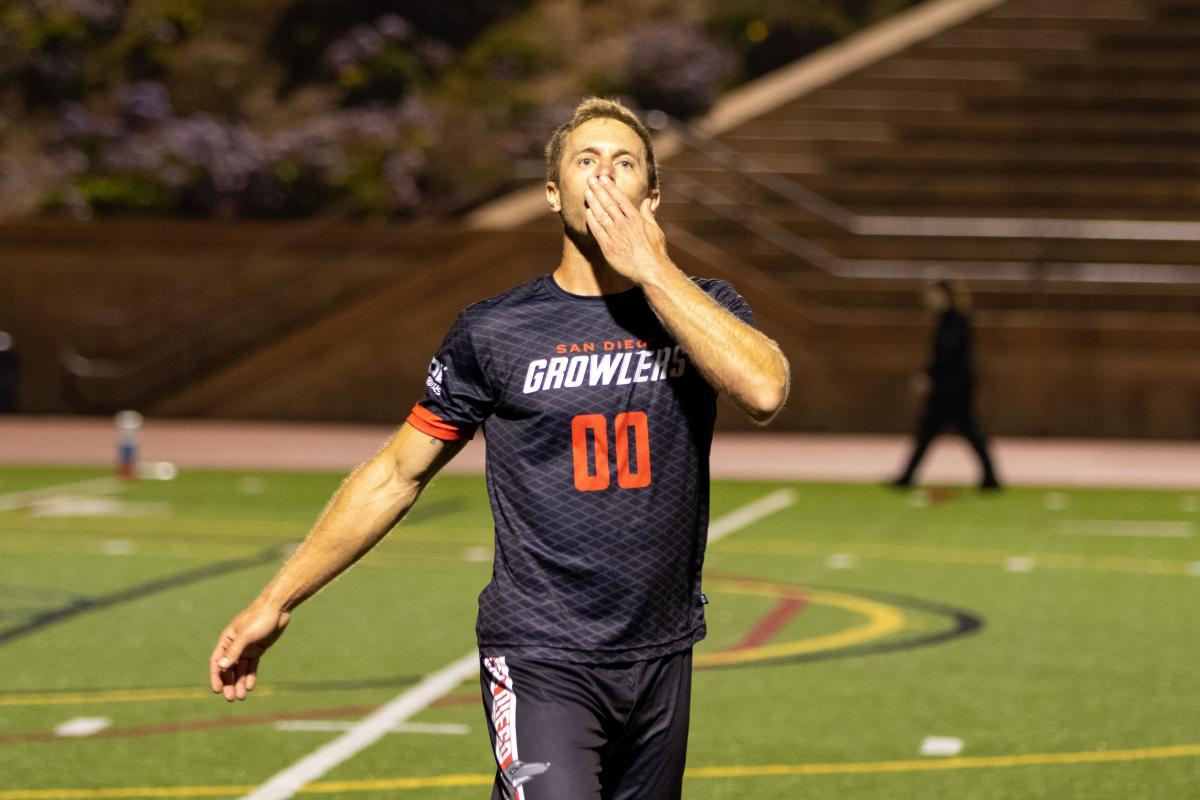 Jonathan Helton is coming off his highest scoring output of the season, as he totaled five assists and three goals in last week’s one-goal win over Austin. Getting downfield slightly less this year than year’s past, Goose has settled into a primary backfield role in the San Diego Growlers offense; his 1,361 throwing yards lead the team, and his 21 assists rank second. While he still picks his spots to slip out downfield, it’s his throws that have shined this year for the Growlers, launching hucks to dynamic downfield targets in Jesse Cohen, Travis Dunn, and Lior Givol. Goose beats his marks regularly with a full arsenal of throws and has a nose for the end zone when the offense is in striking distance. This week he and the Growlers travel down to Texas for the first time as a team to take on the seventh and sixth ranked defenses, respectively, in Dallas and Austin.

The Ottawa Outlaws 2019 All-Star is back for his sixth season, as the Canada Cup begins with an Outlaws double header weekend. Alec Arsenault has scored 40-plus goals and thrown 20-plus assists in three consecutive seasons as the Outlaws’ primary downfield receiver, and he’s seen more and more involvement in the offense each year of his career. Most recently in 2019 he finished with a career-high 190 completions, as he’s gradually transformed from a one-dimensional deep threat into more of a downfield hybrid. On a young team—the Outlaws have 13 rookies this season—and without longtime offensive staples Karl Loiseau and Derek Alexander, Arsenault’s touches should continue to increase this season as the go-to veteran on the O-line.

Andrew Carroll has been a defining piece of the Toronto Rush O-line since 2017. The speedy sixth-year vet can get open downfield at will, timing his cuts to consistently get chunk gains within the flow of the offense. As a thrower, he’s developed a strong flick huck and is willing to launch the disc off set plays, following precise initiating cuts. Surpassing the 100-assist, 100-goal mark last season for his career, he’ll look to build on his all-around offensive success as the Rush travel to Ottawa this Saturday for the first game of the Canada Cup. In three games against the Outlaws in 2019, Carroll totaled seven assists, seven goals, and three blocks.

Drew Swanson is gunning for the single-season blocks per game record. After adding six more blocks to his season total in his last game against Minnesota, Swanson’s averaging a ridiculous 3.4 per game for the Chicago Union—the current record is 3.3 set by his now-teammate Peter Graffy in 2015. Swanson almost single-handedly kept the Union in the game against Minnesota two weeks ago with four blocks in the second half, repeatedly flying into throwing lanes whether or not the disc was intended for his matchup. He gave the Wind Chill offense fits all game, and Chicago will need another dominant performance if they’re going to retake first place. Swanson has been the best defender in the league this year when it comes to generating turnovers, and with a favorable history against the Wind Chill—he delivered the game-clinching block in his first game of 2019 in Minnesota—Swanson will look to continue his pursuit of an AUDL record.

Known heading into this season as Minnesota’s offensive juggernaut,  Bryan Vohnoutka has been every bit as impactful since switching over to a primary D-line role in Week 3. Quickly establishing himself as a lockdown defender, Vohnoutka drew the bulk of the Pawel Janas matchup two weeks ago and held the league’s assist leader to just one assist and one goal; never in Janas’ career had he been held to just one assist in a game where he played at least 10 points. B-Von excels at using his body to dictate his matchup, then accelerating to close fast and pressure every throw. With teammate Brett Matzuka leading the counterattack, Vohnoutka is well set up to punch in break scores on a defense that has had little trouble generating turnovers.

The deepest defender in Atlanta’s renowned zone, Brett Hulsmeyer has been making plays all season for the Hustle defense. The rangey ballhawk leads the league in blocks with 18 in seven games, including four games with three-plus blocks—he’s already surpassed his rookie total of 12 takeaways in 2019. At 6’5”, Hulsmeyer uses his size to take away anything that floats deep; even in matchup defense, he regularly peels off his man to help in the deep space. His vision and awareness also allow him to jump underneath cuts, coming down like a strong safety to wreak havoc in the intermediate level of the zone. This week he may see a lot of Ben Jagt when the Hustle switch into matchup defense (fingers crossed)—undeniably would be the number one big vs. big matchup this week. If he can limit Jagt’s deep cuts, it’s Atlanta’s game to lose.

It’s new territory for the New York Empire this week, as they face the Atlanta Hustle zone for the first time in franchise history. Whether he plays offense or defense—he’ll likely split time fairly evenly—Ben Katz is in a spot to be the difference maker for New York. The Empire’s success against the Hustle zone will come down to their ability to find holes and break down the defense within small spaces, which suits Katz’s cutting ability more than most. Sure to have a 99 awareness rating when AUDL 2022 finally comes out, Katz shines when the Empire O opts for a more possession-based attack, using his quickness to attack and clear space in rhythm. He knows where the weak points are in any defense and rarely makes the ‘wrong’ cut, slotting in seamlessly at any level of the field. Katz’s defensive instincts should help slow down an aggressive Hustle offense, and as a prototypical Swiss Army Knife, he’s the ideal guy to lead a counterattack.