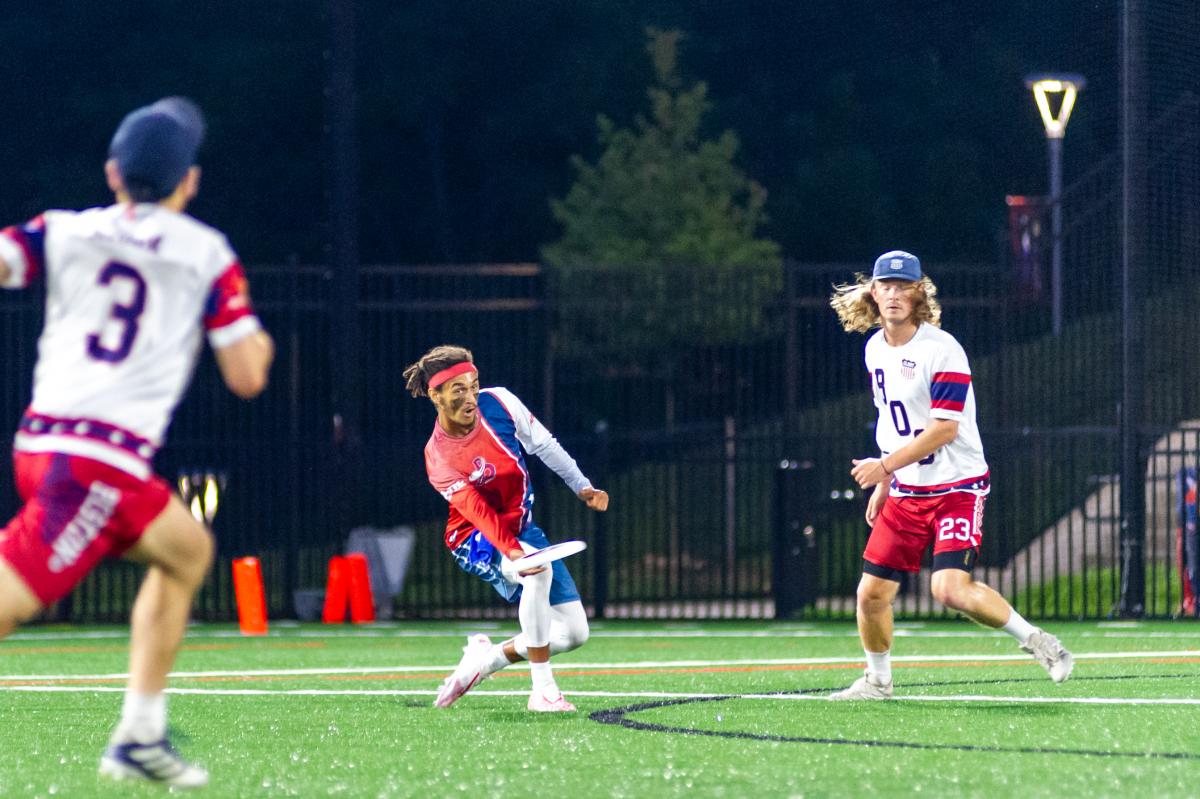 AJ Merriman’s offseason work ethic and relentless pursuit of ultimate greatness has paid off in a big way for the 3-1 DC Breeze. While he’s registered just 28 offensive touches, Merriman has dominated on the Breeze D-line to the tune of six goals, eight assists, and seven blocks through the first four weeks. He’s completing over 95 percent of his throws—up from 83.8 percent in 2019—and has racked up 736 yards of offense, averaging an explosive 26.3 yards per touch. Merriman, who just turned 21 years old, is energizing this defense week in and week out with countless big plays on both sides of the ball, and the team will undoubtedly need his playmaking this week as they look to finally take down the undefeated New York Empire; Merriman’s first game as a pro kicked off the Empire’s now 18-game win streak. Coming off his best game of the season against Boston, look for Merriman and DC to start fast out of the gate in the most anticipated game of Week 5.

The leader of the Empire defense will have his work cut out for him this week, as Jeff Babbitt attempts to slow down the hottest offense in the league. DC has scored on a league-leading 86 percent of their offensive points, although they had their lowest scoring output of the season back in Week 1 in the first game against New York. Babbitt finished without a block in their first meeting, and while he’s looked strong on offense with three goals in every game to this point, Babbitt has now failed to record a block in two of three games to start the season. In what is safe to assume will be a close game—DC has lost to New York by exactly one goal each of their last three meetings—Babbitt is going to be needed down the stretch for his signature game-clinching plays, whether on offense or defense. Only twice in Babbitt’s 56-game career has he failed to record a block in back-to-back games; he’ll have to make the most of his opportunities on Friday against a hyper-efficient small ball offense.

More Pat. One of several—almost too many—big free agent additions for the Chicago Union this past offseason, Pat Shriwise has played in just two of Chicago’s first four games to start the season. In 26 points played on the year, Shriwise has looked every bit as efficient as he was on the Madison Radicals O-line the first seven years of his career. He’s completing a career-high 98.1 percent of his throws and has carved out a primary role as an O-line handler. His elite vision allows him to facilitate the offense from the backfield or fill in open cutting lanes, and it feels like he’s good for at least one possession-saving layout per game. He’s totaled over 650 total yards through two games and should stay busy this week as the guy with more experience against Radicals zone than anyone else on the roster. Like Keegan North last week against the AlleyCats (six assists, 521 total yards), expect Shriwise to show his former team what they’ve been missing.

One of the most notable and fearsome defenders on the Radicals since 2017, Sterling Knoche has unlocked a new dimension in year 4 as an offensive finisher. Last weekend for the first time in his career, Knoche played more O-points than D-points, jogging out to receive the pull on 17 of his 19 points. He’s already bested his single-season high with 39 offensive points played this year, and he’s averaging 3.8 goals per game, up from his career average of 1.7 coming entering 2021. His trajectory will be worth watching, as he’s following a similar path to Peter Graffy, who emerged as the Radicals’ most dynamic offensive threat in 2018 after spending four years racking up blocks for the defense. With 12 goals in his last two games, look for the elite athlete to continue mixing in with the O-line this weekend in two tough games at Chicago and Indy.

Austin Sol rookie Hayden Stone has made an immediate name for himself as a go-to O-line cutter on what’s been a surprisingly consistent Sol offense through the first four weeks of the season. Stone leads the team in receiving yards—averaging over 200 per game—and has shown a veteran poise with the disc in his hands, completing 94.9 percent of his throws. He brings a versatile cutting skill set to the offense, able to initiate downfield and continue the disc in rhythm, working off his teammates. He sees the field well and has already made several highlight-reel plays this year, showcasing his athleticism on full extension layouts and posterizing skies. The 6’3” playmaker draws a natural comparison to former Sol hybrid Kyle Henke, who saw his role expand throughout his time in Austin. An every-week X-factor on an exciting Sol offense, Stone should continue making plays this week in a big home rematch vs. Seattle.

Cam Brock is back. After announcing his retirement last year, Brock just couldn’t stay away from the game and league he loves most; when he suits up on Saturday he’ll regain his spot—alongside teammate Travis Carpenter—among just two active players that have played every AUDL season with the same team. Brock’s career accomplishments speak for themselves: 504 goals, 734 total scores (goals plus assists), 120 games, and +570 plus/minus all rank number one in AUDL history. While he may not be the same player he was earlier in his career—he “took a step back” in 2019 with “only” (these are air quotes) 41 goals—he’s still going to contribute on offense and at the very least assumes an immediate leadership role among the new generation of AlleyCats. Struggling to keep pace with the rest of the division with their only wins this season coming against Detroit, the return of an AUDL legend could be just what the ‘Cats need to spark a winning streak.

After becoming a mainstay on the Dallas Roughnecks D-line in the 2019 playoffs, Jay Froude has resumed his role as a facilitating hybrid for the Roughnecks offense and is off to a fast start in 2021. Froude leads the teams in goals and total scores heading into Week 5, and he’s averaging over 350 total yards per game. A dynamic athlete, Froude has routinely found separation running down hucks this season and has been equally willing to work with handlers to move the disc in smaller spaces. And while he has the ability to unload huge lefty backhands, Froude has been choosier with his shots this year; his decision-making has been rewarded with the lowest turnover numbers of his career, with just two throwaways on 73 throws (97.3 percent). He was a perfect 48-of-48 throwing this past weekend in SoCal and is still putting up similar scoring numbers to what we’ve seen from him in recent years. He’ll look to properly welcome the Seattle Cascades to Texas this week as they match up in Dallas for the first time in franchise history.