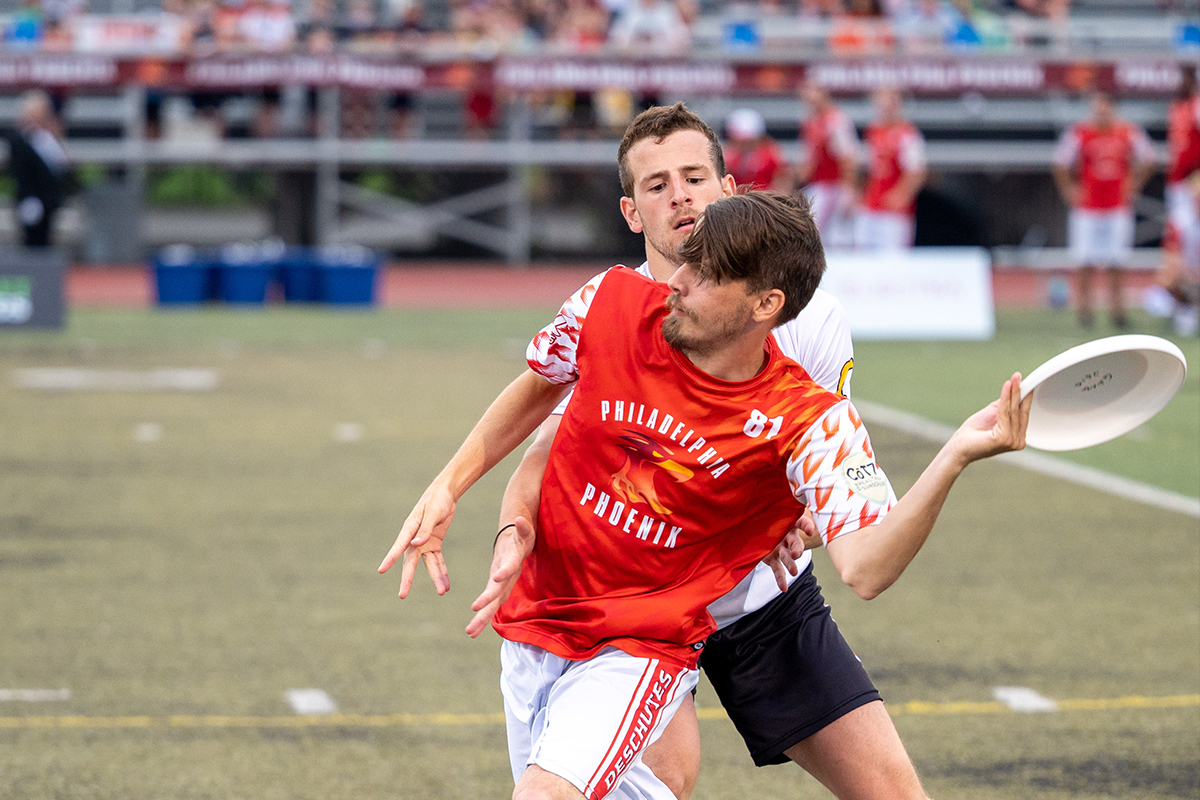 On Saturday, Keegan North heads back to his old stomping grounds in Indianapolis for the first time this season, as the Chicago Union take on the AlleyCats. North was one of the top players on the ‘Cats O-line in 2018 and 2019, totaling over 60 scores each of his two seasons in Indy before signing with the Union this past offseason. In two non-competitive games playing with the top end of a loaded Union roster, North really hasn’t had to do much for Chicago this season, but even still has put up four assists and four goals in 29 points played. He’s going to quietly put up numbers all season, poetically reflective of his effortless, gliding-around-the-field style of play. Depending on how well Chicago travels to non-Michigan cities, North may take on more of a featured role in a rematch against his former squad.

2 Klainz is back. Josh Klane will be on the 20-man Minnesota Wind Chill roster for the first time this season, with the team likely using a Detroit game to ease him back into action without giving him a full workload. Klane has amassed 186 assists since 2017, the third most in the league behind Chicago’s Pawel Janas and Seattle’s Mark Burton. He’s a pure shooter with the ability to take over games and has been the face of the Wind Chill offense for the past three seasons. Normally I hesitate to put a player playing against Detroit in this Players to Watch column, but Klane has been recovering from offseason shoulder surgery, and his throws will absolutely be worth a look in his first game back. Saturday should also shed light on how this backfield is going to look with Klane in the rotation; rookies Andrew Roy and Will Brandt alongside Tony Poletto have done an incredible job holding down the fort in his absence.

Calvin Brown has come out firing in 2021, building on a solid 2019 rookie campaign where he totaled 22 scores and recorded three blocks in six games. With a relatively depleted roster from years past, Calvin has taken it upon himself to facilitate the Los Angeles Aviators offense, averaging over 50 completions (up from 25.3 in 2019) and 4.5 assists per contest. The 20-year-old is in clear command of the offense and has an incredibly high ceiling, but—to quote the late Uncle Ben, specifically the one from “Spider-man” (2002) a.k.a. the best Spiderman movie released this century—with great power, comes great responsibility. Brown has seen his completion percentage dip from 95.6 percent in 2019 to 88.1 percent thus far in 2021, already exceeding his total throwaways from last season. He and the rest of the Aviators offense are going to have to take care of the disc in a big rematch vs. Dallas; if Brown can limit turnovers while maintaining the confidence and aggressiveness to get the disc downfield, LA could be in position for a shocking upset.

The Philadelphia Phoenix are undefeated through the first three weeks of the season, but the only teams they’ve faced are the bottom two teams in the division.  That’ll change this week with a doozy of a double-header road trip: Raleigh on Friday night, followed by Atlanta on Saturday. In two tough matchups, there’s no better player for the Phoenix to lean on than 2019 All-Star Sean Mott. The best all-around player on the team and one of the most dangerous hybrids in the league, Mott has totaled 1,194 yards of offense with nine assists and four goals to start the season. Reminder: he’s only played two games. Mott has quietly become a dark horse MVP candidate; if Philly is able to stay near the top of the Atlantic Division standings—and this road trip will be very telling on how big of an “if” that is—Mott will be the main reason why. With his backfield counterpart Alex Thorne expected to miss his second straight game, look for the Phoenix to continue leaning on Mott to move the offense throughout the weekend.

Josh “Cricket” Markette is set to make his AUDL debut this week in front of the Boston home crowd. Cricket has had a storied ultimate career in the club division, having won multiple national titles with over 20 years of experience under his belt. In 2015, he was named MLU’s Eastern Conference Offensive Player of the Year and won a title with the Boston Whitecaps. Markette is a strong handler with some of the most polished throws in the game, and with Ben Sadok not expected to play this week, he should slot in immediately as a primary option in the Glory backfield. The offense has looked somewhat inconsistent through the first three weeks of the season; adding a steadying presence like Markette to the mix could be exactly what the team needs to turn around their weird three-game losing streak.

Update: Ben Sadok is on the 20-man roster for Week 4, but fellow handler Ian Engler is not. So, point still stands.

Through three games in 2021, Eric Taylor has already doubled his plus/minus rating from a season ago, which he recorded in eight games. He’s always had the talent, but it’s the usage and confidence that is maximizing Taylor’s impact this season. Going from reliable distributor to downfield initiator with throws has opened up this Flyers offense, as they’ve fielded the fourth most efficient unit in the league to this point. He’s playing with a new swagger this year, taking shots he wouldn’t have taken in 2019, looking for those deep cuts, and being aggressive in the red zone. Of his 448 completions in 2019, 5.6 percent of them went for assists; that number has sky-rocketed to 15.7 percent this season. And he’s still completing the exact same percentage of throws (a ridiculous 96.2 percent). Taylor’s going to continue to pilot the Flyers this week against Philly as they look to hand the Phoenix their first loss.

Probably the biggest name addition of the offseason for the Austin Sol, Joe Sefton has been integral to the offense’s success and 2-0 start. The 35-year-old last played in the AUDL in 2016, appearing in just four regular season games for the Seattle Cascades. Moving to Austin this past offseason and joining the Sol, Sefton has been revitalized in a big way as a centerpiece O-line hybrid. Through two games, he’s tied for the team lead in assists and is third on the team in completions with 54. He’s delivered in clutch moments in each game this season; Sefton threw the defining fourth-quarter goal against Dallas to a streaking Vinay Valsaraj (and yes was sort of bailed out, but an assist is an assist), then got free for the game-tying goal this past weekend to force overtime against LA. This weekend Sefton faces off against his former team, and with the Sol reportedly without captain Evan Swiatek this weekend, expect Sefton to fuel this offense in both games.