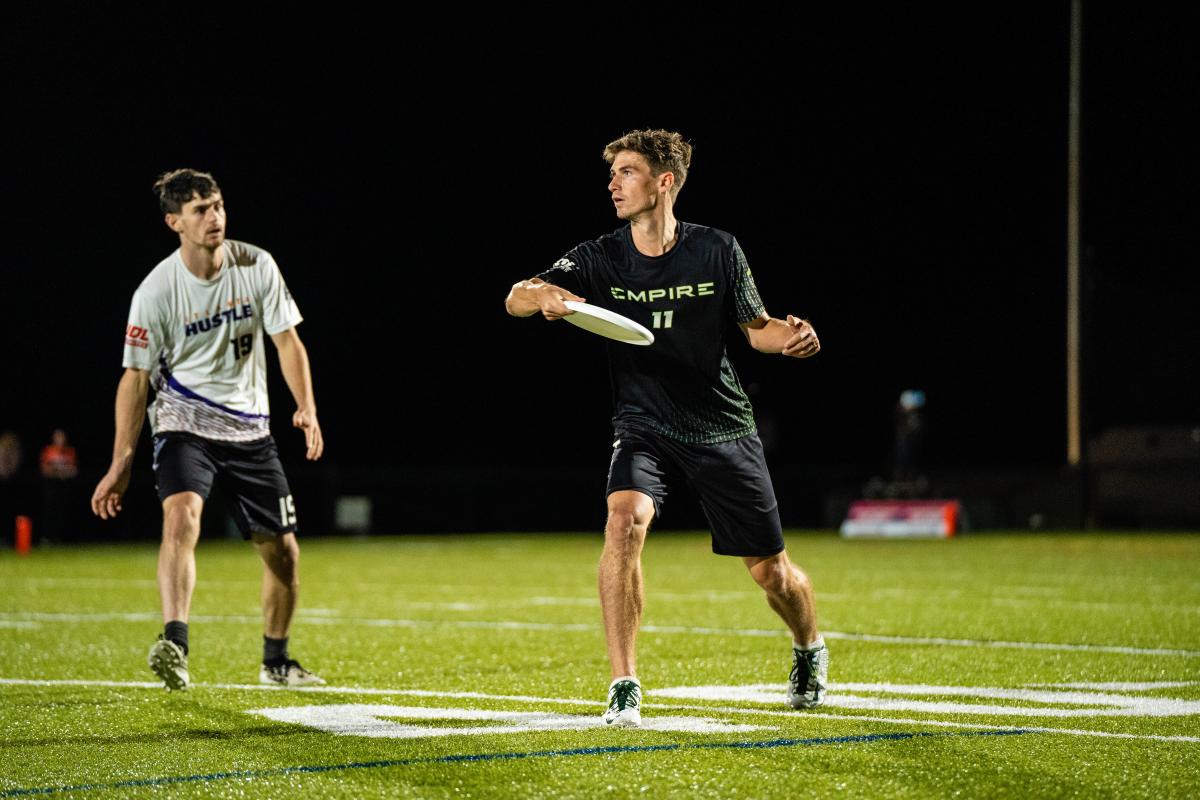 Expanding the list to eight this week for a special Championship Weekend edition.

With their season on the line, Cam Harris went off in Toronto’s win last weekend over Ottawa. The game was essentially a playoff game, with the winner advancing to the Canada Cup Championship Game, and Harris put the team on his back to come out on top. He became the third player this season to finish with over 1,000 total yards of offense in a single game, and the truly remarkable stat is he did it on just 31 completions; the two other occurrences each required 60-plus completions. Averaging 30 yards per touch, Harris was launching the disc relentlessly against the Outlaws defense, maximizing his midfield striker role as the go-to shooter on the Toronto O-line—all eight of his assists qualified as hucks, each score going for 40-plus yards. Even now in his early 30s, Harris has proven he can still be the primary driver of this offense, and being one of few current Rush players with extensive big-game experience, he’ll look to lead the young team to a Canada Cup title.

In an offense loaded with throwing talent, second-year Montreal Royal handler Jakob Brissette has consistently stood out this season as one of the most dynamic throwers on the line. Just 21-years-old, he’s looked about as natural a distributor as they come, possessing the throwing arsenal and patience to pick apart opposing defenses on a weekly basis. And now he’s apparently ambidextrous too?? He’s fearless in the red zone, with six-plus scores in each of his last three games, and he’s underratedly done a great job earning the disc back after turnovers, maintaining intensity on the defensive side to the tune of eight blocks this year. Brissette is coming off his best all-around game of the season, totaling seven assists, two goals, and three blocks in the Royal win over the Rush. He hasn’t had fewer than four assists in any game against Toronto this year, and should continue to be an offensive focal point in tonight’s championship.

Is it safe to call him the 2021 MVP yet? Ben Jagt made a strong case for becoming the third two-time MVP award winner in AUDL history last weekend against Atlanta, tallying eight total scores for the sixth time in his last nine games and adding a game-saving block at the end of regulation. His highlights continued into overtime, where he snagged an extremely difficult trailing-edge catch on an end zone layout to convert a critical break in the extra period, ultimately fueling New York’s one-goal win. Two SportsCenter-worthy plays to finish the game and keep the Empire’s championship repeat hopes alive, and they arguably weren’t even the most impressive part of his game: Jagt finished with zero turnovers on a perfect 20-of-20 throwing day for the first time in 2021. He will be on playoff record watch this weekend; he needs six goals to surpass Beau Kittredge for most goals in the postseason, and at least seven assists to catch Jonathan “Goose” Helton’s 42-assist postseason record.

While he doesn’t put up the same numbers as his king, Jack Williams has been every bit as essential to the Empire’s offensive success this season. Williams played a career-high, and team-high, 39 points in New York’s overtime win, missing a total of just two points after halftime. The result was a season-best 733 total yards, including 600 throwing yards on 67-of-69 completions; Williams accounted for over 31 percent of all Empire throwing yards, with no other player accounting for more than 18 percent. Whenever the Empire have needed to lean on a single guy in crunch time, Williams has been that guy all year. Down 12-7 with your primary handler struggling? Let Jack take over. Need a 70-yard buzzer beater huck to win the game in overtime? Jack is your man. He has consistently shown to be one of the most clutch players in the league, and his workload against Atlanta emphasizes the amount of trust this team has in him. He completed 80-of-81 throws with 10 assists at Championship Weekend in 2019; watch him ball out this weekend for the second season in a row.

AUDL legend Goose Helton added to his incredible legacy two weeks ago against Dallas, tossing his 359th assist (which was an absolute dime, by the way) to become the league’s all-time assist leader. He currently stands as the only player in AUDL history to rank top 10 all-time in goals, assists, and blocks, and he’s still playing at a high level in his ninth season. Perhaps more notably than his assist record, Helton played the best playoff game of his career against Dallas, totaling nine scores—his most in a playoff game ever—and completing a perfect 25-of-25 throws. It was his first zero-turnover game of the season, and his 535 total yards in the game also marked a season high. Goose simply couldn’t be stopped, working as a consistent cog within the star-powered San Diego Growlers offense; he surpassed 250 throwing and receiving yards in the same game for the first time all season. The game was a reminder of what Helton can do when he’s in rhythm, and that will be key heading into his second Championship Weekend game with the Growlers; he had four throwaways in the 2019 semis against Dallas.

The Flyers’ best all-around player was integral in Raleigh’s playoff win over DC, playing a near even split of O and D-points without turning the disc over. Eric Taylor finished with three scores, a block, and nearly 300 yards of offense on a perfect 19-of-19 throwing day, propelling the Flyers to comeback from an early 8-4 deficit. Head Coach Mike DeNardis maximized Taylor’s usage for the second time this season and the result was the same: In Week 11, he played eight O-points and 10 D-points en route to a 20-18 comeback win over Atlanta. With all the tools to take away opposing threats and then run the counterattack himself, Taylor’s versatility unlocks a new dimension to the Flyers D-line, and with the 14 career games playing predominantly offense, he’s still able to reliably switch over to slot into the most efficient offense in the league. He’ll likely be called on to help limit Chicago’s offensive firepower, but should remain a critical piece of the Flyers O-line and will continue to play plenty of points on both sides.

You can slow him down, but you can’t really stop him. Pawel Janas takes the field at Championship Weekend for the first time, as the Chicago Union get ready to face their toughest test of the season in a semifinal battle against Raleigh. Janas has completed a career-best 97.2 percent of his throws this season, averaging 4.6 assists and over 550 total yards of offense per game. He’s had five-plus scores in every game this season except the two Union losses, though he still racked up over 900 yards of offense with just a single throwaway in those games. The Flyers defense did an incredible job locking up Breeze handlers in their 19-16 playoff win, with the collective quickness, instincts, and athleticism to pressure the backfield throughout the game. The team’s success is dependent on Pawel’s; if he can prevail through the Flyers’ handler pressure and work his magic in the red zone, Chicago will have a great shot at advancing to the finals.

A Growler since the beginning, Travis Dunn is one of just three players to have played every season with San Diego since their inception in 2015. The team has slowly molded around their all-star hybrid, with their mix of homegrown talent and out-of-town stars leveling-up this team over the past two seasons. The heart of this team, Dunn has been a huge playoff performer over the last three seasons; in four career playoff games, he has 29 total scores (7.25 per game), two blocks, and is completing 96 percent of his throws. Frequently needing to put the team on his back in years past, Dunn now has the luxury of playing alongside the strongest supporting cast in Growlers history, headlined by the recent—and apparently seamless—addition of 2017 MVP Jonathan Nethercutt. With Nutt, Goose, and the rest of the O-line more than capable of carrying their own weight, Dunn’s able to thrive as a true free-flowing hybrid, often initiating from downfield as he looks to find the end zone with either his legs or his throws. San Diego is peaking at the right time; look for Dunn to keep the offense going, as they look to build on their best game of the season.