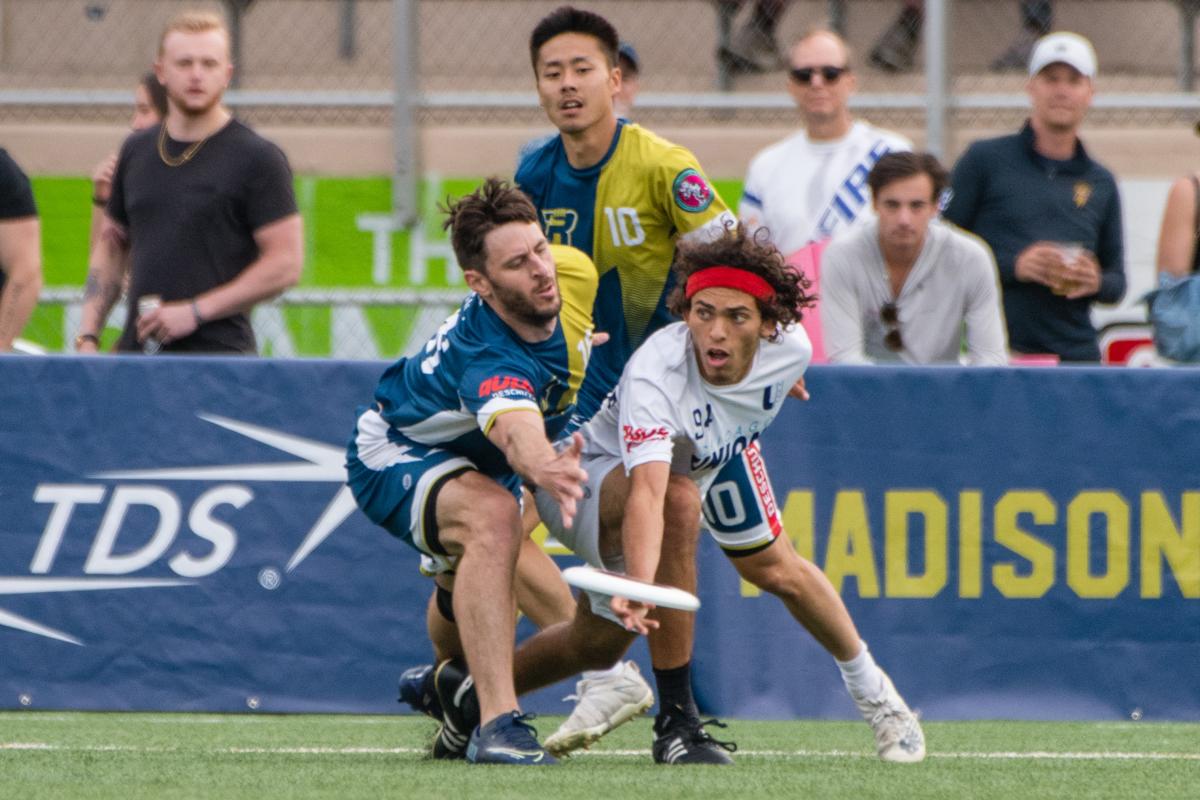 Watch live and for free starting at 8:00 PM/ET on DraftKings YouTube or Twitch streaming channels.

With their season on the line, the Madison Radicals host the Chicago Union tonight at Breese Stevens Field. It’s the two teams’ third and final meeting of the regular season after splitting the previous two meetings 1-1—both games decided by exactly three goals.

While they technically won’t be mathematically eliminated from the playoffs if they lose, the Radicals will likely need fairly decisive wins against Chicago and Minnesota if they intend on making the postseason. Every goal will matter in this game, and Madison will look for steady contributions from Logan Pruess, Victor Luo, and Rami Paust to facilitate an efficient offense. The trio currently ranks one, two, and three, respectively, on the team in throwing yards as the only three players to have surpassed the 2,000-yard milestone. Backed by the numbers, the Radicals offense runs through these three initiators who have combined for 64 assists and 26 goals this season.

The O-line core will look to get the offense back on track following the Radicals’ worst offensive game of the season, where the team converted on just 40.9 percent of their offensive possessions against Indianapolis in Week 7. They failed to complete a single huck, something they could struggle with again, as Chicago has held them to just five completed hucks in the two previous meetings combined. Of the three, Paust is the most likely to shoot deep, and he’s proven to be as dangerous a thrower as any when he’s in rhythm.

The Radicals offense will have its work cut out for them against a Chicago team allowing the fewest points per game in the league (16.8), but on the other side the Madison defense is once again among the best in the league. They’re currently tied for first in defensive efficiency, and they’re allowing just 18.3 points per game, the seventh lowest average in the league. On the strength of their zone defense led by franchise staples Kevin “KPS” Pettit-Scantling, Sterling Knoche, and Andrew Meshnick, Madison held Chicago to their lowest scoring total of the season in their last meeting, with the Union managing just 16 points. The zone does a great job slowing down the high-powered offense, forcing them to throw more and work that much harder for every goal. With an electric home crowd, any forced turnovers create a domino effect—the zone gets seemingly stronger the more the crowd and the team get fired up.

For Chicago’s offense, they’ll need their best thrower to get going early. Three-time reigning AUDL assists leader Pawel Janas threw just two assists in the teams’ last meeting in Madison, and he disappeared for stretches when drawing the KPS matchup. With a star-studded O-line featuring former Radicals Pat Shriwise and Ross Barker playing alongside Keegan North, Janas was content to push downfield and instead allow his O-line counterparts to facilitate disc movement. But the offense just fell flat too often, as the three combined for four dropped passes and none possessed the same urgency and aggressiveness as Janas to tear through the zone. Getting open on KPS is never easy, but staying in the backfield where he’s needed most will allow Pawel to bring the offense optimal success.

As much as the offense struggled with unforced errors in Week 6, the Union defense couldn’t get anything going off turnovers. They undoubtedly felt the absences of Jeff Robinson, Kurt Gibson, and Peter Graffy; all three serve as primary initiators on the counterattack when active. This week both Robinson and Graffy are expected to play, bringing much-needed firepower to a D-line offense that converted just three of nine breaks in that Week 6 game, their fewest of the season. Additionally, Robinson’s pulling ability—perhaps an underappreciated facet of the game—gives their defense a much better chance at success, as they’ll look to pressure the young Radicals O-line early and often.

Defense wins games, and I’d expect it to be no different in this week’s Central Division clash. It’s a must-win game for Madison, and for Chicago, a win essentially guarantees a playoff spot (still would need to beat Detroit). With revenge on their minds, Union have their sights set on the postseason for their second trip to the “Capital City Of Ultimate”.