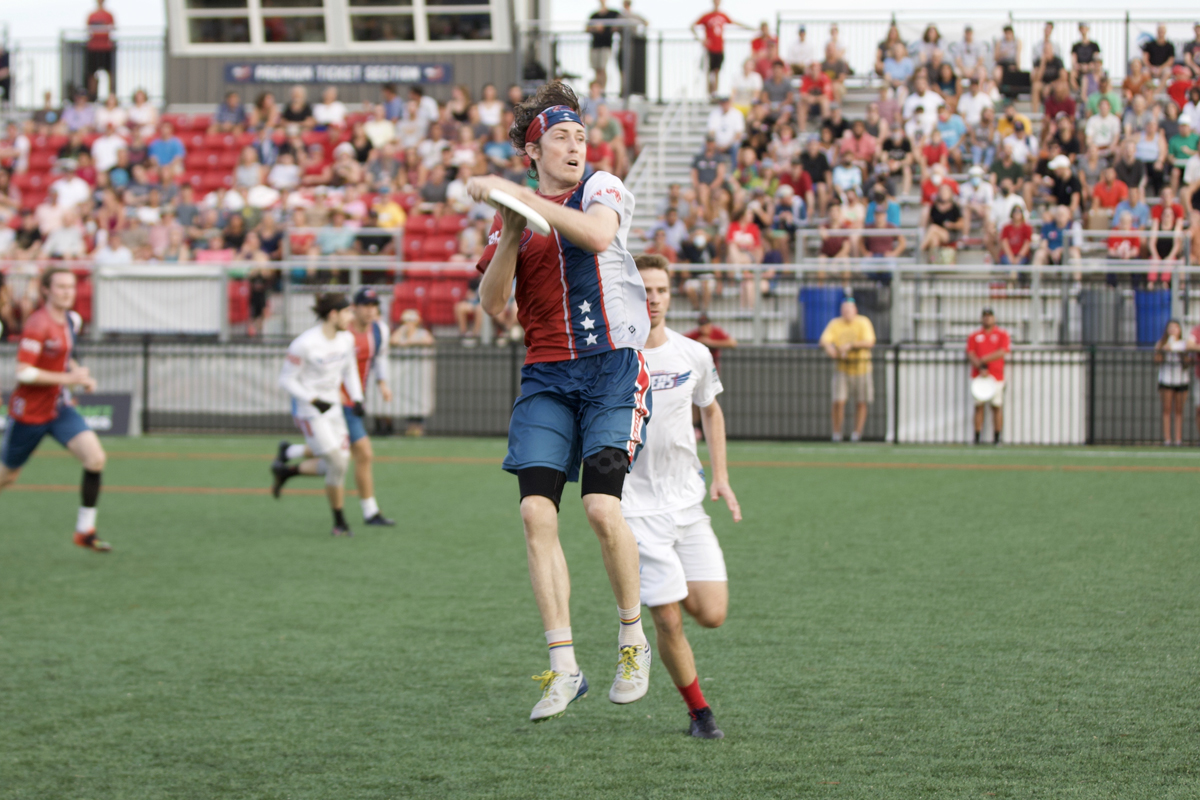 Watch live and for free starting at 7:30 PM/ET on DraftKings YouTube or Twitch streaming channels.

The first game of the Atlantic Division playoffs features the Raleigh Flyers and DC Breeze, two teams that have never had a meeting decided by more than two goals. The Flyers will be looking to make it back to their first Championship Weekend since their inaugural 2015 season, while the Breeze hope to carry home field advantage into what would be their first ever Championship Weekend appearance.

Tonight’s game pits the top two offenses in the league against each other—the Flyers and Breeze are currently tied for first in the league in offensive efficiency. Both teams are completing more than 95 percent of their throws for the season and average over 22 points per game, both top three in the league.

Fans can only hope for a game as good as they got the last time these two teams met just two weeks ago. The Flyers’ regular season concluded with a trip to DC to take on the Breeze in Week 12, coming off a comeback win over Atlanta the week before where they closed the game on a 9-2 run. Predictably, it was a back-and-forth battle throughout—something the Flyers and Breeze have never not done—and the game went to overtime on a narrow Flyers miss in the back of the end zone. With seven seconds left in a tie game in the overtime period, Breeze rookie Luke Rehfuss made a game-saving block in the red zone to force double overtime. The Breeze went on to hold on their lone possession of the sudden-death period, coming away with a 22-21 win.

Both meetings between the two teams this season have been one-goal Breeze wins, and all four of the Flyers losses this year have come by exactly one goal; Raleigh could very easily be undefeated had a few more plays gone their way.

Raleigh truly hasn’t played a ‘bad’ offensive game all season. They’re one of just two teams in the league that has never committed 20 turnovers in a single game, and their offensive conversion rate has never fallen below 50 percent. The offense has run on the strength of a versatile cutting core that features Anders Juengst, Allan Laviolette, Henry Fisher, and Jacob Fairfax, a group that ranked first through fourth, respectively, for the Flyers in total scores. All four possess throws to continue the disc through the intermediate area of the field, with Laviolette and Juengst complementing each other as primary underneath cutters while Fisher and Fairfax excel further downfield.

As of Friday morning, Fairfax is listed as questionable to play with a hamstring injury. If he’s unable to go, Eric Taylor is a good bet to play more offense than he has in recent weeks. Taylor, who is arguably the team’s best all-around player, has seen a recent switch over to defense, playing the majority of his points on the D-line the past two games for the first time in his career. He had just 70 total yards against the Breeze in Week 12, but when he’s played full-time offense, he’s shown the ability to take over games; Taylor has totaled over 400 yards in four of the five games where he’s played double digit O-points, averaging six scores per game.

The Breeze handler core of Jonny Malks, Rowan McDonnell, and Gus Norrbom should add back another key component this week, as Zach Norrbom carries a probable designation into tonight’s game. Zach has missed the last two games with a hamstring injury and has played just eight full games all season, though he’s been one of the most efficient handlers on the team when active. In those eight games, Norrbom has averaged over four scores, 40 completions at a 98.1 percent completion rate, and over 300 total yards per game. No Breeze handler averages more scores per game, and only Malks averages more yards.

Rowan could benefit greatly from Norrbom’s re-addition to the lineup. Over the past three weeks, McDonnell has averaged over 150 receiving yards per game after failing to reach 150 in any of his first nine games. Seemingly no longer constrained to the Breeze backfield, Norrbom’s presence should give Rowan even more freedom to work in and out of handler sets; we could see him start to return more to his 2018 MVP form for the postseason. His potential 2021 coming out party really couldn’t come against a better opponent, as Rowan’s two highest yardage totals of the season came against Raleigh, and this is a team he notably torched for 12 scores in 2018 to launch his MVP campaign.

In a game likely to be decided by a single goal for the third time this season, every point matters, and every turnover will be magnified among the two most efficient offenses in the league. We’ve seen both teams show an ability to close out games this season; making plays when they matter most is sure to be the difference between winning and losing this game.