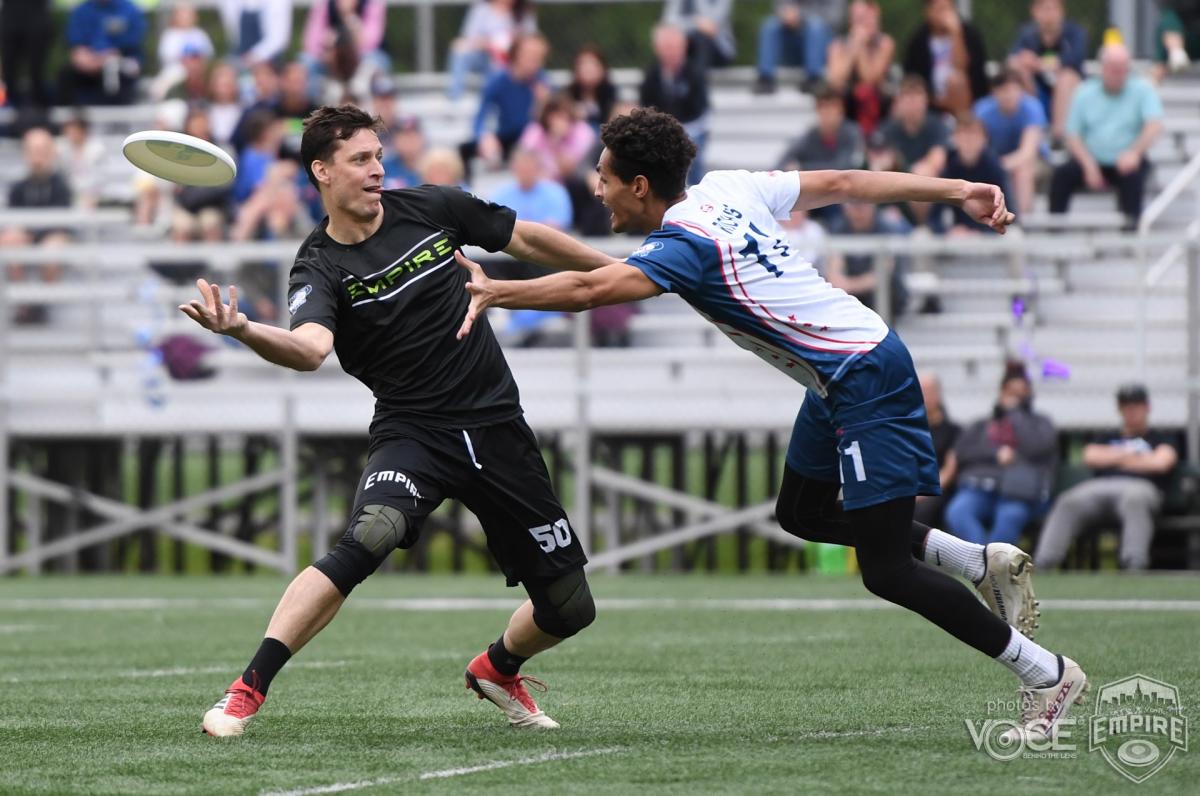 This Saturday, all AUDL fans can relive three 2019 thrillers that deliver a wild mix of drama, controversy, and shock-value. All three contests are decided by the smallest possible margin, as three of the league’s marquee franchises get tested on their home fields against sizable underdogs. Looking back, this particular AUDL weekend really helped define the character of the 2019 season, with such narrow gaps separating teams from victory and defeat on a consistent basis. Trust me when I tell you that there’s plenty of fascinating storylines to digest in this upcoming AUDL Retro tripleheader. 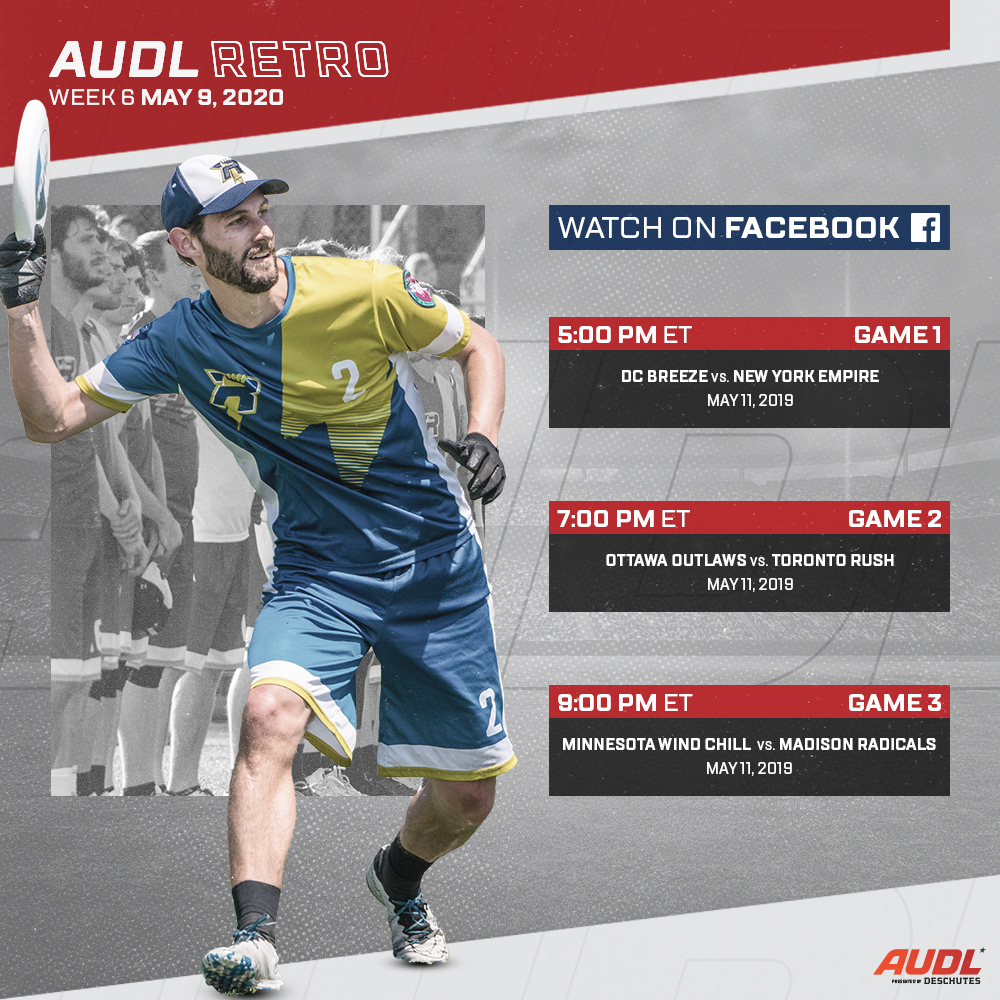 This Breeze-Empire battle lives on as another crazy chapter of this long-time East Division rivalry. Each franchise has had the upper-hand at various times throughout the series history, while the team that happened to be the underdog seemingly always found a way to make it super tough on the favorite. Certainly, familiarity between personnel, schemes, and tendencies have made most of these DC-New York showdowns feel like tricky chess matches, a dynamic that had renewed vigor in 2019 as friends and rivals Bryan Jones and Darryl Stanley coached against once another in the AUDL for the first time. In this particular game, offenses grooved early before the pressure ratcheted up late, with defenses delivering some game-defining stops in the most critical moments. There’s no question that the DC Breeze put a ton of responsibility on the shoulders of the reigning league MVP, Rowan McDonnell, who accumulated seven goals and five assists while playing a game-high 39 points, six more than any of his teammates. Of course, the guy who would eventually win MVP honors in this particular season was arguably relied on even more, and Ben Jagt delivered a whopping eight-goal, nine-assist performance in his 37 points played for the New York Empire. Additionally, Jagt’s +15 turned out to be nine higher than the next best plus/minus among his teammates. Beyond the Rowan/Jagt shootout, Nate Prior and Harper Garvey racked up huge completion numbers for their respective teams, while Garrett Braun and Ben Katz each made several clutch plays throughout the game, which required slightly more than 53 minutes of game action to complete. And though the decisive climactic point unfortunately became marred by controversy, players from both teams reflected that the value of the battle far exceeded the somewhat looney sequence that ultimately led to the end result.

On most weekends, this Outlaws-Rush contest, with its twists and turns and heart-stopping finish at the final buzzer, would have easily been considered as the marquee story of the weekend. Retrospectively, it was nuts how wild last year’s Week 6 turned out to be. Heading into this battle, there could not have been many who would’ve forecasted the Ottawa Outlaws taking the Toronto Rush to the brink. After all, the Outlaws had never before beaten the Rush. Futhermore, looking closer at the history, the average difference between the two teams was 7.8 goals per game over 13 previous meetings, five of which were double-digit blowouts. But in another example of the 2019 season’s crazy competitiveness, the Outlaws did not looked hugely overmatched at any point in this battle. In fact, Ottawa’s Alec Arsenault may have been the most dominant player on the field, erupting for a career-high 10 goals. Another interesting wrinkle was certainly former Rush taking it to their old team, as Greg Ellis, Jeff Lindquist, and Karl Loiseau combined for 12 assists and six goals. With four minutes remaining in the game, the Outlaws had a multi-goal lead and their first ever victory over Toronto very much within their grasp. Of course, Cam Harris has not changed teams yet, and with his presence the Rush fought back late, capitalizing on a couple key Outlaws’ errors down the stretch. With the game tied in the final seconds, the Rush relied on Harris again, with the all-star cutter unsurprisingly coming through in the clutch.

People may forget that the Madison Radicals, despite missing the playoffs for the first time in franchise history last year, still started their season strong. The Radicals were undefeated at 2-0 entering this mid-May matchup with the rival Minnesota Wind Chill, and those two triumphs came by a combined 11 goals against the two teams that would eventually meet in the Midwest title game. All that’s to say, the Radicals were still considered comfortable favorites heading into this Wind Chill contest at Breese Stevens Field. And, by the way, Madison had not lost a divisional game at home in about six years, entering the night with 46 straight victories against Midwest foes on their home turf. When the game began and the Radicals immediately jumped in front 2-0, it frankly felt like AUDL deja vu, inevitably leading to another routine Madison win. Of course, as has been the theme of this tripleheader, this would become another expectation-shattering experience, as the Wind Chill quickly fought back and created a nailbiter for four quarters. In fact, this particular Game of the Week—with Ian Toner and yours truly on the call—featured ties at the end of the first, second, and third, though unlike the aforementioned East Division action, we actually witnessed some shocking separation in the final period in Madison, with several unsung heroes stepping up in unbelievable ways. Most notably, Wind Chill rookie Josh Poterack, making his AUDL debut, delivered one of the most athletic blocks of the night, the type of play that immediately felt special. And it certainly qualified as a critical turning-point, both in the game and in the Radicals’ season.