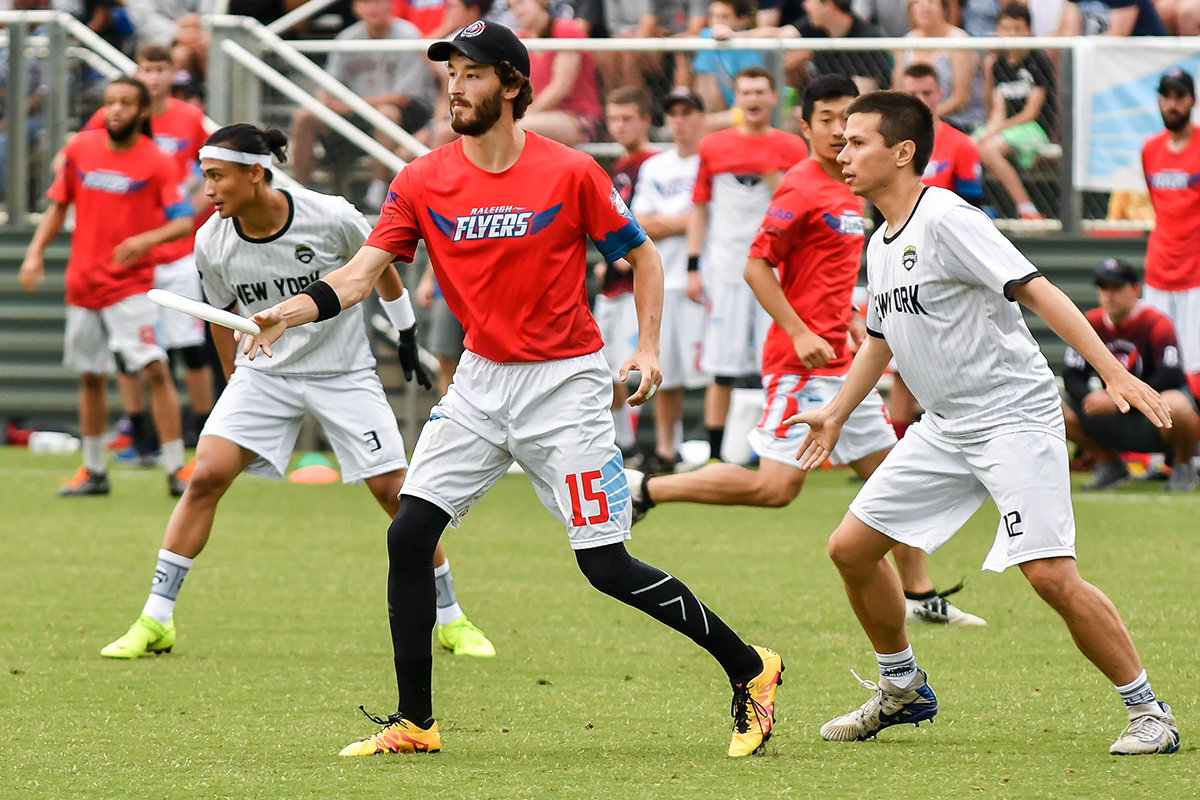 The impact Eric Taylor had on the Raleigh Flyers offense last season cannot be overstated. One of their go-to handlers from Week 1, Taylor helped lead the Flyers to finish as the fifth most efficient offense with the highest team completion percentage in the league. He sees the field like a veteran, emphasizing disc security and 100 percent throws while still showing a willingness to huck when the opportunity is there.

In the first game of the season against the Dallas Roughnecks, Taylor showed a consistent ability to help the team wherever he was needed. He facilitated a very fluid Flyers offense, demonstrating an awareness to adapt mid-point and take on various roles in the system.

The above sequence starts with Taylor attempting a strike cut for teammate Allan Laviolette as the Flyers approach the end zone. Opting for a swing to Henry Fisher, Taylor makes the smart decision to clear into the stack to keep the underneath space free. Here, Taylor lingers at the front of the stack, waiting for an opportunity to give his handlers a downfield option. After some handler motion between Fisher and Laviolette and a swing to the break side, Taylor sees the opportunity and cuts across the field for a wide open 12-yard completion. Now with the disc, Taylor uses a quick give-and-go to change the offense’s angle of attack while Fisher motions back into the stack. A well-timed cut from Fisher leads to Taylor tossing an easy 10-yard flick for the goal.

Now of course, this clip is just as much a highlight for Fisher as it is for Taylor, with both showing their versatility as handlers and cutters. What impresses me most about Taylor is his ability to stay calm and adapt to any situation. Forced out of the handler set on the above play, Taylor knows he doesn’t need to be a playmaker for his offense to be successful in this spot. He merely waits for his opportunity, makes a smart cut for the continuation, and ends up tossing an easy assist.

He does what’s needed, whether it’s creating space for other handlers, or making crazy athletic layouts to bail out a stalled offense. As evidenced by his 410 completions and 16 throwaways in 2019, Taylor values every possession and knows he doesn’t need to be a playmaker on every point, nor every throw. He led the league in completions per game last year with 58.6; by comparison, that was over 13 completions per game more than the next closest Flyer.