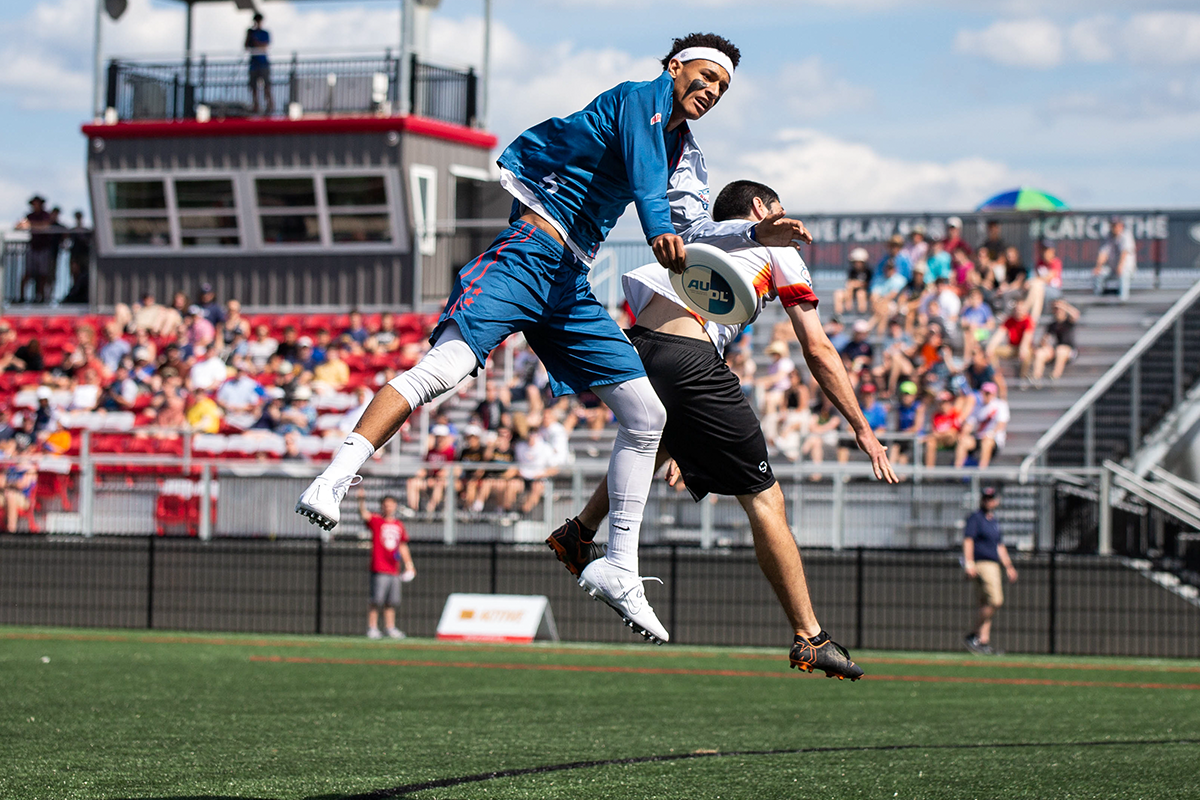 AJ Merriman was one of several impact rookies for the DC Breeze in 2019. With his blend of springy height, athleticism, and contagious energy, Merriman made plays all season long, regularly skying over opponents and rejuvenating his team when most needed.

One of his key games came against the Montreal Royal in the second game of a double-header road trip in Week 7.

Just before halftime in an 8-7 game — to this point no team had held more than a one-goal lead — the Royal received the pull and were looking for the tie. Around midfield, Montreal’s Sacha Poitte-Sokolsky floats a high backhand behind cutter Mathieu Bosser, who’s defended by Merriman. Attacking the air space, Merriman rises up over the back of Bosser to grab the disc with two hands, landing hard on his back as he makes the catch through contact. But the fall is nothing for the 19-year-old playmaker, and he pops back up immediately to find teammate Kris Harrison for the dump, who then swings it to defensive captain David Bloodgood. After getting rid of the disc, Merriman clears out hard and, realizing that he can out-hustle his defender, continues his cut into the open deep space towards the end zone. Bloodgood tosses a beautiful leading backhand, and Merriman’s well-timed cut is rewarded with a goal.

Merriman finished the game with three blocks, tied for a single-game high among all Breeze players in 2019. He injects a youthful spark into the Breeze defense, consistently providing energy to a D-line that was lacking a clear identity coming into the season. While he thrived as playmaking defender, Merriman had no problem contributing on offense off turnovers. Transition offense was as big a part of his game as creating turnovers, and he showed it from his first game of the season.

Including playoffs, Merriman contributed six assists, nine goals, and 12 blocks (tied for the team lead) on 164 D-points played (second most on the team) in his rookie season. His +18 plus/minus was seventh best on the Breeze despite touching the disc only 49 times on offense all season.

While there’s room for improvement — Merriman had six throwaways on just 37 attempts — the Breeze have to be thrilled with what Merriman brought to the table in 2019. Continuing to play alongside 2018 MVP Rowan McDonnell is going to be huge for Merriman’s development; this is only the beginning for the 19-year-old.