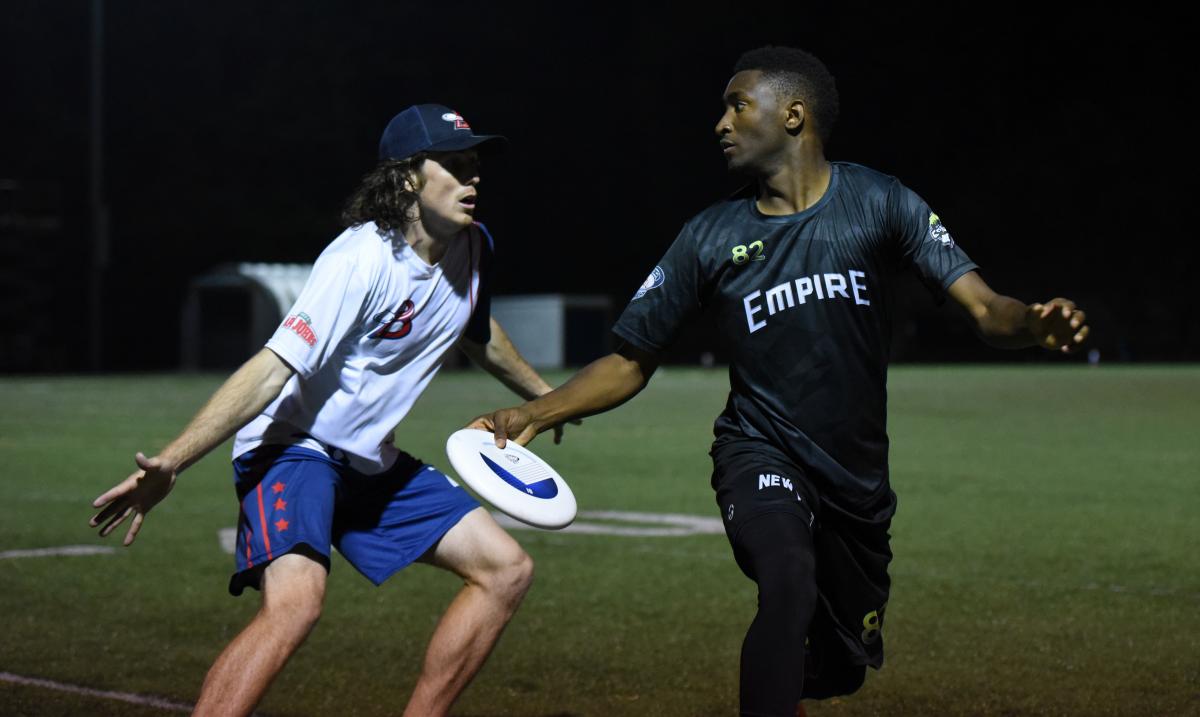 1. Second In The East

It feels preposterous to admit, but the Philadelphia Phoenix are a very legitimate contender for second place in the East Division. If they manage to overcome the New York Empire at home this Saturday, the Phoenix have to be considered the division’s best challenger to the Toronto Rush.

Both teams will be at relatively full strength. New York will be without receiver Conor Kline, but almost all their major pieces. New York has one of the most talented teams in the league, and unlike in years past, the the talent seems to be rising to meet expectations.

Beau Kittredge has played in all three games for New York, putting in most of his time on the offense. He’s been incredibly versatile, throwing more assists (6) than goals (5), and even ranking fourth on the team in blocks (4), despite so few chances to play on the defense. Kittredge has shown impressive chemistry with star handler Harper Garvey. That Kittredge has thrown more passes to Garvey than vice versa shows that New York has primarily used Kittredge as an initiation cutter and occasional off-handler; his deep cutting is a break-in-case-of-emergency weapon that New York has yet to deploy this season.

Marques Brownlee has been an impressive addition to the defense. He exploded against Ottawa a couple weeks back, notching 2 assists, 3 goals, and 2 Ds. He’s also slotted in as the primary puller on the defense because of his monster arm. With his athleticism in the air and on the ground, Brownlee can threaten an opposing offense anywhere on the field, with or without the disc.

New York has as much athleticism as anyone in the league, adding Kittredge and Brownlee to an already strong core anchored by Ben Jagt and Jeff Babbitt. Athleticism can only take you so far, though, and the team doesn’t have many big-huck throwers other than Garvey. He’s greatly improved his decision-making on the season, upping his completion percentage from 91 in 2017 to 93 percent in 2018. More importantly, he had more throwaways (46) than assists (33) in 2017; he has an equal 10 in both categories so far in 2018. Those numbers may seem low for the main handler on a winning team, but New York has embraced its status as a team that wins through defense and teamwork. It’s working so far.

Philadelphia is also thriving due to the combination of new additions with old heads. Ethan Peck (25 assists, 13 goals) and Sean Mott (21 assists, 14 goals) have supercharged the Phoenix offense with their playmaking. Player/Coach Trey Katzenbach freely admits that Peck has become the team’s best player. They’re both deadly anywhere on the field.

Those two offensive stars are flanked by a pair of terrific supporting stars. Scott Xu is a terrific possession handler who can squeeze a disc anywhere in a tight space. Himalaya Mehta has been phenomenal on the season, leading his team in goals with 22 in his rookie year. In fact, he’s tied for third overall in the league.

Philadelphia’s success is defined by those four to a much greater extent than New York by its top players. Philadelphia lost a disappointing game – though on the second leg of a two-game road trip – to Ottawa, in part because Mott and Peck combined for eight throwaways. New York’s athletic defense will look to frustrate the Phoenix’s stars. My money is on the Empire, but Philadelphia has been ruining AUDL pick’em bets all year. If they manage to defeat Beau and co., Toronto has a clear-cut challenger in the East.

In the West, the San Jose Spiders and San Francisco FlameThrowers will play each other for the third time already on the season. That’s as many games as the Toronto Rush have played total! 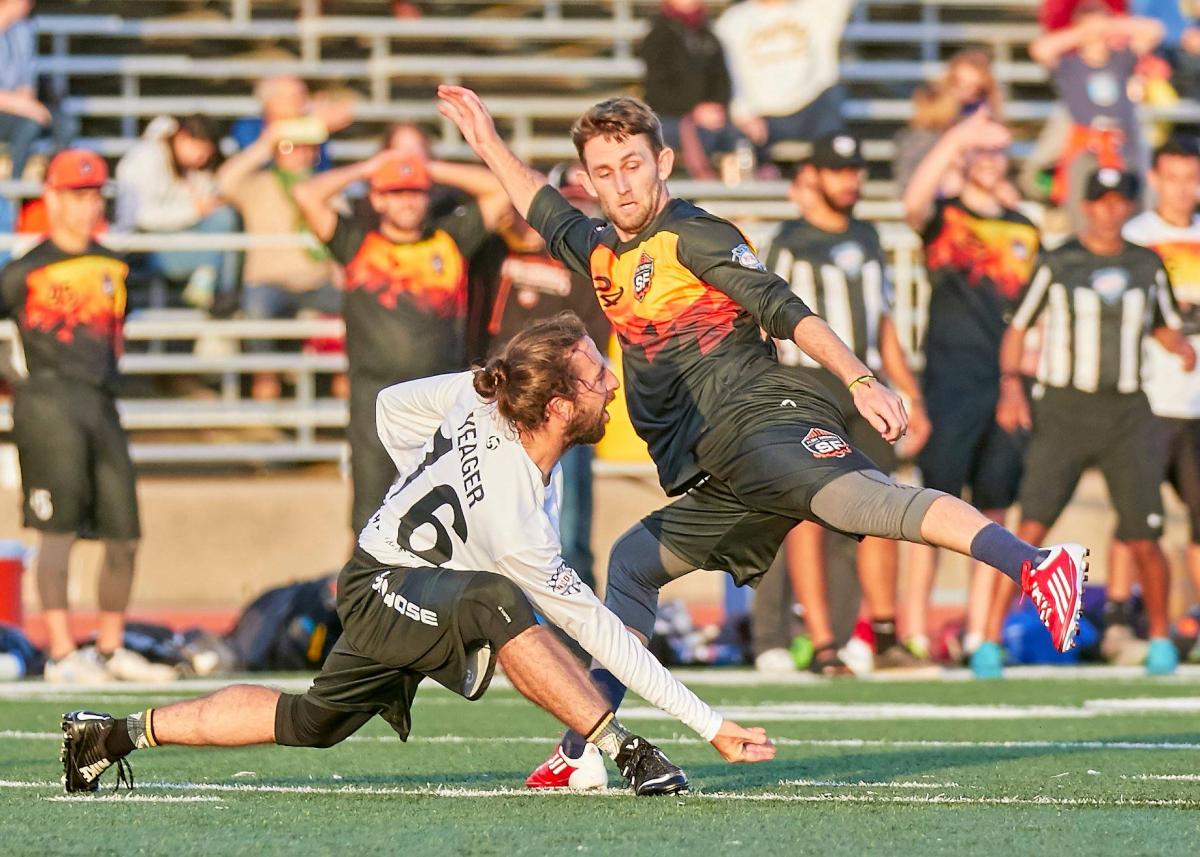 Since the two teams split their home-and-home series to start the season with an even point differential, both teams have surprisingly plummeted to the bottom of the standings in the West. San Jose (2-4) and San Francisco (1-4) are bringing up the rear in the division, but I expected both teams to compete with Los Angeles for the right to represent the West in Madison for Championship Weekend. They have had tough schedules and tougher losses. Both teams are coming off of two-point losses this past weekend that stung.

Although San Francisco got a big game from Eli Kerns (seven assists), the FlameThrowers obviously missed offensive playmakers Elliott Chartock and Antoine Davis in their loss to Seattle. Chartock has been great so far in his rookie season, ranking seventh in the AUDL in completions per game (58.3/game), and Davis earned Player of the Week honors back in Week 3. San Francisco does not have the depth of past years, and the team has trouble coping when its best players aren’t available.

San Jose lost a close game to Los Angeles only a few weeks after losing to the Aviators in a massacre. Both games were close at halftime before the Aviators pulled away from the Spiders in the third quarters. Sonny Zaccaro was in the zone as he has been for much of the season, and Zach Sabin had breakout performances as a deep receiver with 11 goals in two games.

When the two teams played to start the season, neither had a clear-cut idea of their preferred gameplans. Both have learned what works and what doesn’t since then, and the level of play this weekend should be higher than it was in the opening two games. The two teams are quite evenly matched, and both should be close to full-strength. Even though I doubt they will remain in the basement of the West for long, one of the two will continue their slump with a loss this weekend.

Two of the strongest teams in the league will have another chance to face off, after the last game ended in a thrilling overtime between the Dallas Roughnecks and Austin Sol. Dallas was able to triumph despite their offense not starting a point during the extra frame. They won due to some terrific playmaking on defense from Jay Froude, Noah Chambers, Kai Marshall, and Ben Rogers.

Austin had until recently been one of the most consistent teams in the AUDL. Their only loss had come at the hands of Dallas, while Austin had defeated the Los Angeles Aviators, the Raleigh Flyers, and the Atlanta Hustle, all in close games. Then last weekend, Austin went and lost to the Nashville NightWatch, who won their first game in 666 days.

So what to expect? Austin made a variety of uncharacteristic mental mistakes, much of it likely due to the fatigue of a long and grueling game against Atlanta. Credit of course must also be given to the Nashville defense, which flew around the field with reckless abandon all game. Austin’s loss is certainly more of a blip than a definitive moment for the team, and they will come out strong and hungry against Dallas. Austin now has last week’s stinker, as well as their early-season loss to Dallas, to avenge.

Dallas is also coming off of a loss to the Raleigh Flyers, the only blemish to their record this season. Dallas coach Wes Nemec tried some creative roster moves to gain some traction in the game, including playing Brandon Malecek on the D-Line for some of the game. Nothing worked as Jonathan Helton and Jack Williams were unstoppable.

The story of the first game between Austin and Dallas was the Dallas D-Line. Six defenders recorded more than one block, with youngster Noah Chambers (4) and veteran Zach Riggins (3) leading the way. It was only fitting that Dallas’ defense would win the game in overtime.

Both teams will be without important pieces. Offensive cutters Kiran Thomas and Mike Natenberg will be unavailable for Austin, while offensive Swiss-Army Knives Chris LaRocque and Thomas Slack won’t be playing for Dallas. That doesn’t change my expectations that this will be another nail-biter. Barring Austin’s loss to Nashville, these two teams have been among the most consistent performers of the 2018 season. I could watch Austin and Dallas play fourteen games, and I would be happy. I’ll have to settle for four, with two more remaining after this weekend’s game.

4. Interdivisional Game Of The Week

Raleigh will play yet another AUDL Game of the Week on Stadium, this time against a team from the East, the DC Breeze. The Breeze are a disappointing 1-2-1 after a 2017 season that saw the team solidify itself as Toronto’s foremost threat in the East. They will still be a challenge for Raleigh, especially playing at home where they’ve lost just once in two seasons. These two teams played in 2017, and it took a five-goal Flyers comeback at home to stave off the Breeze.

Rowan McDonnell has emerged as the face of the DC franchise in 2018, leading the team in points played, assists, goals, and third on the team in Ds. If DC wants to put up a fight, they will need another monster performance from their do-everything captain.

Blake’s 2018 campaign has been on par with his terrific rookie year. The handler is 6’5”, which allows him access to the break side seemingly at will. His number of completions per game have dropped slightly from 2017, but Blake remains dangerous whenever the disc enters his hands.

Approximately two-thirds of his total points played in 2018 have come alongside McDonnell, after only playing one-quarter of his points alongside the star in 2017. Blake will be the focal point of the Breeze offense.

Raleigh will finally have another game in which Jonathan Nethercutt and Mischa Freystaetter get to play together. Though Raleigh has already played seven games on the season, their two highest-profile stars have only played 33 points together. Every scrap of experience together before the playoffs will be vital.