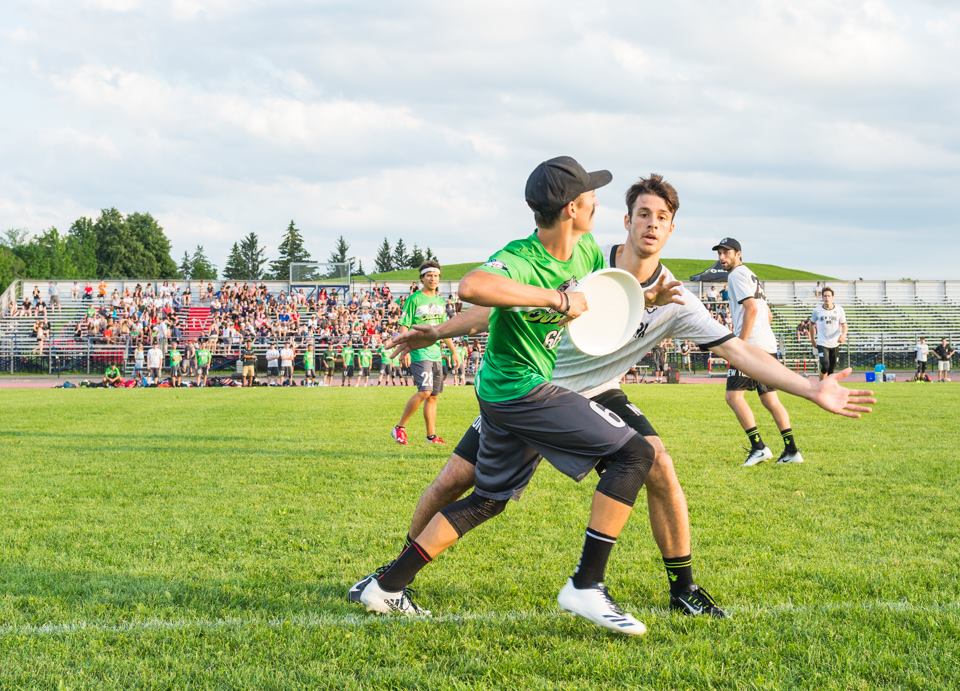 The Ottawa Outlaws have a handful of elite players who can compete with anyone in the league. Derek Alexander is a spectacular thrower. Alec Arsenault is a terrifying athlete at the cutting position who can leap over anyone, with excellent timing to boot. Mike Lee is returning from an ACL injury, and he’s another dangerous cutter capable of breaking free in the endzone at will. All three have the talent and opportunity to score 80+ points in a season. Yet, the three stars will not determine Ottawa’s success in 2018.

Ottawa is working hard to develop its depth. In past years, the veteran O-Line would run drills alone, and the team has told me that this will no longer be the case. The youth needs to learn how to step into larger roles.

“We weren't developing the depth of the team, we weren't supporting newer players,” Head Coach Hadrian Mertins-Kirkwood told me.

Kinley Gee is an example of a success story. He popped last year, increasing his goal totals in his three AUDL seasons from 1 to 22 to 34. After showing out as one of Team Canada’s handlers at U24s in Perth, he is wholly capable of increased responsibly. Who else will step up for Ottawa?

The team has been working in the gym multiple times a week, and that hard work combined with the youthfulness of the roster should allow Ottawa to handle its weekend. The Outlaws will play on Saturday in New York against the resurgent New York Empire before traveling to DC on Sunday to play against the DC Breeze. Both teams are winless and hungry. Ottawa is confident they will improve on their two-win 2017, but there are no easy wins in the East, especially after the Philadelphia Phoenix proved they could hang with the Toronto Rush. Ottawa will need to upset some expectations this weekend to fulfill their confidence, and the team’s wins will be delivered from the middle and bottom of the roster, not the top.

We still have no idea. A game between two hopefuls will take place on Sunday, with the San Jose Spiders visiting the Los Angeles Aviators. San Jose held pace with the defending champion San Francisco FlameThrowers in their first two games of 2018, splitting the series 1-1. Though Spiders coach Tyler Grant knows one win is nothing to scoff at, he is disappointed that they didn’t win both.

San Jose has shown to be a slightly different team from years past. Though they have a number of returning players, there are always differences from years past. Sonny Zaccaro has stepped into a larger role and performed admirably.

Nick Murphy has played terrifically after being a practice player for the squad in 2017.

“Nick has really stepped up,” said Grant. “He's been very consistent in getting open, and very hard to cover. He's done a pretty good job of moving the offense along.”

Sam Kunz, a rookie out of college, was electric on the D-Line in his one game, recording a tremendous five blocks and two assists in only 12 points played.

The Spiders have shifted star handler Justin Norden to the D-Line for many of his points. With so much throwing talent in town, Grant decided that Norden was a good bet to ensure any turns created by the defense could be punched in for breaks.

“He also showed last year that when he was on offense and we happened to turn the disc over, he was one of those guys that was getting it back for us,” said Grant. Norden’s throwing combined with his defense give the Spiders a huge advantage in the game.

Grant doesn’t want you to fall into the trap of believing that this specific game will provide any answers.

“I wouldn't put a lot of weight on this game, yet,” Grant said. “It's early in the season, and I think even though it's a head-to-head matchup, and it's coming off of our last loss in playoffs, I wouldn't say that it's the 'stake a claim' type of game.”

Furthermore, San Jose will be far from full-strength, with stars Norden and Jackson Stearns unavailable. This one game between San Jose and Los Angeles won’t be the final say on anything.

Though Grant is confident in his team’s matchup against the Aviators, he isn’t yet ready with answers for the high-powered Los Angeles offense.

“We do have defenses that may be able to slow them down, but I think it's going to be an adjustment in game to figure that out,” Grant said. 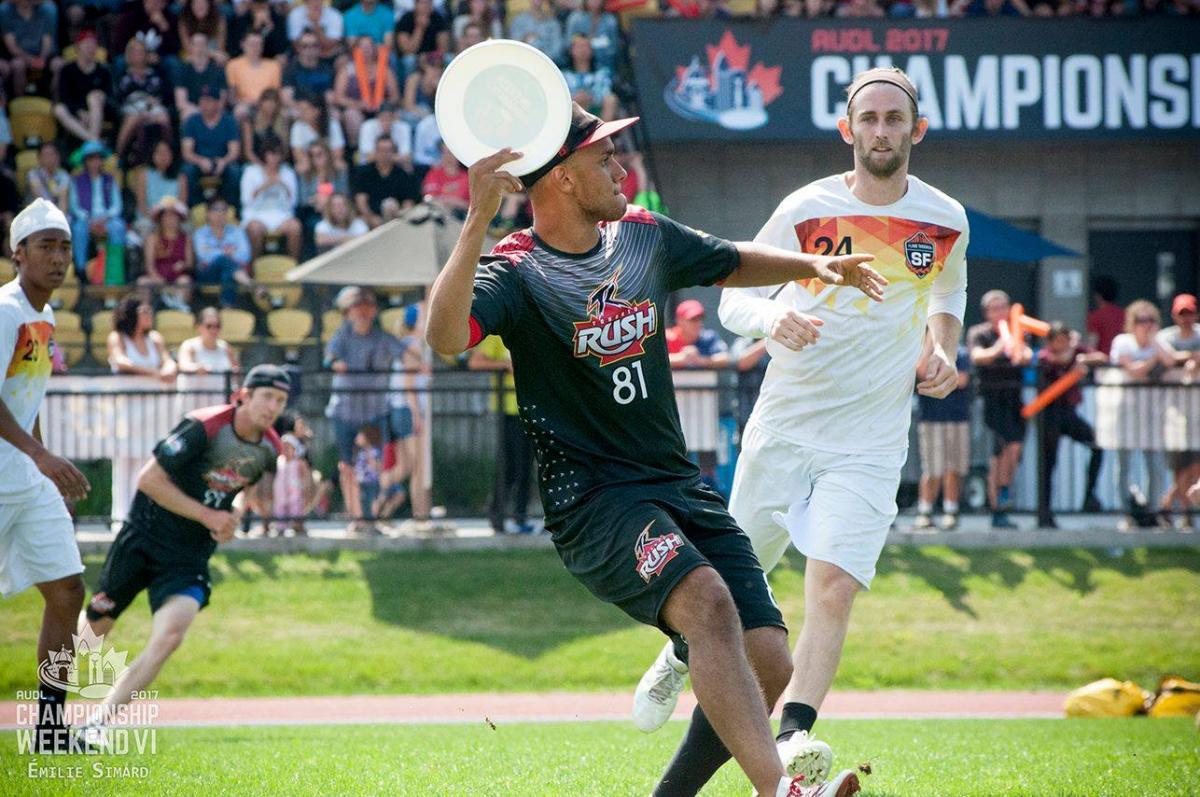 This game is, of course, one of the most exciting regular season games for the AUDL. I wrote about it at much greater length here. Neither team is talking this up as more than another regular season game, but I expect both have important reasons to care a little bit extra. First and foremost, this is both teams’ first ever Stadium game. For Toronto, they lost to San Francisco by one point in the finals last year, and revenge is best cold served on a disc-shaped dish (right? That’s how the expression goes?). The FlameThrowers want to prove they are still the cream of the AUDL, and what better way to show their continued strength than to again beat the Rush? I will be watching this game as closely as a pickpocket at a dinner party. Don't forget to tune in at 8:30 PM/ET on Stadium.

Only a few weeks into the season, the players with a claim to leading the AUDL in statistical categories have already separated themselves from the rest of their flatball-playing compatriots. Mark Burton stands head and shoulders ahead of the pack for assists, with an outrageous 17 in two games. The San Diego Growlers defense should allow Burton to continue that run, though they did hold the Seattle Cascades to zero fourth quarter points last week.

Josh Klane put up seven assists in Minnesota Wind Chill loss to Seattle. The Chicago Wildfire defense should be much stingier, especially as Chicago is looking to greatly slow down the game, leaving fewer total points in the contest for Klane to amass assists. He should still be able to put up numbers, as he tallied 63 assists in 2017. Another big game will keep him in the hunt.

In the goals category, a pair of Cascades are close to the lead. It’s almost like high-scoring games with lots of offensive holds allow offensive players to compile lots of stats! Cam Bailey (6.5) and Reed Hendrickson (6.0) are both dangerous downfield threats with a head of steam, and they can score in a hurry with Burton throwing to them. Elsewhere, Jacob Fairfax (6.0) and John Taylor (6.0) have been important offensive options for otherwise defensive oriented (thus far in the season) teams, for the Raleigh Flyers and Tampa Bay Cannons, respectively.

On the defensive end, Kelvin Williams has been a force for the Atlanta Hustle, collecting nine Ds in two games. The sure-handed handlers in Tampa Bay will be difficult to force into turnovers this week, but Williams’ athleticism can create a defensive chance out of nothing. After an injury-plagued 2017 season, Remi Ojo is finally healthy, and he made highlights with four Ds – including one Callahan – against the Empire in his only game.

This week’s team that needs to prove their success is the Philadelphia Phoenix. The Phoenix will play the Montreal Royal; the Phoenix and Royal finished 2017 with a 2-1 spread and +2-point differential, both in favour of Montreal. Montreal, however, added incredible talent in the off-season. This game will be another important test in the seemingly unpredictable East.

Philadelphia played a surprisingly close game against the Toronto Rush in their home opener, which many suspected to be a laugher. The game featured a gusty wind straight down one side of the field, which always helps shrink a talent gap. Regardless, the Phoenix were able to score multiple upwind breaks against a ferocious Rush defense. Is it a one-game anomaly? Are they actually so much better than last year, after posting a 4-10 record and having lost some talent? I want them to be! Prove it.