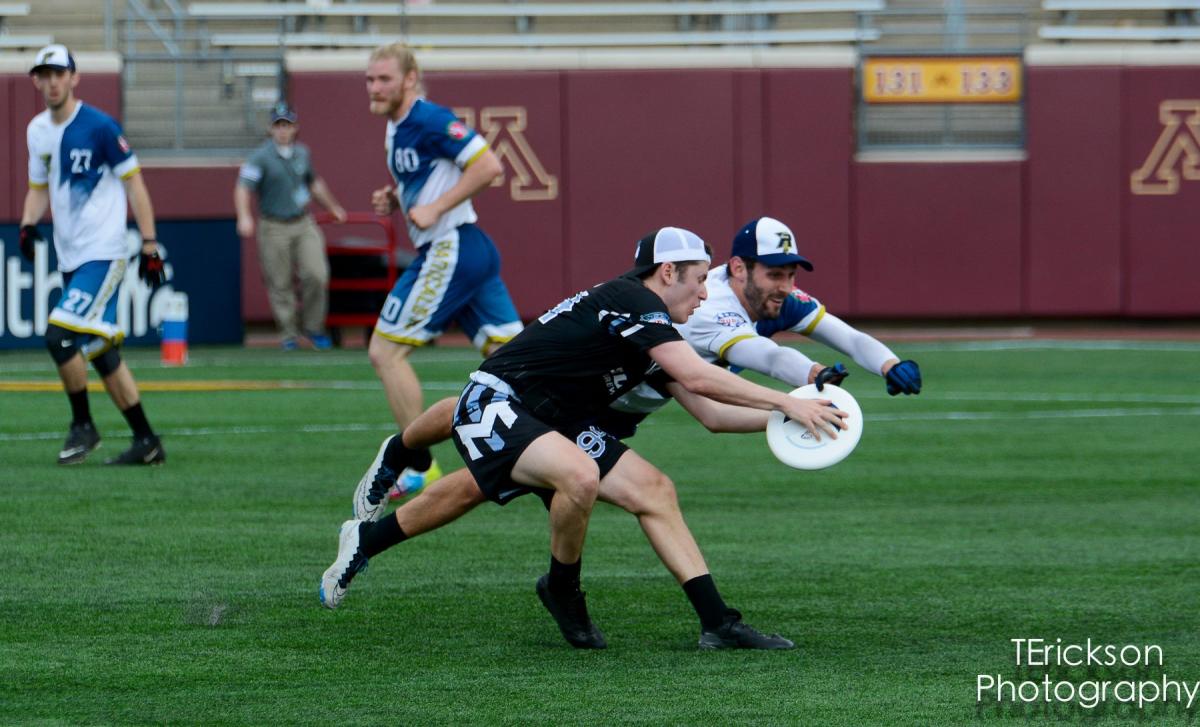 1. Madison On The Rebound

The Raleigh Flyers beat the Madison Radicals into an existential crisis nearly two weeks ago. Madison is one of the flagship franchises of the AUDL, and they’ve never before lost a game in such humiliating fashion or by such a wide margin.

The pain of the Raleigh loss bears some similarities to Madison’s loss to Seattle in the 2016 playoffs. Madison is once again searching for answers. But this time, they won't have a full season to find them.

Madison will immediately have to climb back on the proverbial horse starting tomorrow, facing divisional foes the Minnesota Wind Chill (5-2) and Chicago Wildfire (3-4) in a back-to-back, home-and-away weekend. The Radicals seem to know that beating other Midwest teams doesn’t prepare them for the hyper-talented and athletic rosters in other divisions, but they won’t have another chance to play a team the calibre of Raleigh until Championship Weekend, again in Madison this August. The predicament prompts some soul-searching.

“We've got to train our players to go pedal to the metal the entire time, and it doesn't matter who we are playing,” said Radicals defender Kevin Pettit-Scantling. “We just [need to] continue to crush. You just gotta continue to beat them, and beat them. We’re not going to beat the top teams by losing to the Midwest teams.”

In all probability, Madison will likely make it to Championship Weekend for a sixth straight season. They have as much top-tier talent as any other team in their division, with far more talent, athleticism, and depth in roster spots 5-30. They could lose both games on this weekend’s back-to-back, and it wouldn’t affect their likelihood to make the playoffs. If winning against Midwest teams doesn’t prepare Madison for teams with equal athleticism and talent, such as Raleigh, then what’s the point? Why do they keep pushing the boulder up the hill?

If Madison is indeed the toughest test in the Midwest, then the Radicals can use practice to simulate the environment of a game against teams like Raleigh or the Toronto Rush.

“Right now we're just focusing on practice,” explained Pettit-Scantling. “While we may not have the greatest record against outer-division teams, we do have talent on our roster who have put up great numbers against other divisions’ teams, and that means that we're doing something right. What we're trying to do is simulate that type of intensity, and that type of team play at practice.”

And like Pettit-Scantling observed, losing to divisional opponents sure doesn’t help prepare Madison for the Raleighs of the world.

Against Minnesota, Madison will face a team that in many ways mirrors its own. The Wind Chill have a steady stream of young athletes graduating into open rosters in the city, and the team’s success is based more on the system than individual players. Though Ryan Osgar is a focal point of the offence, and won All-AUDL Second Team honours in 2017, the team rolls along smoothly without him. Just last week, Minnesota beat the Indianapolis AlleyCats without Osgar, as Eric Johnson and Bryan Vohnoutka seamlessly stepped into his role as initiation cutters.

Against Chicago, Pettit-Scantling will likely guard Kurt Gibson again, as he had great success last time around with help from his teammates. The Radicals were constantly aware of Gibson on the field, always ready to help or switch. They never let him turn the corner on a catch or walk into a throw with forward momentum.

Madison pulled away in the second half of its game against Chicago, largely because the team threw Kyle Weigand onto Pawel Janas. Weigand’s springy athleticism bothered Janas. Weigand may not pop on the stats sheet, but he always seems to be where Madison needs him, and he’ll only improve, as he continues recovering from a shoulder injury.

Madison needs to rediscover its trust in its own style of play. Playing Minnesota and Chicago are opportunities to do just that. Playing some of the Midwest’s best teams may not prepare Madison for tests like Raleigh, but they should let the Radicals at least flex their muscles and regain their confidence in time for the playoffs.

Madison has been bringing a bottle of champagne to every practice and game. It’s traveled with the team. However, that loses some lustre after Madison loses a game. After the Raleigh game, the champagne was forgotten at Breese Stevens Field, overlooked due to worries over the team’s actual performance.

“I left the champagne at the field at the Raleigh game, and Tim picked it up,” said Pettit-Scantling. “I haven't picked it up from him since, and it feels like a part of me is missing.”

What a weird, strange trip it’s been for the Austin Sol. Just in 2018, they’ve beaten two of the best five teams in the league in the Flyers and Los Angeles Aviators. They’ve lost twice to the Nashville NightWatch, who have won as many games in 2018 as they had in 2016 and 2017 combined. Admittedly, Nashville is a much better and more cohesive team than in years past, but the point remains true: The Sol are an enigma this year.

The Dallas Roughnecks are going into this weekend’s game against a Sol team that has a wider range of potential performance than any other in the league. At their best, Austin can hang with any team in the world. That’s the only evaluation of Austin that Dallas Head Coach Wes Nemec cares about.

“I don't really [buy] into the idea that, oh, Austin's a beatable team, or oh, they suck now. That's just foolish, to be honest,” said Nemec. Keep in mind that Dallas has never lost to Austin in nearly three full seasons of play. Still, that doesn't make the result in this weekend's Texas showdown any more certain.

To add further fog in the game between Dallas and Austin, the Roughnecks will be missing a variety of rotation players. They haven’t yet had a fully healthy and available roster, and this weekend will be no different. Dan Emmons and Kai Marshall will be unavailable due to hamstring issues. Kaplan Maurer will be sidelined by his ankle, and Sam Ward by his hip. Dallas is used to moving its pieces around, and Chris LaRocque will likely be moved back to the position of an offensive hub after moonlighting as a defensive quarterback.

“We're fortunate Chris is a versatile player, and he's actually a really good defender,” said Nemec in explaining why LaRocque joined the defense during their two-game road trip last weekend.

“We were looking for just a really solid anchor for our defensive line, and our O-line was pretty well staffed with [Brandon Malecek] and [Matt Jackson] and Dalton [Smith]… Chris was an easy plug-in, actually. He's a great small ball guy. He's a great distributor, deep D. It just made sense to throw a him on the D-Line, and he's happy to do it. Less a matter of comfort, and more the matter of putting the right player in the right spot to help out on the line.”

With fewer throwers available to the offense this week, the right spot for LaRocque may well be on the offense. After dominating in Dallas’ first game against Raleigh, LaRocque hasn’t yet returned to the offence. Austin should be a good opportunity, as Austin’s defence is slightly banged up and captain Michael Matthis not yet fully healthy.

No matter the personnel available to either team, Dallas knows not to take Austin lightly.

“Austin, they've had some recent struggles, but I still consider them a very good team,” said Nemec. “I think this is probably the strongest team they've been in their history so far. They're super good, and I have all the respect in the world for what they're capable of.”